The taking of Fort Toulbroc'h, Brittany, France by the 5th Rangers 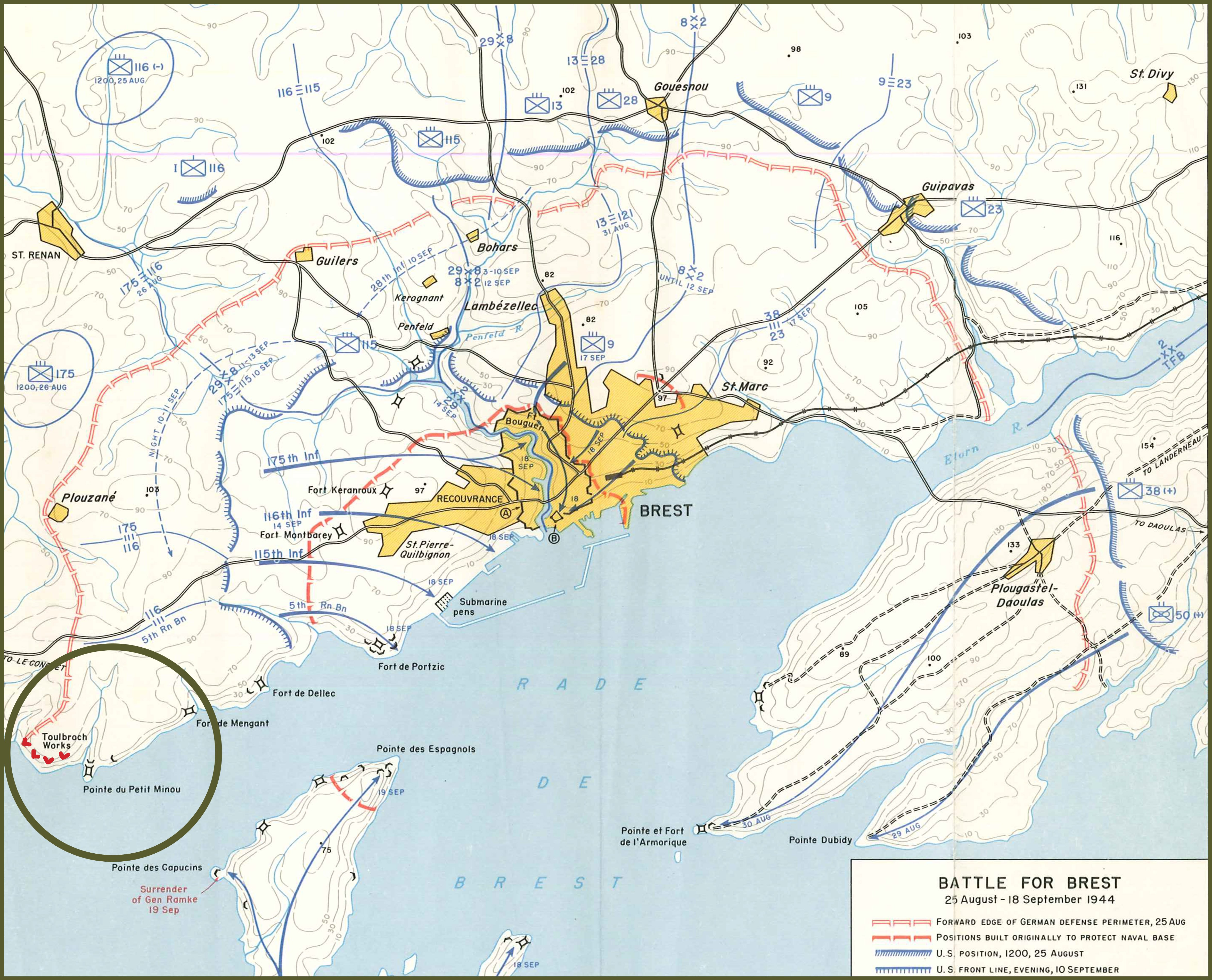 The Rangers had the mission to seize the medieval Toulbroc’h Fort, south of the village of Plouzané, Brittany. 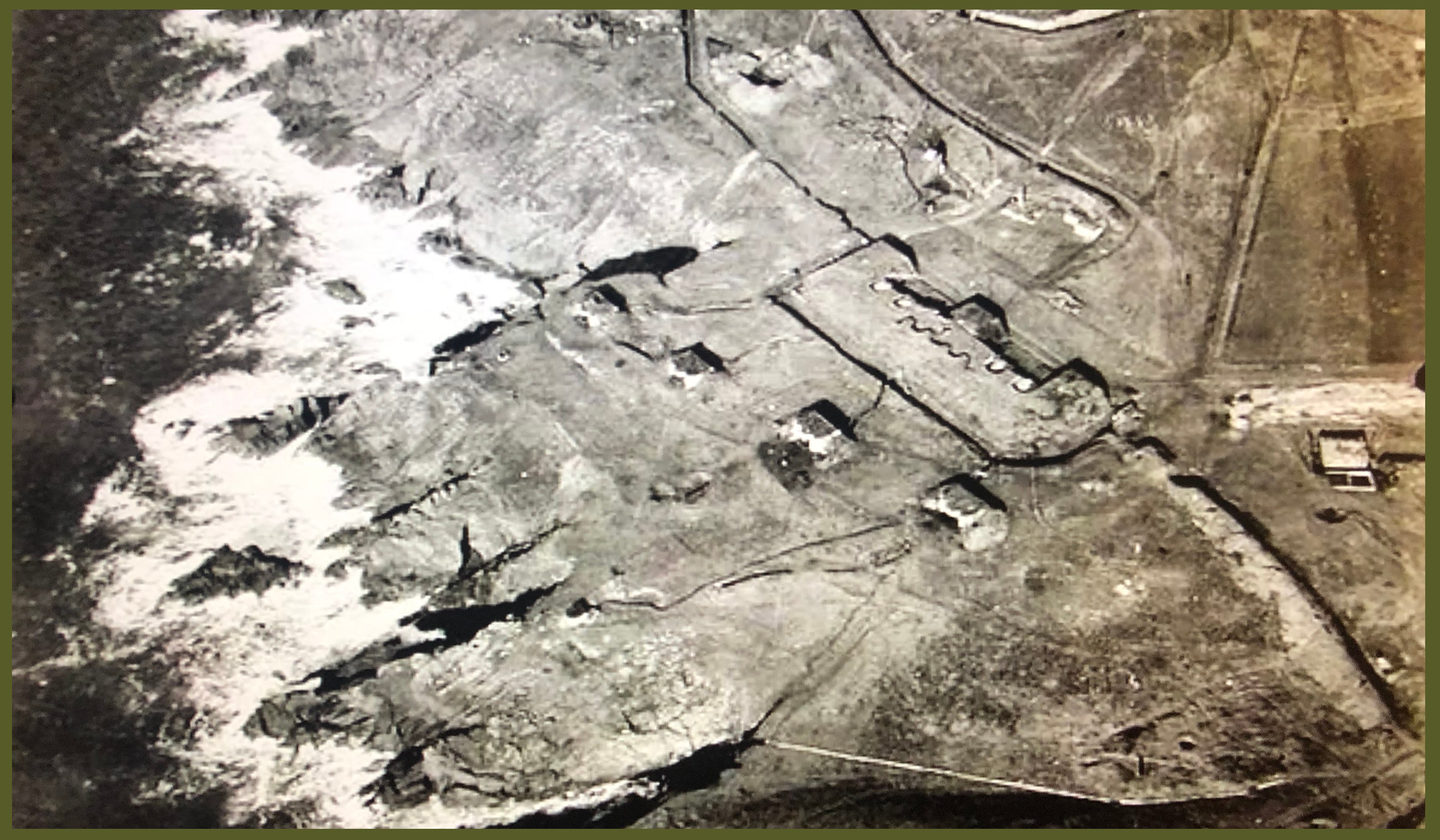 The Rangers, with Companies “B”, “D” and “F” were ordered to straighten the front line.

To do so, they took position on the 29th Infantry Division right flank to keep contact with the 116th Infantry Regiment. Each Ranger’s Company had a specific mission:

The 2nd Platoon of Company “B” commanded by Lieutenant Louis J. Gambosi made a reconnaissance north of the Fort.

This reconnaissance allowed Lieutenant Stanley L. Askin from Company “D” to attack by the south with one platoon, the other platoons remained as Battalion Reserve.

Lieutenant Askin’s men moved out into stiff resistance from small arms and automatic fire then continued to make headway. Lieutenant Gambosi who was on the North of the Fort asked permission to attack as no Germans were in view. The progress was slow, nearby 30 minutes elapsed before the men encountered the enemy with a strength of ten to one.

Lieutenant Gambosi withdrew and reinforcements from Battalion Reserve to stop the enemy counterattacks were brought.

The night was a nightmare for the three Rangers companies, the Germans counterattacked everywhere, the situation was so critical that Major Sullivan asked by radio to send all men available.

Cooks, drivers, clerks and even typist were sent to the frontline to help the Rangers! 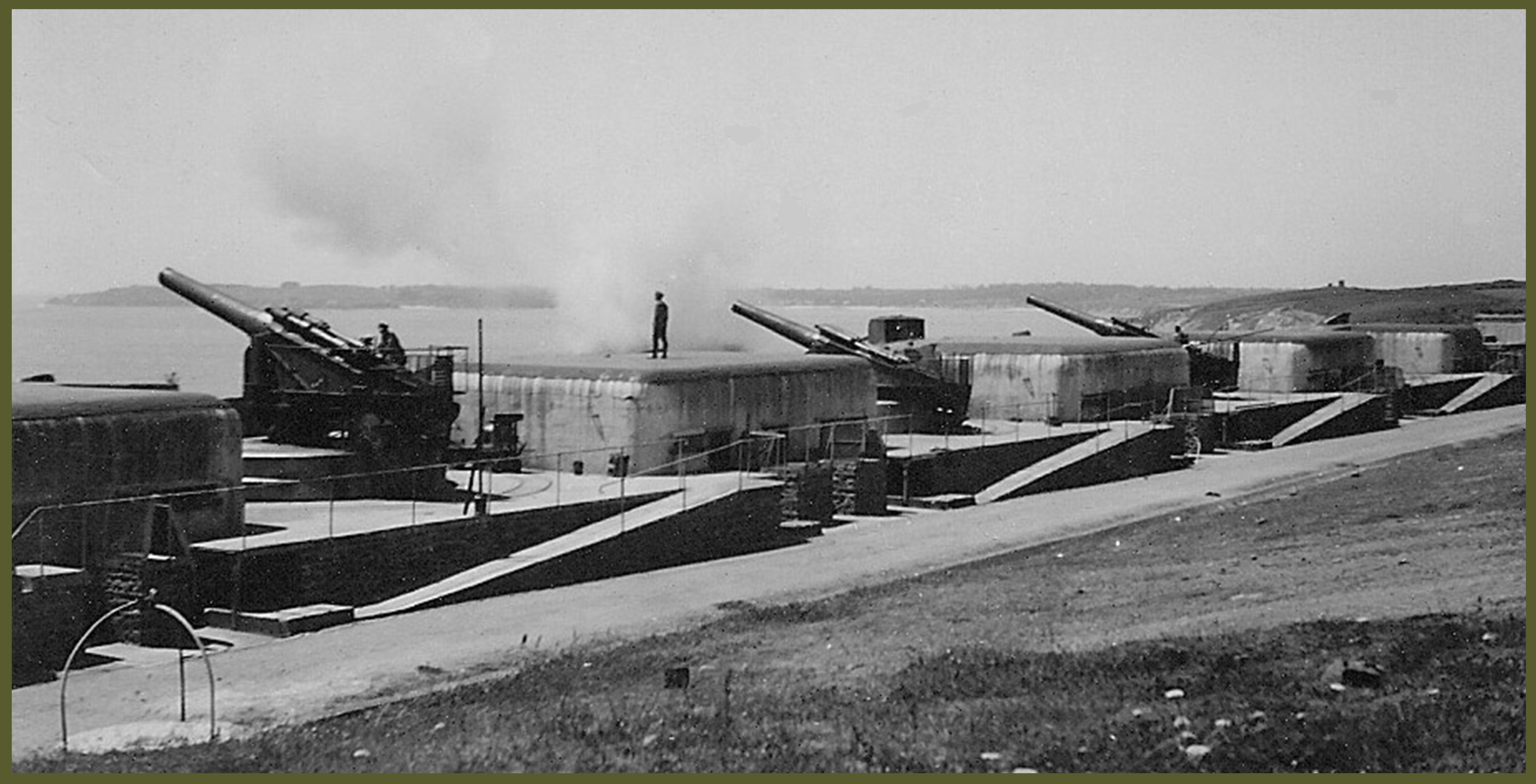 On the 3rd of September, the Rangers continued the attack on Fort Toulbroc’h. Lieutenant Gambosi led the assault but the air support requested missed it’s target by 400 yards.

The men had to wait in the draw for another strike which came 30 minutes later, only to miss again! After the second air strike, Lieutenant Gambosi decided to use purple smoke to mark the target for the third bombing.

Eight P-47 flew over the fort waiting for the purple smoke but the smoke shells fired by the artillery struck the fort and created a screen of smoke. Phosphorus was used and the P-47 succeeded in dropping sixteen bombs on the Fort.

Lieutenant Gambosi’s men moved toward the Fort less than 100 yards while the planes came back to machine gun it over and over.

The men used the cover provided by the planes to advance toward on the Fort, when the last bullet from the plane was fired, the Rangers were less than 20 yards from the ricocheting bullets. A couple of minutes after, the sixty Rangers entered inside the Fort and took control of it.

Later General Charles Hunter Gerhardt heard about what the 5th Rangers accomplished. He told his aide de camp: “Look up Sullivan’s record and call him up here, so I can pin a medal on him”.

The President of the United States of America, authorized by Act of Congress, July 9, 1918, takes pleasure in presenting the Distinguished Service Cross to Major Richard P. Sullivan (ASN: 0-399856), United States Army, for extraordinary heroism in connection with military operations against an armed enemy while serving with the 5th Ranger Infantry Battalion, in action against enemy forces during the period 6 to 10 June 1944, in France. Completely disregarding his own safety, Major Sullivan personally directed a successful landing operation and lead his men across the beach covered with machine gun, artillery and rocket fire. After reorganizing his men he immediately resumed his duties as Battalion Executive Officer and was placed in command of two Ranger companies which fought their way inland against fierce opposition to join and relieve the Ranger detachment on Pointe du Hoc. After laying communications through the enemy lines under cover of darkness, Major Sullivan directed the Rangers' progress across country to Grandcamp-Maisy. In cooperation with United States Infantry an attack was begun on the Maisy battery. When certain elements were temporarily halted by artillery fire Major Sullivan, who had been wounded at Maisy, calmly and courageously rallied his officers and men, ordered a renewal of the attack, and instead of bypassing the resistance, advanced over heavily mined terrain to capture the Maisy battery with a loss of only fifteen men. Eighty-six prisoners and several large caliber artillery pieces in concrete bunkers were taken. Attacks by Major Sullivan's command contributed greatly to the success of the entire Corps operations. By his intrepid direction, heroic leadership and superior professional ability, Major Sullivan set an inspiring example to his command. His gallant leadership, personal bravery and zealous devotion to duty exemplify the highest traditions of the military forces of the United States and reflect great credit upon himself and the United States Army.