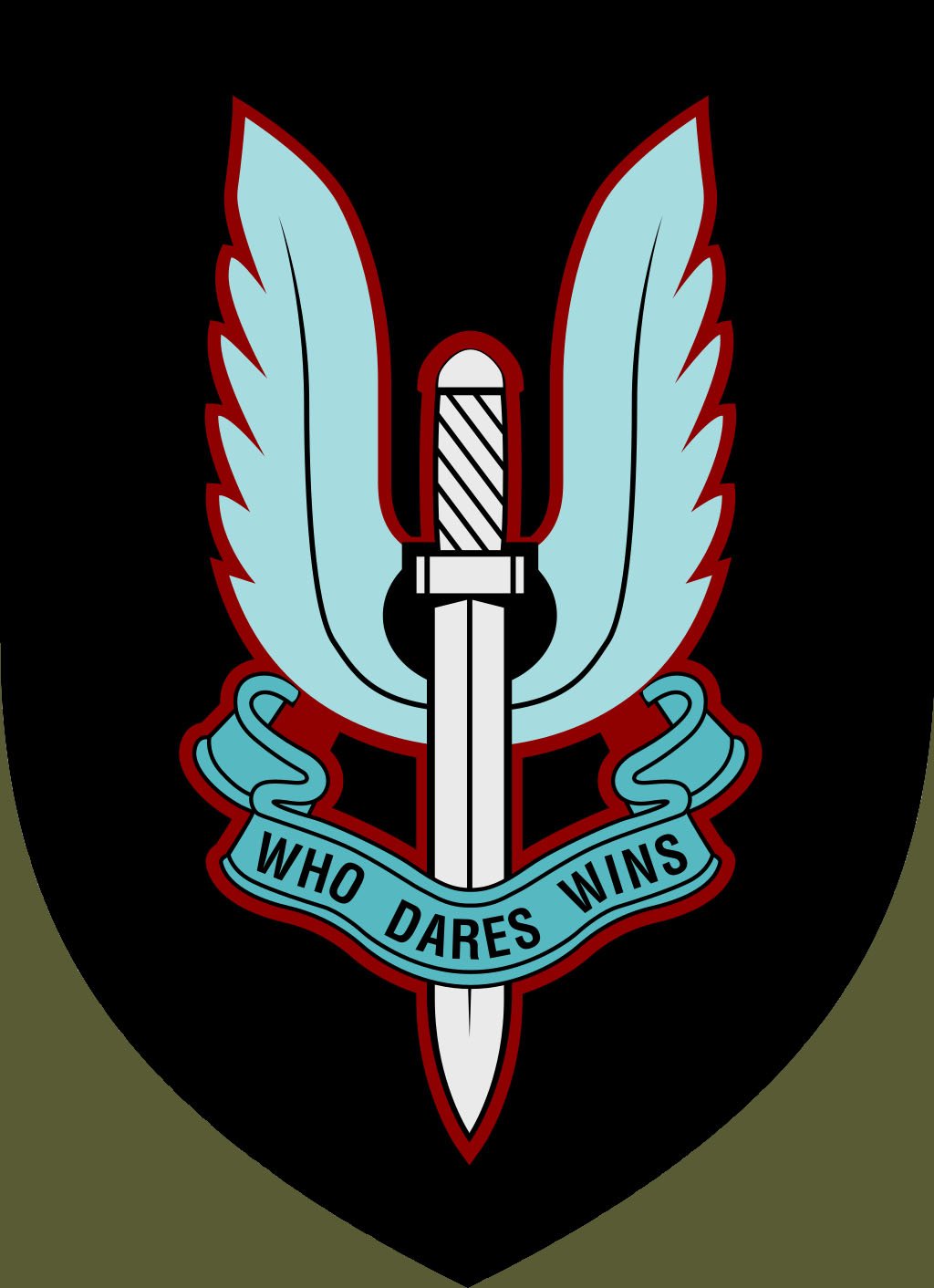 The Special Air Service was created in 1941 in Africa. Composed of small groups of 3 to 5 men, their objectives were to be dropped at night behind the enemy lines to destroy the installations such as but not limited to, weapon dumps, ammunition dumps, airplanes, airfields… The force of the SAS was the sabotage, the famous “Hit & Run”. It meant to explode railroad tracks, blow up oil dumps, destroy power plants then get the hell out, drive back to base, take supplies and do it again and again and again to tire the enemy. This means of combat was at the time revolutionary: the S.A.S. were fast and elusive.

They were not common soldiers, they received very hard and difficult training, a training never seen before. Jack Sibard, a soldier who enlisted in the Special Air Service in 1940, who left France to join General De Gaulle said: “I remember the training, we had very hard times, we had to jump off the truck…..walk 93 miles, then 49 miles. Every other day 31 miles then 49 miles again!”.

Back to Great Britain after the African Campaign, the Special Air Service saw its ranks grow up. French men aged between 17 to 30  joined the SAS to fight against the Germans. First they were trained as paratroopers and had to learn to jump out of an airship! “The parachute takes much more time to open itself when you jump from an airship than from an airplane. The fall is way too long, around 3 seconds, those 3 seconds seemed to last forever.” Phillipe Akar.

Soldiers of the SAS feared the jump at night the most. The night jump was essential if they wanted to become a paratrooper. “The jump at night was the most dangerous” Armand Bouilloux.

After the paratrooper training, came the commando training for the men who wanted to join the SAS and be the best in all disciplines. “By section or by stick we had the mission to make it from one point to another; we were given a timing to do it. The timing was always extremely short, but we had to do it, even when we had the feeling that our lungs were about to explode! For us the only possible punishment was to be eliminated. We wanted to succeed, we wanted to land on our soil” Achille Muller.

The instructors were not looking for usual soldiers who were waiting for the orders but for men able to make decisions in any given situation. Only the best joined the Special Air Service. The British were counting on these men, the Prime Minister Winston Churchill gave his support, even King George VI. Each man was used for his best skills. Victori Turias, a Basque Pelota champion, became the best in throwing out grenades; even at 70 meters he never missed his target. Phillipe Akar who had studied in an Engineer school became an instructor and expert in explosives. One of his classes was filmed in April 1944. “They taught men to become soldiers, able to do everything...the SAS killed without getting killed, it's cruel but logical!” Achille Muller.

To execute with success their mission, the British gave them new equipment. The jeep was stripped off of everything which could slow them down during the battle. The windshield was removed, the spare wheel found itself on the hood. The headlights were hidden because the SAS were driving at night. The jeep was armed with Vickers machine guns. Double vickers at the front and a single or sometimes double at the rear. Those machine guns allowed the SAS to shoot while they were driving. “We had a colt, a knife and it didn’t cut potatoes, it was really to kill, we could do anything with it. Open a canned food or eventually cut a throat, they taught us that too” Achille Muller. 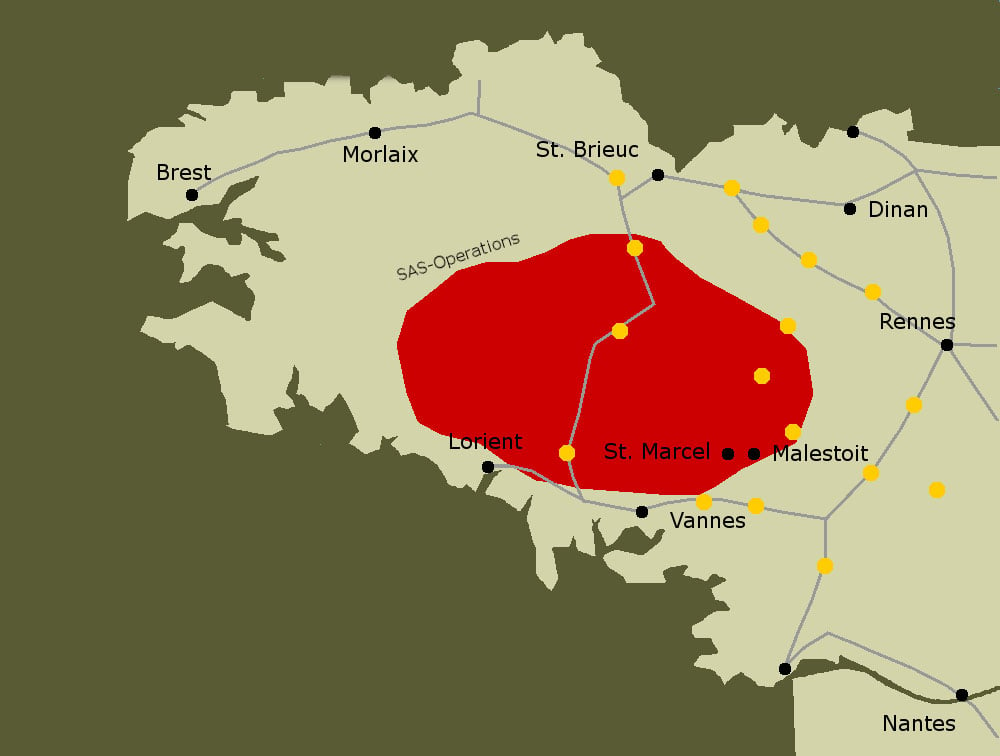 On the night of the 5th to 6th of June 1944, just before midnight, 36 French soldiers of the Special Air Service were on their way from Fairford Airfield in the south of England to Brittany, France. Their mission was to prevent the 150 000 Germans based there to make it to Normandy. The French paratroopers were to be dropped in two drop zones: “Samwest” in the North of Brittany and “Dingson” for the South.

Lieutenant Pierre Marienne and his 8 men were the first to land on the French soil. Unfortunately, Caporal Bouétard was not dropped in the right place but 2 miles up to the North in front of some German strongpoints.

Caporal Emile Bouétard will be the first casualty of the Allied forces on D-Day; his men will all be taken as prisoners.

Lieutenant Pierre Marienne found Lieutenant Henri Deplante’s group on the 7th of June 1944, they were taken to the Maquis of Saint Marcel where the Free French Fighters of Colonel Maurice had set up their base. Around 500 Free French Fighters were gathered in the camp. The SAS could start their work. On the night of the 7th of June supplies from England were dropped. A couple hours after the first drops, 58 additional SAS jumped. It was the beginning of the Operation Cooney.

On that night the SAS started their work, and the first weapon dumps, electric installations, railroads were destroyed. “I don’t want to say it was a game, but you can’t imagine the feeling we had when the power plant exploded. It created a huge blast with burning light that, for sure, people even miles away heard and saw. We would have applauded… we were still kids,19 years old!" Octave Bernault.

Operation Cooney was a huge success, in just 4 days the SAS, with the help of the Free French Fighters, had destabilised 150 000 Germans! Proud of its men, the headquarters sent 400 more SAS.

In the night of the 10th to the 11th of June, Commandant Pierre-Louis Bourgoin, who had lost his left arm during the African Campaign, joined his men in Brittany at the Maquis Saint Marcel, near the village of Saint Marcel, Morbihan department.

The Germans were not paying too much attention, probably because they didn’t know that the Maquis of Saint Marcel was hiding around 500 SAS!

On the 18th of June 1944, at sun rise, the Free French Fighters organized an ambush and killed 7 German soldiers: only one managed to escape...

Commandant Pierre-Louis Bourgoin then gave the order to split up their forces but it was too late! Two hours later, around 0930 am, the German forces attacked the Free French Fighters, and discovered that they were well prepared and well armed. It was only at that time that the Germans understood that French SAS were hiding in the Maquis Saint Marcel. After two assault waves the SAS and the Free French Fighters were almost overflowed. Commandant Bourgoin asked for Air Support which arrived 3 hours later, it was only at this time that the Germans withdrew. The SAS and Free French Fighters fought back the German forces but 28 men died as well as 6 SAS and 60 were wounded.

The next day, Commandant Pierre-Louis Bourgoin became the enemy number one of the Germans and they started to hunt him down. Every man with a missing arm was arrested!

The SAS continued their mission, splitting up in small groups throughout the territory which had the codename “Zone Grog” and started again to destroy power plants, railroads, oil dumps etc...

The Germans had found out that it was Lieutenant Marienne, promoted Captain who was now in charge of the Free French Fighters. “He was a meticulous, a responsible man. He knew how to manage his men, at the Maquis Saint Marcel he was always on the frontline.” Achille Muller

On the 11th of July 1944, Captain Pierre Marienne with his men and some Free French Fighters were taking a rest in a barn at Kerihuel en Plumelec (D-126). The French militia with the Gestapo who had been looking for them finally found them! The enemy had played a classical trick on the locals, they said they were Free French Fighters and wanted to join the SAS to fight the Germans. “French militia men from Brittany, led by a man named Zeller was wearing a SAS uniform. He had taken it from a dead SAS…..This man Zeller took Captain Marienne and his men out of the barn and shot them in the back. It was so painful, especially when we learned they were killed by French people.” Achille Muller. 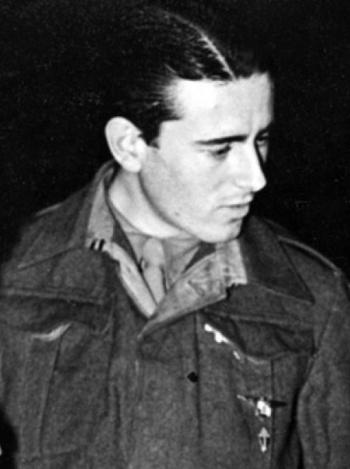 
For the next two months, the SAS and Free French Fighters continued to destroy the German installations in Brittany and waited for the support of the American forces until the beginning of August 1944.

Hidden in the woods or in barns, they succeeded in blocking off 150 000 Germans from making it to Normandy.

“I can tell you, we were brothers, if someone had a problem it was the problem of everyone. We knew each other very well. We were a Band of Brothers… “Jack Sibard