"Bloody" Omaha is the most famous beach of all D-Day landings beaches. The German forces held off the Americans for most of the day.

There, on Omaha beach, the US Army had to face two enemies on D-Day: the Germans and the tide !

Sharing with you the stories of some of these brave men of the 29th Infantry Division who met their fate on this beach, fighting for our freedom, is for Normandy American Heroes essential. Why? Because they sacrificed their lives so we could live in a better world.

The 116th Infantry Regiment was attached to the 29th Infantry Division. Its mission was to seize the village of Vierville-sur-Mer then to push inland to Isigny-sur-Mer.

The troops of the 116th Infantry Regiment were in stand-by, ready for battle, 12 nautical miles off the coast of Normandy. They were scheduled to land on the Western flank of Omaha beach between the villages of Vierville-sur-Mer and Saint-Laurent-sur-Mer. Two Ranger battalions were to accompany them on their rendez-vous with destiny.

The Engineers had the mission to clean out the beach from obstacles and the Duplex Drive amphibious tanks to give them firing support. Because of the bad weather conditions, not one of the 15 German strongpoints was destroyed, worse the Atlantic Wall remain intact!

It was from this moment on that everything went wrong at Omaha Beach. Stuck between the German strongpoints and the tide which was coming up fast, the soldiers found themselves trapped in the middle, amidst the Atlantic Wall line of defense. Worse, most of them didn't know how to swim and many drowned due to their equipment being too heavy or taken out at sea after been wounded. 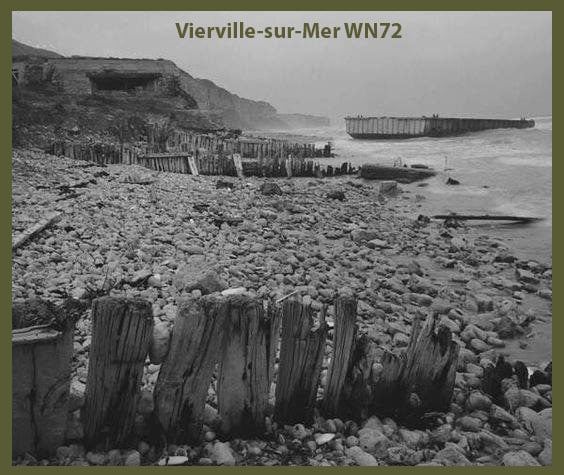 Companies “A” and “E” of the 1st Battalion and Companies “G” and “F” of the 2nd Battalion were part of the first assault wave.

They landed at 06:36 am on Dog Green in front of the Widerstandsnests code name WN70 and WN71.

Company "A" was put out of action ten minutes after the ramps went down! They didn’t reach the exit of Vierville-sur-Mer. Most of the officers were killed, the Germans had them as their main target with the Medics. Of all the officers wounded and/or KIA, Lieutenant Elijah Nance, hit in the heel, was the only one who reached the beach.

Company “E” landed on Easy Green, West of Les Moulins. Men had to face the WN68 and WN66 and saw that only one Duplex Drive amphibious tank fired on the Germans. 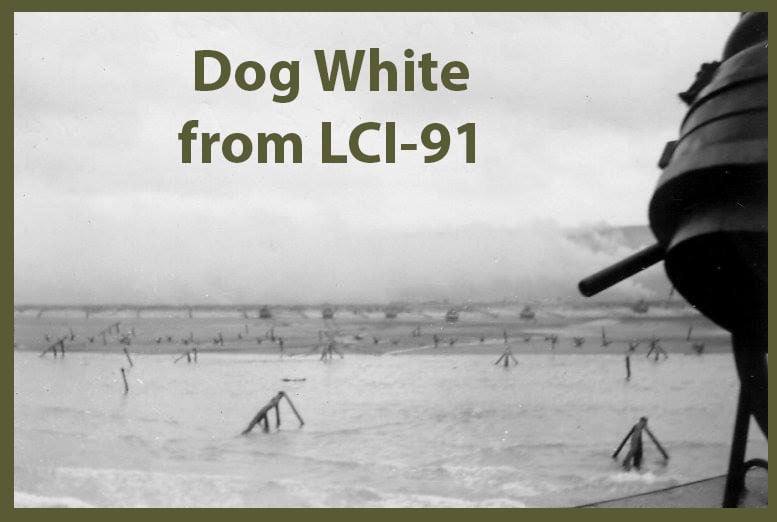 Company “G” landed at 06:35 am on Dog White, East of Les Moulins. The youngest soldiers didn't expect to meet resistance from the Germans but the older and experienced soldiers understood directly when they approached the beach that the bombs didn’t hit the defences and that the battle would be gruesome. The company was assembled in a section at the base of the cliffs in just 4 minutes, the fastest concentration realised on D-Day.

For the men of  Company “F” as for the Company “A”, God was not with them. They landed on Dog Red in front of Les Moulins but their boats were too exposed. The German fire was so heavy that it destroyed the three sections. It took 45 minutes for the men of Company “F” still alive to reach the seawall!

Company “B” landed at 07:30 am on the same sector as Company “A”. Its mission was to support this company. On their way to shore the British coxswain didn’t want to let the ramp down because the beach was full of smoke and dust. They landed under mortar fire and lost their Captain, Captain Ettore V. Zappacosta. It was then that Lieutenant William B. Williams took command. He succeeded in bringing ten of his men to the seawall in just ten minutes, under enemy fire! They were stopped by a machine gun on the cliff. 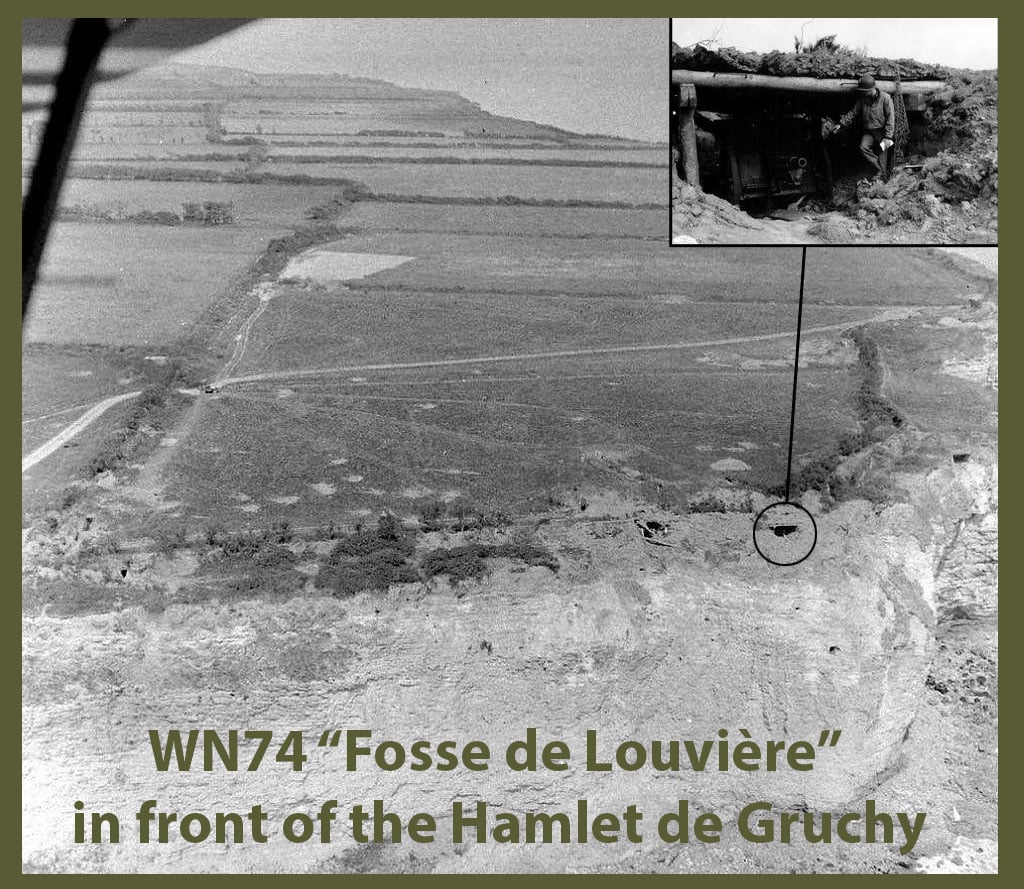 Company “C” had for objective to gain the high grounds of Vierville-Sur-Mer and seize the hamlet of Gruchy, 3 km west of Charlie / Dog sector. No enemy shells hit their boat while heading on shore. Captain Hawks and his men made their way to shore and reached the seawall.

The last company of the 1st Battalion to land was Company “D”. They arrived ten minutes after Company “C”. Captain Walter O. Schilling who took the lookout position at the front of the Higgins barge (LCVP) was killed by an explosion, which blew up the ramp and the boat. It took, for his company, 30 minutes to reach the seawall

The last company of the 2nd Battalion to make it to shore was Company “H” led by Lieutenant Leon D. Harvey. They landed too far East and found themselves in the 1st Infantry Division sector but succeeded, nevertheless, to head back West to meet the other elements of their Battalion.

“I” Company was divided into two assault sections and landed at 07:20 am. As Company “G” still hadn't managed to get the "hell" out of the beach, Company “I” had to succeed!

All landed in deep water but had managed to spread out immediately in a V formation.

At H+50, Company “K” landed... 10 minutes earlier than planned. Men received artillery fire on their LCVP and Lieutenant Ray G. Hellikeen was accidentally wounded by a bayonet from one of his men!

The third company of the 3rd Battalion to land was Company “L”. They landed behind the 2nd Battalion at 07:20 am. The men met artillery fire during their way to shore, the boats had split up due to the rough sea, but fortunately they didn’t lose one single man while running ashore (note: actually walking due to being seasick, and heavily loaded like the rest of the infantry). At the seawall they met elements of Company “G”.

Company “M” landed on the left flank of the 3rd Battalion as planned at knee deep on a part of the beach where no one had landed before them. They drew straight away, on their heads, the infamous 88 mm artillery enemy fire. Corporal William Jarrett was killed by a machine gun while he was still on the boat. Men from Company "M" will realize 25 minutes later that they had landed at the wrong place!

On the beach, not one soldiers had left the sand. The men were stuck between the tide and the German fire. Some of them were seasick and exhausted due to the fear. Most of them decided to get rid their gear because it was too much weight on their shoulders and slowing them down in their movements.

One man took the initiative to remotivate the troops, General Norman "Dutch" Cota.  All the troops were pinned down by the Germans for most of the day but at 09:00 am with the support of the 5th Rangers Battalion, who were supposed to be landing at La Pointe du Hoc, Causeway 1 fell under the control of the Americans...

The Normandy American Cemetery is built on the top of the cliffs in front of Easy Red (1st Infantry Division) where 9387 American soldiers have found their final rest. 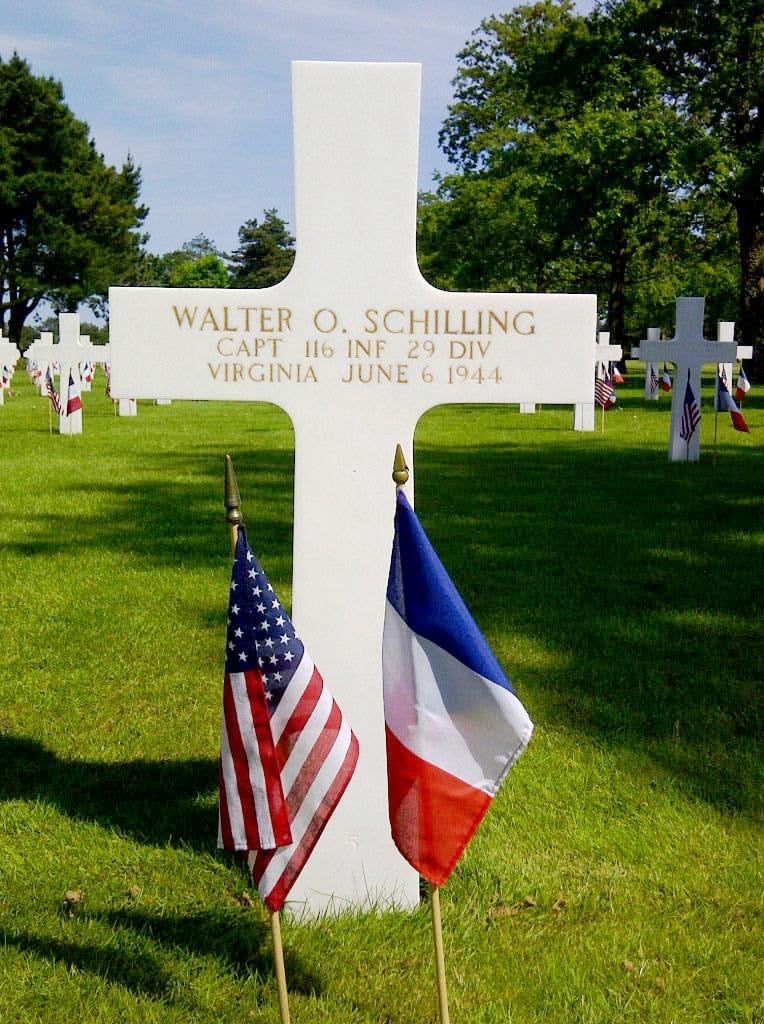