From 1940 to 1945, the RAF and USAAF caused heavy damage at Nuremberg with the greatest bombing occurring on January 2nd, 1945.

521 British Bombers dropped at least 6,000 high-explosive bombs and one million incendiary devices on the city. 1,800 civilians estimated were killed and more than 100,000 lost their homes in this attack.

Headquarters of the 8th USAAF Services Command (Advanced) is established in Brussels, Belgium, along with a "Far Shore" staff division.

Through this HQ, the Commanding General Air Force Services Command can administer his command and closely communicate with other commands operating on the Continent; this arrangement functions until April 29th, 1945 when it is relieved by the 5th Strategic Air Depot at Merville, France. Source 8th AFHS 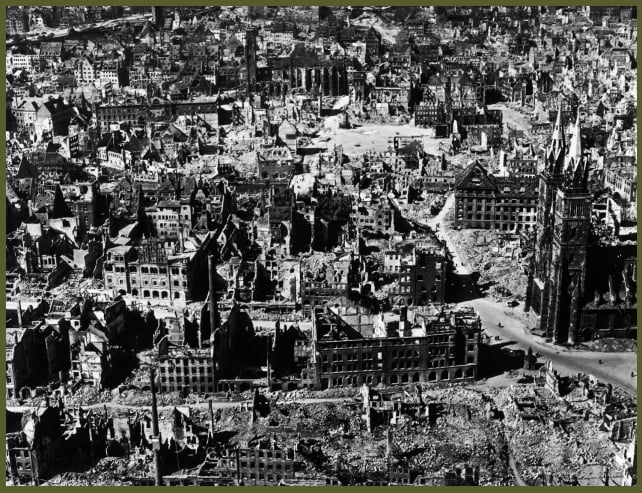 February 14th, 1945, the Allies bomb Dresden in Eastern Germany. In four raids between February 13th and 15th 1945, 722 heavy bombers of the British Royal Air Force (RAF) and 527 of the United States Army Air Forces (USAAF) dropped more than 3,900 tons of high-explosive bombs and incendiary devices on the city.

The bombing and the resulting firestorm destroyed more than 1,600 acres (6.5 km2) of the city centre.

An estimated 22,700 to 25,000 people were killed in the firestorms that engulf the city. Overall, 90% of the city centre was destroyed. 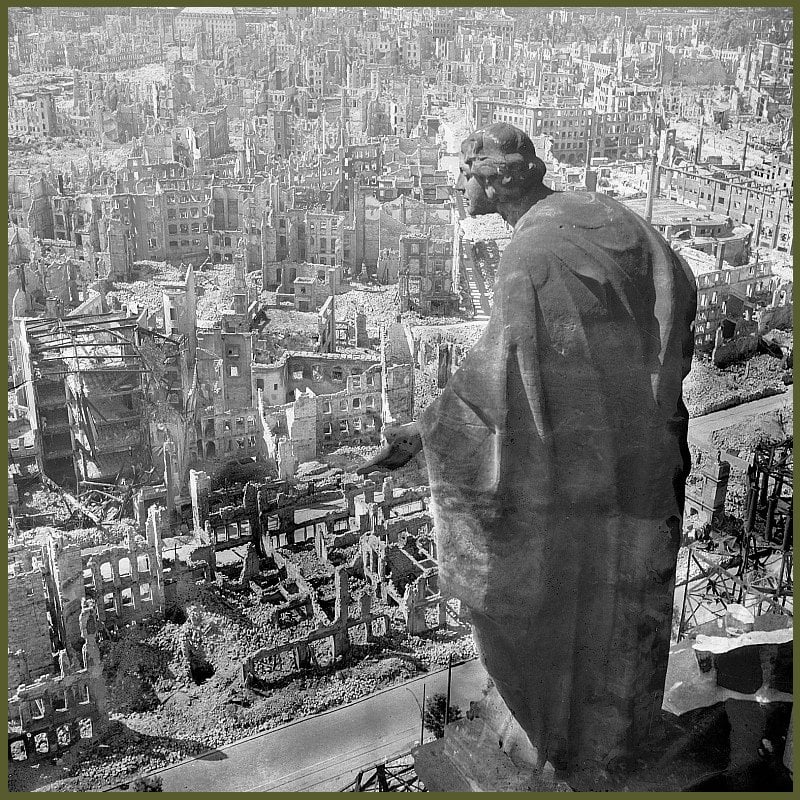 “It is not possible to describe! Explosion after explosion. It was beyond belief, worse than the blackest nightmare. So many people were horribly burnt and injured. It became more and more difficult to breathe. It was dark and all of us tried to leave this cellar with inconceivable panic. Dead and dying people were trampled upon, luggage was left or snatched up out of our hands by rescuers. The basket with our twins covered with wet cloths was snatched up out of my mother's hands and we were pushed upstairs by the people behind us. We saw the burning street, the falling ruins and the terrible firestorm. My mother covered us with wet blankets and coats she found in a water tub.

We saw terrible things: cremated adults shrunk to the size of small children, pieces of arms and legs, dead people, whole families burnt to death, burning people ran to and fro, burnt coaches filled with civilian refugees, dead rescuers and soldiers, many were calling and looking for their children and families, and fire everywhere, everywhere fire, and all the time the hot wind of the firestorm threw people back into the burning houses they were trying to escape from.

I cannot forget these terrible details. I can never forget them. “Lothar Metzger, survivor

“To my left I suddenly see a woman. I can see her to this day and shall never forget it. She carries a bundle in her arms. It is a baby. She runs, she falls, and the child flies in an arc into the fire.

Suddenly, I saw people again, right in front of me. They scream and gesticulate with their hands, and then—to my utter horror and amazement—I see how one after the other they simply seem to let themselves drop to the ground. (Today I know that these unfortunate people were the victims of lack of oxygen.) They fainted and then burnt to cinders.

Insane fear grips me and from then on, I repeat one simple sentence to myself continuously: "I don't want to burn to death". I do not know how many people I fell over. I know only one thing: that I must not burn “. Margaret Freyer, survivor 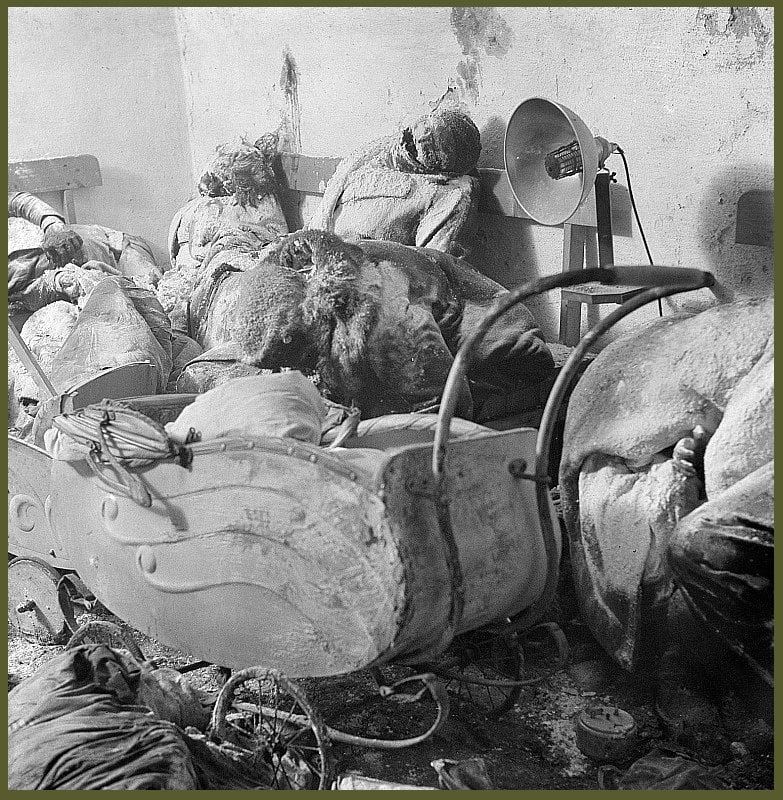 375 B-24s are sent to hit an oil refinery at Magdeburg but are unable to attack due to weather; 340 hit the secondary, the marshalling yard at Magdeburg; targets of opportunity are Emlichheim (1), Meppen (1), Bad Bodenteich (1) and other (1); 1 B-24 is lost, 2 damaged beyond repair and 16 damaged; 9 airmen are MIA. 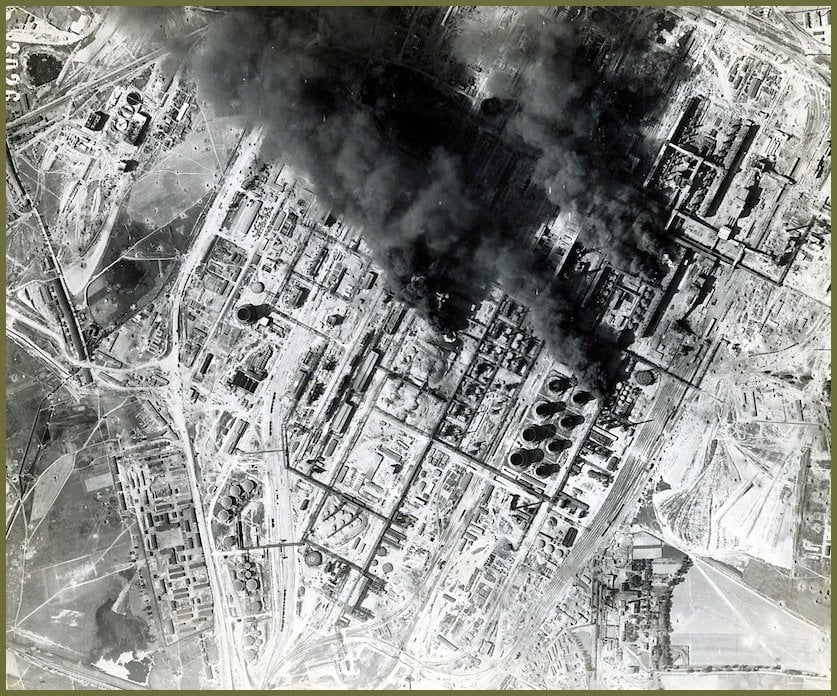 The large-scale air attack on the city of Würzburg was targeted by RAF Bomber Command to break the spirit of the German people on March 16th, 1945.

225 Lancaster and 11 Mosquito Pathfinders targeted the town center and released 1,127 tons of bombs including 370,000 incendiaries bombs dropped in three waves in just 17 minutes! 89% of the town will be destroyed by the firestorm with 1,000 to 2,000-degree Celsius heat by midnight. More than 3,000 civilians will be killed and another 2,000 missing.

The vast majority killed were women and children, most of them painfully burned to death.

The crews who dropped the bombs had been told that it was an “important center of communication”, yet the vast majority of the bombs dropped were incendiaries with diabolical time delays and fell mainly on residential areas. 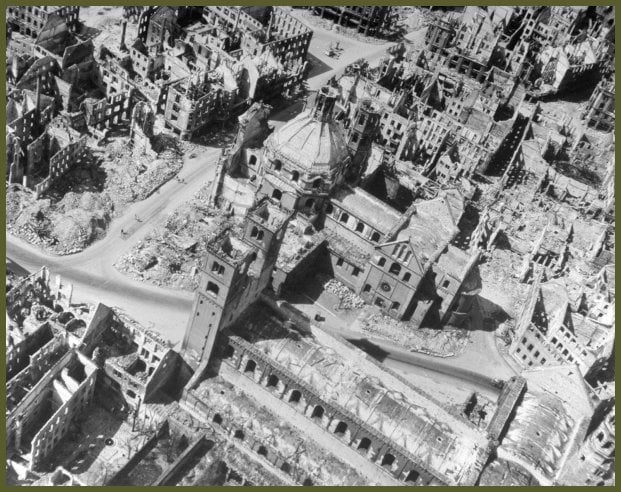 Twenty aircraft from the 617th Squadron, six with Grand Slams and the remainder with smaller Tallboy bombs, along with 16 aircraft from 9 Squadron attack the island's coastal gun-batteries. No aircraft were lost. A total of 42 Grand Slams were dropped in air operations over Germany

May 7th, 1945 Victory for the Allies in Europe is signed in Reims, France, a remake will be organized in Berlin as they were no Russians representative at the capital of the Kings of France!

The bombing campaign cost hundreds of thousands of lives on both sides. It did not alone win the war, but it helped to bring victory!

The USAAF began the war planning to attack specific sites with precision accuracy. But they soon found that this was hard to achieve, often because the targets were covered by clouds!

Electronic devices were developed to get the bombers to the right place. Accuracy did improve, but precision bombing remained difficult: at least 80% of bombs dropped landed 300 meters (1,000 feet) or so from their targets.

Nevertheless, some bomb campaign was more successful than others. When the USAAF attacked Germany’s oil production facilities and transport networks, the Third Reich was severely weakened.

Achieving to destroy the Third Reich Luftwaffe gave the Allies full control of the skies. This considerably helped the troops fighting on the ground. But overall, the Allies discovered that weakening German industry and morale was harder than many had hoped. When you defend your own soil, the motivation is not the same as defending a country that you invaded!

Of course, it’s a reality, bombing did have a dramatic effect on life in Germany. The Nazi government had to plough huge resources into defense and Joseph Goebbels speech of propaganda at one point failed to motivate the Germans to believe in Hitler.

The Nazis knew that fighter aircrafts and anti-aircraft guns had to be built to attack the bombers, and that millions of people in Germany had to deal with the problems caused by the raids. Even German children at the end of the war were forced to fight! But in the end, the Third Reich could not prevent the USAAF and RAF to bomb:

At least 80,000 Allied airmen and approximately 750,000 men, women and children on the ground lost their lives.

Unconditional surrender of the Third Reich at Reims, May 7th, 1945

HQ 453rd Bombardment Group (Heavy) and the 732nd , 733rd , 734th and 735th Bombardment Squadrons (Heavy) begin a redeployment from Old Buckenham, England to the US. It is only group departing by ship.

After the war the cities were rebuilt, but even now unexploded Allied bombs continue to be discovered as in Courseulles-sur-Mer, Normandy – France, September 2020. 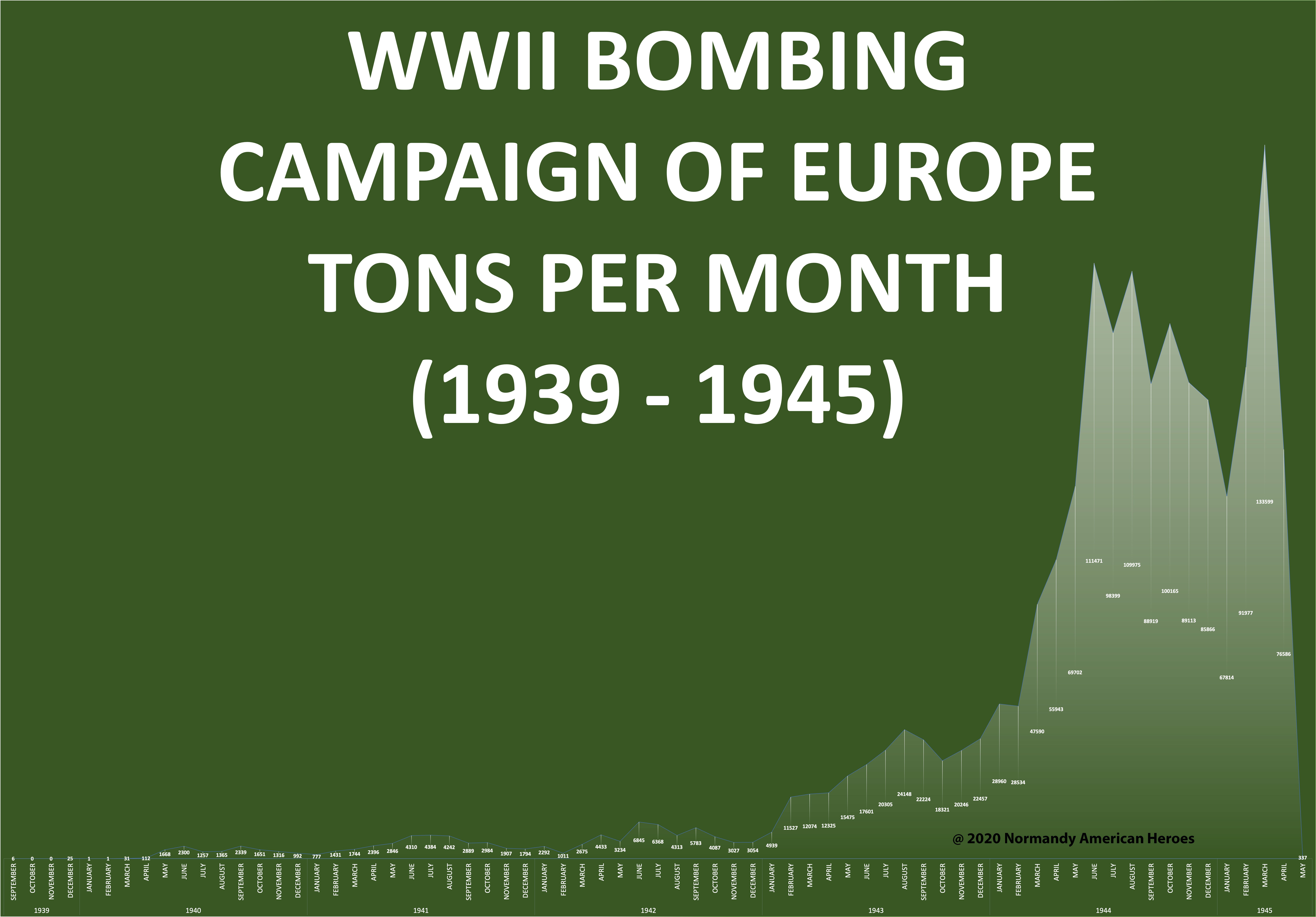