Normandy American Heroes has decided to translate freely (my own comments...) the article so as to make it easier for you to understand what the Region Normandy would like to put in place before the 80th Anniversary of D-Day.

Carentan-les-Marais (famous for the Band of Brothers series) is a contender for this ambitious projects says Jean-Pierre Lhonneur.

He is in favor of setting up a memorial park on the theme of the landing carried by three private producers which should be called: "Homage to the heroes". The negotiations are presently held.

35 hectare available for the project near Carentan-les-Marais

Just three days after the call for tender of Hervé Morin, President of the Region Normandy, the Mayor of Carentan-les-Marais has brought forward his arguments:

The Mayor of Carentan-les-Marais recently welcomed the three project leaders: Stéphane Gateau, Roberto Ciurleo and Régis Lefebvre. He showed them the 35 hectare land situated in a non flooded area (note: "les marais" means the swamps!) that could be available, needless to say they were all enthusiastic of it. The Mayor took the initiative to negotiate the purchase of the land and anticipated the compensation that will be given to the farmers who may find themselves "expropriated".

Today the Mayor has verbals agreements with the owners of the fields and waits for the "go" to finalize the purchase of the land, hoping he was sufficiently convincing in his arguments.

"Whatever the decision of the project leaders, the choice has to be taken asap, bearing in mind that the opening is scheduled during the Spring of 2024!" says the Mayor

The Mayor knows that the town of Bayeux in the Calvados department (Gold Beach) is also highly interested in having this theme park nearby.

Patrick Gomont, Mayor of Bayeux confirms that the land where the theme park would be situated is on a WWII Hospital site.

Jean-Pierre Lhonneur, Mayor of Carentan-les-Marais replies that it's in his town that the junction of the US Troops between Omaha and Utah was made...quite a symbol!

note: took the liberty to put "some" as it is not the majority

The Mayor of Carentan-les-Marais is surprised by the resistance of certain committees who are campaigning against this project when the project hasn't been revealed yet...this is why this summer he decided to give his point of view of it by defending this ambitious project and will defend it all the way.

He states that this huge project supported by the Region would enable the town to develop further more the local economy and tourism.

All the municipalities which are attached to Carentan-les-Marais would benefit of it. Apparently it would also give the opportunity for the town to continue its project of building a hotel there.

note: a US tour operator who had announced last year that they were going to build a 40 Million Dollar hotel went bankrupt due to the pandemic

He also believes that the cruise ship stopping in Cherbourg may find interest for their guests to come to this theme park.

The project leaders are hoping to have 600,000 visitors per year.

What we know of the project

"...I know pretty well the concept having been to 4 or 5 meetings. It's a traveling concept of about 800 meters long with sequences based on images from the archives and comedians on the esplanade. A main street is also planned with local products brought forward. It's an incredible project!" 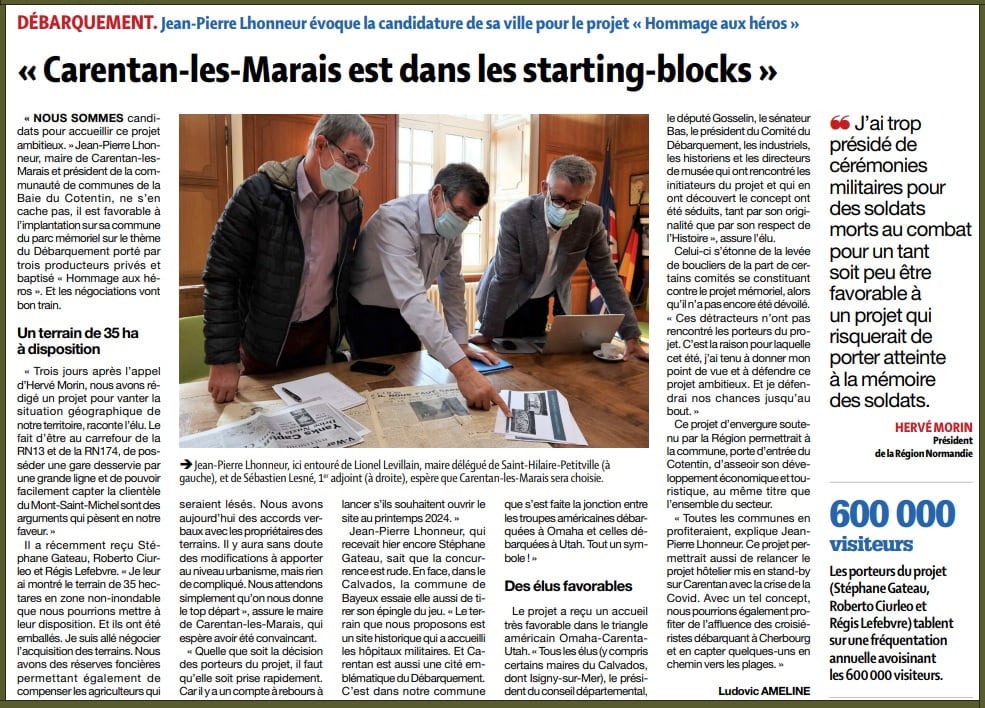