United as one, we fight as a team and forever we will all be green

For more than two centuries the United States Marine Corps have fought all around the world for freedom.

Brotherhood, courage, sacrifice is the motto of the USMC. From the Pacific theater to Afghanistan the Marine Corps have always answered to the call of duty This long journey began in the early hours on December 7th, 1941. 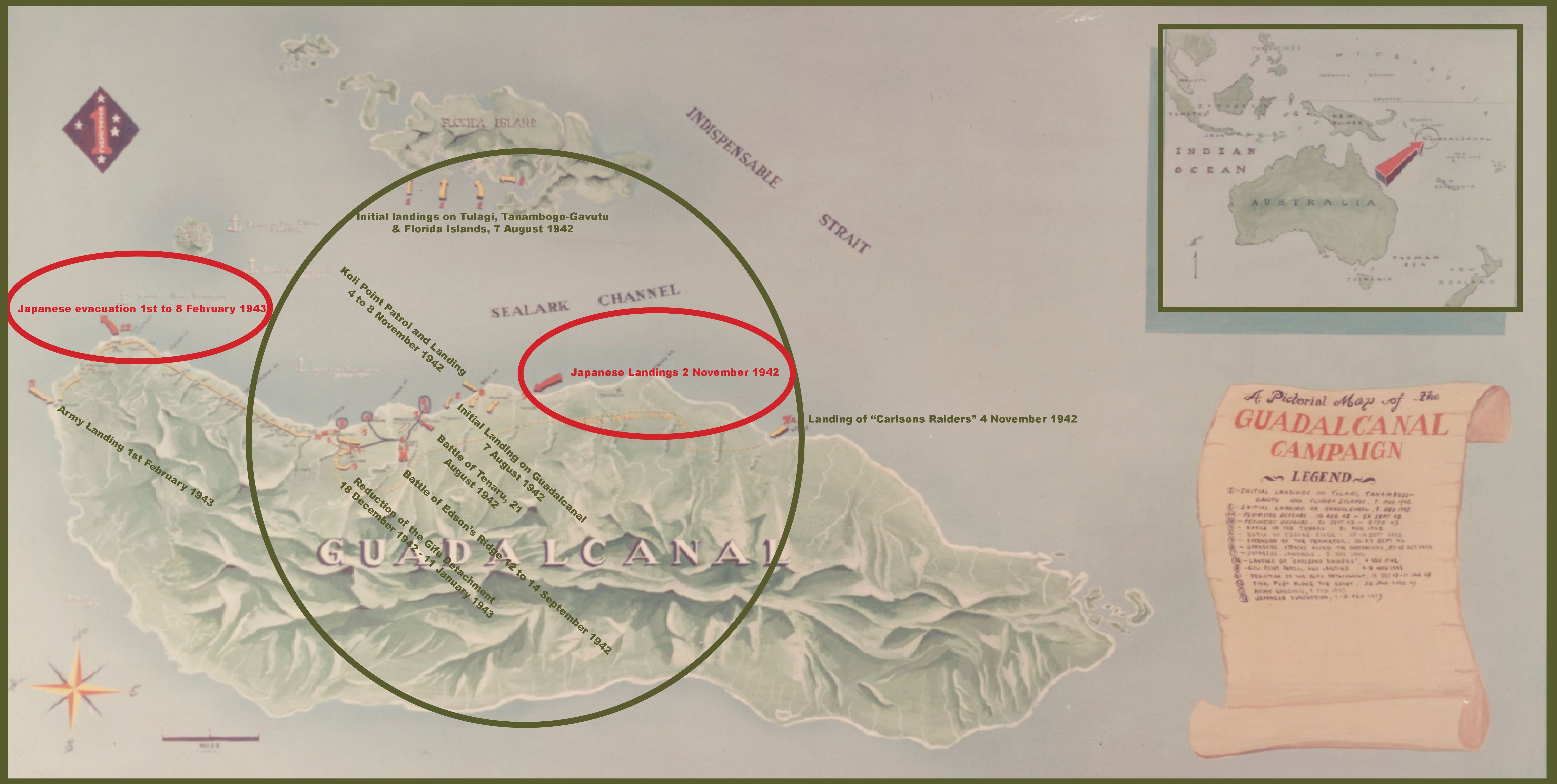 Sunday 7th of December 1941, the American naval base of the Pacific based at Pearl Harbor in Hawaii was attacked by the Japanese Forces without declaration of war. Around 2400 American soldiers were killed and more or less 1100 were wounded.

The next day the President of the United States, Franklin Delano Roosevelt announced during a speech to the members of the American congress that the USA declares war on the Empire of Japan.

The Empire of Japan continued its advance all across the Pacific (Burma, Philippines, Malaysia..) but also threatened Australia and India.

After the battle of Midway which was won by the Americans due to the success of decrypting the Japanese coded messages, the 1st Marine Division landed on the island of Guadalcanal (Operation Watchtower) on the 7th of August 1942.

The purpose of these missions were to repulse the Japanese’s based at Guadalcanal, Tulagi and Florida islands which threatened the trade roads between the USA and Australia but also to be a new starting point for the future attacks on New Guinea.

Soldiers of the 1st Marine Division had rough fighting during five months especially during the fight of Henderson Airfield.

On October 24th, 1942, Sergeant John Basilone’s unit was attacked by more or less 3000 Japanese soldiers with the purpose to seize the airfield.

Sergeant Basilone with his machine gun, fired continuously on the enemy for the next three days without resting (the others were wounded or dead) and held against the Japanese forces, without supplies (ammunition, food and water).

For his actions at Guadalcanal Sergeant Basilone was awarded of the Medal of Honor.

They were relieved on the 9th of December 1942.

For extraordinary heroism and conspicuous gallantry in action against enemy Japanese forces, above and beyond the call of duty, while serving with the 1st Battalion, 7th Marines, 1st Marine Division, in the Lunga area, Guadalcanal, Solomon Islands, on October 24 and 25, 1942. While the enemy was hammering at the Marines’ defensive positions, Sergeant Basilone, in charge of two sections of heavy machine-guns, fought valiantly to check the savage and determined assault. In a fierce frontal attack with the Japanese blasting his guns with grenades and mortar fire, one of Sergeant Basilone’s sections, with its gun-crews, was put out of action, leaving only two men able to carry on. Moving an extra gun into position, he placed it in action, then, under continual fire, repaired another and personally manned it, gallantly holding his line until replacements arrived. A little later, with ammunition critically low and the supply lines cut off, Sergeant Basilone, at great risk of his life and in the face of continued enemy attack, battled his way through hostile lines with urgently needed shells for his gunners, thereby contributing in a large measure to the virtual annihilation of a Japanese regiment. His great personal valor and courageous initiative were in keeping with the highest traditions of the United States Naval Service. Franklin D. Roosevelt President United States 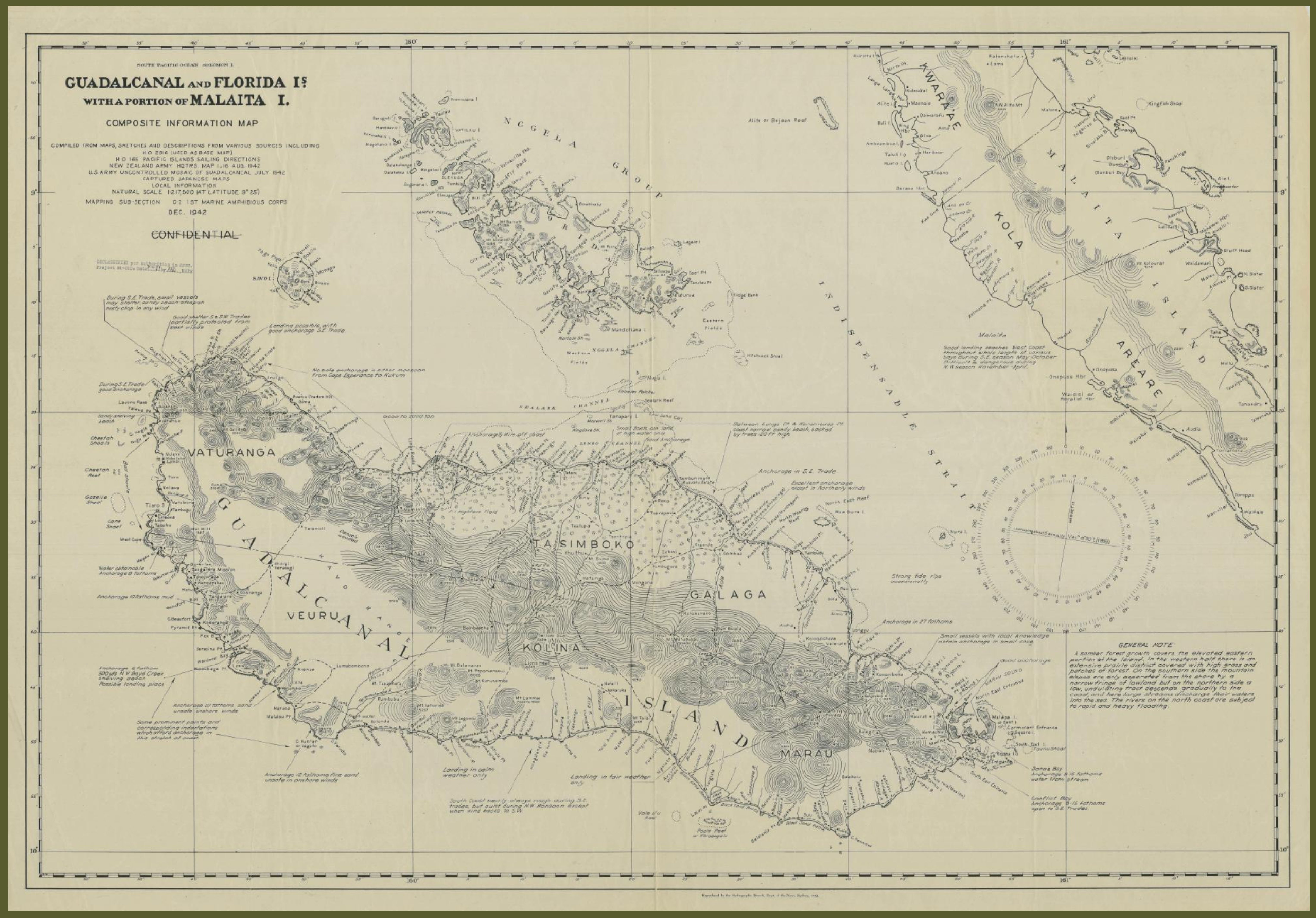 The US Marine Raiders

On the early hours of the 17th of August 1942, commanded by Lieutenant Colonel Evans Carlson, the Marine Raiders were onboard two submarines, USS Argonaut and USS Nautilus.

Their mission? Create a diversionary raid on the sidelines of the battle of Guadalcanal by blowing up the Japanese installations on the Makin island, stealing military documents and making prisoners of war.

The submarines surfaced in heavy rain and high seas, due to the bad weather conditions.

A couple of minutes after midnight, the Marines started to reach the beach onboard rubber dinghy.

Lieutenant Colonel Carlson changed his plans, instead of having each company landing on separated beaches, they landed together at the same spot but the word didn’t reach everyone!

Lieutenant Oscar F. Peatross ended up landing alone in the enemy rear. Outnumbered the men decided to withdraw and refer to the initial plan of attack.

Company “A” of 1st Lieutenant Merwyn C. Plumley crossed the island and turned southwest toward the known enemy positions. In the meantime Company “B” led by Captain Ralph H. Coyt followed Company “A” as support.

Lieutenant Colonel Carlson wanted to attack with the element of surprise but an accidental shot, alerted the Japanese forces. Soon after their arrival, the Marine Raiders encountered the first enemy opposition with sniper fire but mostly “Banzai charges”.

Sergeant Clyde Thomason died in this action, while bravely directing the fire of his platoon and exposing himself to the enemy. He was awarded posthumously the Medal of Honor and became the first Marine to be decorated in World War II.

For conspicuous heroism and intrepidity above and beyond the call of duty during the Marine Raider Expedition against the Japanese-held island of Makin on 17-18 August 1942. Leading the advance element of the assault echelon, Sgt. Thomason disposed his men with keen judgment and discrimination and, by his exemplary leadership and great personal valor, exhorted them to like fearless efforts. On one occasion, he dauntlessly walked up to a house which concealed an enemy Japanese sniper, forced in the door, and shot the man before he could resist. Later in the action, while leading an assault on an enemy position, he gallantly gave his life in the service of his country. His courage and loyal devotion to duty in the face of grave peril were in keeping with the finest traditions of the U.S. Naval Service.

After hours of fighting against the Japanese forces, 93 Marines succeeded in being evacuated around 19:30 hours. 5 others escaped during the night and 21 in the early hours of the 18th of August, but some of them, as Lieutenant Colonel Carlson, were missing.

With the help of the locals, Lieutenant Colonel Carlson learned that the enemy had withdrawn. He decided to go back in battle and destroyed the oil dump and seaplane installations with the rest of his unit.

Between 20:30 and 23:30 hours, Lieutenant Colonel Carlson found the rest of his men and escaped the island thanks to a makeshift raft.

Members of the Marine Raiders who had been lost during the raid, were still on the Makin island. With the help of the locals they were hidden for more or less ten days before being captured by the Japanese soldiers.

Navy Cross were distributed to the survivors but also posthumously. 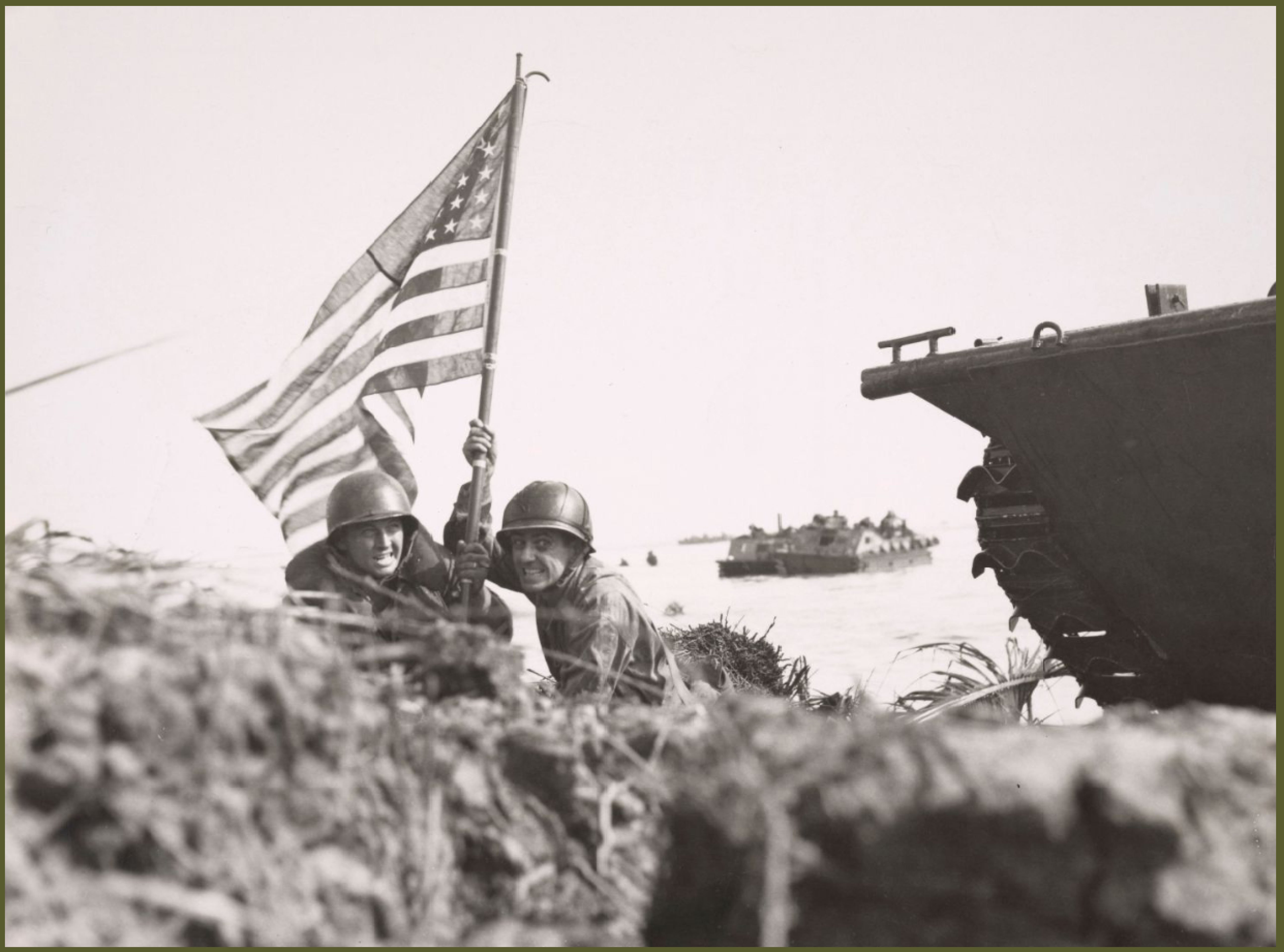 The Regiment will then be sent to Guadalcanal. It will only be after the end WWII that the United States Marine Corps discovered that 9 Marines had been left on the Makin island!

For the next three years, the United States Marine Corps fought at Tarawa, Iwo Jima, Peleliu and Okinawa.

When we hear those island’s names, they remind us of suffering, blood, death but above all, the word “Courage” come to mind! Why? They had to stay in their foxholes, be on guard seven days a week against an enemy well prepared, hidden in the jungle.

The jungle, let’s talk about it. The jungle so dense, stretching out for miles and miles that it was virtually impossible to say where it ended. Tropical sicknesses, mosquitoes, humidity, Japanese who knew very well their ground ambushing American troops anytime, anywhere. This truly was one of the Marine’s worst nightmare.

Many Marines were captured and sent in prisoner of war camps in Japan. 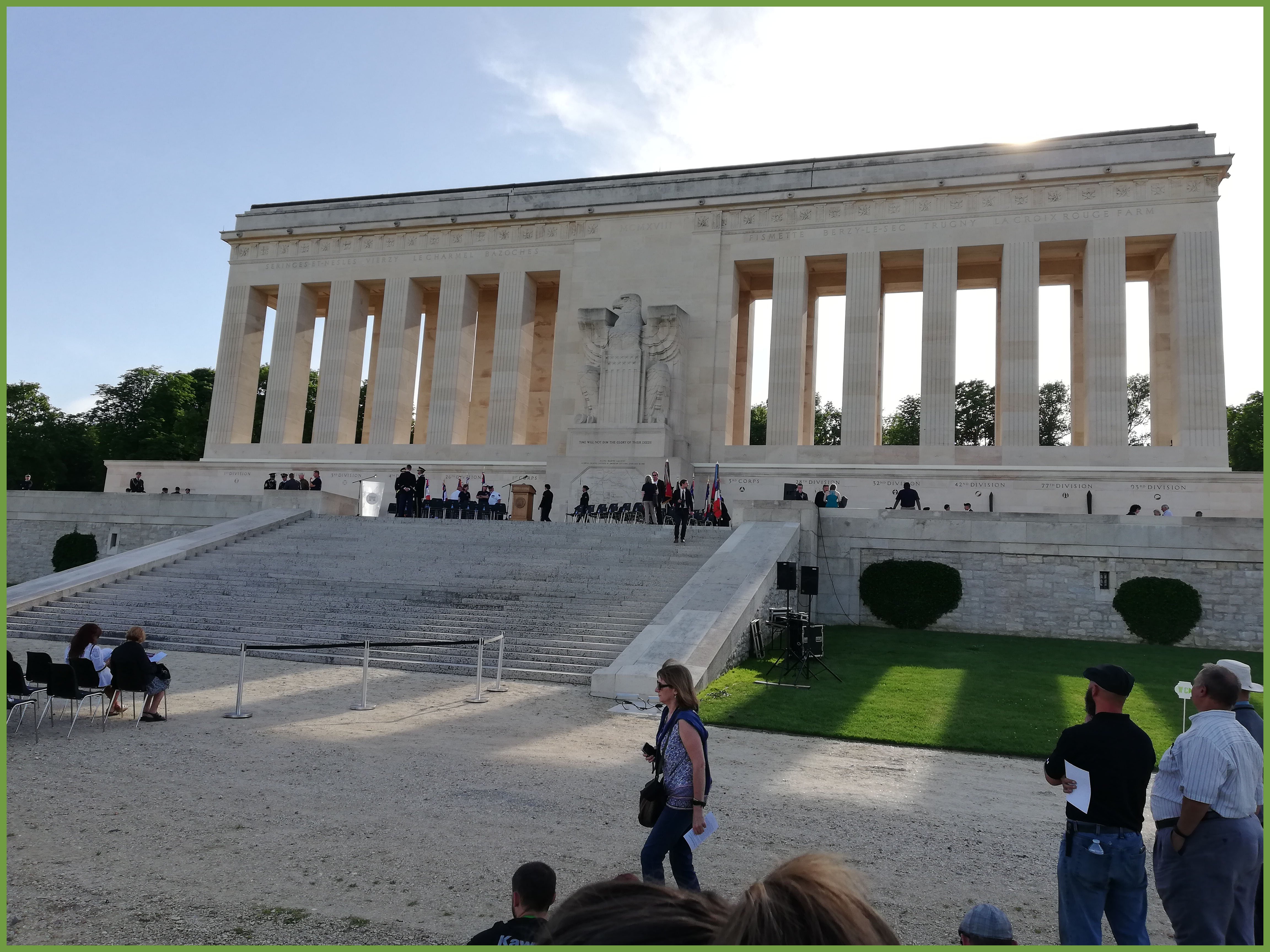 War in Europe is often associated with the US Army, but during the early years of the conflict, in spring 1941 Prime Minister Winston S. Churchill asked President Franklin D. Roosevelt to send American troops to Iceland to prevent Nazi Germany in taking and occupying the country.

Iceland was neutral but as Germany had just invaded Denmark, the 1st Provisional Marine Brigade commanded by General John Marston VI (its elements were taken from the 2nd Marine Division) sailed out from Newfoundland in Canada to Iceland onboard the USS Heywood and USS Fuller, replacing the British troops. 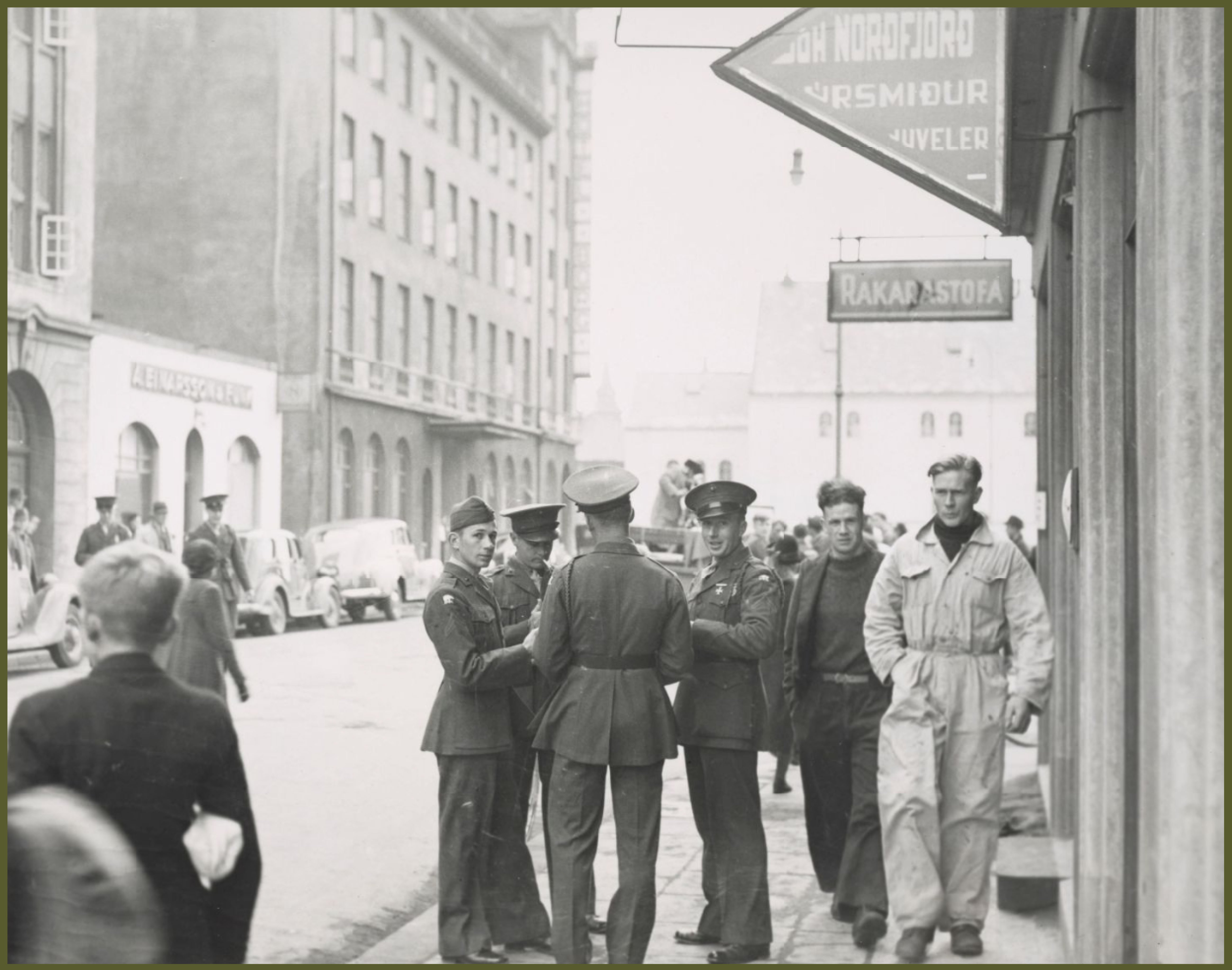 During the month of June 1918, the soon to be famous 4th Marine Expeditionary Brigade under the command of Lieutenant General James Guthrie Harbord succeeded in stopping the German breakthrough at Belleau wood in the vicinity of the city of Château-Thierry and prevent Paris to fall.

The battle of Belleau wood is considered as the American Army’s first battle on European soil. After three weeks of rough battles, Belleau wood was officially freed.

The 4th Marine Expeditionary Brigade lost around 60% of its men, 1000 were killed in action. 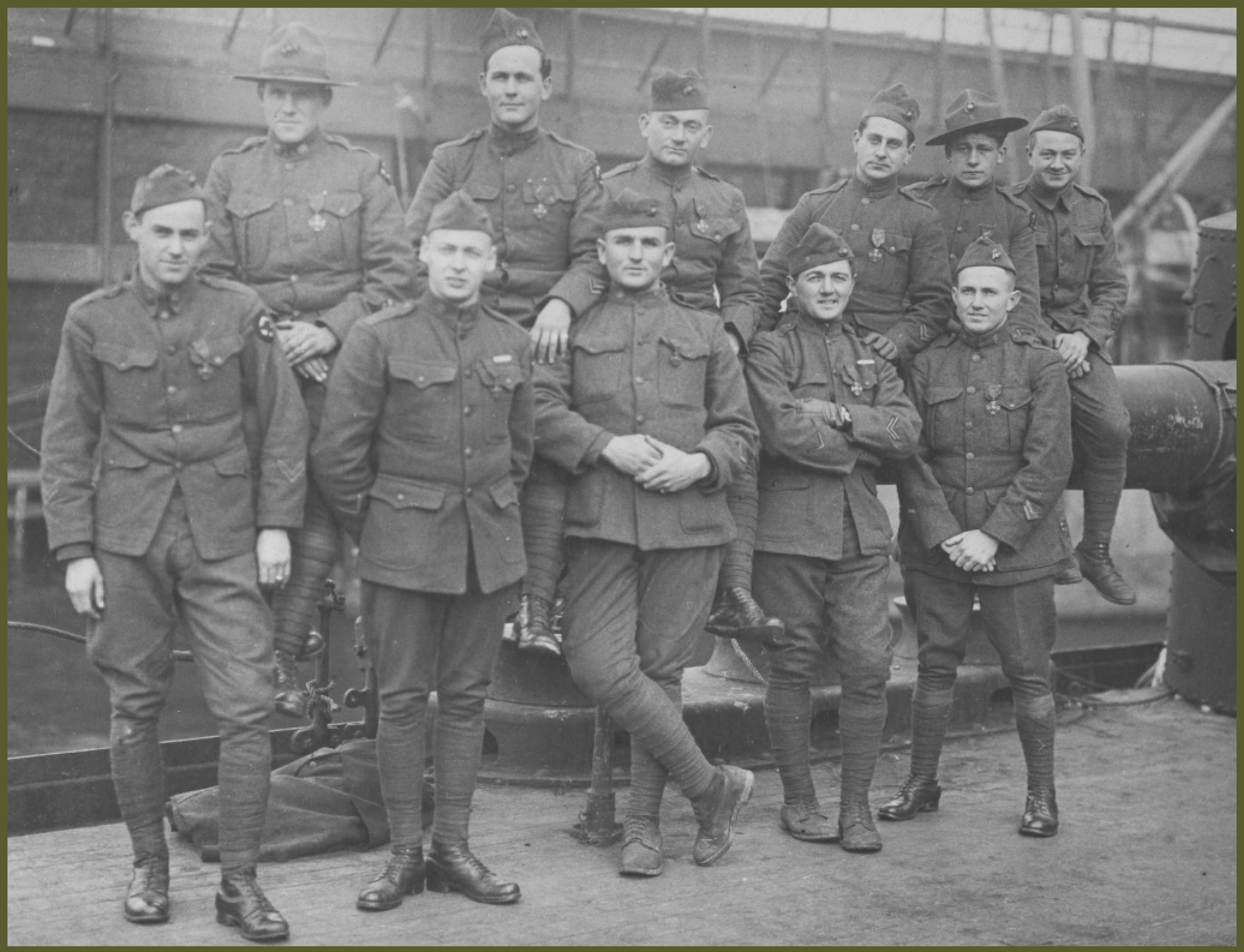 Some of the heroes of Chateau-Thierry and Belleau Woods who were presented with the Croix-de-Guerre. 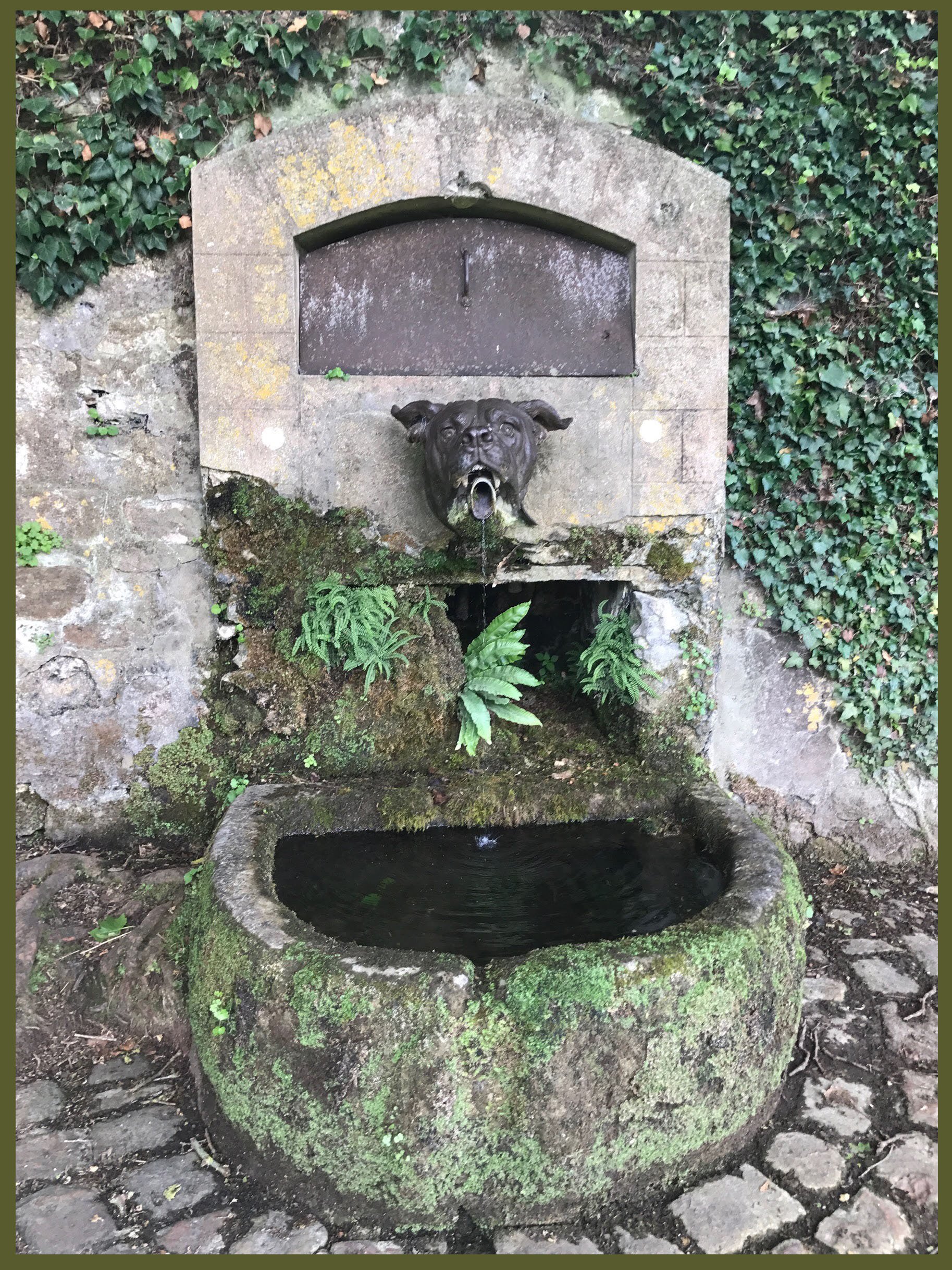 The American troops fought so hard that the Germans nicknamed them “Devil dog”. The bulldog became their mascot named "Chesty".

Each year during the Memorial Day in May, soldiers of the United States Marine Corps come to pay tribute to their fallen at the Aisne – Marne Cemetery in the morning and in the afternoon at the Oise - Aisne Cemetery.

The tradition wants that every Marines come to drink some holy water at the “Bulldog Fountain” in the village of Belleau. 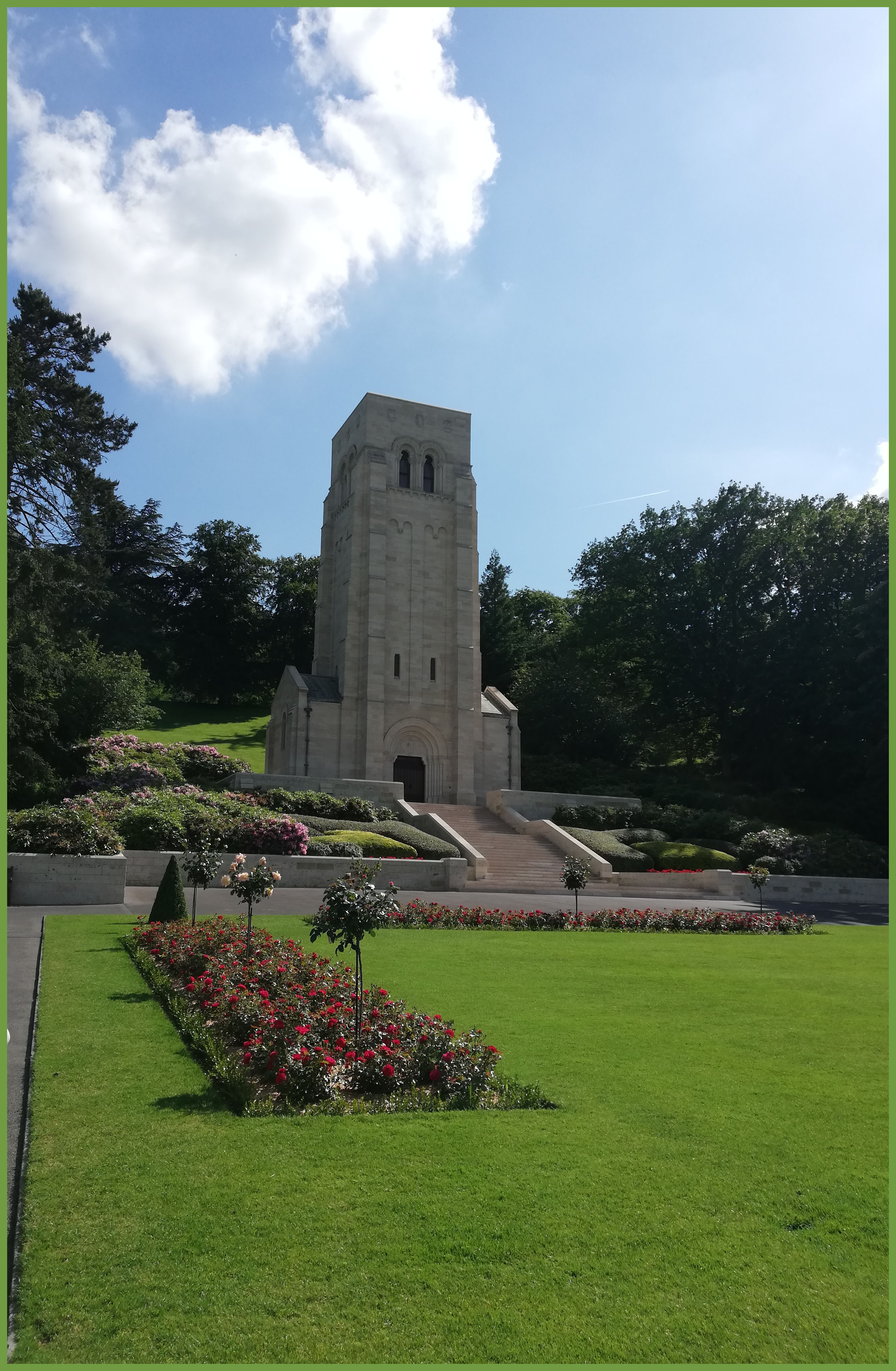 The famous USMC Rifle Creed was written by the General William H. Rupertus.

In the early years of the 50s it was questioned to dismantle the Corps but the success of it actions during the Korean war allowed it to remain active. 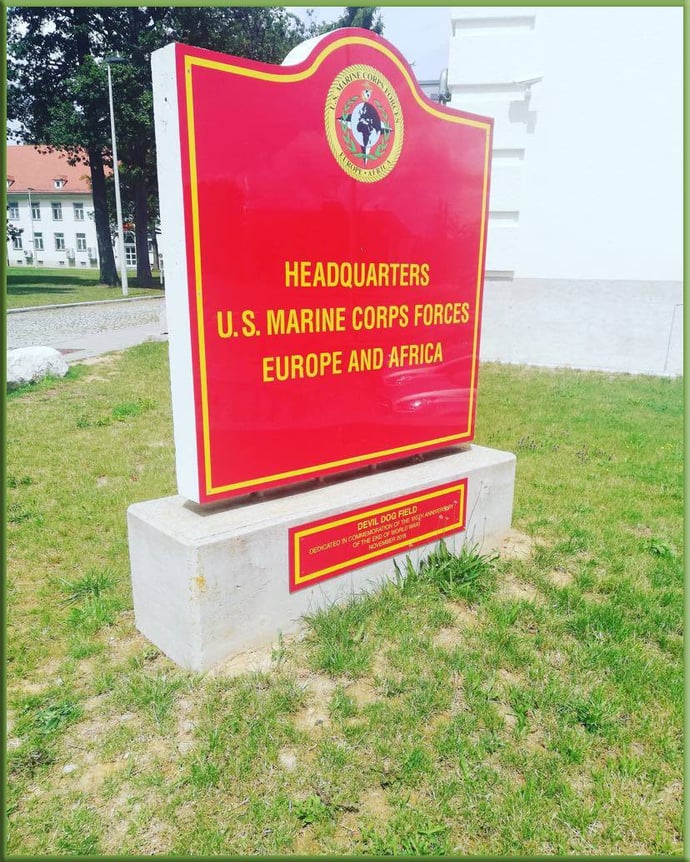 “United as one, we fight as a team and forever we will all be green”

On the 10th of November 2020, the United States Marine Corps celebrated 245 years of service, from its birth in 1775 to nowadays it has always answered the Call of Duty all around the world to maintain peace.