To the Utmost Extent of our Power, 60th objective Barneville-carteret 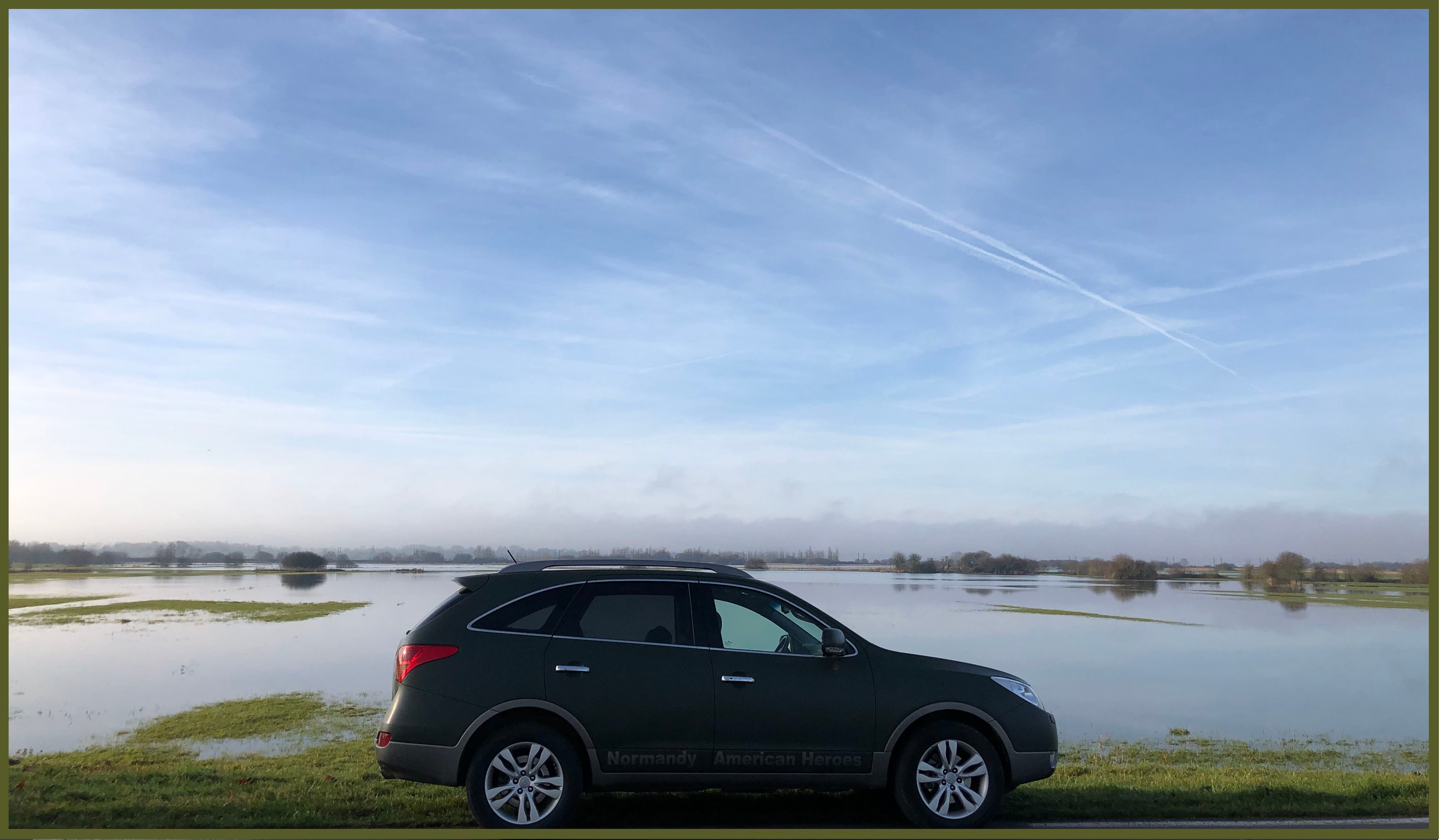 Change of plan for 2nd Battalion of the 60th Infantry Regiment

The 2nd Battalion went on the road at the northwest of Renouf to the road junction coordinates 259954, passing by the trail to Reigneville-Bocage.

Captain Sprindus commander of “E”Company,  as usual, was isolated from the rest of the battalion due to deploying too fast up.

The feeling of fear started to emerge, the men didn’t want to dig in because the Germans were all around them. What was to happens, happened!

The next morning, June 15th, 1944, Germans went right on “E”’ Company  men, fighting begun between the two camps and the withdrawal of the Americans was unavoidable.

The heavy fire met by the 2nd Battalion at Reigneville-Bocage forced Major Max Wolf to change the plan of attack.

Instead of attacking Orglandes (47th Infantry Regiment was then assigned to attack Orglandes),  the 2nd Battalion had now the mission to take the high grounds South of the village of Sainte-Colombe. They were to hold it until dark, push forward all the way to the bridgehead made by the 82nd Airborne Division and then cross the Douve river at Sainte-Colombe.

At 10:00 hours elements of the 2nd Battalion started their advance by crossing the swamps and mud field with the weapons, which vehicles were not able to drive thru due to the terrain.

“E” Company  was in the lead with a platoon of heavy machine guns attached to it.

“F” Company was in second followed by “G” Company.

“H” Company  which had a mortar platoon led by Lieutenant Hermann remained on its initial position to support the leading companies. 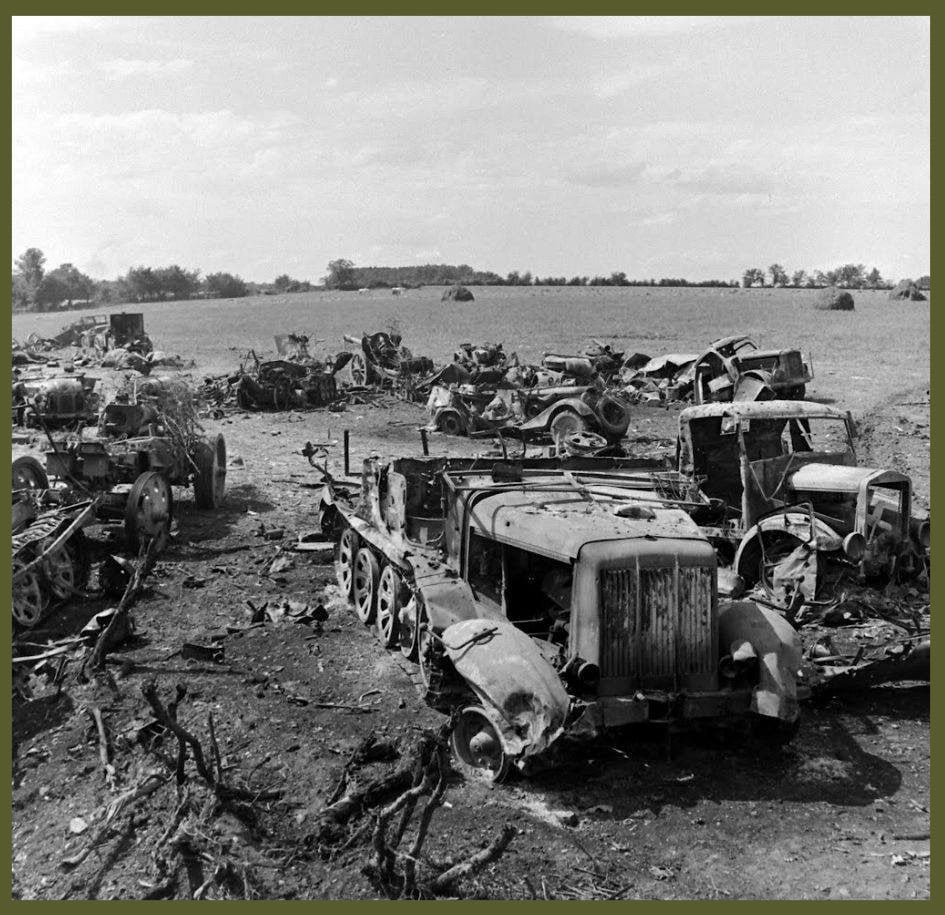 While men were on their way to crossroad coordinates 2197, the roads, fields were jammed with abandoned German vehicles and equipment’s.

At the crossroad, “H” Company under the command of Captain Don West caught up with the rest of the battalion and set up his mortar as support.

A couple of minutes after reaching the crossroad (around 15:00 hours) the Germans hidden in houses up the road fired with their machine guns.

Sergeant Wallace Burr testified: “Immediately “E” Company  with its 2nd Platoon deployed, entered in the orchard to the North of the crossroad and made a “Helluva rack with rifles, BARs and everything we had”.

Sergeant Clarence Molber commander of the 3rd squad and Sergeant Irvin Etzler commanding the 1st squad worked their way down through the orchard to the houses, forced the remaining more or less 16 Germans to surrender.

The rest of them were killed during the charge. Private First Class Daniel Smith described as the best gunners of the regiment went at the West of the crossroad and killed several Germans.

The rest of the battalion went out of the crossroad making a wide arc to the North, four enemy tanks were spotted along the road. “E” Company  entered the town of Sainte-Colombe without meeting other oppositions.

The whole battalion entered the village, “E” Company  seized the first bridge over the Douve intact, cross it but the 2nd one was blown to pieces.

The American tanks supporting 1st Lieutenant Edward Johnson 2nd Platoon of “F” Company  were unable to cross and became targets for the antitank German guns. Without knowing it, the battalion had passed enemy artillery positions! It was about 16:00 hours. The fire from the artillery positions killed 4 Sergeants and “E” Company asked for a platoon of heavy machine guns. The men thought the fire was coming from the village of Nehou

Lieutenant Thomas Wiggins, commanding the 1st machine gun Platoon, went forward to reconnoiter. Once he did, Lieutenant  Wiggins went back to Sergeant Albert Shelby of “E” Company . Unfortunately he was hit while attempting to go forward. All men of the machine gun Platoon were demoralized, Corporal Mack T. Quinn took over. Everyone was hollering for medics.

All elements of the 2nd Battalion started to pull back while Lieutenant Allen went into the 3rd Battalion’s positions for support.

Mortars from “M Company ” had taken positions on the higher ground on the East edge of Sainte-Colombe and fired all they had on Nehou!

Around 19:00 hours, the 2nd Platoon of “F” Company was about to dig in for the night when it was ordered to go back into the village to take position along the stone wall of the church, astride the road just in front of “H” Company . The area was shelled by the enemy but they took position nevertheless. The other elements of “F” Company  arrived a couple of minutes after. The 1st Platoon under Lieutenant Allen dug in just in front of HCO. Lieutenant Gallo then deployed his 3rd Platoon in position to the 2nd Platoon’s left.

At this time the situation for the men of the 2nd Battalion was pretty bad, pretty desperate as they were running out of ammunition, receiving intense artillery German fire. Their only hope at that moment was the support of the tanks and mortars firing on Nehou.

Colonel Kauffman had left the frontlines in search of ammunition, Major Wolfe also sent someone back for ammo. He then went back, passing the 3rd Battalion to ask them if they could provide a supporting fire.

Colonel Kauffman came back from the rear with a two and half ton truck full of ammunition and word from General Joseph Collins that the 3rd Battalion would move in support.

Note: When Colonel Kauffman went back to the CP asking for ammunition, General Donald Armpriester Storh, Assistant Division Commander told him to withdraw but General Collins refused as the 2nd Battalion had established a bridgehead!

All companies were badly shaken from the enemy fire to the South, left rear, and from Nehou. The assault on the village had to be postponed due to the lack of support of the tanks and coming darkness.

At 22:00 hours both artilleries fired on each other, creating confusion!

In the middle of the night the 3rd Battalion moved to support the 2nd Battalion and both attacked Nehou at 07:00 hours the next morning.

For a reason that only God knows, the Germans had by then evacuated the village!

Lieutenant Colonel (then Captain) Matt Urban was awarded the Medal of Honor for a series of heroic actions, during the period of the 14th of June to the 3rd of September 1944. Matt Urban was fighting at Renouf on the 14th of June with the 2nd Battalion of the 60th Infantry Regiment. If you wish to discover his story, Normandy American Heroes invites you to read his incredible, unique story: “THE GHOST OF NORMANDY, THE MOST DECORATED SOLDIER OF US HISTORY”

Cutting the Peninsula – 3rd Battalion of the 60th Infantry Regiment

The village Saint-Jacques-de-Néhou (D-42) which was the original objective of the 60th Infantry Regiment was taken on the afternoon of the 17th of June 1944 by the 3rd Battalion.

Ever so, it was not the end of the mission! Additional orders arrived late afternoon: the seizing of a crossroad coordinates 1098, southwest of Le Valdécie (D-50) and the high grounds West. The idea? Cut the main roads running West to Barneville-Carteret and southwest to Fierville-les-Mines – Le Mesnil – Saint-Marc all the way to the sea.

At 18:00 hours the men left their positions at Saint-Jacques-de-Néhou and were advancing along the road.

The 3rd Battalion advanced with the support of the 1st Battalion on its left, the 2nd on its right. A platoon of tanks of the 746th Tank Battalion was attached to the 2nd Battalion.

After three hours of crossing fields, orchards, men reached the crossroad at 21:00 hours without meeting opposition, some Germans were picked up along the road.

As no opposition was encountered, General Manton S. Eddy decided to take advantage of it, and ordered to drive immediately to the sea, it meant push forward to the biggest coastal town of Barneville-Carteret.

A couple of minutes before heading for Barneville, something happened. After several days of rough fightings, the war won against Major Gail H. Brown pushing him to his limits, what is known today as PTSD. The Major was relieved by Captain Keene N. Wilson of “K” Company, due to suffering of exhaustion from the preceding days of fighting.

At 22:00 hours, the men jumped off with “K” Company, now under command of 1st Lieutenant Leo C. Williamson.

The company was loaded on 5 tanks, 4 tank destroyers and on 4 halftracks from the anti-tank platoon. “M” Company rode on its organic transportation while the rest of the battalion walked.

The first enemy resistance was encountered two miles at the West of the crossroad, the battalion wasn’t aware of the strength so it decided to deploy itself for action.

The gun emplacement contained only one anti-tank gun which was firing on the leading tanks, fortunately only one halftrack was knocked out. This anti-tank gun held up the  battalion for 2 hours. Incidentally Major Wilson admitted feeling embarrassed for having being held up by only one gun!

At (Hamlet) Hameau Villot, Captain Diguini (then 1st Lieutenant, Executive Officer of “M” Company), Major Wilson, the S-2 Lieutenant Cleaves and Captain Roy Smith of “L” Company and Captain Williamson of “K” Company dismounted to study their maps and made a reconnaissance.

During the reconnaissance on the road North South of Barneville–Carteret – Port-Bail, the officers split up. Captain Smith and Captain Diguini went one way while Major Wilson and Lieutenant Cleaves went another to make a more detailed reconnaissance. Captain Smith and Captain Diguini walked up the main North South highway, saw some Germans on bicycles and separated, hiding into a hedgerow to avoid them.

After this reconnaissance, the battalion resumed its march to the main North South road of Barneville-Carteret – Port-Bail by cutting it. “K”  Company was in lead riding on the armored vehicles. “L” Company took the right flank, “I” Company the left flank with machine guns from “M” Company attached to them.

In the early hours of the 18th of June 1944 between 05:00 and 05:30 hours, the 3rd Battalion took position on the high ground from which it could look on Barneville-Carteret. The first thoughts according to some prisoners made during the advance was that the Germans had left the town, but the Americans stayed cautious.

As the American troops didn’t know if the German prisoners were telling the truth a plan of attack and defence was made.

During the first minutes of combat, the city seemed all quiet, “K”  Company took by surprise some German MP prisoners but 15 minutes later Germans arrived from all directions, some attempting to get back into town.

The Germans had waited that the Americans took position around the town to counterattack them and surround them!

During the night the Germans attacked by small groups to test out the American positions.

The next morning, June 19th, 1944, at 10:00 hours serious things begun!  125 Germans counterattacked at the southeast in “I” Company sector, capturing and making 85 American prisoners of war, among them Lieutenant Joseph Rappizini from the anti-tank platoon.

At 14:00 hours, an 88mm gun appeared towed by a truck with its crew. When the enemy learned of the presence of “K” Company, they withdrew but “K” Company  machine gun stopped the vehicle and got all the crew. Later a large enemy vehicle entered the town full of troops, but a shell from a tank destroyer forced the truck to stop and a second knocked it out. While Germans climbed out, machine guns pinned them down. Mortars of “M”  Company then took over and finished the job.

After an ultimate attempt to seize the town by land which ended badly, the Germans made an attack by sea! Tank destroyers stopped them by firing on a boat at the port of Carteret.

No main German counterattack was made to seize Barneville-Carteret, only small groups. Some of them were unaware of the American presence as Germans were still bicycling in the town! If a large-scale counterattack didn’t take place, it's thank to the Air support.

The Air Force bombed, machine gunned all the roads from the North to the East of Barneville–Carteret giving no respite to the enemy. 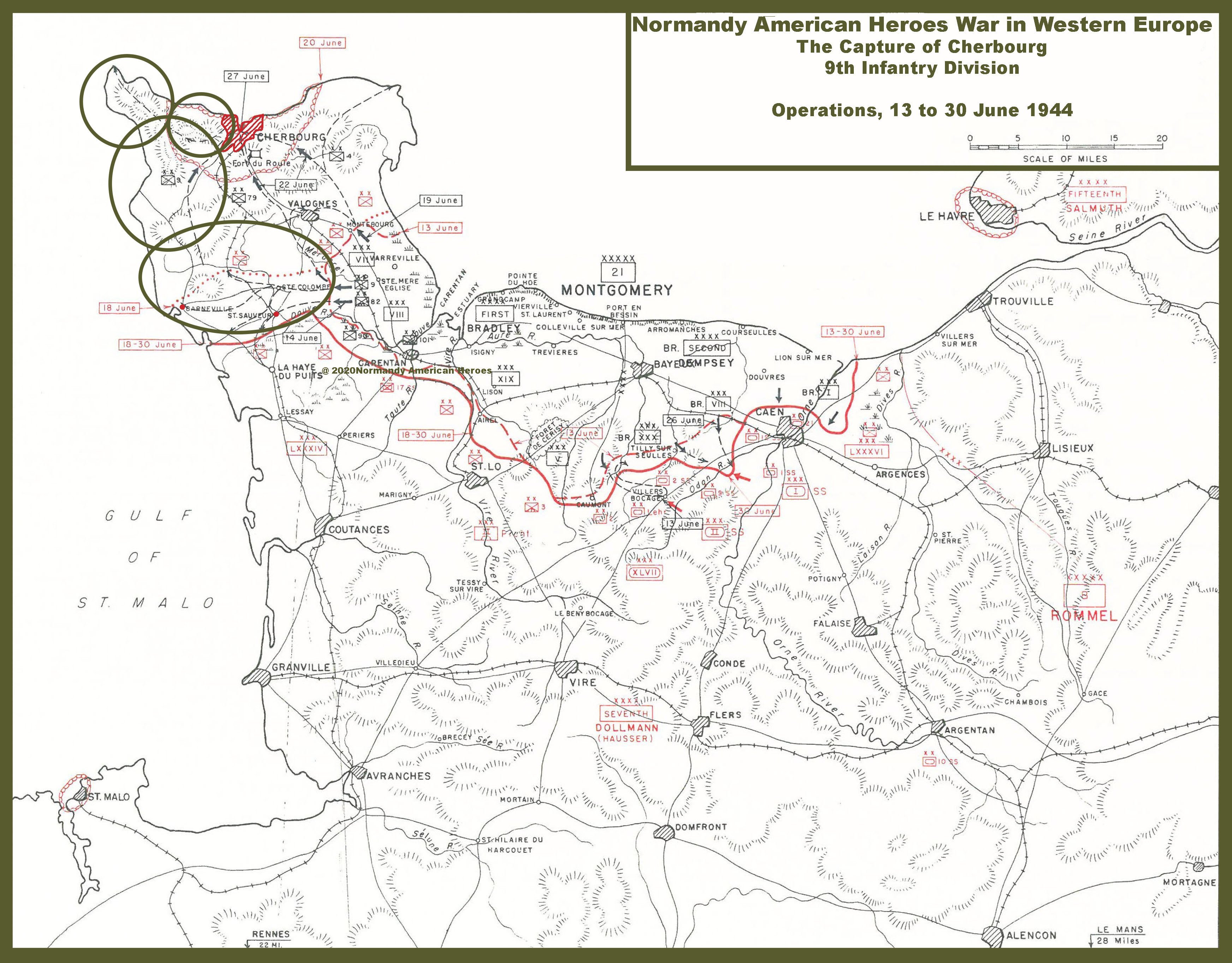