Frederick C. Murphy was born in Boston, Massachusetts, on July 27, 1918, and lived in nearby Quincy.

He was a 1939 graduate of Thayer Academy, a private school in Braintree, Massachusetts.

Murphy married his high school sweetheart Virginia Maxwell and enrolled at the University of Pennsylvania in the fall of 1939.

After the infamous attack of the Japanese at Pearl Harbor, Frederick will try twice to join the Army but failed the physicals and was classified 4-F.

Finally, after having corrective back surgery, he was able to enlist in the Army’s medical program in November 1943, enlisting at Weymouth, Massachusetts where he lived.

He became a medic and served with the 259th Infantry Regiment of the 65th Infantry Division which landed in Le Havre, France on January 21st, 1945.

They will train at the Camp Lucky Strike near Saint-Valery-en-Caux, about 80km north from Le Havre before heading to the Moselle department which they reached on March 3rd, 1945.

After a 600 km journey, they reached the town of Villing, in the Moselle department on March 17, 1945 to join the Third Army of General Patton attacking the infamous West Wall known by the allies as the Siegfried Line.

The next day, March 18th, 1945 the 65th Infantry Division under the command of Major General Stanley E. Reinhart launched its frontal attack on Saarlautern, (Saarlouis) Germany to pierce thru the Siegfried line.

Frederick was an aidman. He was wounded in the right shoulder soon after his comrades had jumped off in a dawn attack against the Siegfried Line at Saarlautern, Germany.

He refused to withdraw for treatment and continued forward, administering first aid under heavy machine-gun, mortar, and artillery fire.

When the company ran into a thickly sown antipersonnel minefield and began to suffer more and more casualties, he continued to disregard his own wound and unhesitatingly braved the danger of exploding mines, moving about through heavy fire and helping the injured until he stepped on a mine which severed one of his feet.

In spite of his grievous wounds, he struggled on with his work, refusing to be evacuated and crawling from man to man administering to them while in great pain and bleeding profusely.

With indomitable courage, and unquenchable spirit of self-sacrifice and supreme devotion to duty which made it possible for him to continue performing his tasks while barely able to move, Private First Class Frederick Murphy saved many of his fellow soldiers at the cost of his own life.

He was killed by the blast of another mine which he had dragged himself across in an effort to reach still another casualty leaving behind his wife Virginia a widow with a soon to be born baby daughter.

Frederick Murphy is resting today at the Lorraine American Cemetery and Memorial in France.

The Lorraine American cemetery covers 113.5 acres and has the largest number of graves of our military dead of World War II in Europe, a total of 10,489.

Most of the dead here were killed while driving the German forces from the fortress city of Metz, France toward the Siegfried Line and the Rhine River.

Since April 18th, 1994, the National Archives facility in Waltham, Massachusetts is named the Frederick C. Murphy Federal Center to honor Private First-Class Murphy’s service, heroism, and sacrifice. The site was initially an Army hospital for WWII veterans returning from overseas service and named the Frederick C. Murphy Army Hospital until 1957. 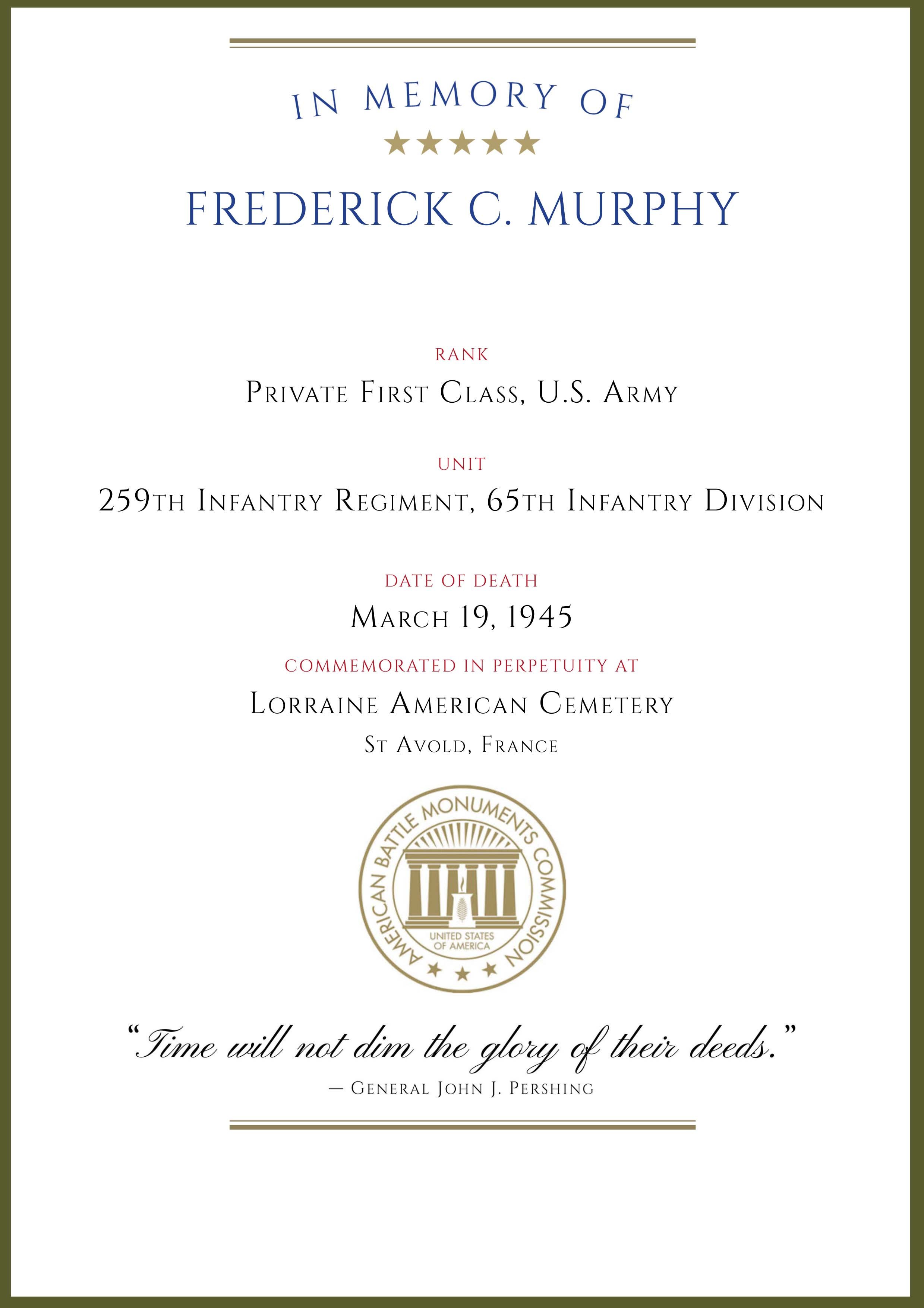