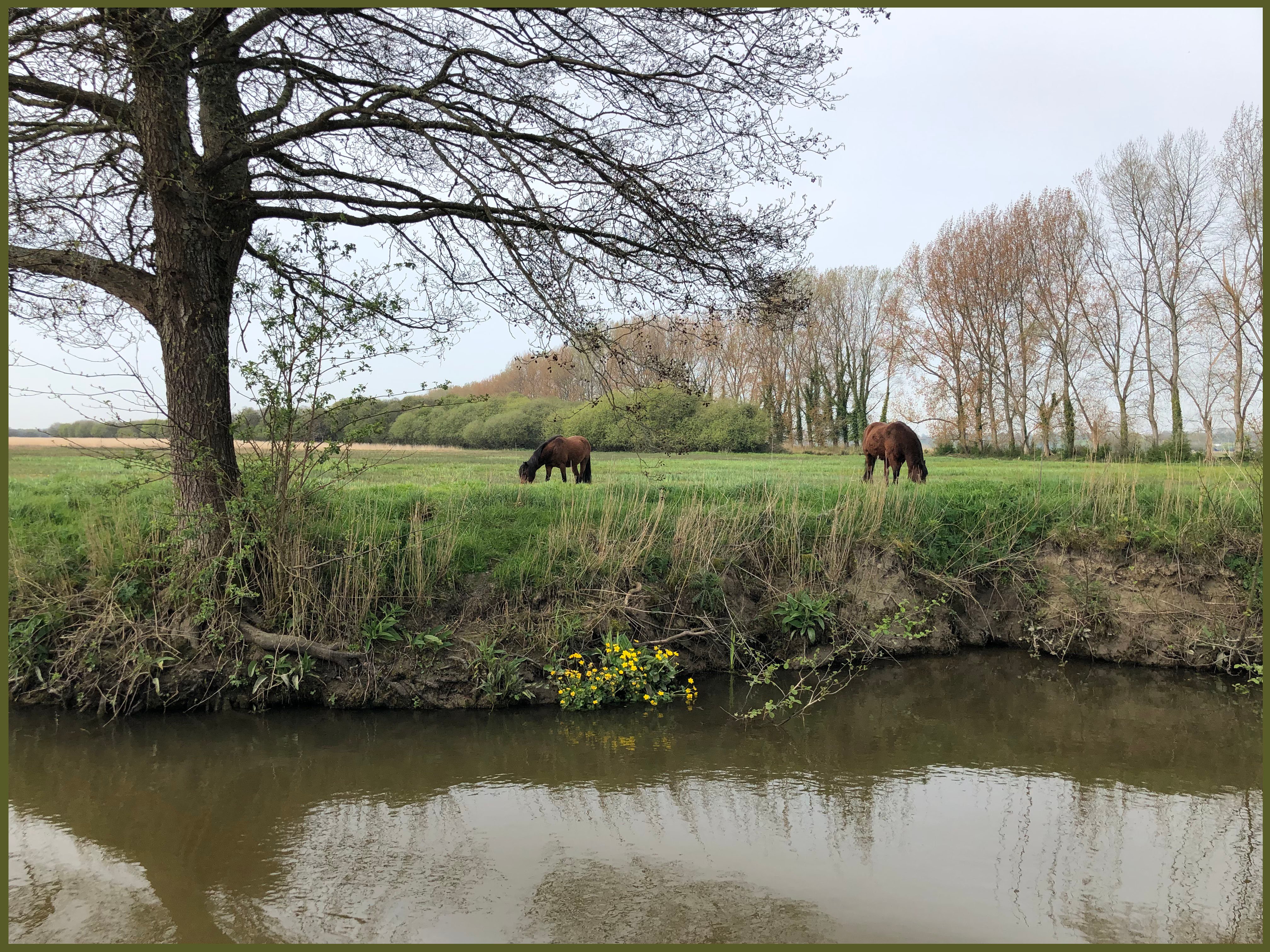 Two days after their arrival on the soil of France, June 12th, 1944, the 1st Battalion of the 39th Infantry Regiment led by Colonel Harry A. Flint began to cross the inundated area along the road Ravenoville – Saint Marcouf.

Their mission? Silence all German strongpoints along the coastline.

“A”, “B” and “C” Companies  had to cross inundated swamps and roads fighting along their way pillbox’s, bunkers and anti-tank gun emplacements.

The heaviest fire was encountered when “B” Company men arrived in the outskirts of the battery of Saint Marcouf, while the men of the 4th Infantry Division met the outposts which defended the same battery.

An artillery bombardment was falling on the battery before the men jumped off to assault it.

At 21:30 hours, “B” Company  was leading the attack with its 2nd and 3rd Platoons while “A” Company  was on its left to support it.

Lieutenant Colonel Philip C. Tinley was leading the attack armed just with his pistol. The men had to cross an open field which caused more or less 27 casualties among the rank of “B” Company, the outposts which were pillbox’s, were well protected and machine gun nests and gun emplacements prevented the tank destroyers to fire on them.

To allow the men of the 1st Battalion to succeed in their mission, the Division Artillery fired 105mm shells on the Germans. When the men of “B” Company were about 100 yards from the first enemy emplacements, the 105 mm guns silenced them. The rest of the job was done by “B” Company throwing grenades and shooting bazookas. 30 German prisoners of war were taken.

After the attack, the three companies set up a line of defense for the night in the woods South of the village of Saint Marcouf, then some patrols were sent into town to reconnoiter.

In the early hours of the 13th of June, “C” Company attacked the German emplacements into the town itself. Lieutenant Daysh from the Antitank Platoon lost his leg marching on a mine as he tried to pull a gun into position. During the rest of the day, tank destroyers were brought onto the frontlines to support the men of “C” Company.

By the end of the day the Americans were into Saint Marcouf, precisely at the North of it but no further advance was made that day.

On the 12th of June 1944, the 3rd Battalion of the 39th Infantry Regiment was in the vicinity of the village of Fontenay-sur-Mer, precisely along the trail running South of the road junction coordinates 343056.

This battalion passed through elements of the 22nd Infantry Regiment of the 4th Infantry Division meeting no serious opposition that day, only sniper fire.

The next day men of the 3rd Battalion were ordered to turn North toward Quinéville, then made a 90 degree turn and advanced across flooded open fields during the whole day.

On the 14th of June 1944, the men were positioned on the right flank of the 22nd Infantry Regiment to attack the village of Quinéville simultaneously.

At 10:00 hours the attack started: the 3rd Battalion was advancing parallel to the 22nd Infantry Regiment (East along the North of the main road) with “K” Company along the road and “L” Company to its right.

As the Germans were holding their positions, Colonel Harry A. Flint who was in a house south of the village asked for the support of four tanks from the 1st Platoon of “C” Company of the 70th Tank Battalion commanded by 1st Lieutenant Harry Schneider.

A couple of minutes after 17:00 hours, the 3rd Battalion decided to attack by cutting thru the beach.

Captain William D. Weaver commanding “K” Company led the attack. The advance was made by column of platoons:

The leading Platoon (3rd Platoon) advanced without too much difficulties as it had taken 68 prisoners of war who had fled Quinéville. The platoon was hiding in the grove because of the German firing on them with mortar shells.

Captain Weaver went ahead of the 3rd Platoon to overlook the whole town.

At 17:30 hours the men succeeded in reaching the main crossroad where two BAR’s were deployed. One to fire down the street to the East, the second to fire to the North.

As Lieutenant Jones was on his way toward the beach, one German came out of his ditch waving a white flag but one BAR opened fire on him!

To answer back this treachery attack, the Germans started to reopen fire with their mortars hitting the Lieutenant.

Technical Sergeant Marion F. Lewis took over the 3rd Platoon and pulled a squad and a half out of the street into a courtyard, then went out to get the rest of the platoon but a bullet hit him.

In the meantime, 1st Platoon led by Lieutenant Odess reached the town encountering machine gun and mortar fire. They managed to take a few prisoners of war then succeeded in making it to the northwest part of Quinéville.

The 4th Platoon was ordered to stay outside of the town to create a support fire with its mortars then to take some of its light machine guns and join Lieutenant Odess.

Then, elements of the 3rd Platoon organized itself, mortar fire was still falling on the town. Lieutenant Brugger from the 4th Platoon decided to ask some prisoners of war the location of the mortars. The German prisoners replied that the barrage of fire was coming from some emplacements southeast of the town at coordinates 376080.

Lieutenants Odess and Brugger had had the same thought. Lieutenant Odess wanted to use the prisoners to convince the rest of the enemy garrison to surrender.

Lieutenant Odess was standing in front of a house when a German bullet hit him in the ankle. Private Hale was sent to Captain Waver CP at the crossroad to inform him of the situation.

As the house in which men were, was receiving heavy fire, Lieutenant Brugger decided to go to the CP.

Technical Sergeant Anthony Waverck was in charge of the platoon and asked to set up the mortars and the light machine guns but when the Lieutenant returned, all the mortar section was knocked out (12 wounded and 2 killed) while they were deploying their weapons!

Meanwhile Lieutenant Davis in charge of the 2nd Platoon entered the town, cleared its objective and helped the 1st Platoon. As the other platoons, it took prisoners of war but was under intense mortar fire.

Late afternoon it was decided to withdraw the 1st and 3rd Platoons which were encountering heavy fire and taking a toll of casualties.

Lieutenant William Termini of “M” Company fired on the hamlet’s church at the West of Quinéville with his heavy machine guns.

1st Lieutenant Paul Lynch of “L” Company  fired 1450 rounds of a 60 mm mortar on the North side of the church.

The German machine guns and mortars were hitting continuously the American troops, they were unable to attack the German positions so Lieutenant Colonel Robert H. Stumpf, at the CP, asked for all the support he could get: artillery, tanks, machine guns, mortars!

Finally Lieutenant Schneider arrived with two tanks but he withdrew at the first sign of German guns.

As the German fire was pinned down, the 3rd Battalion received the order to withdraw but the 3rd squad of the 3rd Platoon were still firing on the Germans. Staff Sergeant Bruce Perry Jr had not withdrawn with the rest of the platoon, and was all alone with his men against the Germans on the frontline.

His squad had attempted to hit some bunkers and pillbox’s without success. Nevertheless, the continuous fire from their BARs forced the Germans to surrender the town.

Lieutenant Bugger felt they had had a decisive effect on the whole action because it was thanks to Staff Sergeant Bruce Perry Jr BAR's squad that the Germans surrendered around 21:30 hours.

At least 100 prisoners of war were taken, they all said that their officers had run away when things started to become pretty bad.

Captain Leo Gowen mounted a tank and rode down to the CP where an aid station was set up. The Captain sauntered to the CP whistling and smiling, surveyed the situation, went back and got 6 medics and a jeep which came through heavy mortar fire to take care of the wounded.

The next day, the 39th Infantry Regiment was detached from the 4th Infantry Division.

Lieutenant Colonel Harry A. "Paddy" Flint graduated from the U.S. Military Academy at West Point, Class of 1912. At more than 50 years of age, he was considered too old to serve overseas as a combat commander in World War II, but with the help of high-placed friends, such as General George S. Patton, Jr., he was assigned command of the 39th Regiment in Sicily in 1943. There he created the famous battle slogan, "Anything, Anywhere, Anytime, Bar Nothing!"

Flint was hit by a sniper's bullet July 25th, 1944 as he led the patrol into the shelter of a farmhouse during the fighting on the Saint-Lô-Périers road. Medical aid men and stretcher bearers evacuated him to a treatment area behind the lines, where Flint died the following day. He was buried first at the United States Military Cemetery No. 2 of Sainte-Mere-Eglise, France. He is resting today at Arlington Cemetery with his wife.