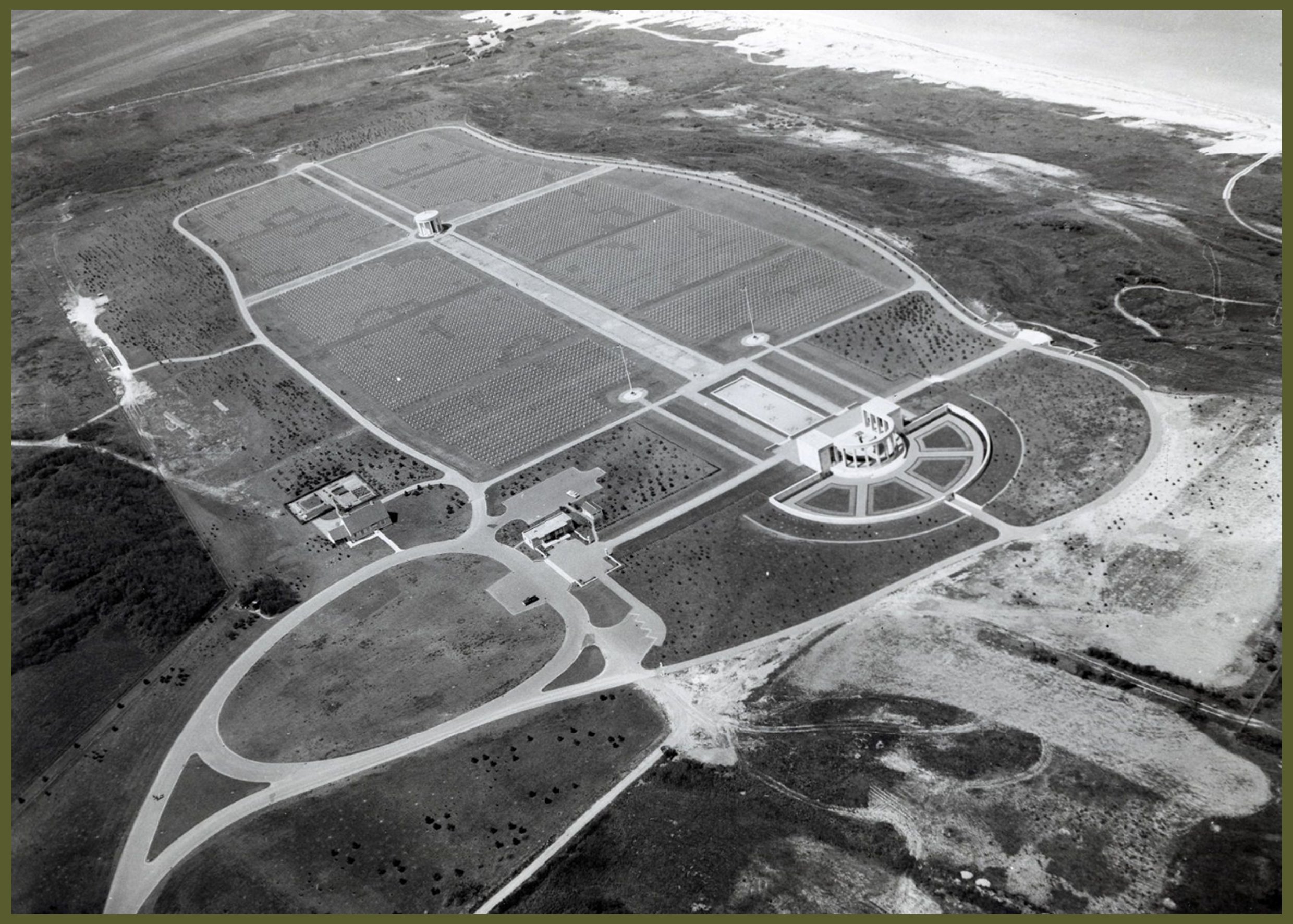 1,213 Allied warships were scheduled to take part in the code-named Operation Neptune, approximately 210 were American.

Of the three battleships, one was the USS Nevada which had survived Pearl Harbor attack and whose main objective was the German battery of Azeville. The American Navy had also three heavy cruisers and 30 destroyers.

The Western Task Force under the command of Rear Admiral Kirk’s consisted of three component parts:

The ships came out of assembly ports from South West England & Northern Ireland on June 4th 1944. The numerous convoys headed first toward Area Z – Piccadilly Circus – a rendez vous point located southeast of the Isle of Wight near Portsmouth.

Due to weather conditions the initial landing was postponed: Force U, Task Force 125 had no choice but to navigate offshore Portsmouth refueled thanks to Force O, Task Force 124, having no time to make it back to its ports of origin. The soldiers of the 4th Infantry Division stayed aboard the vessel the longest of all Allies soldiers.

General Eisenhower will then make the decision from Southwick house “Ok let’s go”.

The ships will then head into one of the 10 swept channels through the German laid floating mine fields off the French coast, Force U being the most exposed, navigating close by the Peninsula Cotentin coastline.  Far to the east and west of them were arrayed naval covering forces consisting of antisubmarine escort carrier groups and destroyer squadrons. 64 minesweepers will be dedicated to Force U. All of the assault convoys will reach their assigned sectors as early as 2 am on Dday.

Rescue Flotilla One consisted of sixty 83 foot patrol boats known as the “matchbox fleet”. They were able to rescue hundreds of men from the 46 Fahrenheit water off the coastline, often under heavy enemy fire.

Dday Veteran Jack Hamlin 93 years old from Springfield, Missouri served in Rescue Flotilla One of the US Coast Guards and took part in the invasion landing at Omaha beach.

LCK (L) Flotilla 10 was composed of 24 Coast Guard manned Large Infantry Craft (LCI(L) and unloaded hundreds of troops & tons of equipment to Omaha beach at the beginning of Operation Neptune.

There is no official headcount of casualties for the Rangers, Infantry & Airborne Divisions but there is for the US Navy and Coast Guards: 1008 men died on Dday sacrificing their lives to save others

The 29th Infantry division – the “Blue and Gray division” – and the 1st Infantry division – the “Big Red One” assault landed onto what is still known today as Omaha Beach on June 6th, 1944. Seas were rough with waves up to 6 feet high and cross current were very strong. Many landing craft came ashore some distance from where they had intended due to the poor visibility, the strong current pushing them east and the overall confusion. German resistance which had not been expected as such; the Allies were not aware that the 352nd Infantry Division were deployed on Omaha, supported by significant obstacles, was well organized and determined. American units were all mixed up, exposed under heavy fire. Soldiers clawed their way onto the bluffs overlooking the beach and tried to outflank well entrenched extremely motivated German defenders… Meanwhile a contingent of the 2nd and 5th Ranger Infantry Battalions (the 5th Rangers battalion having had no confirmation of the success of the 2nd Rangers at La Pointe du Hoc changed their landing plan) fought their way ashore onto Omaha beach at Vierville sur Mer. In concert with the 29th Infantry Division and supporting units they opened up the way at the top of the bluff. They will finally relieve the embattled defenders of Pointe du Hoc on June 8, 1944 with the support of the 29th Infantry Division & the 743rd Tank Battalion. The courage under adversity of what is known today as “Bloody” Omaha Beach has since become an icon in the military culture of the American soldier and the public in general.

On June 6, 1944 the 2nd Ranger Infantry Battalion assault landed late due to the fact they were heading at the wrong landmark, La Pointe de la Percée. This surely saved the lives of some Rangers as the B26 Martin Marauder bombardiers were late too. The Rangers were to seize the dominant cliff-bound of La Pointe du Hoc and destroy German six heavy guns positioned there which had the potential to destroy enemy warships both at Utah and Omaha beach. Speed was the essence and the Rangers knew they had the highest single priority of any pre-invasion target. In spite of difficult seas, strong current, disruption and casualties getting ashore, the Rangers succeeded in climbing under heavy fire the cliffs. The first Ranger made it to the top at 07h08.

He was joined by others; they all progressed to their objectives as trained back in England. The designated targets were annihilated. Even though the guns had been moved to protect them from potential bombardments the Rangers pushed on to find and destroy them approximately 1 mile inland.

They also cut the coastal highway behind Pointe du hoc and fought back furious German counterattack from Granville to try and secure their gains. After two days of battle of the 300 Rangers who took part in the Dday landing, only 90 were still able to fight. 7 of them will receive the Distinguish Service Cross for their actions.

Utah beach (Manche department) - approximately 190 casualties
The 4th Infantry Division – the “Ivy Division” –was the FIRST to land in Normandy. The enemy had already been thrown in a state of total confusion thanks to the 15,000 paratroopers of the 82nd & 101st Airborne Divisions dropped in the Cotentin Peninsula as of 1 in the morning.

The first waves came ashore 2,000 yards south of causeway 3 & 4, their initial objective, due to obscuration of a crucial landmark (red roof top house north of what is known today as Utah beach), the guiding barges blowing up on Oyster sea mines, the smoke screen dropped by the Douglas bombardier of the Free French forces, the smoke screen provoked by the bombardments of the B26 Martin Marauder and last but not least the strong south-east coastal current. Nevertheless in less than 45 minutes they made their way inland against minimal opposition to capture the German fortification code name WN5.

29 of 32 Duplex Drive amphibious tanks supporting the attack made it ashore: 3 will blow up on an Oyster Sea Mine, more than 30 feet in the air. The DD provided invaluable armor support to the push inland thanks to the decision taken by Admiral Moon to bring them closer to shore.

Within 3 hours the 1st Engineers Special Brigade will have cleared the principal beach areas of significant obstacles enabling the further landing of reinforcements to proceed with no real difficulties.

By nightfall the 21,000 soldiers of the 4th Infantry Division went ashore intact, organized and equipped for further offensive action inland

The 82nd Airborne Division known as the “All American Division” – jumped into Normandy shortly after midnight. Due to miserable weather conditions a lot of paratroopers will be dropped way off course, the 507 PIR will find themselves in the heart of enemy approximately 20 miles from their objective, Sainte Mère Eglise. Their story is still known today as “Bloody Sunday”.

So the objectives of the 82nd Airborne Division were to capture the village of Sainte Mère Eglise, secure crossings of the Merderet & Fière rivers (swamped by the Germans), control what is known as the old National 13, control the railway (Caen – Cherbourg) and last but not the least, block the German counterattacks to Utah beach through its sector.

The 101st Airborne Division known as the “Screaming Eagle Division” had never been to battle. Some PIR had trained at the ATC in England to take down the German battery of Saint Martin de Varreville. As for their 82nd comrades, a lot of paratroopers will be dropped way off course, some in the swamps, some in the English Channel, some near Cherbourg!

Its main mission was to protect the landing of the 4th Infantry Division and its passage inland thru swamps provoked by the Germans. To do so it would have to take down two German batteries, Holdy & Brecourt. Brecourt was unknown to the Americans until it actually started firing at Utah beach!

Its key tasks were to capture causeway 1 & 2 through the flooded terrain surrounding Utah Beach, secure the southern flank of the landings on that beach, and block German counterattacks to Utah Beach through its sector. The paratroopers were to seize the locks at La Barquette, which could have been used to disastrously flood critical terrain near and around Carentan, the second objective of the 101st Airborne Division.