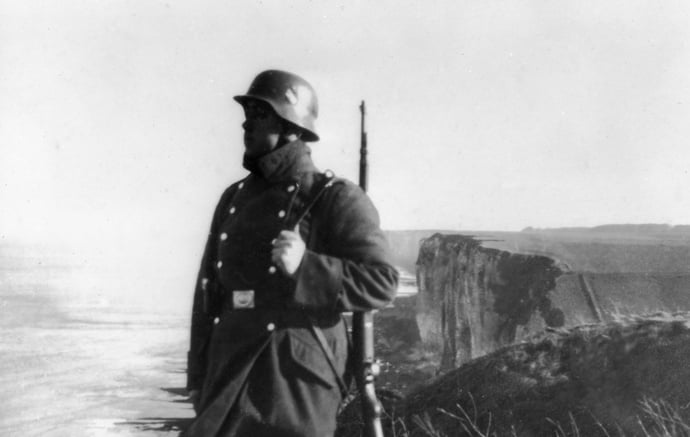 In the early spring of 1944, the German troops who hid behind the rampart of the Atlantic Wall were vastly different from those who had invaded the Cotentin Peninsula, believing themselves to be true conquerors, superiors who easily controlled both life and death…

Three long years of war on the Russian front had bled the proud Werhmacht white. Most German soldiers in Normandy had suffered up in the East fighting against the Russians; they had beem wounded in battle, and they had suffered from the extreme weather conditions of the Siberian winter. They were transferred to Normandy to recover from their wounds both psychologically and physically.

The majority of German troops under their command were not Germans, but soldiers drafted by force coming from Poland, Czechoslovakia, Ukraine, Russia, and even as far away as Japan! These soldiers were not motivated to fight, but were more interested in enjoying the beautiful Normandy climate, the local ladies (there was a brothel in Sainte-Mère-Eglise and Bayeux), the gastronomy etc.

In Paris Werhmacht headquarters, the continuous weakening of the fighting spirit was well known and understood, but how to deal with it?

Karl “Rudolf Gerd” von Rundstedt, Commander in Chief of the army, showed a certain fatigue and a certain resignation whilst “Johannes” Erwin “Eugen” Rommel, Commander of the Army Group B no longer believed victory to be possible!

Rommel, thanks to his past experience in North Africa, was very well aware of the inferiority of his resources and obsessed by the overwhelming superiority of the Allied air force. In the famous speech of Eisenhower on June 6th 1944 entitled “The Great Crusade” he stated “Our air offensive has seriously reduced their strength in the air and their capacity to wage war on the ground…” 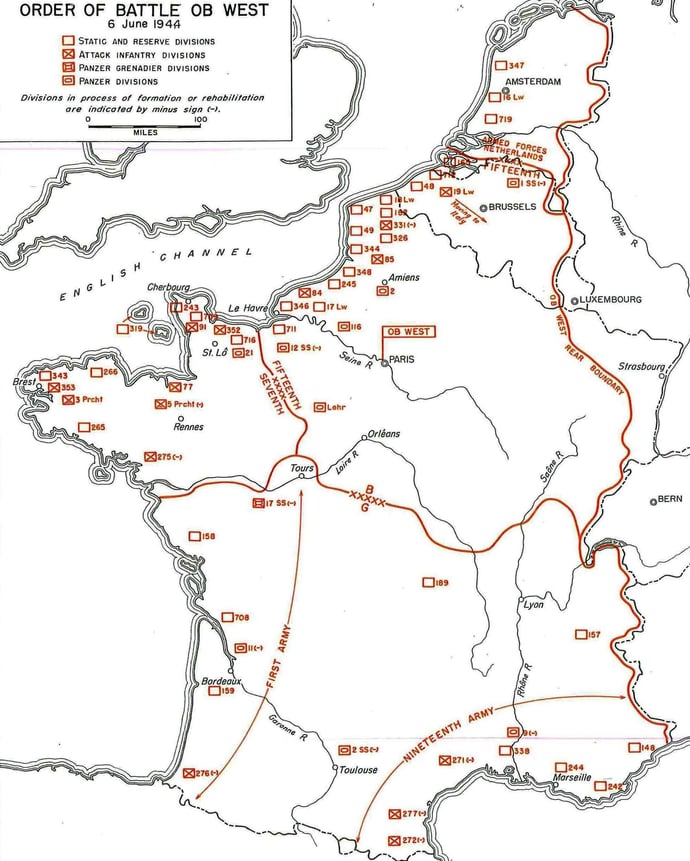 Rommel could only look on helplessly when he drove back from Germany after Dday at the dire situation of the troops under his command. His forces were incapable of responding with equal force as the coastal defensive system was taken down and the French railway network was bombed by the allies and/or destroyed by the French resistance!

Yes, with such limited resources, the Kriegsmarine (the navy of Nazi Germany from 1935 to 1945) and the Luftwaffe (aerial warfare branch of the German Wehrmacht during World War II) were unable to put up any serious resistance against the Allied Armada on and after Dday.

Like the Wehrmacht responsible for the Atlantic wall defenses, the German Kriegsmarine and Luftwaffe's weak forces were spread out in Normandy as the Nazis had no idea of the enemy intentions. Why? Because of two major deceptions: the first was called Operation Fortitude, a plan with a great actor to lead it in General Patton, and the second was thanks to Agent Arabel, a double agent who more than surely saved thousands of lives on Dday…but this will be explained in another blog of Normandy American Heroes… 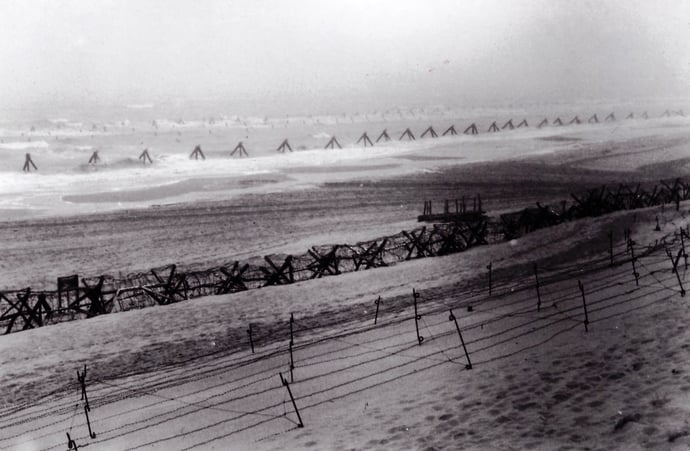 Despite their limited resources in Normandy, the Kriegsmarine responsible for intervening in the English Channel did have a few destroyers, torpedo boats, and Schnellboot (let’s not forget Operation Tiger!) based in  the Le Havre and Cherbourg harbors where the Germans had built impressive bunkers. However, they were limited in their actions thanks to everything the Allies had achieved in breaking up the Marine Enigma codes! Of course, in the small harbors of Ouistreham, Port-en-Bessin, Grancamp-Maisy, and Isigny-sur-Mer they had small vessels anchored but what could they do on Dday against 5000 or so battleships and destroyers?

As for the Luftwaffe, on the eve of Dday, they simply were not in a position to control the air space over the Western Theatre of Operations that was to take place nor capable of fighting up front against the landing forces.

Why? Day and night, British and American Air Force bombardments above Germany had given no choice to Hermann Wilhelm Göring other than to protect his homeland with the Luftwaffe under his command. As a result the Luftwaffe only had some 300 fighters and a small number of bombers in the area on D-Day, whereas the Allies had a total strength of 11,000 aircraft!

The collapse of the Luftwaffe has to be seen as an intense Allied effort to achieve aerial supremacy on the Western Front… luckily for the Allies, nobody was willing to listen to Field Marshall Erwin Rommel's concerns!

In the first five months of 1944, the 3rd Luftflotte (this Luftwaffe detachment was based in German-occupied sectors of Northern France, the Netherlands, Belgium, and Vichy France, to support the Axis power's forces in the area. Its command offices were still in Paris on the 26th of June 1944) lost on average 35 airplanes per day, i.e. over a thousand machines per month! At the same time, Allies were hunting down German aircraft from all airfields within a 150 mile radius of Carpiquet airport next to Caen.

Having lost a huge portion of its fighting potential, the Luftwaffe could no longer take any chances on the other side of the English Channel! Consequently, in the absence of valuable intelligence from aerial photographic reconnaissance (except for the planes not taken down in the south east of England – Operation Fortitude!), the German High Command remained totally unable to provide a clear answer to two vital questions: Where and When? 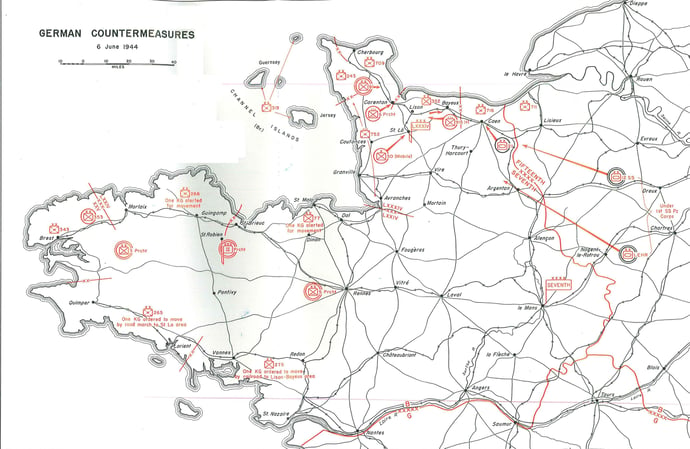 With neither an air force nor a navy force capable of withstanding the enemy, the defense of the Western Front rested largely on the army. Like Brittany, Normandy was occupied by the Seventh Army of General Friedrich Dollmann, who in turn took his orders from Erwin Rommel. This huge formation, with more or less 1,000 miles of coastline to defend, numbered approximately 15 divisions, about 200,000 men. At a rough estimate, between Barfleur (Peninsula of the Cotentin) and the mouth of the Orne (Sword beach), there were more or less 50,000 soldiers and several hundred bunkers along the coast and immediately to the rear: Crisbecq, Saint Martin de Varreville, and Azeville. 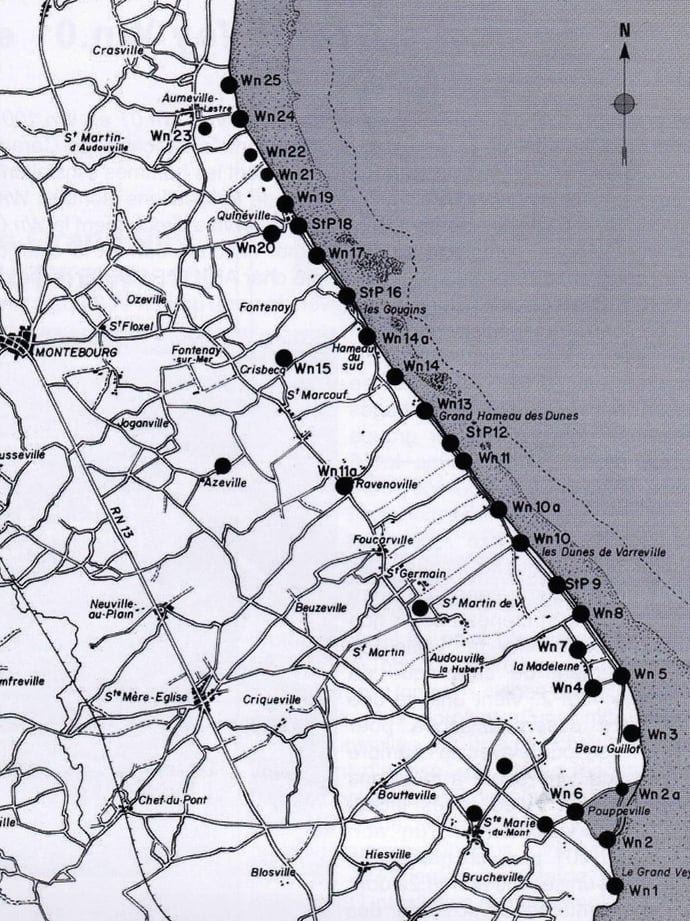 In addition to the poor quality of these troops, with the exception of the “Fallschirmjäger” and SS Divisions, and many material shortcomings (an odd assortment of weaponry both French and German, the lack of efficient mobility) the German soldiers in Normandy suffered from the ongoing argument between von Rundstedt and Rommel as to how to go about driving back the Allies invasion.

This deep disagreement had ended up with the armoured reserve, the striking force responsible for launching the decisive counterattack, being split up. Worse, thanks to Agent Arabel, what would have been a kill for the allies did not occur, the Panzer and Tiger divisions up north in Calais were rerouted by order of Hitler! With an air force and navy that was no match for their Allied counterparts as well as the breakdown and intoxication of the Abwehr intelligence service and in the absence of a common strategy, the struggle to counter efficiently the invasion ended up in a total failure. 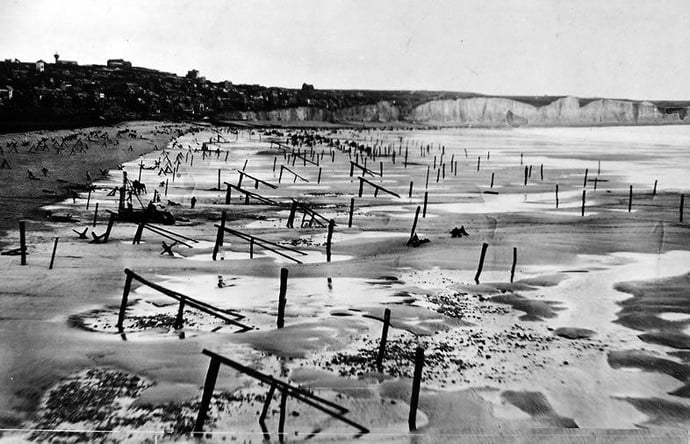 Learn more about our various tour packages in the region of Normandy here. Contact us to plan your tour today!