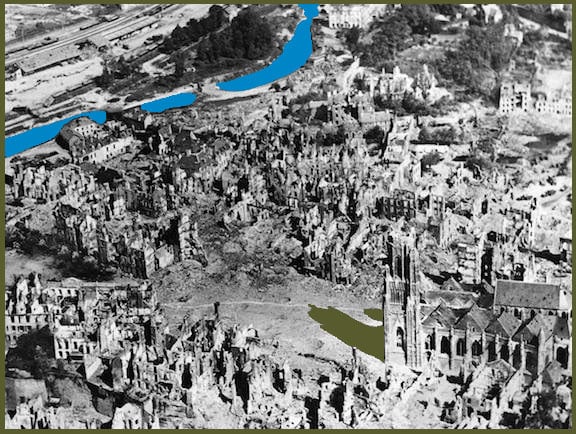 Also known as “The capital of ruins” (95% of the city was destroyed) the city of Saint Lô was a strategic crossroad for the Germans and the Americans. Whoever held Saint Lô, would controls Brittany....

The plan for the 29th Division was to attack Saint Lô with two forces. The main force was planned to attack from the northeast, by the road Saint-Lô – Bayeux (D-972), and some elements will attack by Martinville ridge at the West.

Just before launching their attack on the city of Saint Lô, the elements of the 29th Division strengthened their defensive positions. Many patrols were made along the frontline, the men met no serious enemy contacts during this time. Training was conducted, replacements, guns and materials were brought in on the frontline.

The 116th Infantry Regiment with some elements of the 175th attacked from the South at Saint-André-de-l'Épine (D-195) on the road Saint Lô – Bayeux.

By the end of the day, soldiers were near the hamlet of La Boulaye (D-972) and the 2nd Battalion of the 175th Infantry Regiment occupied the road junction in the vicinity of Le Calvaire (D-59).

During the night, the lines of the 1st Battalion of the 115th Infantry Regiment were broken due to a heavy intense German artillery shelling. Colonel Godwin Ordway Junior (Chief of Staff) tried to contact them but didn’t succeed: some Germans broke through between the lines of "A" Company.

It seemed to Colonel Godwin Ordway Junior that the purpose of the attack was the capture of some prisoners to learn what the plans for the tacking of Saint Lô was going to be.

The objective of the 115th Infantry Regiment was to seize the hamlet of La Luzerne (D-95) but the Colonel though it was necessary to take the hamlet of Belle Fontaine (D-95) first.

On the 12th of July, the three Infantry Regiments had limited success, due to a determined enemy resistance, they were not able to move further inland. The next day, the Division decided to resume its attack at 08:00 hours to seize the village of La Luzerne but its first attack was stopped. Finally at 15:00 hours, when the second attack was launched, the village of La Luzerne fell and was liberated.

On the 15th of July the attack begun at 05:15 hours, the tactic was to attack in column of Battalions.

All the attacks made by the 29th Division on this day were stopped by the Germans. During the night, the 2nd Battalion of 116th Infantry Regiment moved in the vicinity of the church Sainte-Croix de Saint-Lô, more precisely at the crossroad La Madeleine (D-900 / D-88) where they set up defences. The casualties were so high for this battalion that some planes were used to drop blood plasma! The rest of the Regiment held their positions.

On the 16th of July 1944 around a hundred German soldiers attacked the 1st and 3rd Battalions of the 116th Infantry Regiment at 11:10 hours and then at 21h50 hours but the attacks were beaten off. As the Germans didn’t succeed in penetrating the American lines, their artillery fired throughout the day.

The 115th and 175th Infantry Regiments beat off the German attacks during the day and no ground was gained nor lost. During the night, the 3rd Battalion of the 116th Infantry Regiment received some replacements but its strength of combat was only about 420 men.

The battalion attacked at 04:30 hours but the enemy fire was heavy. Major Thomas Dry Howie ordered his men not to fire back as he had been ordered to make contact with the 2nd Battalion as discreetly as possible. The hand to hand combat were difficult, bayonets, grenades were used and ended at 06:00 hours. After the attack Major Thomas Dry Howie sent out patrols to find the 2nd Battalion which, since the 16th, was pinned down and completely encircled! Why?  By mistake they had crossed the enemy lines and now the men were holding their positions in an orchard field near La Madeleine chapel under intense enemy artillery.

The Division continued its attack on the 17th of July with the three Battalions of the 115th Infantry Division attacking the German positions but as the previous days the attack was stopped due to the heavy German fire. This attack was ordered by General Charles Hunter Gerhardt; he wanted to attack the Germans frontally but it was a mistake. As the attack failed he took advice from the Executive Commander of the 2nd Battalion.

He suggested to envelop the German forces, then have the 2nd Battalion move to create an envelopment on the East of their positions, attack through Chemin Costil de Martinville and reach the ground 200 yards West of the village by sunset. The 3rd was ordered to attack the hamlet of Le Cauchais (D-88) but it was not essential. Nevertheless it enabled the men of 2nd Battalion to start their envelopment; the strength of the Germans was then divided.

Note: During the night, the S-3 received an order from the Division headquarters to launch an early morning attack to seize Saint Lô. But as Colonel Godwin Ordway Junior was already planning to attack the city, the S-3 didn’t wake up him. General Charles Hunter Gerhardt called around 05:30 hours of the morning and as Colonel Ordway had slept approximately only 1 1/2 hours or so he sounded off the general. The General told Colonel Ordway that he was relieved! Colonel Alfred V. Ednie took his place

Around 07:30 hours Colonel Philippe T. Dwyer phoned Major Thomas Dry Howie to tell him to go on the outskirts of Saint Lô from the East. The only things that Major Howie said was “Will do”.

The mission was to seize the objective of the 2nd Battalion which didn’t have the force left to do so. Not more than five minutes later, mortar fire was received on the Commandant Post of the 3rd Battalion of the 116th Infantry Regiment and Major Howie was killed by shrapnel in the back as he hadn't had the time to take cover.

It was from this moment that the first real advance was made; the 2nd Battalion continued its attack at 10:45 hours and gained the outskirts of Saint Lô around 14:00 hours. The Germans were very good fighters, and didn’t say their last words! Once the American soldiers arrived in the outskirts of the city the Germans counterattacked with armored cars. This counterattack was so heavy that the Americans requested an air support. The 116th Infantry Regiment was instructed to mark their emplacements to allow the pilots to determine the frontline and the strength of the enemy. The air support was a success, the German counterattack was stopped there and then.

The 1st Battalion of the 116th Infantry Regiment was ordered to occupied the astride of the Saint-Lô – Bayeux road, precisely at the North of the hamlet of La Roque (today rue de la Roque / rue du Général Koenig). The rest of the elements on the 29th Divisions didn’t advance further than their actual positions.

The American soldiers knew that the capture of Saint Lô was imminent. To enter in Saint Lô a Task Force was created, Task Force "C" (see our blog which details the AAR in taking Saint-Lô). Its mission was to seize the town and hold it. At 12:00 hours Task Force "C" moved to the town, and after several hours of hard fighting, Saint Lô was freed at 19:00 hours.

The city fell under American control but the Germans still didn’t give up. The Task Force was attached to the 115th Infantry Regiment and occupied the town. During the occupation, the Germans kept firing on the Americans with their Artillery and machine guns.

The action of the 3rd Battalion of Major Thomas Dry Howie of the 116th Infantry Regiment was regarded by General Norman Daniel Cota as the real taking of the city of Saint Lô.

Ordered by General Charles Hunter Gerhardt, the body of Major Howie was placed in an ambulance that joined Task Force "C" as it sped along the Isigny-sur-Mer – Saint-Lô road.

At the CP his body was removed from the ambulance and conveyed by jeep in the city destroyed by the bombs to the church Eglise Sainte-Croix de Saint-Lô. The body of Major Howie was wrapped in the American flag, with the insignia of the 29th Division. He was placed on a pile of rubble in front of the church and flowers taken from yards in the vicinity were strewn beside him. Major Howie, will be the first American soldier to enter in Saint Lô. 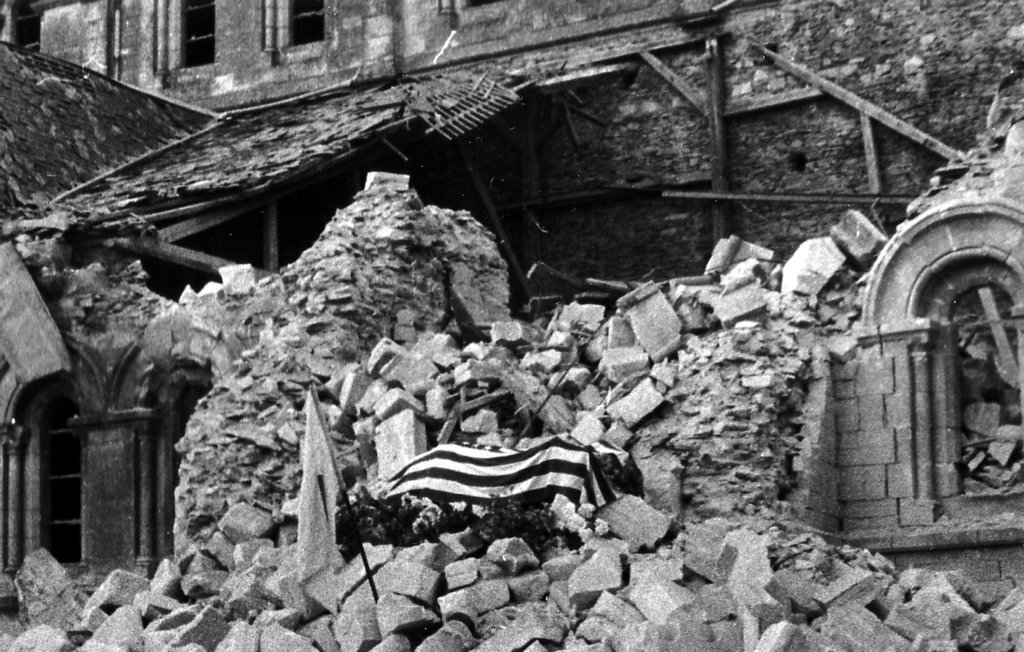 In remembrance of the battle of Saint Lô, the USS Midway (aircraft carrier) was baptized USS Saint Lô on October 10th, 1944.

On the 2nd of June 1948, the city of Saint Lô was honored of the “Legion d’Honneur” and of the “Croix de Guerre” from the French Government. To honor the Major of Saint-ô, a monument funded by the Virginia Military Cadets Academy was built in front of the church on the 18th of July 1948. Major Howie’s wife Elizabeth James Payne Howie, their daughter Sally and General Omar Bradley were present during the inauguration.

For the 25th Anniversary of the liberation of Saint Lô, the monument was moved to the roundabout "Place du Major Howie" near the center of the city (D-900 / D-6 / D-974).