One hour from Paris, in Val-d’Oise county set up the castle of La Roche-Guyon on the North bank of the Seine river. The castle we know has not always been the same, a primary castle was built in 911 after “Traité of Saint-Clair-sur-Epte signature ” which stipulated the site of La Roche was a strategic and perfect place to defend Ile-de-France country from Norman invaders.

A keep would be added, two hundred years later, overlooking the Seine and Epte valleys and destroyed on October 2nd 1793 during French Terror.

In 1460 Guy VII de La Roche passed away without a son, his daughter Marie inherited her father’s heritage which included the castle and all of the belongings. Fourteen years later she will marry Bertin de Silly. For the first time, for five centuries under Guy de La Roche coat of arms, the story between the castle and Guy de la Roche family ended.

Many famous French people stayed at La Roche-Guyon as Lamartine in 1819 where he wrote his “Poetic Meditation”, Victor Hugo came twice in 1821 then in 1835. Even Claude Monet, French painter drew the road leading to La Roche-Guyon in 1880. The castle has inspired French Artists.

Field Marshall Erwin Rommel set up his headquarters at La Roche-Guyon, precisely into the castle. It will be from there, he will visit the Normandy coastlines and prepare the plan to reinforce the defenses of the beaches. 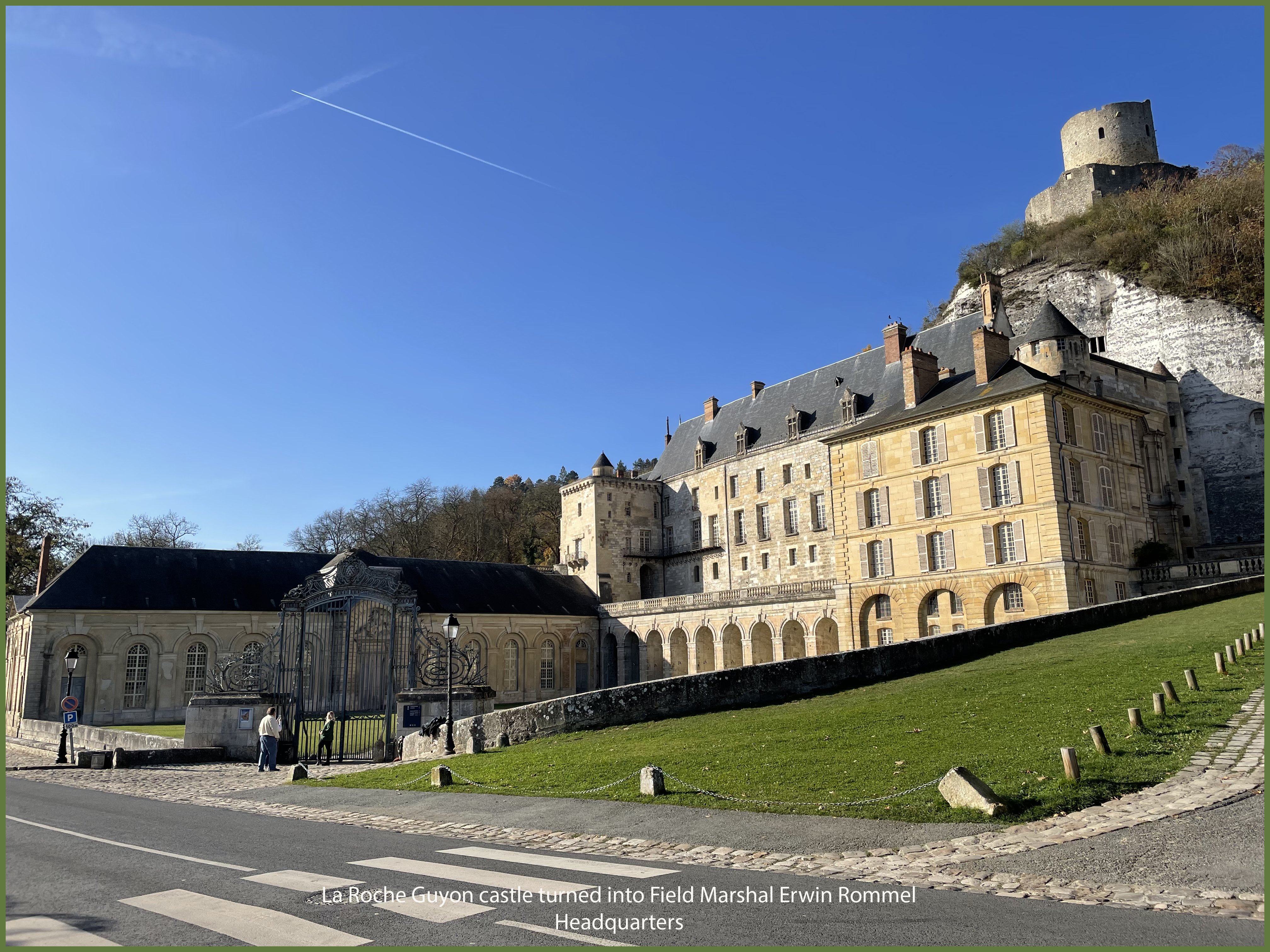 After the crossing of the Seine River by the 79th Infantry Regiment, Colonel Edwin M. Van Ribber, Executive Officer of the 313th Infantry Regiment was assigned the mission to create a Task Force on August 22nd by the Regimental Commander, consisting of “L” Company and a platoon from “A” Company of 719th Tank Battalion to investigate the village of La Roche-Guyon. According to the information gained by the troops, the castle was turned into Field Marshall Erwin Rommel and General Günther Von Kluge headquarters.

The location of the castle and of the village was outside of the Division’ s zone of action but the village is situated on a cliff overlooking the 79th ‘s bridgehead, excellent spot to be used as an Observation Point by the enemy.

313th Infantry Regiment’s officers were right, upon the arrival of the Task Force, tanks and foot troops found themselves under enemy mortar and machine gun fire. Colonel Van Ribber ordered his men to move up the road leading to the cliff using the cover provided by the tanks.

The road was so steep that tanks were losing their gasoline. It will take three hours for Van Ribber’s Task Force to arrive on the top of the cliff and to silence out the enemy opposition.

Upon the consolidation of the position on the cliff, some troops of the Task Force were sent to the castle to investigate. At their greatest surprise, there was no one, not a single human life even into the underground tunnels leading to the cliff.

It was the first time since June 14th, that men found a place with electric lights and a ventilation system still working, nevertheless no information or important documents were found. Germans had taken the time to carefully destroy everything.

After the investigation of the castle, Task Force continued on its way to the East, some men stayed at La Roche-Guyon to destroy the enemy ammunition dump.

Task Force moved to the East because while they were investigating the castle, interrogators learned that an enemy force of about 150 Germans had withdrawn into the woods but someone, probably an enemy soldier who got lost, succeeded to reach his band of brothers and warned them of the American arrival. This enemy force has taken all the necessary steps to withdraw much further into the woods.

Information gained throughout the day from prisoners were not negligible, it was learned that a German defensive battalion was moving toward La Roche-Guyon, with the purpose to shake 79th ‘s bridgehead.

During the next day, August 23rd, 1944, Germans reoccupied the cliff of La Roche-Guyon, taken the previous day by the Task Force. They could be seen walking along it.

The village of La Roche-Guyon and its area was never captured by the 79th Infantry Division, but the American artillery throughout the last days of the bridgehead across the Seine River prevented Germans to use it. It was only six days later, on August 29th, that the 2nd Armored Division moved through it.