Task Force Hogan: Escape through the Battle of the Bulge 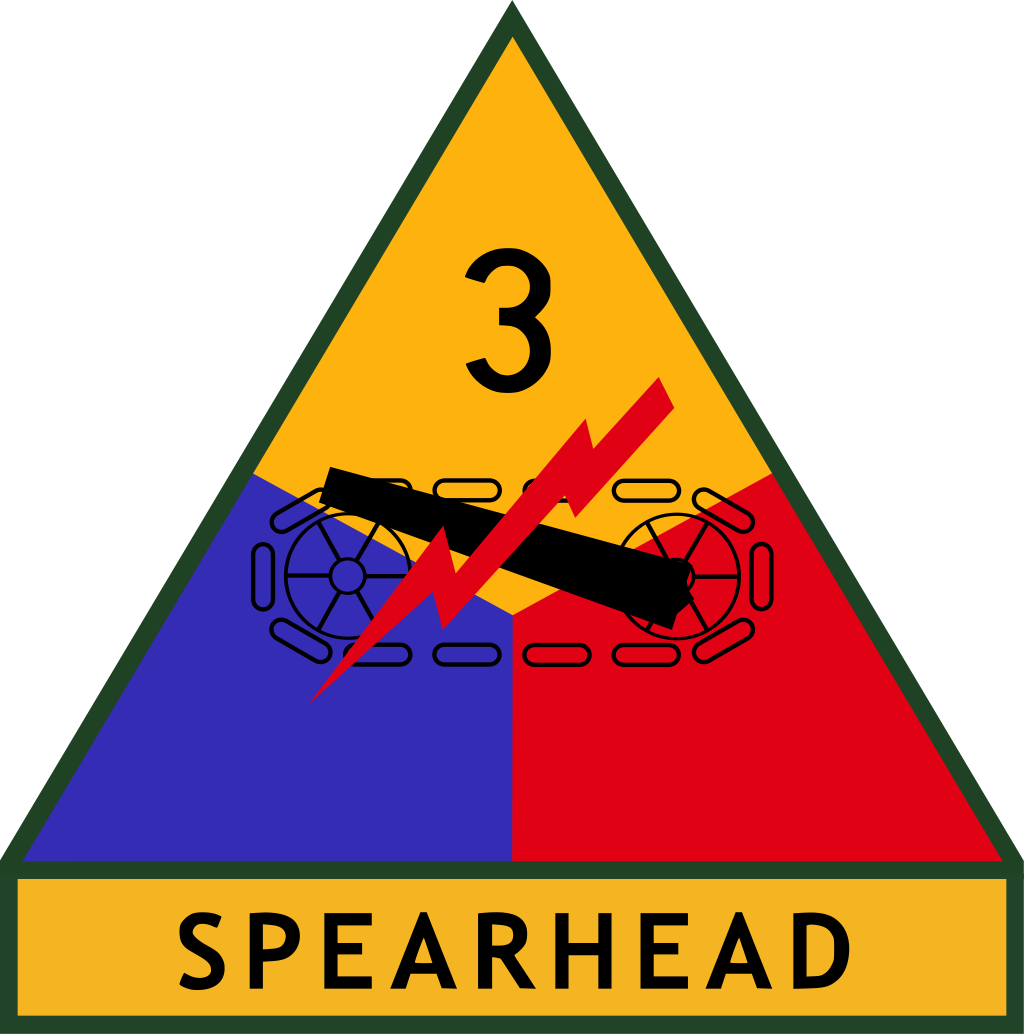 On December 16th, 1944, German army launched its counterattack also known as “Von Rundstedt counterattack” in the Bulge with the purpose to cut the American Army in Belgium by reaching the coastal town of Antwerpen.

At this time the American Army fighting in Europe was already in Germany, as the elements of the 3rd Armored Division known as the Spearhead Division with its attachments. While the German army was breaking through the American lines, on the 19th of December, a Task Force under the command of Lieutenant-Colonel Hogan was transferred from the town of Stolberg to an assembly area at coordinates 369879, in the vicinity of Hotton in Belgium to plug gaps.

© Photo from the website FindaGrave, added by Lemaire Serge.

Note: Elements which consisted Task Force Hogan were: Headquarters, 3rd Battalion of the 3rd Armored Regiment, “A” Company of the 83rd Reconnaissance Battalion, “C” Battery of the 54th Artillery and Reconnaissance Platoon.

At first, the time of departure was scheduled at 1030 hours on December 20th, but as Reconnaissance Company was running out of gasoline and arrived late during the previous night it was necessary to wait so they could be re-supplied. Finally at 1215 hours Task Force Hogan could begin its move toward Dinez.

Note: Reconnaissance Company’s tanks were not full of gasoline at 1215 hours but war doesn't wait. 1st Lieutenant Fite managed to find fifty to sixty cans of gasoline in La Roche-en-Ardennes and syphoned some from destroyed tanks.

“A” Company of the 83rd Reconnaissance Battalion which was the leading company of Task Force met an enemy roadblock in a sharp bend on the road at coordinates 486763, west of the village of Mâboge around 1600 hours. This roadblock stopped the column forcing the Task Force to hold its positions for the night, by setting up a commanding post in La Roche-en-Ardenne.

The next day, at 0800 hours Lieutenant-Colonel Hogan received orders by radio to report to Colonel Prentice E. Yeomans who was in Grandmènil. Immediately he left for Grandmènil accompanied by his orderly, Major Walker (AAR Spelling) Executive Officer, 1st Lieutenant Worrell (AAR Spelling), and two drivers.

On their way to Grandmènil, just south of the village of Beffe, at coordinates 424852 the little convoy spotted two American half-tracks and a jeep with about twenty men eating K-rations. Eighteen of them wore American uniforms, only two had German uniform. At first Hogan thought it was comrades guarding enemy prisoners but thanks to God he felt that something was wrong.

He ordered to stop the two jeeps twenty-five yards from the “assumed friendly soldiers”. Upon his doing so, the twenty men opened fire on them forcing Hogan and his men to jump out of their vehicles. Hogan with his orderly, Major Walker, 1st Lieutenant Worrell and  one driver found cover in the woods. Under enemy fire and due to the confusion, the driver of the second jeep ran down back the road and met a medic jeep in which he returned to Laroche-en-Ardenne where he reported Lieutenant-Colonel Hogan and the rest of the party as missing in action.

Upon reaching Beffe at coordinates 422852, Germans welcomed them with small arms, machine gun and bazooka fire. The enemy was able to flank the column from both sides, knocking one medium tank. The enemy fire was so terrific that the Task Force didn’t have the choice but to withdraw approximately one and half miles to the south setting up defensive positions at coordinates 434839.

Thanks to God, Hogan and his men were successful in reaching Beffe, but had no way of knowing what was going on. This is why they decided to stay hidden in the woods. At this time Major Walker and 1st Lieutenant Worrell became separated from the rest of the group because they went westward, letting the rest of the party alone.

Lieutenant-Colonel Hogan, his orderly and the jeep driver were alone in the middle of the Bulge woods with enemy soldiers dug in all around them. The enemy was so close to them that a German started digging in about eight yards from Hogan!

During the early hours of the 22nd of December, Lieutenant-Colonel Hogan decided it was necessary to go back to Marcouray. All together they worked their way through the woods and reached the village at 1000 hours.

There, Lieutenant-Colonel Hogan learned where were the main elements of his Task Force and ordered them to fall back inside the village so they could have excellent defensive positions. Marcouray became a fortress, roadblocks were set up on all roads leading out from the town, an observation point was set up in the church steeple, assault guns were set up all around the village while heavier guns were in an outside ring.

By 1200 hours, all defensive positions were manned and the Task Force fired during the rest of the day on the enemy coming from different positions.

Note: Germans attacked from the road running from Devan-Tâve and Le Concy and at the southwest from Warizy.

On the next day (December 23rd) after repulsing the enemy attacks during the night, at 0830 hours two German armored cars came in from Marcourt with twenty men each as protection. It was unavoidable, Germans wanted to take back Marcouray and wipe out of the map the Task Force.

To create roadblocks, the men of Lieutenant-Colonel Hogan used two tanks, which was a smart move. The tank turned into a roadblock at the north couldn’t turn its turret, however the Reconnaissance Platoon opened fire on the enemy, forcing one armored car to withdraw.

The second armored car came on into the village, advancing toward the other roadblock to the south and was welcomed by the gunner of the tank. Gunner kept in his sight the car and waited until it had gone past before firing. And when it reached the outskirts of Marcouray, the gunner fired two shells! Without any protection left, German infantrymen were killed by the soldiers protecting the south roadblock.

At noon, two enemy soldiers riding bicycles tried to enter the village, but the welcoming committee killed them.

Two hours later, at 1400 hours coming from the north, another German vehicle approached the American positions but this time, with no infantryman,  waving a white flag.

Learning this, Lieutenant-Colonel Hogan went by himself to the roadblock, and oh surprise two German Officers with an interpreter were waiting for him. The three enemies were blindfolded and led in circle through Marcouray to the Command Post.

One of the German Officer had with him a note, signed by the Division Adjutant stating that the Task Force was completely surrounded and it was hopeless to continue to fight calling upon them to surrender. If this was not believed, the German Officers had the permission to take one of  Hogan’s men to show him how desperate was the situation.

Upon hearing this Lieutenant-Colonel Hogan replied that his orders were to fight and he would not surrender. Refusing to surrender, Task Force let the three Germans go back to their lines.

Note: On their way back to their lines, the three Germans asked that the roadblocks be warned of them passing by.

In the late hours of the afternoon, supplies were dropped from aircrafts so that Task Force could be re-supplied. Lieutenant-Colonel Hogan saw two planes shot down by the enemy antiaircraft guns and at dark a Sergeant radioman from one of the destroyed planes came in Marcouray saying that two of his comrades escaped from the crash site but were lost in the woods.

Note: A second and last drop was made but was not very successful.

December 24th, 1944, second day in Marcouray! It was possible for the men of the Task Force to see the enemy digging all around Warizy. Germans knew that the men of Lieutenant-Colonel Hogan were surrounded, without supplies and running out of ammunition.

German’s attack strategy at this time was to send groups of infantrymen to harass the American positions and if possible, deliver the final blow. But Germans underestimated the tenacity of the Task Force which succeeded in repulsing and killing most of all groups.

At 1700 hours, coming from the Commanding Officer of the 3rd Armored Division, Major General Maurice Rose, orders were received. Orders stated that new supplies would be dropped but if the drops were to be unsuccessful, Task Force will need to destroy all of its vehicles and make its way out on foot.

At this time no decision was taken but in anticipation of leaving their positions if they had to, Lieutenant-Colonel Hogan sent “A” Company of the 83rd Reconnaissance Company to see if the route northwest running from Marcouray to Amonines was under friendly hands.

December 25th, 1944, Christmas Day! Lieutenant-Colonel Hogan was running out of time as Germans were getting closer and closer to Marcouray. He didn’t have the time to wait for the next drops and radioed that no supplies were needed to be dropped as he was planning to get out. Christmas Day was spent in planning the escape, and it was decided that the best road to leave Marcouray was the one at the north through the woods at the east of l’Ourthe River.

A small patrol was sent to Marcourt with the purpose to determine the strength of the enemy but no contact with him was made. At 1600 hours Lieutenant-Colonel Hogan ordered his men to destroy all vehicles but not to burn them as smoke would inform Germans that they were planning to escape. However, all vital and necessary parts were removed, destroyed or buried.

To escape, men had to take off their helmets, leave behind them their weapons, only take grenades, and black off their faces. It was also decided that the 12-14 wounded would attempt to leave during the early hours of December 26th with the medics, believing the Geneva Convention would enable them to get through. German prisoners were to be left behind and  released when medics would leave. 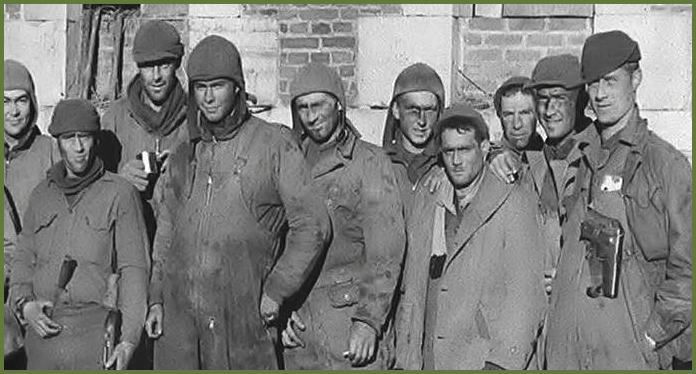 At 1755 hours, the Task Force was ready to move out but a coded and last message was received, letting know Hogan’s men the coordinates of the American Lines: "Line running from Hampteau (coordinates 386863) through Trînal (coordinates 416868) and Amonines (coordinates 448874)". 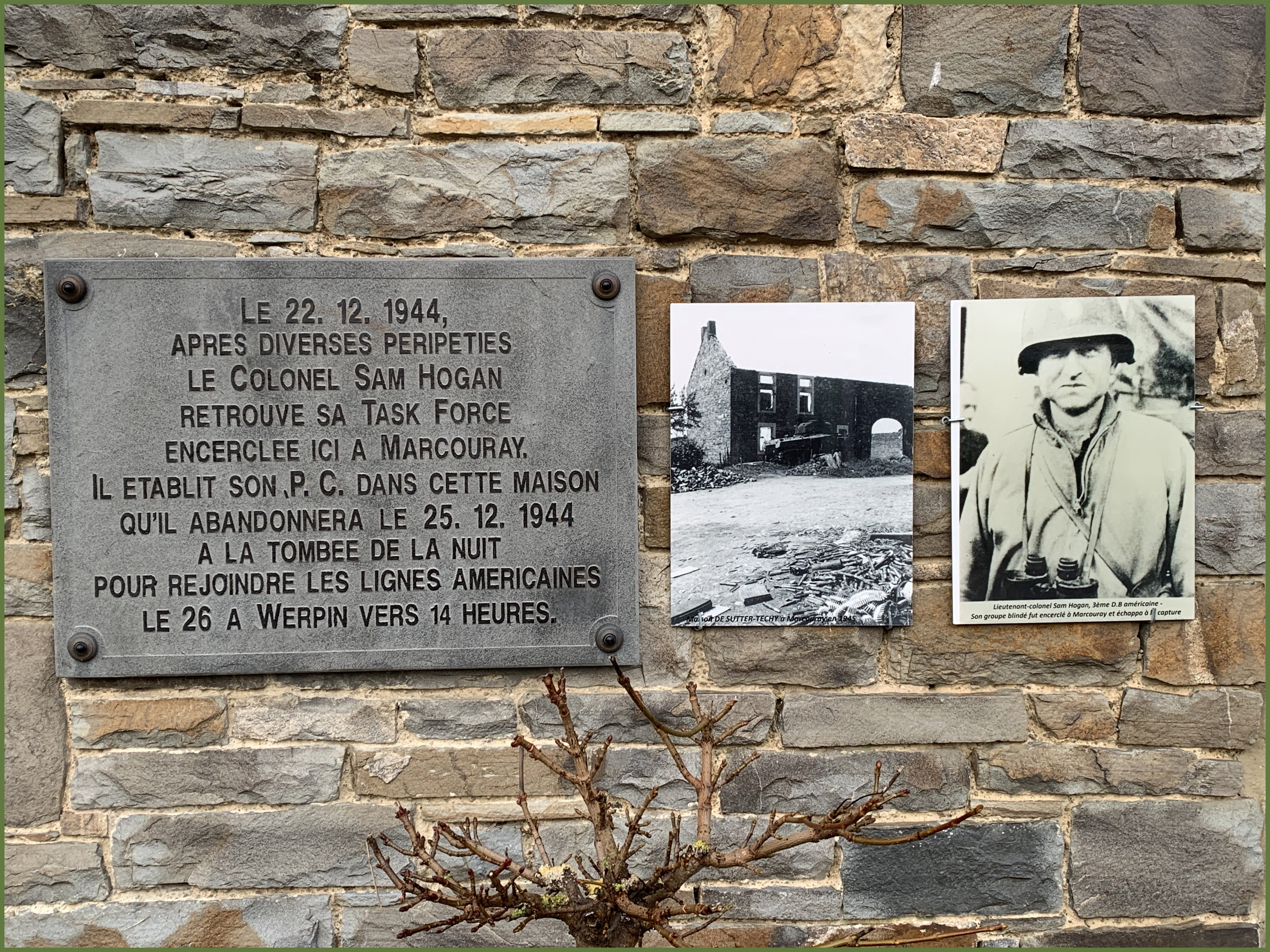 "On December 22nd, 1944, Lieutenant-Colonel Hogan, after some incidents, joined his Task Force, here in Marcouray. He established his  Command Post inside this house which he will leave, late afternoon on December 25th, 1944, to join the Americans lines the next day in Werpin around 1400 hours".

Five minutes after the message, the column started to leave its positions through the woods. Lieutenant-Colonel Hogan believed that the enemy moved in as the artillery barrage lifted. During all of the night from 1800 hours to the early hours of December 26th, 1944, men made their way through the woods. Thanks to God, only few enemy patrols were sighted, but as the column counted about 400 men they were not fired upon. Column passed so close to the artillery positions that it could hear the Officers giving orders!

All men found cover in the village of Soy in a farm along "Rue Saint-Roch". During its escape through the woods, Task Force Hogan encountered only one casualty, not because of enemy fire but one man was hit by a friendly fire while he was joining the American lines. 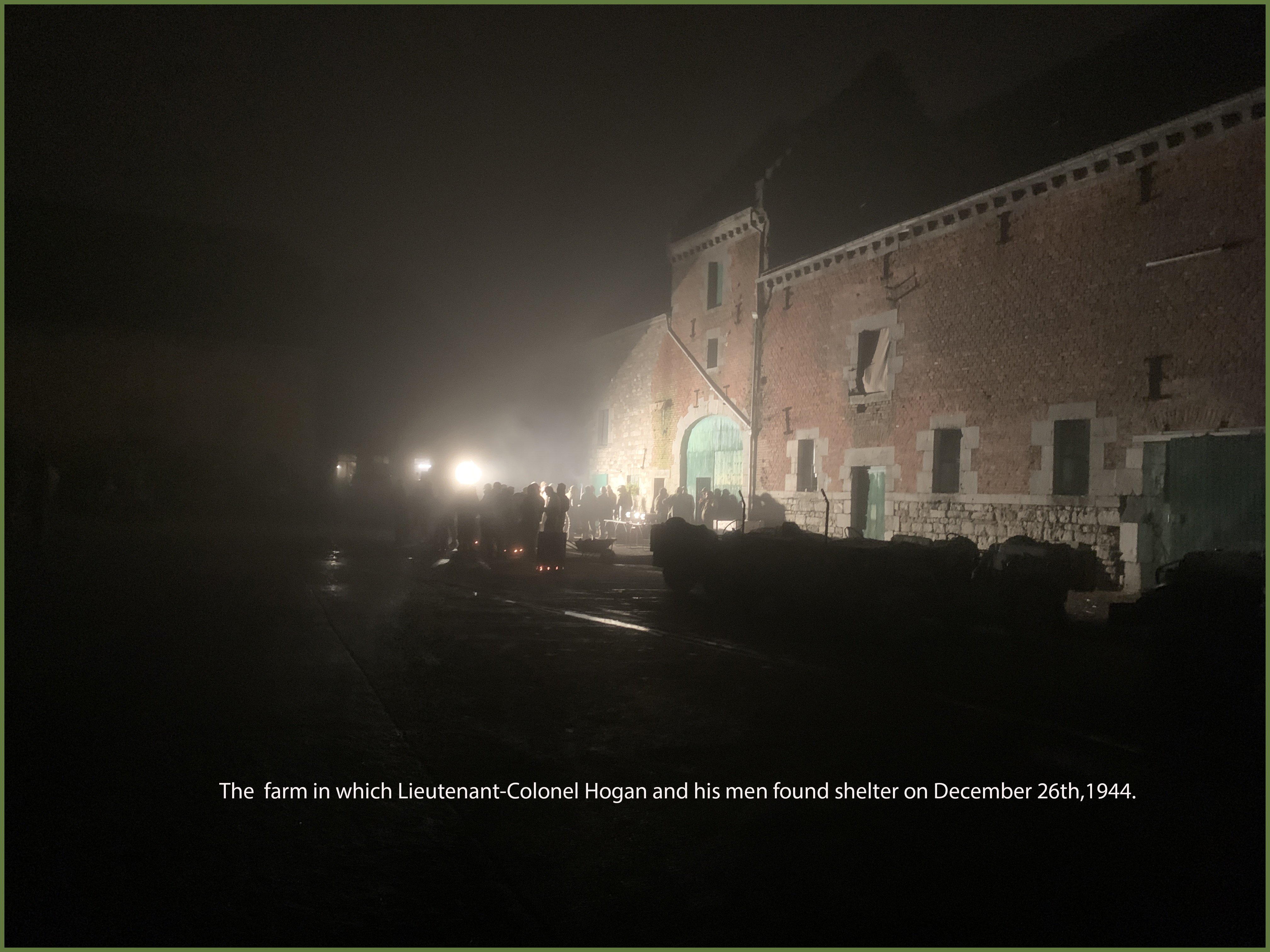