Letter from the past - Tribéhou in Normandy, PFC Anthony C. Ippolito

Once our missions to clear roads at Cherbourg were completed on the 27th and 28th of June 1944, we were sent back to Saint-Joseph and Fresville to rest after the heavy fightings to take control of "Fortress" Cherbourg. 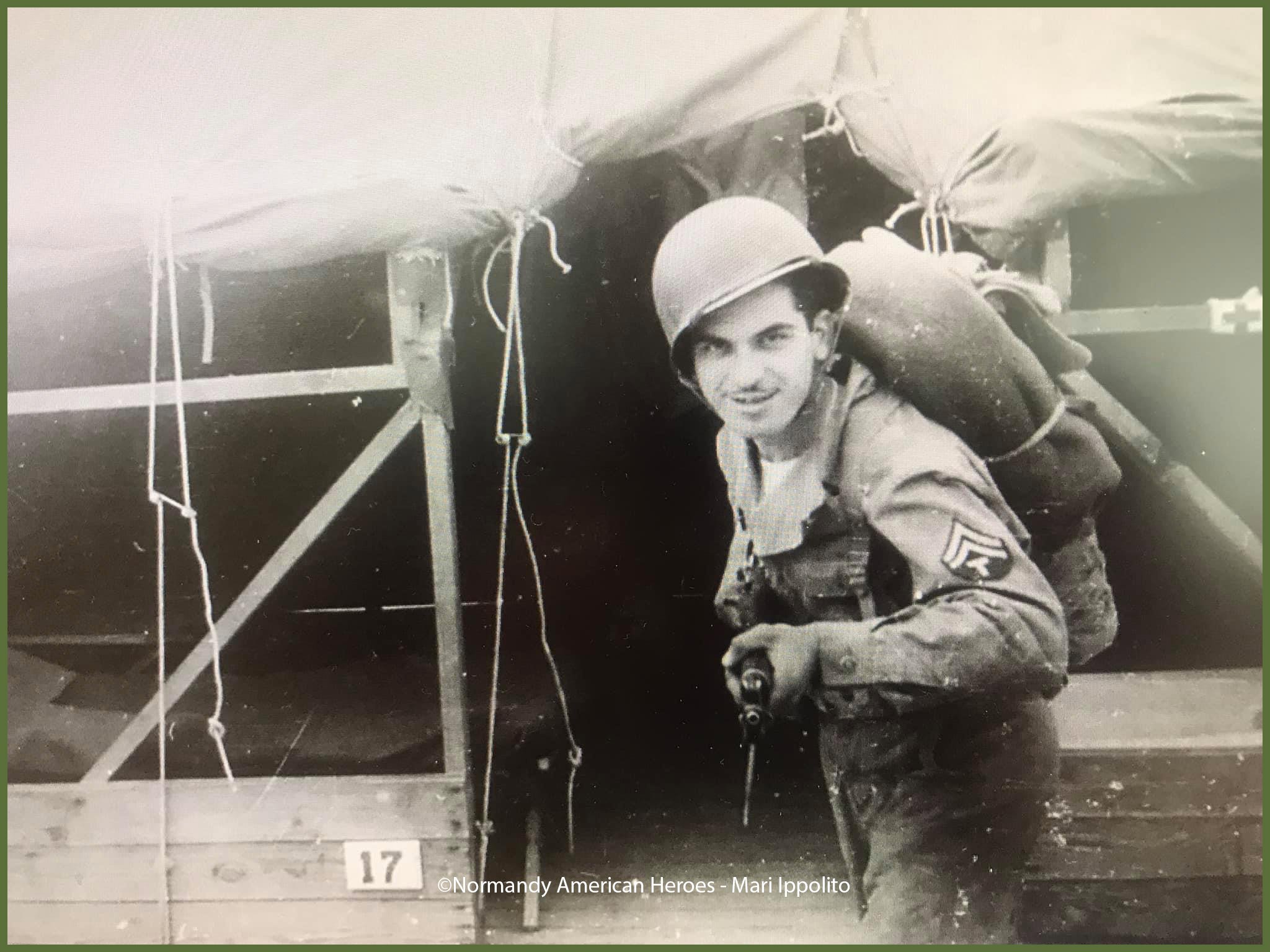 Me and the rest of the boys could finally take a shower, fix or replace our equipment. Our main job was to build bridges and to repair roads but also test and provide support if Infantry needed assault boats or pneumatic rafts.

Some of us were ordered to test some of each of those at Fresville using the town’s quarry. I don't need to tell you we took advantage of the situation to take baths.! 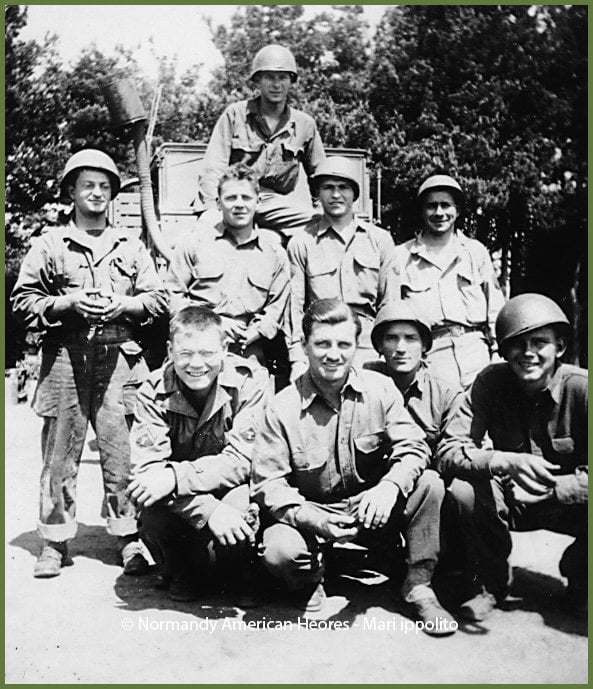 We were still in town when we got new orders to move further to the South of the Cotentin Peninsula.

Our Battalion was supporting the 83rd Infantry Division and we were transferred into the 1106th Engineer Battalion Group. We left Fresville for Houtteville then continued moving to a little hamlet called Le Port at coordinates 384761. It was in the middle of hedgerows and swamps.

We were not far away from the village of Tribéhou, approximately 1,80 miles when a “gas alarm” went off. Artillery being fired, hundreds and hundreds of shells falling with the smell of the dust created by the trucks made us believe the Germans were attacking us with gas. Luckily for us it was not the case.

Another “gas alarm” sounded when we moved to Le Glinel a couple of days later but we stayed quiet as we knew it had already happened. Something funny happened during the second gas alarm. We heard it from Headquarters’ boys. When the alert of a new gas attack was given, Technical 5 Frost (D-7 Operator) looked everywhere for his gas mask, he put it on, crawled back to the armored cab of his bulldozer and fell asleep. They found him the next morning with his mask still on!

Each company sent one Officer to Le Port, precisely at 0900 hours on the 17th of July 1944 to meet Lieutenant Richard G. Haenel to find a new assembly area.

Officers and Lieutenant Haenel found it at coordinates 395748, precisely at “Rue de l’Isle” in a field at Tribéhou.

The village was surrounded by swamps and the Taute River, so anyone who wanted to enter the village had to cross the bridge at the North, which was at coordinates 390753. 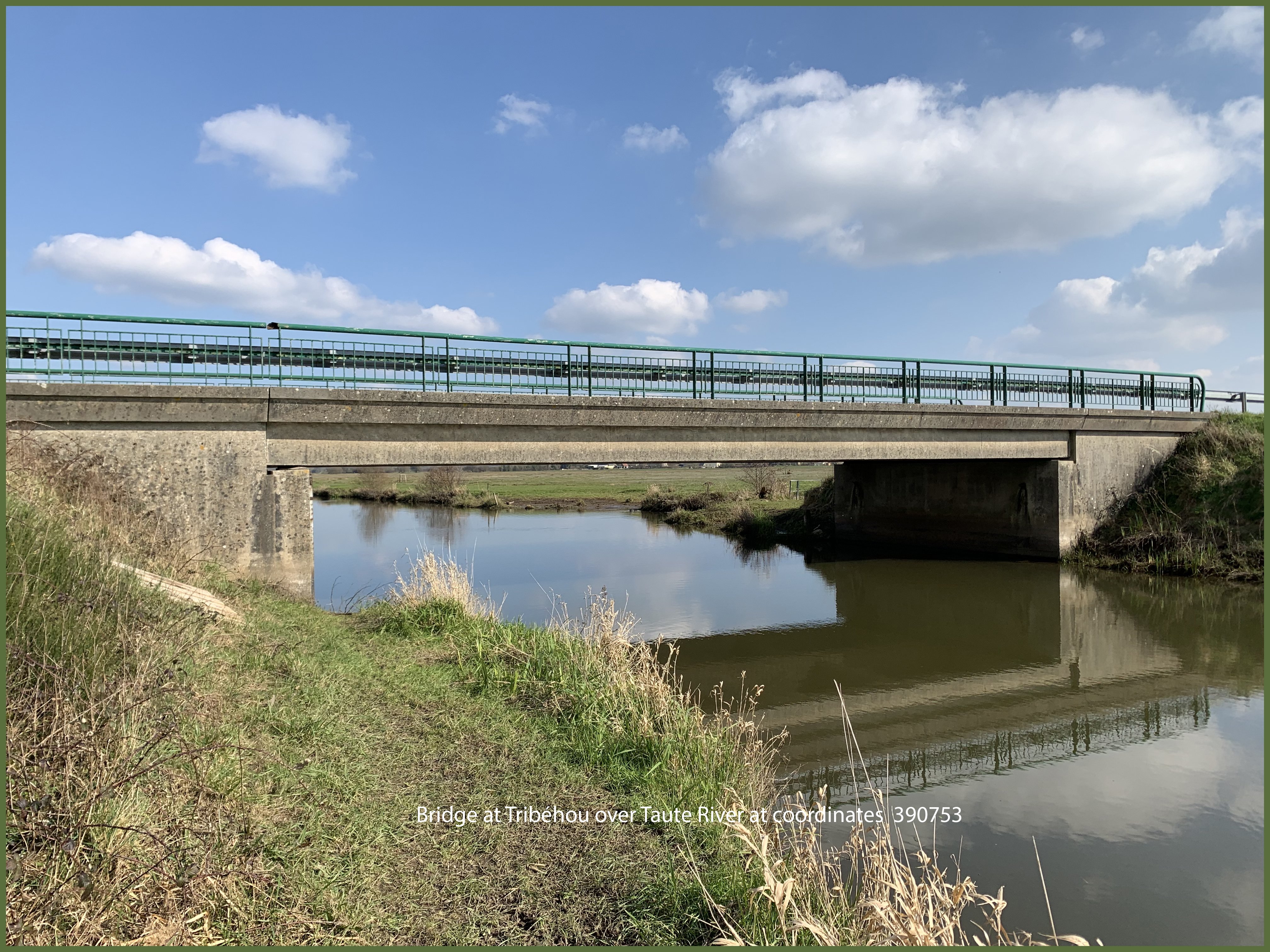 In the meantime, one Platoon from “C” Company was already in the outskirts of the village destroying the remains of the bridge and repairing the road. Once the work was done, they had to report to Lieutenant Latechaw (AAR Spelling) at 1030 hours.

Our move to our new assembly area was done by infiltration, not more than five vehicles at the time and camouflaged.

Germans were still in the vicinity and Tribéhou still under enemy observation. Companies moved as follows;

Around 1200 hours we were reassigned to the 1120th Engineer Group.

During the 18th of July 1944, we got back to our Engineer work, “A” Company was doing bulldozer work for the 980th Field Artillery Battalion at 0930 hours and “C” Company was sent to coordinates 377897 to pick up crushed rocks to dam the river, just on the West side of the bridge. 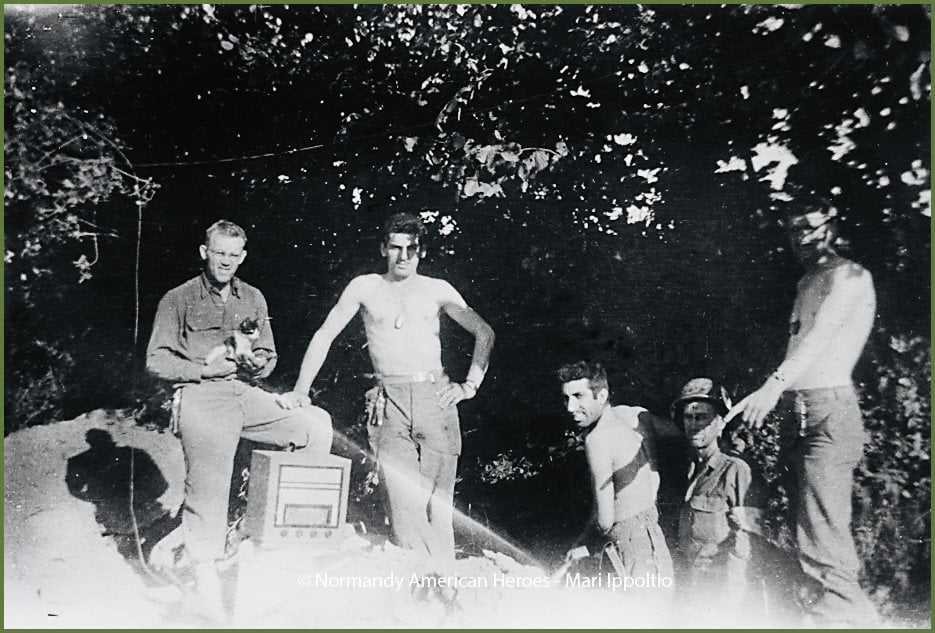 Officers were told at 1120 hours that a house at coordinates 390744, was full of tarpots and tar. During the rest of the day other boys were sweeping mines in the area West of the bridge.

Colonel Bareney (AAR spelling) called our CP to find out what was the situation at 0340 hours and summoned our Headquarters to send men to investigate.

Four Enlisted Men plus Captain Aldo Del Checcolo with Captain Taber Del Polo were sent to reconnoiter. All of them reached the first crossroad South of Tribéhou.

The enemy fire ceased at 0445 hours and MP’s thought it was 88mm guns set up further South.

At 0810 hours “A” Company was sweeping mines in a field at coordinates 445778 and at 0945 hours they were ordered to dig in gun emplacements for the 110th Antiaircraft Artillery Battalion at coordinates 423767.

The bridge linking both banks of the Taute River was under our guard until 1400 hours on July 20th 1944, when men of the 83rd Infantry Division took over. There were still civilians at Tribéhou who refused to leave their belongings despite the danger.

At 2045 hours three trucks of the Battalion were used to rescue some of them at Les Champs-de-Losque.

A little French boy who seemed to be 6 or 7 years old used to visit us and played several times inside our camp. The guys gave him chocolate bars and gums. It was definitely the first time he'd tasted those candies. 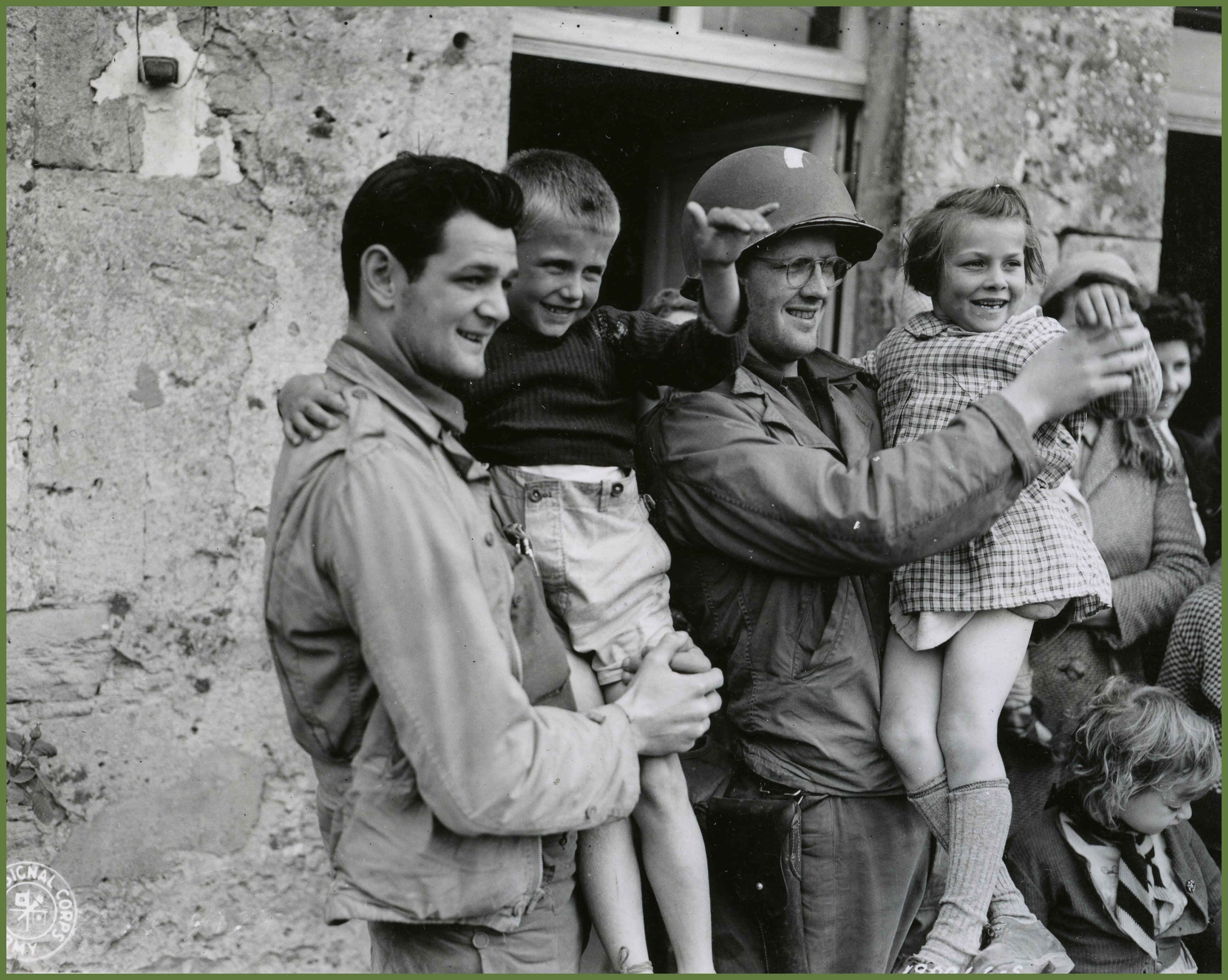 He was such a nice kid and kind of shy so we nicknamed him “Little Baby”.

Life under occupation is not something pleasant, war is not for children so while “C” Company was picking up rocks, they told him to climb into one of their trucks, and drove him around to distract him.

Cherbourg was already a month ago, and we were still fighting in the “hedgerows county”. We knew that something important was about to happen because we were in charge of trucks loaded with 7000 mines for the 1st Infantry Division.

Everyone was waiting for the H-hour but orders never came. This day was July 21st, 1944. No one in our Battalion will ever forget this day. Weather was stormy, around 1910 hours everyone was in his foxhole, either reading their letters, sleeping, or on guard.

Me? I was with three of my comrades. One of them was Private First-Class Joseph Gajewski. He is the big guy on the left. 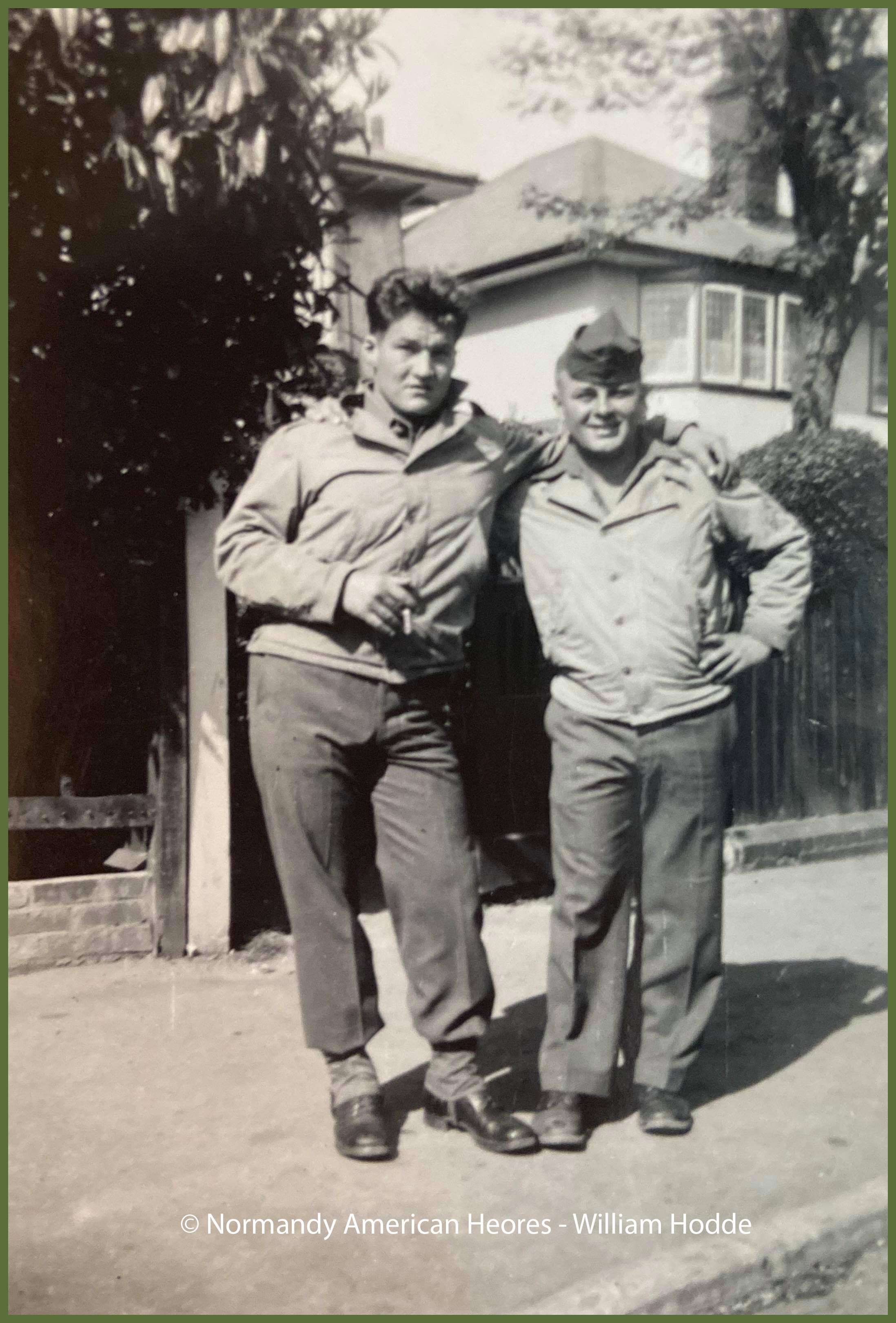 Suddenly German shells fell on us.  The first shells didn’t cause damage, just dust and air bursts. But more and more shells started to fall from the sky onto our positions.

Not far away from our positions was the 298th Engineer Battalion, which turned the farm of Marcelin Lechevallier into an ammunition dump of 11.000 pounds of TNT.

A shell fell on it and the building blew up in a split of a second creating a 50 foot crater.

As if the explosion of the TNT dump was not enough, some of the trucks loaded with mines, ammunition and explosives were parked just nearby! 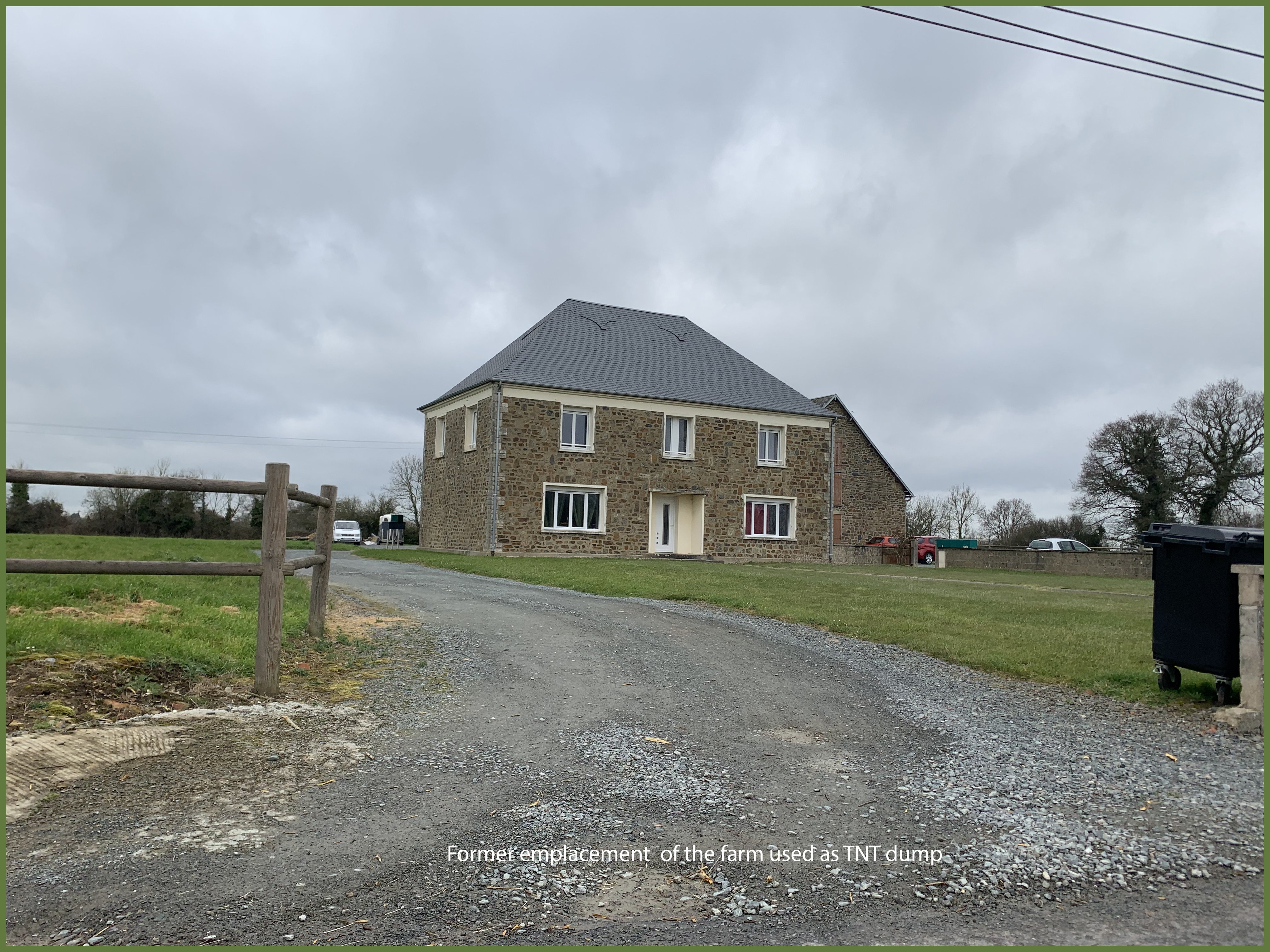 The Battalion didn’t lose a single truck but the men were afraid to approach it. Everything was on fire.

We learned a couple of days later that Officers in Carentan-les-Marais had heard the explosion!

The remaining inhabitants of Tribéhou were told by two American soldiers to leave saying in French “Partir” and you will be back by tomorrow “Vous revenir demain”.

As our assembly area was at “Rue de l’Isle” we saw them with their belongings walking toward Le Port on the road covered by the mud.

Around 2000 hours, we started to evacuate the area, the shelling was increasing but the order to completely evacuate was given at 2100 hours. We found shelter in a field near coordinates 423760 near Le Mesnil Angot.

Many of our boys were wounded that night. We had courageous medics whom were not afraid and ready to take the risk to save us.

1st Sergeant Miller (AAR Spelling) and Corporal Walter A. Grahl were awarded the Bronze Star for their bravery in evacuating “A” Company’s wounded.

Anthony Ippolito was born on January 29th , 1921, in Belleville, New Jersey to Lena Passannanti Ippolito and Gaeteno Ippolito. During the Great Depression he found a job thanks to Civilian Conservation Corps, which was created to help young men to find employment on environmental projects (Iowa).

Upon returning to New Jersey, Anthony worked at a local Engineering Company where he worked until the United States was drawn into the Second World War.

He was drafted on the 1st of March 1943 and joined the 297th Engineer Battalion one month later. Enlisted in H&S Company, he was then transferred to “A” and “C” Companies as a cook.

He survived the Tribéhou shelling thanks to Gasper A. Perricone who pulled him out of his foxhole.

Of the four men who were in the foxhole, he is the only survivor. Private Joseph P. Gajewski considered as the biggest and strongest man of the company was 19 years old and one of the best friends of Anthony, died due to a head wound. He was devastated when he watched his friend pass away. 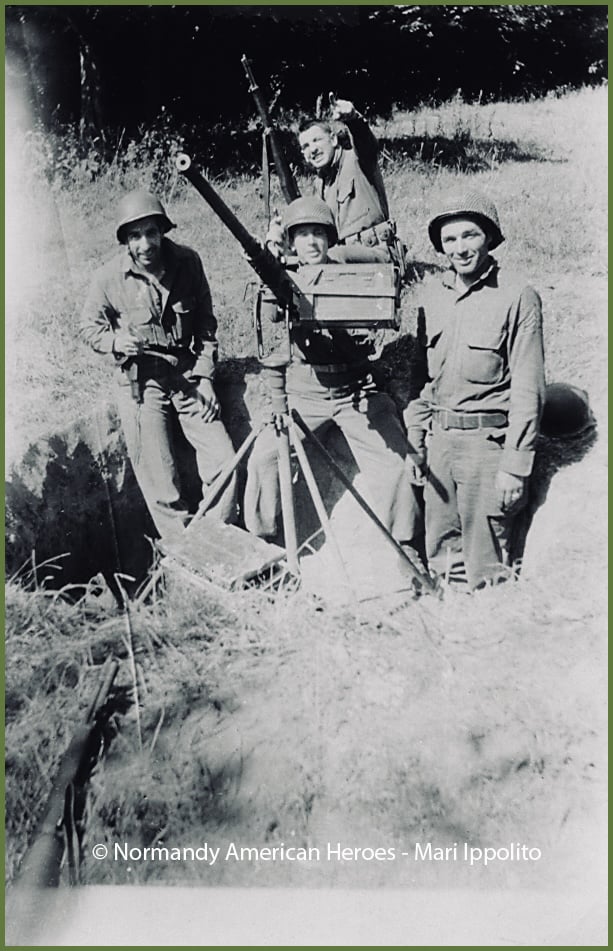 When the Second World War ended, Anthony resumed his work in electronics and opened Telefix TV Repair. Then he became a baker and pastry at Francis Cake Specialties and a Chef at Parillo’s. He also wrote music with his childhood friend, Vincent Riccio who later became his brother-in-law.

He married Marie Riccio who worked for the War Department in 1950. They had known each other since the 20's. 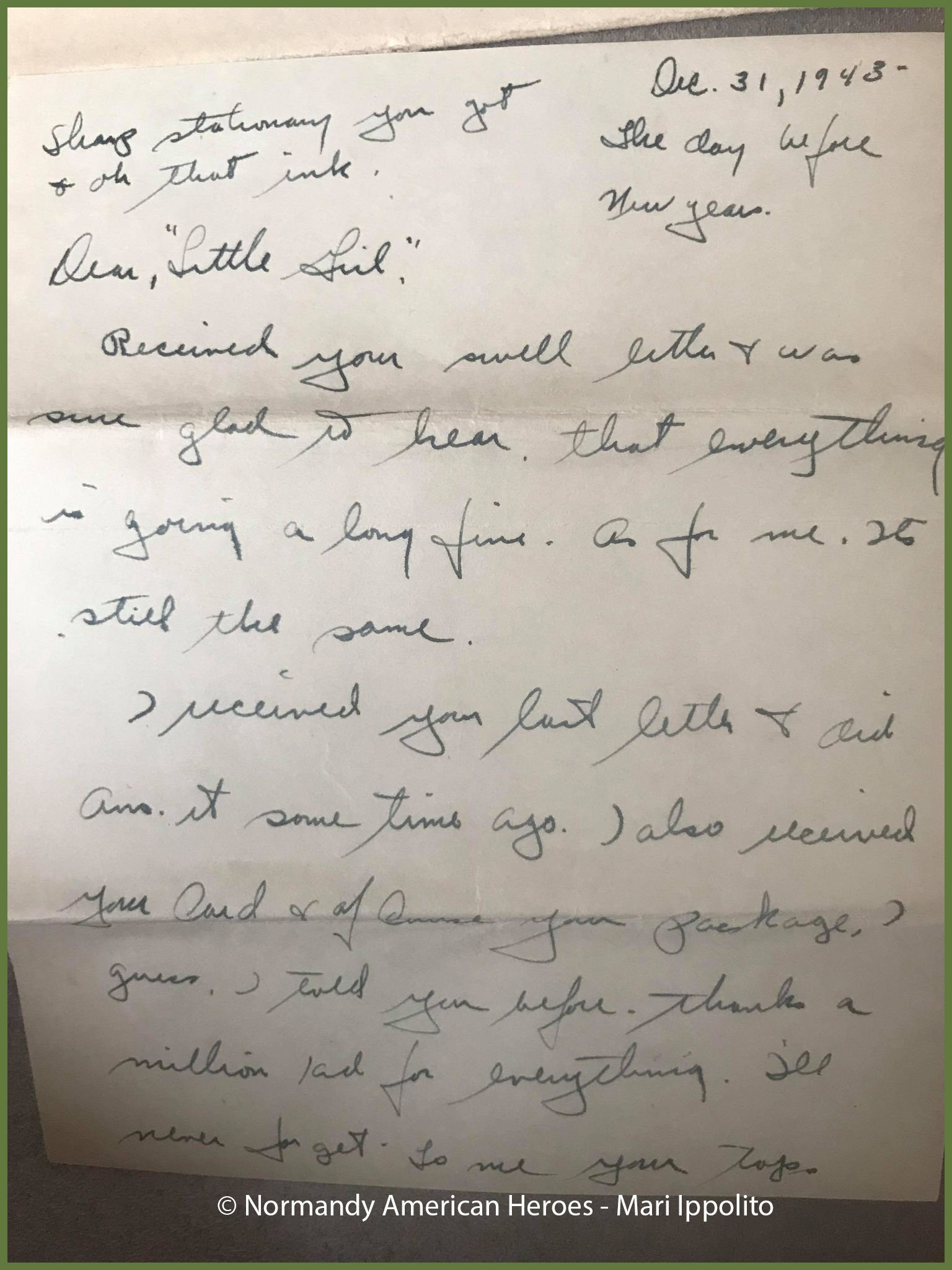 From this union was born on February 17th, 1963, their daughter Mari.

Anthony waited until his daughter became an adult to talk about what he experienced during the war.

He mentioned many times, Joseph. Mari searched Joseph’s family for many long years. Thanks to God, she was able to find his nephew Mr. William Hodde. Anthony passed away on Saturday, April 7th, 2018 at the age of 97. 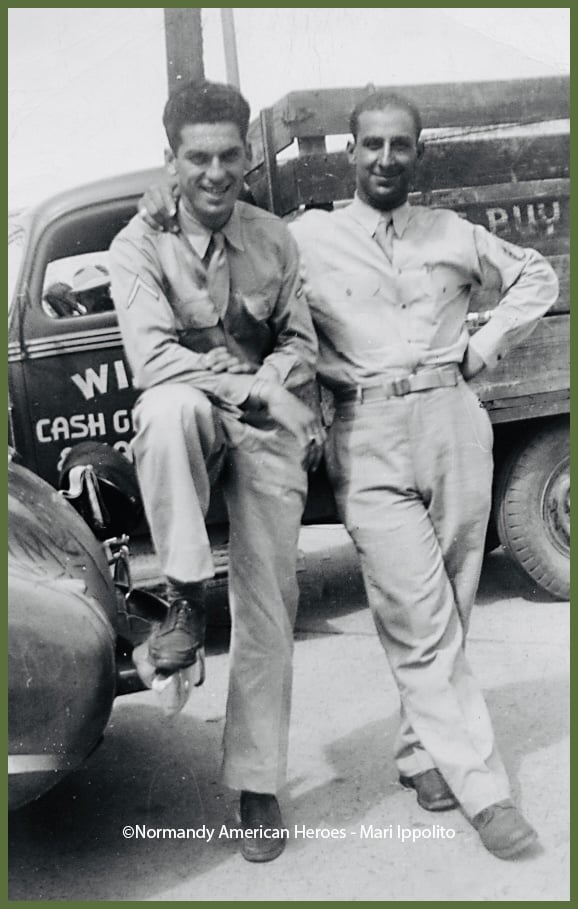 During the shelling at Tribéhou, the 297th Engineer Battalion suffered casualties:

Nowadays he still lives in Tribéhou, and happy to share with anyone this part of his life.