First warning signs of the Battle of the Bulge, the Hürtgen forest

At 0530 hours on December 16th, 1944 the final counterattack of the German army took place in the Ardennes forest.

750,000 men fought in the Battle of the Bulge which, with the battle of Mortain and the closing of the gap of Falaise / Chambois in Normandy, was decisive for the final outcome of WWII, the freedom of Europe.

It was the largest American operation of WWII and started when the First U.S. Army with its allies landed in Normandy on June 6th, 1944, D-Day.

The battle of Normandy lasted 100 days, Paris was then liberated on August 25th, 1944 followed by Brussels on September 3rd, 1944 and Luxembourg a week later.

Operation Wacht Am Rhein nevertheless was doomed to fail. 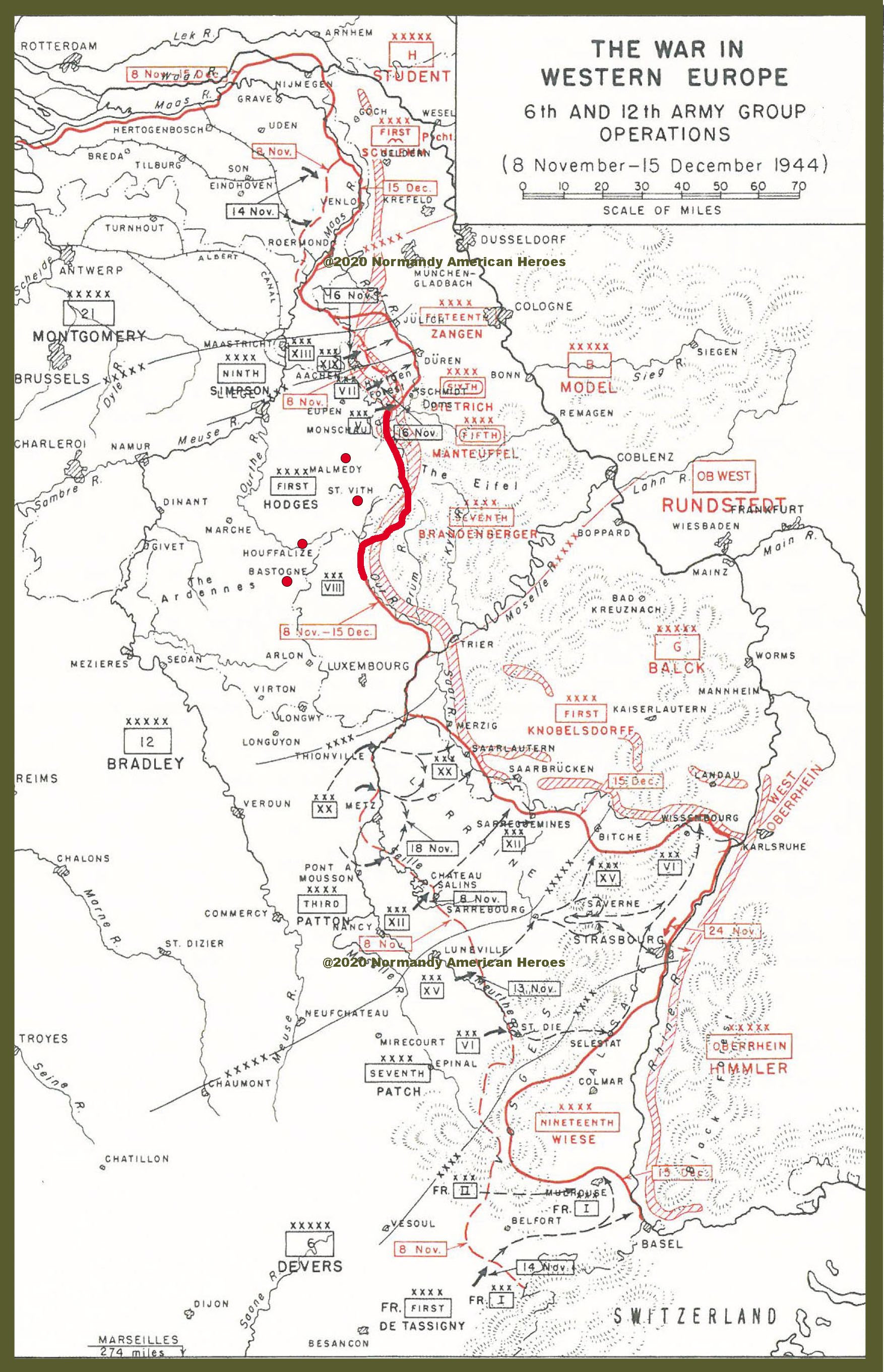 Why? The West Wall as the Germans called it (Siegfried line) was an empty nutshell, with no guns, machine guns, flamethrowers, mines, and men to defend it. Why? After the declaration of war against the United States, Hitler knew that he had to protect his west flank along the North Sea, English Channel and Atlantic. To do so, he had to build a second west wall, the famous Atlantic Wall! He therefore ordered the Siegfried Line to be stripped right to the metal doors!

More so, with no Luftwaffe to support the ground troops, not enough tanks, infantry and fuel the irrationality of Hitler to believe he was going to succeed was at its utmost delirium!

But let’s go back a few months

After the liberation of Paris, the British / Canadian troops were moving North West along the coastline to liberate Belgium and the Netherlands while the American troops were heading toward the Siegfried Line with the objective to pierce thru it right into the heart of Germany.

The German troops, since D-Day in Normandy and the breakthrough of the Atlantic Wall by the allies, had been actively working on reinforcing, rearming the Siegfried Line which Hitler had ordered stripped off everything in 1942!

The problem was that a lot of what they needed was on the Atlantic coastline…no longer available, one of the impactful mistakes of Hitler. 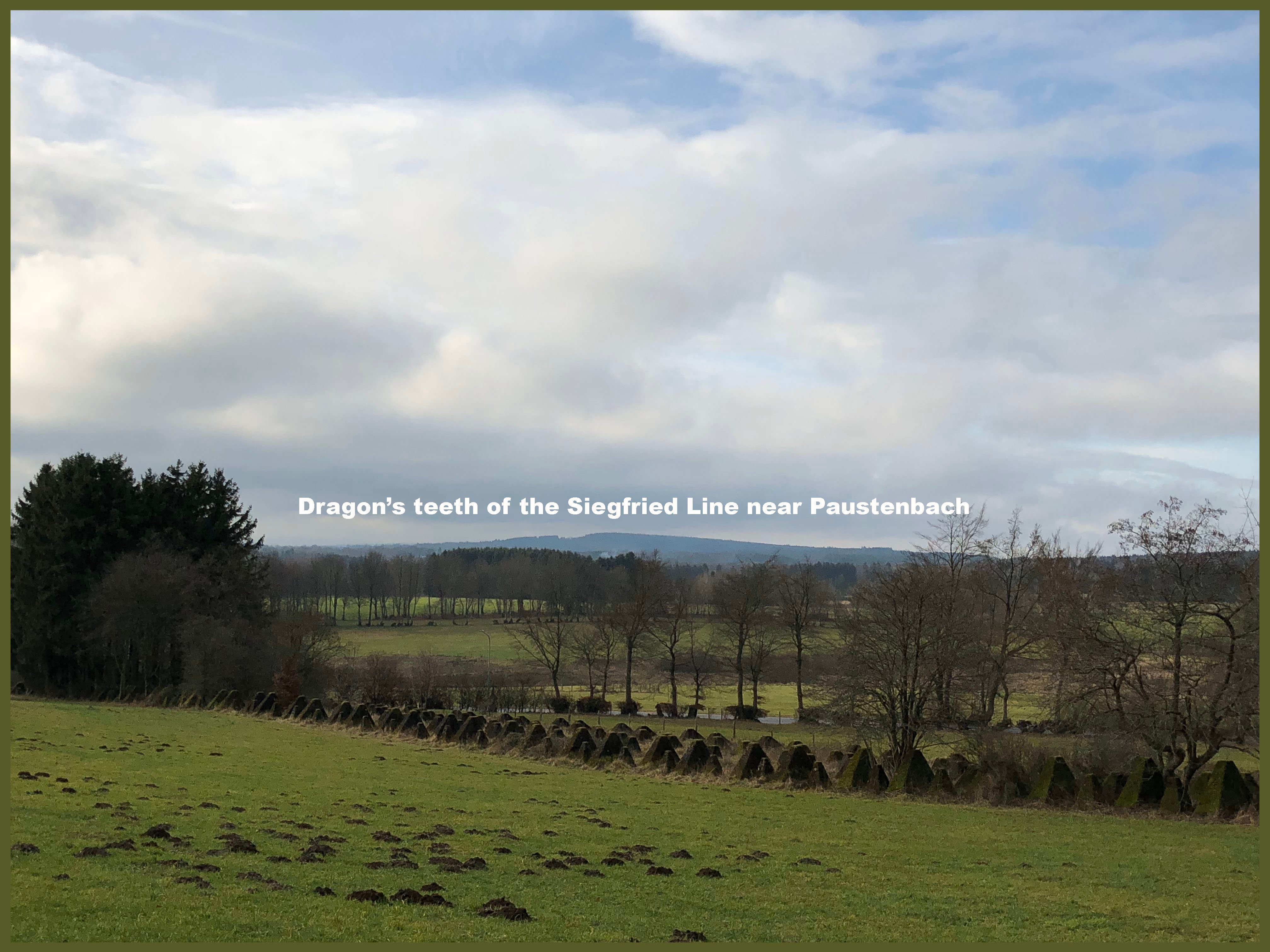 In 1938, the Siegfried line (West Wall for the Third Reich) with 12,000 bunkers, 640 km of anti-tank walls, mines, trenches, dragon’s teeth, forts and underground fortress was a formidable line of defense, of frightening effectiveness that surely motivated both France and England not to declare war against the Third Reich when they invaded Czechoslovakia.

It had been built in record time to protect the Western border of the Third Reich so that Hitler could invade with ease Austria, Poland, Denmark etc.… 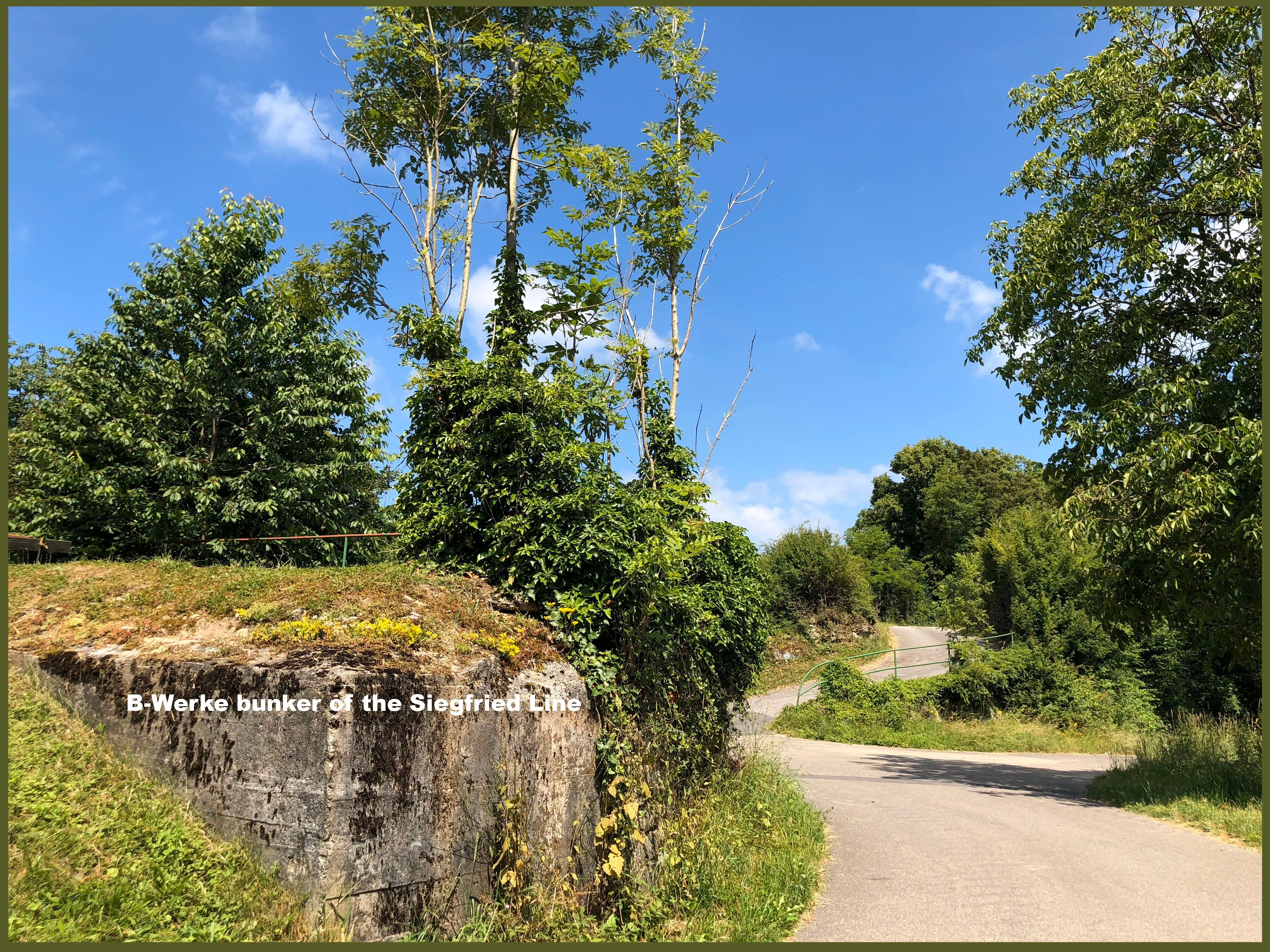 Field Marshal Model was a ruthless leader, not at all appreciated by his officers but loved by his men who gave him a surname: The Frontline Pig (Frontschwein) because he often visited his men on the front and took the same risks as them fighting the enemy.

His aggressivity and his lack of finesse especially pleased Hitler who told him he fought like a lion but was himself glad no to serve under his order! After what he had accomplished on the Polish front, Hitler had decided to give Field Marshal Model a new mission, take command of Army Group B and unofficially save the Third Reich!

The Army Group B on the Western front of Field Marshal Model was the defensive effort to be put in place on the Siegfried Line. 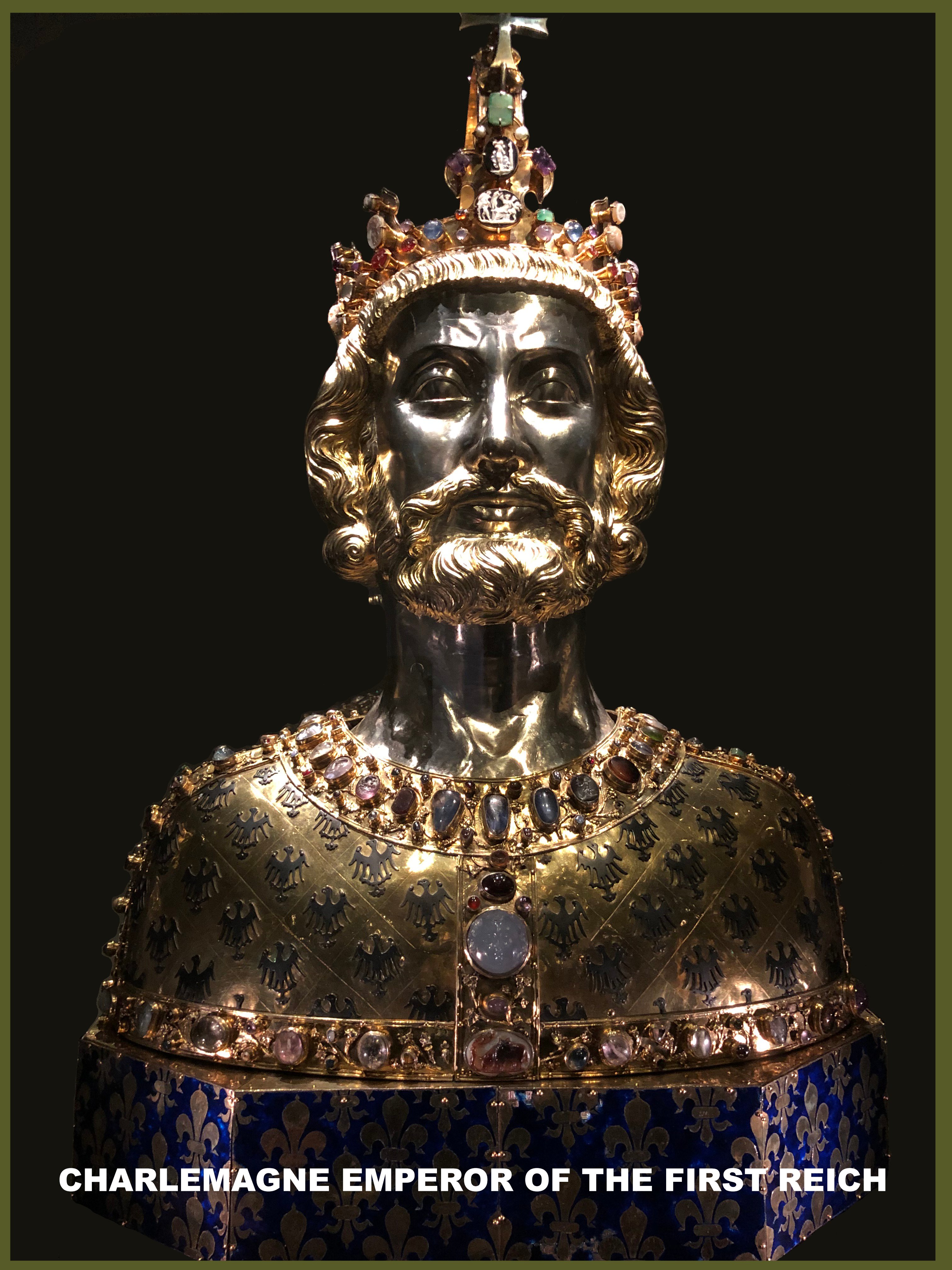 Field Marshall Model believed the Americans would more than surely lead an attack thru the Aachen gap (Aix la Chapelle – 1st Reich of Charlemagne). This gap was a narrow corridor between Aachen and the dense forest of Hürtgen.

Historically, many invaders had already taken this corridor to invade the valley of the Ruhr, the core of Germany industries, rich in charcoal, steel and iron.

The Ruhr valley was a crucial tactical position that was not to fall in the hands of the enemy!

The Nazis had to preserve the industries of the Ruhr valley if they wanted to continue the war effort. If the Americans took control of it, that meant more than likely the end of the war.

When Field Marshal Model arrived in the region, he was pleased with what he saw. The bunkers, and other lines of defense of the Siegfried Line and the density of the Hürtgen forest were going to be major obstacles for the Americans. He ordered the reinforcement of the Type 10 bunkers more strongly constructed than the earlier border fortifications. The soldiers also dug trenches for the forthcoming assault of the American troops. 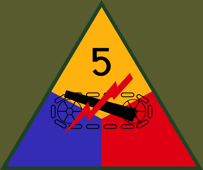 While Army Group B was working intensively on reinforcing the Siegfried Line and setting up lines of defense in Aachen, on September 11th, 1944, an American patrol under the command of Lieutenant Vipond of Troop B, 85th Reconnaissance Squadron of the 5th Armored Division entered German territory!

Even though they had learned little, they earned their place in history for being the first Americans to cross the enemy lines!

News of the Allies “brief” invasion on September 11th, 1944 of the Third Reich of Germany spread out in the world but, like often in today’s headlines, it will prove shorty that it was premature to celebrate victory!

People were rejoicing, celebrating the end of the war soon to be. How wrong could they be: “Don't sell the bear's skin before you have caught the bear"!

To say the least, defending your homeland is not the same as defending a country you invaded! The Germans were far from being defeated.

For almost three months, from September 19th to December 16th, 1944, American Infantry Divisions (even the 2nd Rangers Battalion who had taken La Pointe du Hoc) one after the other fought in the Hürtgen Forest where tragically two Infantry Regiments will be annihilated.

Field Marshal Otto Moritz Walter Model, the firemen of Hitler specialist of desperate situations, was ordered to defend the Ruhr valley and he did!

The Hürtgen Forest was ideal to achieve this. They were machine guns nests, trenches, bunkers and pine trees so close together that the enemy could not use their air force nor armored vehicles there.

It will become one of the bloodiest battlefields, where on both sides at least 30,000 were KIA, MIA or WIA.

Recently remains of an American soldier whose name was on the Missing Wall of Henri Chapelle American Cemetery was found in the Hürtgen Forest! He now has a bronze rosette next to his name.

Five years after the accomplishment of the Siegfried Line, the West Wall of Hitler was finally going to get its baptism of fire on October 2nd, 1944. 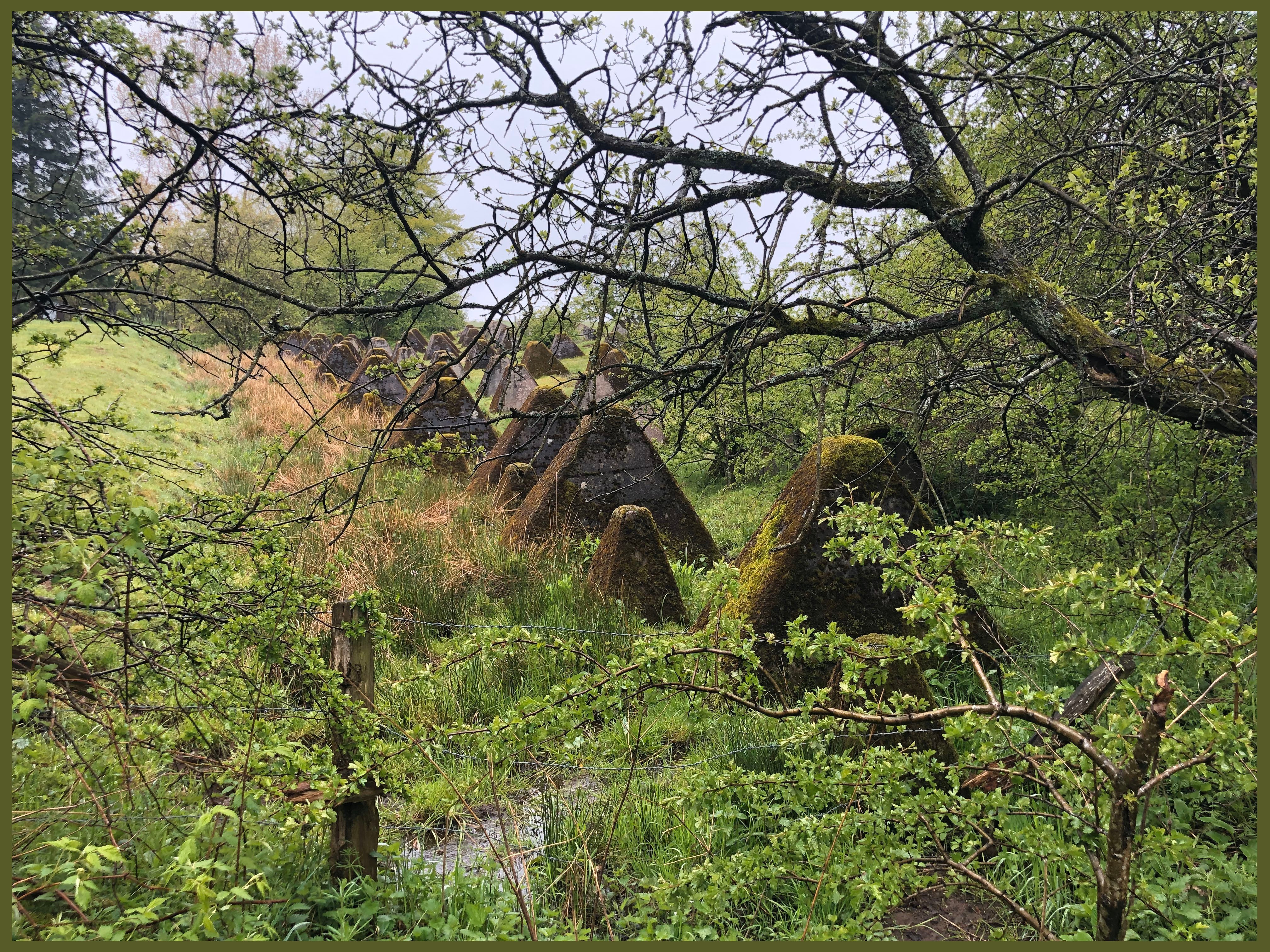 American troops launched their attack at the north of Aachen on October 2nd, 1944 thinking that the enemy was weakened and demoralized! Why so? They know they have air superiority, ground superiority, more men and ten times more tanks, so rightly so they believe they will defeat the Germans easily. Somewhat they are correct as the only thing the Germans have to defend themselves with, other than their patriotism was the Siegfried Line!

Nevertheless, and very quickly during the battle of Aachen, it became clear that Aachen had an important nest of resistance which gave no choice to the American troops but to take down the town.

The American strategy was to lead two attacks on the Siegfried Line both at the North and South of Aachen. Once totally surrounded they would be able to reduce to ruins the town with shell fire. Aachen once taken would become the first large town in Germany to fall.

But the Nazis and German troops had carefully deployed / reinforced their defenses around this strategic town with Dragon’s teeth, fortified bunkers, and imposing anti-tank obstacles setup at tactical places rendering the taking of that specific position by tanks virtually impossible!

After three weeks of intense combat, the Americans finally succeeded in piercing thru the anti-tank obstacles and were close to totally encircling Aachen. 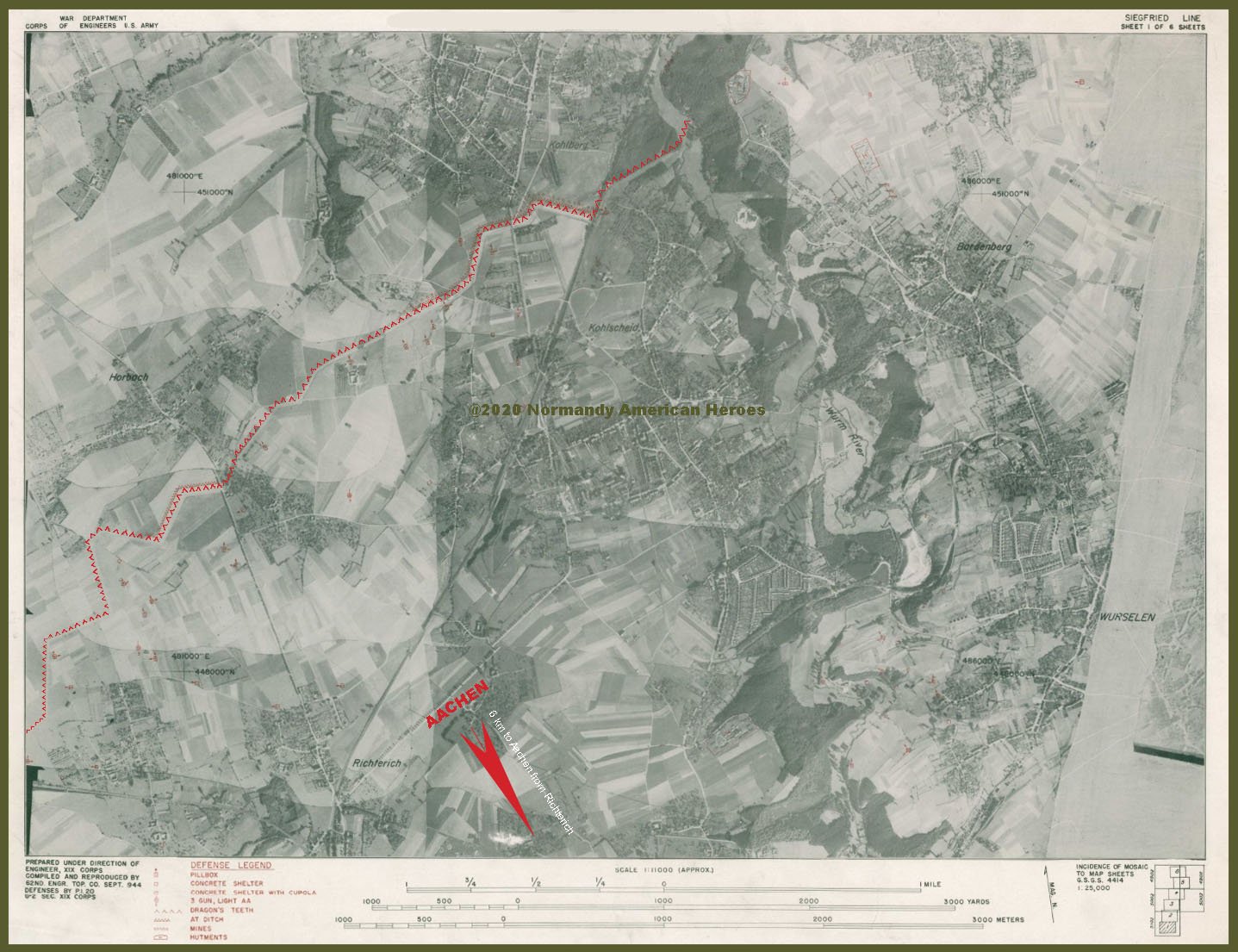 To say the least, Field Marshal Model had to act quickly to save the town telling his men to fight to the last and if need be, die in the ruins!

He decided to send as reinforcements the 116th Panzer Windhund (Greyhound) Division and the 3rd Motorized Infantry Division to Aachen but his tactical expertise could simply do nothing against the immense firing power of the Americans!

To make matters worse for Field Marshal Model, he didn’t have enough tanks to repulse the American attack. He basically couldn’t do nothing.

On October 11th, 1944, Aachen troops and civilians finds themselves in hell! The firepower of the Americans was massive. In just an hour the artillery fired 5,000 shells on the town, and the Air Force dropped 60 tons of bombs.

The Americans could finally enter Aachen and for the first time since the beginning of WWII, the Nazis had to fight in a large German town, but they had an advantage! They knew the town on the back of their hands! They used all the possibilities of guerrilla defense the town could offer by using the cellars, attics, rooftops, sewage network, taking down often the Americans troops from behind.

The Americans had no choice but to fight back with grenades and flamethrowers. Just imagine what the Germans went thru burning alive/dead in the cellars or sewers!

To make matters worse, on the rooftop, the Germans had hidden snipers and even managed to have some artillery brought up to shell the American troops.

Taking and securing the town for sure was no easy task for the Americans.

The battle of intense violence will be the cause of a lot of casualties on both fronts. At least 10,000 American and German soldiers were killed, missing in action or wounded during the battle of Aachen.

The historical center of Aachen was 80% destroyed, luckily the Cathedral where Charlemagne was crowned Emperor of the First Reich is still standing today.

The taking of Aachen on October 21st, 1944 was the first success in Germany and the first breakthrough the Siegfried Line. 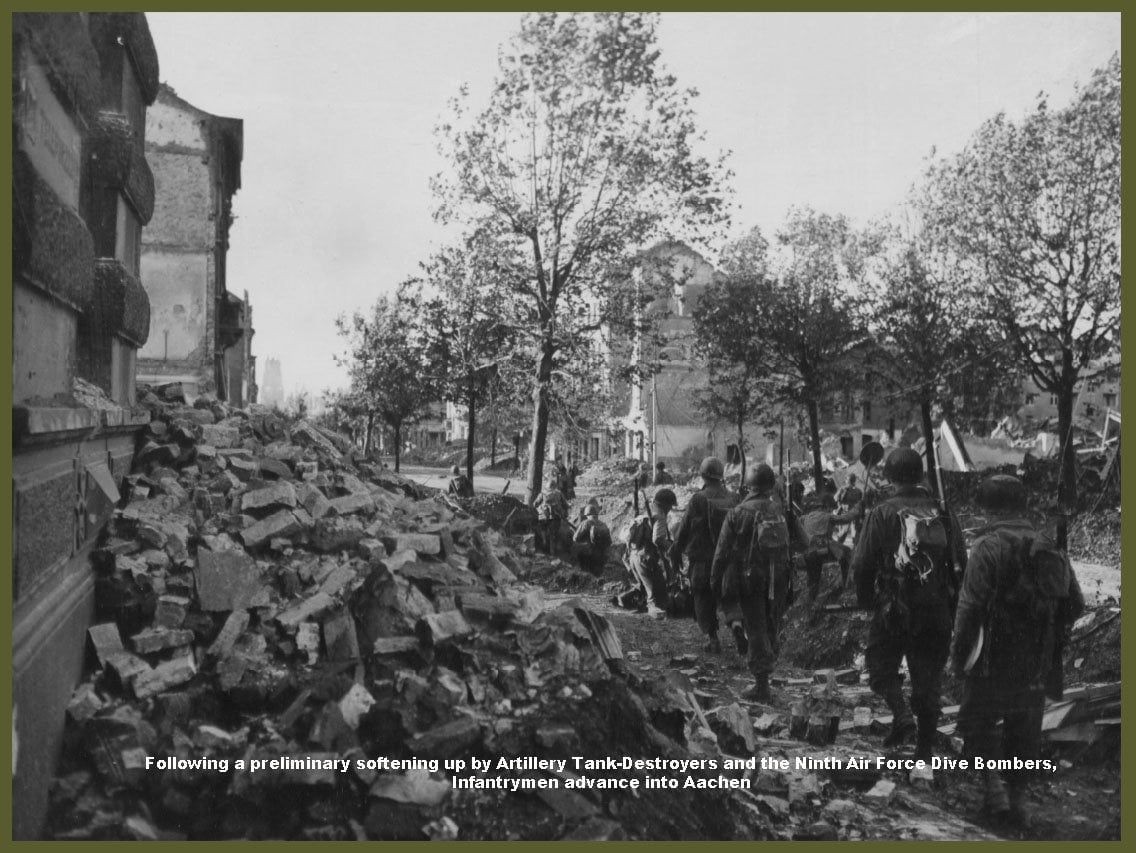 Because of what Field Marshal Model accomplished there, defending the Siegfried Line, Hitler decided to give him command of the audacious operation Wacht am Rhein known by the allies as the Battle of the Bulge which was going to take place about 30 km further down south.

During the three months battle of the Hürtgen forest lets not forget that the presence of other American troops in Belgium, alongside the local resistance out in the open, reassured the population which no longer had to hold back their feeling of freedom. Of course, with some reserve and discretion, as loved ones had been killed or worse disappeared without leaving a trace.

For logistical reasons, the American troops had to hold their positions along the German border while the battle of the Hürtgen Forest continued.

The American soldiers were becoming restless as they knew they were to take and pierce thru the Siegfried Line before the Germans could reinforce it. Nevertheless, the waiting was in some ways beneficial as it was a means for the American soldiers to recuperate, physically and mentally after months of battle since their landing in Normandy.

Christmas was coming fast, the fog, snow, cold were omnipresent, the soldiers as well as the civilians were relaxed...almost a normal life.

No one could have imagined what was to come on the morning of December 16th, 1944 at 0530 hours, Operation Wacht am Rhein at the weakest front of the American lines, the Ardennes forest, had started!