While a road to get supplies in Hatten was finally found, 2nd Battalion of the 315th Infantry Regiment  kept fighting to hold the small part of Hatten it had under its control.

CCR* of the 14th Armored Division was finally in Hatten during the night of January 13th to the 14th, 1945. Colonel Daniel Harrison Hudelson (AAR Spelling) CCR’s Commanding Officer had a plan to launch what it seemed to be a counterattack. Tanks would be pushing north and east from the small area held by friendly troops at 1100am. *Combat Command Reserve. 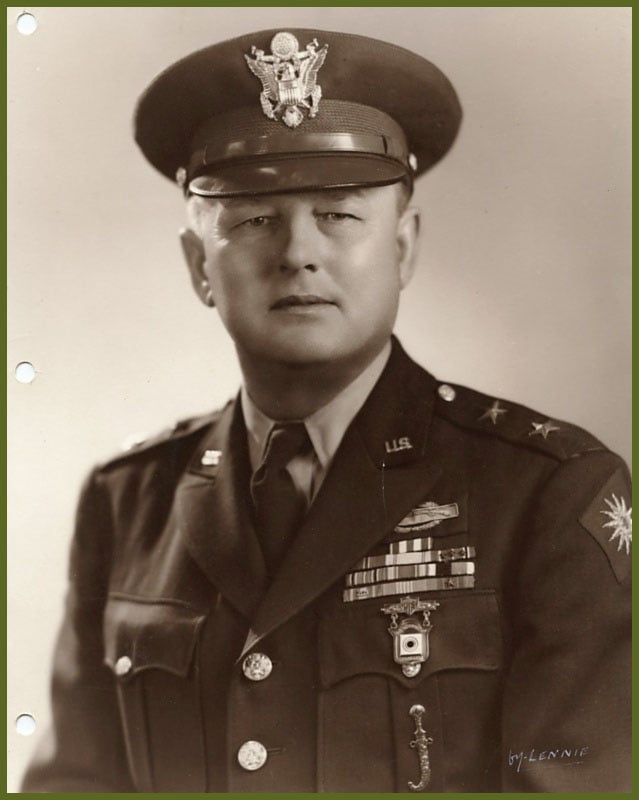 Working hand to hand with the tanks, “F” Company of the 2nd Battalion of the 315th Infantry Regiment spearheaded the attack down the south of the main street by regaining some buildings. “A” Company of the 19th Armored Infantry Battalion as for her was supported by two tanks, went up the same street toward the west meeting considerable German resistance. Germans, veterans as they were knocked out one tank but the men determined to push back the enemy reached their objective.

“E” Company was employed as “a supporting unit” during this attack, this is why when 1st Lieutenant David R. Harding learned about the “A” Company’s success, (19th Armored Infantry Regiment) he moved up his men taking the slightly second cross road. Technical Sergeant Vincent F. Doyle commanded the 2nd Platoon of "E" Company was taken in a dangerous machine gun fire as soon as he jumped off with his men and became pinned down. Afraid and didn’t know what to do he yelled for his Lieutenant who replied “Try to get a detail around to the left and silence those guns”. Re-motivated Technical Sergeant Doyle sent his 2nd Squad under the command of Staff Sergeant Thomas E. Lane (AAR Spelling) to go up and bolted in a wide arc through about 150 yards of an open field and out of the line of fire.

Private First-Class Moy King Ming (AAR Spelling), who according to him joined the Army to fight "Japs", but who on a number of occasions has stated that he liked killing “Jerries” just as well, dashed out several yards ahead of the squad. Rushing the positions, which consisted of two improvised pillboxes joined by a trench which led onto the north main street, thrust his rifle barrel through the aperture of the first pillbox and fired a couple of shots and then tossed hand grenades. Jumping down into the trench, and killing two or three Germans as he went, he headed for the second pillbox, but its defenders had lost nerve. They, five of them, came out with their hands up.

The action of Private First-Class Ming allowed 1st Lieutenant Harding to continue his progression. Controlling now the north and south of Hatten it was the first time now since couple of days that US Troops were regaining ground.

Regaining ground doesn’t mean win the battle, at about 0900pm Technical Sergeant Doyle heard disturbance, after couple of minutes scouting the vicinity, he saw five enemy tanks, three personal carriers coming from all directions. Some tanks had a flame thrower set up and burnt the houses controlled by “A” Company, plus infantry fired with incendiary bullets. And once again US troops had to withdraw. At first “E” Company was missing only one man who came back an hour or so later after being captured twice. He guessed he must have slept through the most of the battle. This umpteenth enemy attacked stopped as soon as all American troops had left the north street. 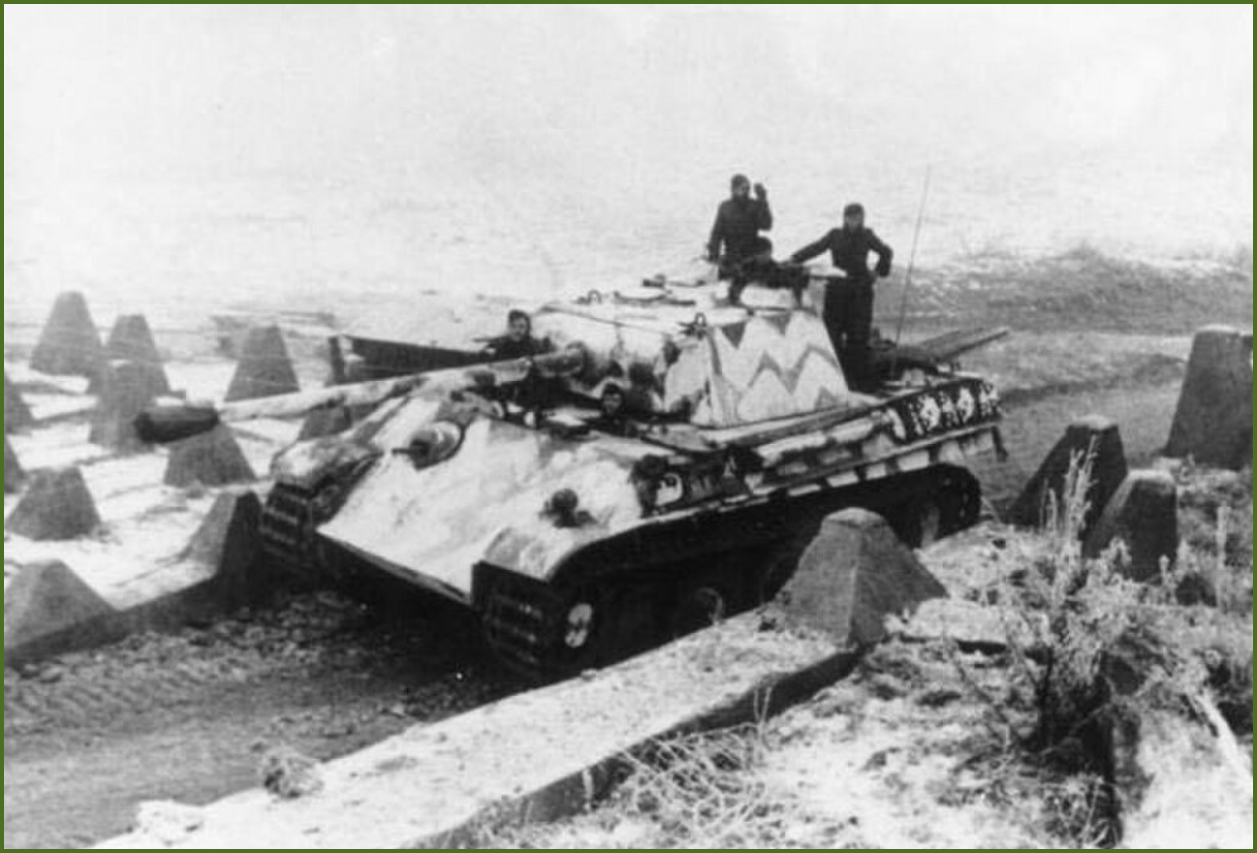 A new offensive took place at 0500am on January 15th, and according to the boys in Hatten, that day will be remembered as the roughest day of the “Hatten Battle”. Although flame throwing tanks had appeared earlier during the battle, this day the enemy seemed bent upon burning up the all town completely. More houses were lost by American troops, enemy tanks destroyed all standing houses one by one, and once on the ground their flame throwing tanks finished the job. The enemy didn’t care, civilians, military personnel, everything which was in a house had to be killed.

Set up in a burning barn, “H” Company had to withdraw. Private First-Class Pete S. Salazar a heavy machine gunner had his weapon set up, while his comrades were retreating, he stayed in position to allow them to escape. He completely wiped-out German soldiers walking up toward him, trying to make his gateway he collapsed from loss of blood but Sergeant Abraham I. Rakusin rescued him. Another heroic action like this one will occur during the day, Sergeant Vincent Muraski from “F” Company, his gallantry allowed the men of his unit to escape. At noon, tanks from the 2nd Platoon of 813th Tank Battalion were attached to the men of the 315th Infantry Regiment in Hatten, bringing orders from higher command stating “Resume the attack at 0300pm in direction of the church". At this time things were getting to the point where, trying to go beyond the “bend” (See map below) was pure suicide as there was no place left to take cover. During the whole afternoon, Germans had launched six counterattacks, all of them were stopped by “G” Company. Enemy dead soldiers were piling up in the orchard in front of their positions. 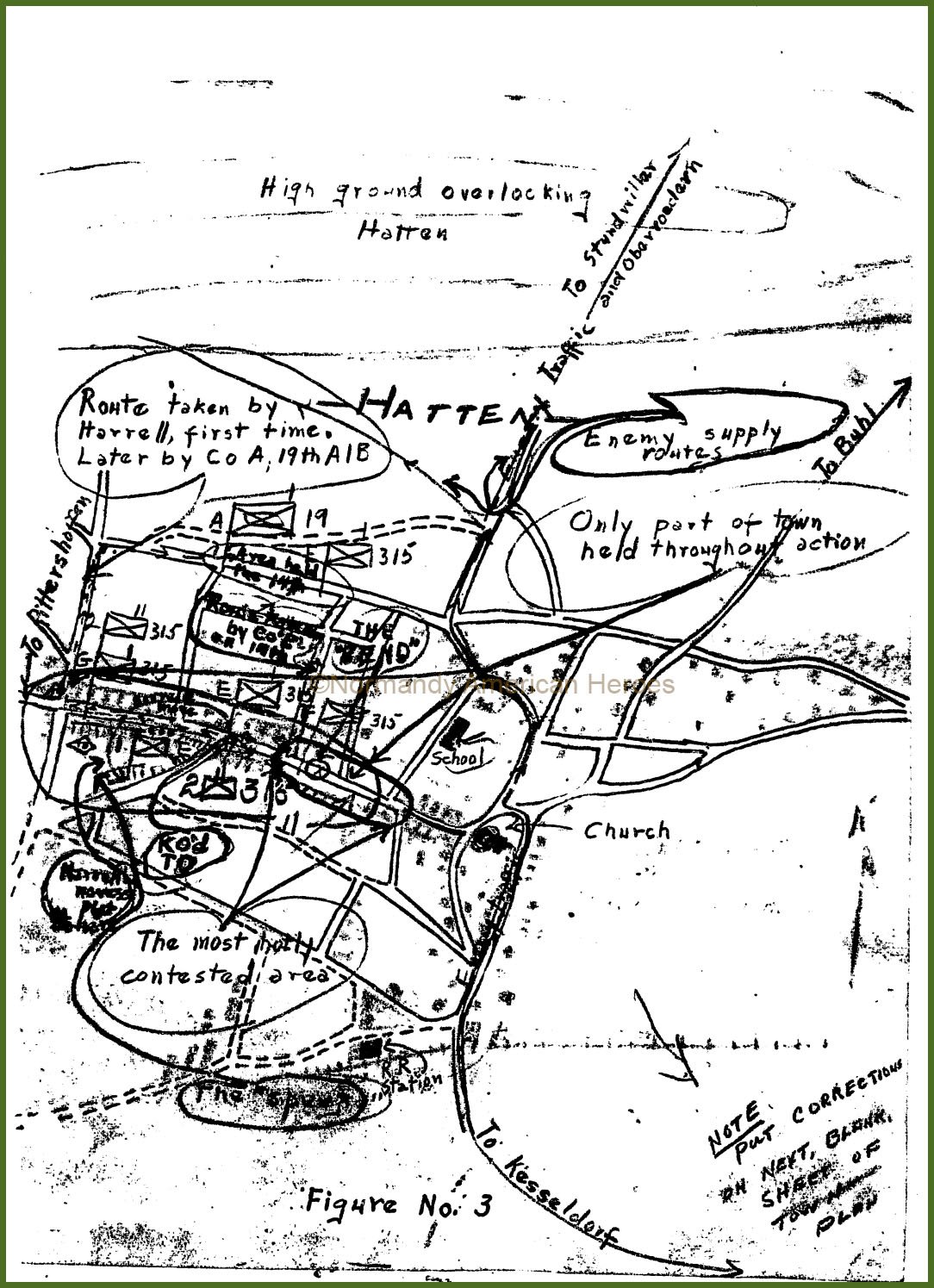 Captain Ralph D. Shrewsbury received reports the all day stating that those counterattacks were “testing attacks” and not the main one. The main force jumped off at 0500pm making Colonel Earl F. Holton calling for help. As the result of Colonel Holton’s desperate calls, arrangement had been made whereby CCR would commit its reserve of tanks and in conjunctions with the 19th Armored Infantry Battalion would attempt to recover the ground lost earlier in the day by the “F” Company – i.e. back to the junction of the Hatten – Rittershoffen road with the main north road leading in from the direction of Stundwiller (See map above). After an all-night battle during which CCR regained and lost the hotly contested pile of rubble beyond the “bend” the situation became somewhat more stabilized.

Until the 19th of January the situation stayed the same, critical. Germans, who were very well prepared, knew that the 2nd Battalion was completely surrounded. The strategy of attack that they had set up consisted in exhausting their enemy, like a lion and its prey. According to reports, ten-thousand shells were fired in Hatten that day.

January 20th marked out the last day of the 2nd Battalion’s heroic stand. On this day an order was handed down for the battalion to withdraw to a new defense line south of Haguenau as it was almost becoming inert. This decision was taken thanks to prisoners of war who stated that during the day, no attacks would take place as their unit would be relieved by a new panzer division.

Shortly after midnight the last 2nd Battalion’s troops departed from town ending the “Siege of Hatten”.