Completely cut off from the world in Hatten and Rittershoffen on January 11th, 1945, 2nd Battalion of the 315th Infantry Regiment was fighting at close range. Men were exhausted, some time running out of ammunitions against very experimented German veterans. Situation was critical and it was time now to save those boys. 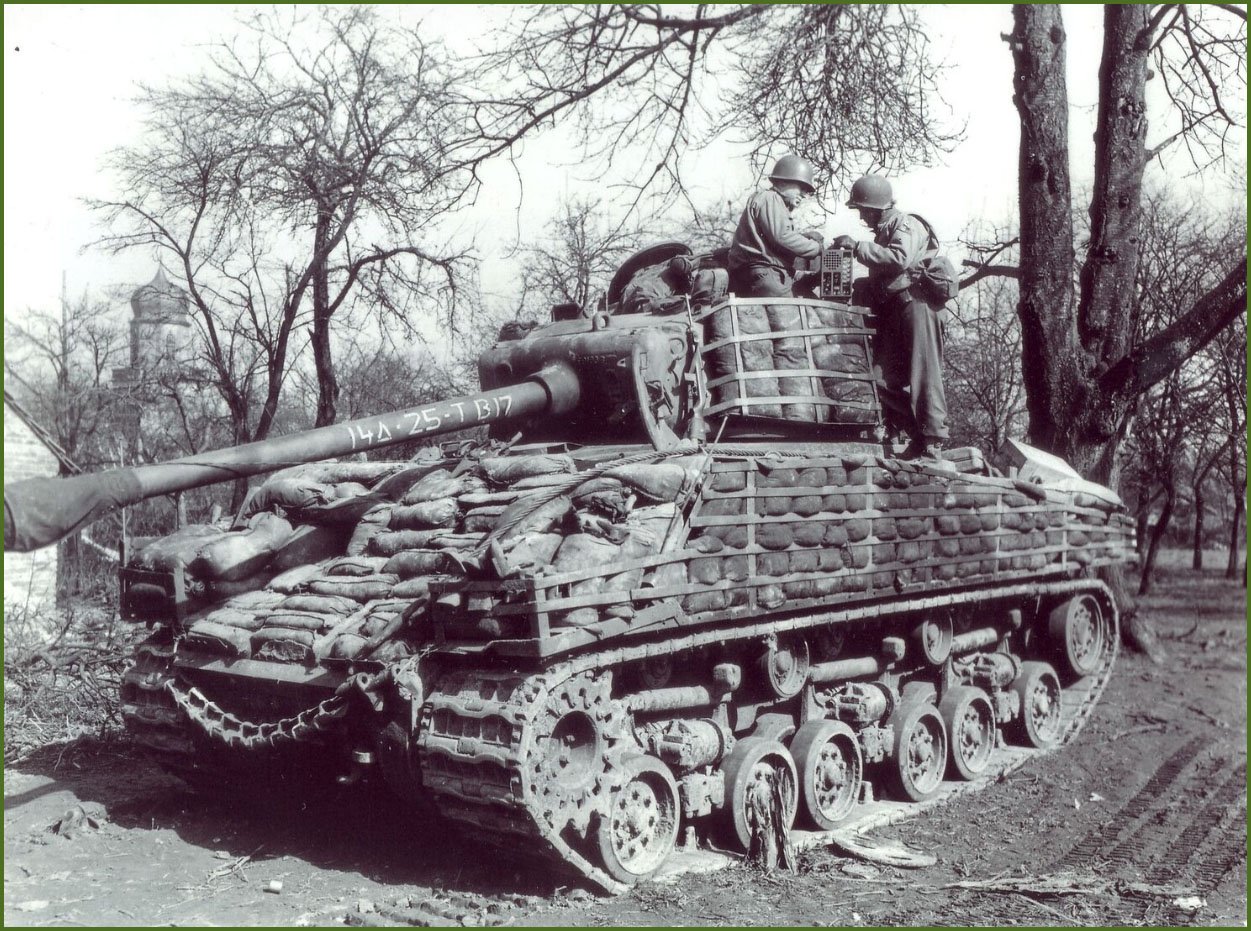 Tank crew from the 14th Armored Division checking their equipment.

In the early hours of January 12th, 14th Armored Division’s officers started to make plans for the relief of 2nd Battalion’s men. This rescue mission contained two parts. First, main body of the CCA* would have to come into Rittershoffen from the southwest with the mission of cleaning out the northwest and southeast parts while the other group will be pushing into Hatten to relieve both 315th and 242nd Infantry Regiments. *Combat Command A

By 0830am, CCA was reported as being in progress, and lucky they were their entry into town was made without enemy resistance but instead of pushing the enemy toward the east, men were caught in a fight in town with boys of the 3rd Battalion. On the other hand, the CCB* was not so successful. How so? Men jumped off late, and were stopped at 1130am while trying to bypass Rittershoffen on the north to swing down onto Hatten. German resistance was heavy, a lot of casualties were accounted during the first moments of the battle, didn’t have the choice CCB withdrew and took position on Hill 178.1 where it would be staying for the next seven days. *Combat Command B 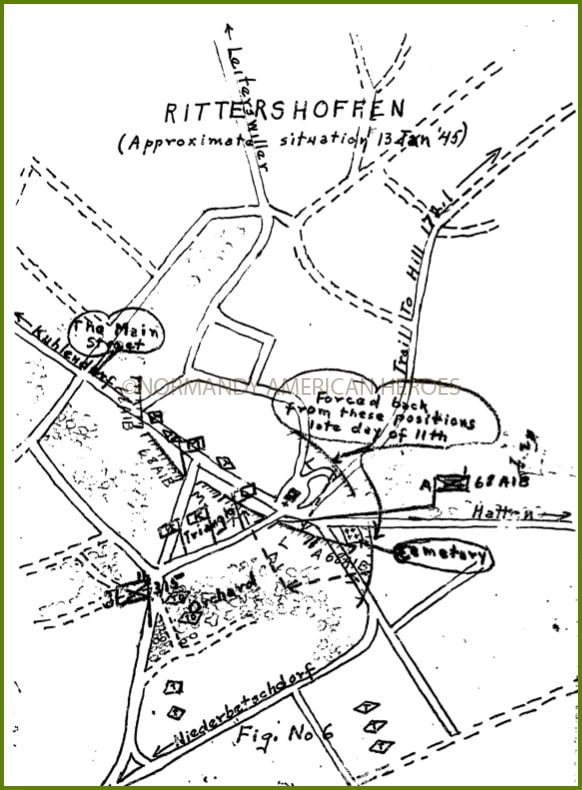 Unfortunately, tanks were not able to help 2nd Battalion’s boys trapped into Hatten, both groups of the Combat Command set up a line of defense running from the north to the south of Rittershoffen.

(Note: The 94th Cavalry Reconnaissance Squadron for the time was helping to hold the right flank between Rittershoffen and the Forêt d’Asbruch to the South - See map Below)

Being completely isolated, running out of ammunitions, and having a number of casualties increasing as time went on, units at the rear spent the day of the 12th to how get supplies in Hatten. The situation was so desperate that in the afternoon, 312th Field Artillery Battalion fired placing shells filled up with medical supplies in town, but it did not prove satisfactory as shells were so badly damage it was impossible to use medical stuff.

Another attempt to get supplies in Hatten was made by 1st Lieutenant Herschel Q. Holly (AAR Spelling) C.O of the I&R Platoon of the 2nd Battalion, who was with the Command Post’s group in Niederbetschdorf. At 0930pm, with eight-men party, he started to walk in the direction of Hatten by following the rail road tracks hoping he would get there.

If you remember, in our last blogs Germans in Rittershoffen had the control of the train station, (see map above) so when 1st Lieutenant Holly reached it, they ran into an enemy machine gun position wounding him. The only concern for 2nd Battalion’s personnel at that time was to get into Hatten to save their comrades, this has been demonstrated once again by 1st Lieutenant Holly and his men. The 1st Lieutenant will wait to be severely wounded before to retreat. As men started retracing their steps a German self-propelled 88mm shot into the group from the high ground northeast of Rittershoffen killing Corporal Arthur Bustamante and no more attempt would be made during the night….except by air.

Plans were elaborated to get supplies into Hatten for air-dropping, pilots asked drop zones to be marked out and wanted to know what making device would be used. Three red bed sheets were discovered by “E” Company’s men for the purpose. At daylight on the morning of January 13th, planes took off on this mission of mercy but the weather got involved making impossible for pilots to see the “panels”.

“G” Company in Hatten fired two yellow flares but the thickness of the clouds made the task impossible too. Only two bundles were recovered, one by Private First-Class Lars T.O Ohlsson (AAR Spelling) at the west of Hatten. In view of the desperate situation, he took an inconsiderable risk of being killed in order to recover the bundle. And the second fell in Rittershoffen instead of Hatten, recovering this one called for even more courage as it fell next to train station. Staff Sergeant Elmer Matthew (AAR Spelling) volunteered to pick up that one and Captain Ralph D. Shrewsbury who knew the danger gave him permission. To the greatest surprise, he made the round trip without meeting any enemy resistance, the trail he took was might be not under enemy artillery fire and had to be protected no matter what because it would be used to bring supplies and reinforcements.

It was necessary to get those supplies in Hatten as quick as possible, Germans harassed nonstop US positions. “F” Company had to fight again enemy flame throwing tanks working hand to hand with infantry. All American guns available in the area able to shoot on Hatten had to do it on call, ALL OF THEM. Men of the 2nd Battalion had to be saved no matter what, even if the town had to be wiped out of the map. Officially this enemy attack on the night of January 12th to the 13th was stop by artillery and it received all of the credits, but everyone in the 2nd Battalion knew in their heart that it was stopped by their comrades trapped in town.

German counterattacks continued during the morning of the 13th, tanks fighting in the north and south of Hatten. Some Germans tried to encircle once and for all the 2nd Battalion that day. Twenty of them in the south went up from the train station toward the center, while others tried to get by the “bend”. (See map below)

Unfortunately for them, 1st Lieutenant Luther J. Harrell from “E” Company requested the last afternoon to move his platoon down onto the “spur” (See map above) street in the southwest. From that position it would be possible to have a view overlooking the train station and to stop “a whole regiment if need be”. It was necessary to keep an eye on the train station as the sporadic enemy fire from that direction was a huge problem. The possibility of the enemy launching an assault against this area was a real threat. As the enemy slowly bellied its way through the fields and orchards, 1st Lieutenant Harrell and his men waited for them in the upstairs windows of their building. 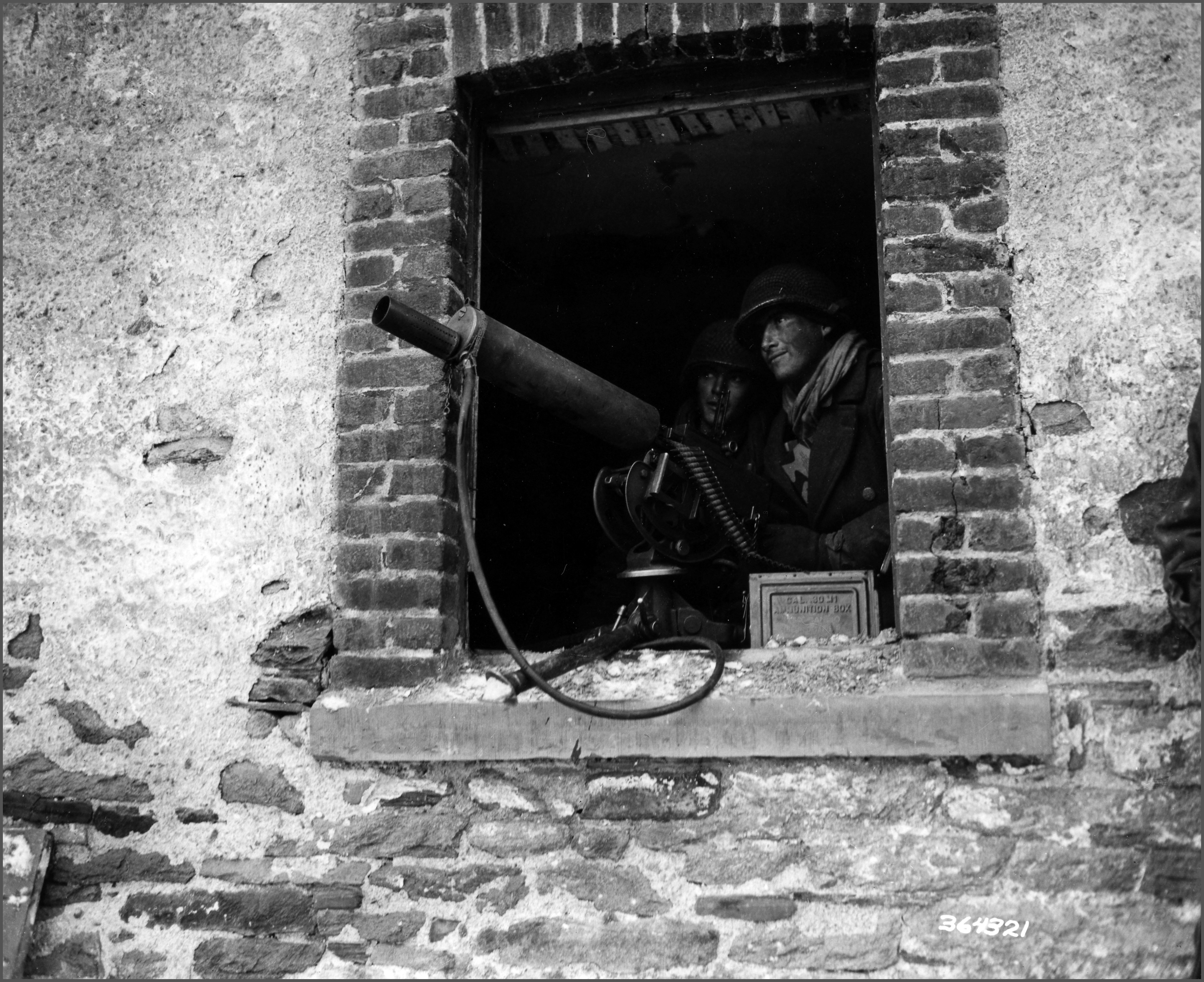 Every position had automatic weapons, BAR’s and light machine guns. Indeed, 1st Lieutenant Harrell was a rabid proponent of the automatic fire school and, some way or other, had managed to equip nearly every man in his platoon with an automatic weapon of some description. When Germans had worked up within 100 yards away from US positions, 1st Lieutenant’s Harrell opened up fire delivering a virtual wall of lead, in one fell swoop practically wiped out the whole German force. By seeing this, the Germans at the east also withdrew.

It was also on that day, to assist CCA and CCB, that the 19th Armored Infantry Battalion supported by the 47th Tank Battalion was brought into position. The idea was to break through the Rittershoffen – Hatten road but the assault in the early hours of the day, 0900am, failed disastrously. By losing a great number of men, vehicles and equipment, everyone withdrew to Rittershoffen to be reorganized. 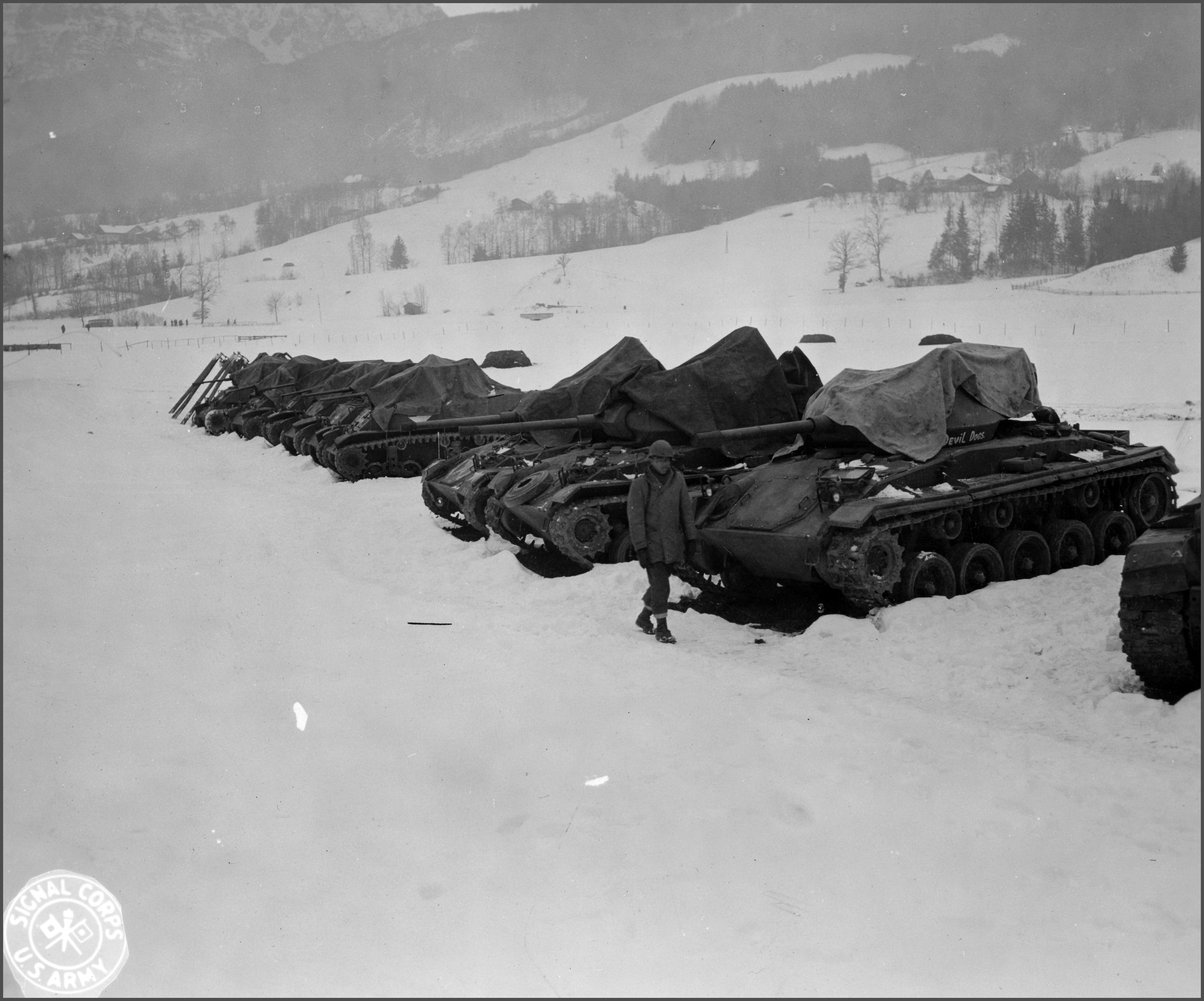 Tanks parked in an assembly area, ready to roll on call.

It took some time for reorganization as a lot of new equipment had to be brought up, but once ready a second attack took place liberating remnants of the 242nd Infantry Regiment of the 42nd Infantry Division trapped in Hatten. Some tanks of the 48th Tank Battalion were also sent in Hatten to meet the continued insistent demands from that quarter for more armor. Three tanks entered the town from the southwest behind the buildings occupied by “F” Company (242nd Infantry Regiment), the man in command who was a Lieutenant upon seeing friendly faces yelled “You’re saved. We’ve come to liberate you. General Joseph F. Smith has ordered us to get you out”.

Most of the 3rd Platoon from this company, the heavy machine gun section, and some others who could not help but hear and see the frantic officer, took him at his word and began heading for the woods south of the town.

In the meantime, as a result of the accidental discovery on the previous day (January 12th) that there might be a safe supply route (See map below) into Hatten, 1st Lieutenant Holly of the I&R Platoon was once more given the mission of organizing a carrying party to take supplies into Hatten. Especially morphine, bandages and blood plasma.

Staff Sergeant William N. Hill, a medic, was with the supply party. Since there was no one in Hatten proficient at administering plasma, his services would be badly needed there. Being aware of the enemy strength in the area, 1st Lieutenant Holly waited CCR* to be ready to follow it on its wheel as a support. This was a good move as the all party made it safely in Hatten and in less than an hour after troops in town were aware that friendly soldiers were coming in, 1st Lieutenant Holly reported to Captain Shrewsbury’s from “G” Company to know which position would be the best to set up an aid station. *Combat Command Reserve.

(Note: Buildings around “G” Company command post were tuned into an aid station.)

Once the aid station set up, 1st Lieutenant Holly went back to Rittershoffen with fifteen wounded men and three prisoners. On its way back he found one wounded man from the 19th Armored Battalion. By 0615pm the mission was considered as a success as it was the first time during the nightmare that troops in Hatten received supplies.

From now on supplies went into Hatten every night over this same route, officer in charge of getting supplies in town used the prisoner of war cage located on Hill 162.5 as a landmark (See the map above) to follow the road opened by 1st Lieutenant Holly.