It was precisely two months after the German counterattack in the Bulge date to date on February 17th, 1945, that the 79th Infantry Division was attached to the XVI Corps and put into the 9th US Army. The mission of the 79th, was to push forward the Roer River to complete the relief of the 137th Infantry Regiment of the 35th Infantry Division. During that time, the all division shouldn’t to be employed this is why officers had to respond only to the orders coming from the Headquarters of the 9th US Army and only the 314th Infantry Regiment took part during “Operation Grenade”.

Colonel Warren A. Robinson, 314th Infantry Regiment C.O started to set up his plan of attack for “Operation Grenade”, the crossing of the Roer River, on the 20th of February. It said that the 1st Battalion will capture Unterbruch, Rolland, Brehm and Hochbrück, 2nd Battalion Kempen, Eckholderdriesch, Berg, and make a feint river crossing if called for. And the 3rd Battalion will seize Karken, End, and the road junction at coordinates 838819. (See map below) 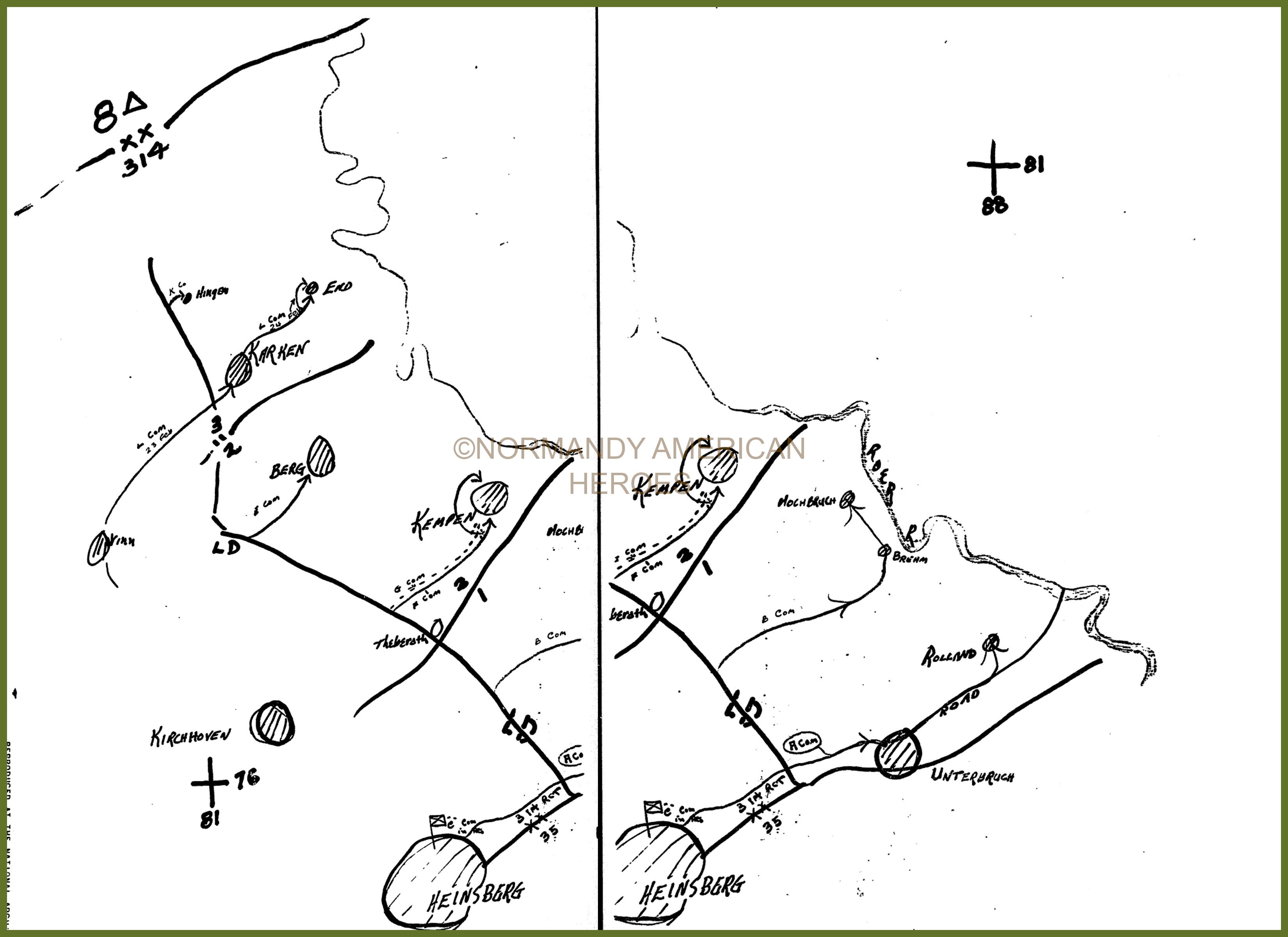 Operation Grenade jumped off at 0330am on February 23rd, and all units of the 9th US Army (except the 313th and 315th Infantry Regiments of the 79th Infantry Division) were attacking to the east. During the first day of the attack, “E” Company of the 2nd Battalion was attacking toward Berg alongside with “F” Company on its right toward Kempen while “G” Company was in reserve.

On its way toward Kempen “F” Company advanced across the field on the west side of the city with its 1st Platoon commanded by Technical Sergeant Edward A. Hagedorn on the right, 3rd under the command of 2nd Lieutenant George F. Malley in the center and 2nd Platoon on the left. Boys faced heavily enemy defenses, as minefields which caused a lot of casualties, only a few men from the 3rd Platoon were successful in reaching the first houses of Kempen. As the entire company ran into minefields covered by automatic weapon fire 1st Lieutenant Robert E. Palmer, Commanding Officer, 1st Lieutenant Theodore R. Pence, Executive Officer and 1st Lieutenant Welles H. Sellew didn’t have the choice but to give the order to withdraw.

At 0600am another attack took place, but unfortunately with the same outcome. Worse, boys who have been wounded either by the minefields or machine gun fire have been left behind. Around 0400pm, “G” Company showed up and came in action with the will to succeed where “F” failed. As “G” Company was in action it was decided that “F” Company will be attacking Kempen by the north, this encirclement turned to be a success as they started to clean up the town shortly after men of “G” arrived in combat.

By 0700pm Kempen was cleared. Once Kempen was under control, “F” Company suffered thirty-two boys WIA and six KIA, amazingly enough, all these casualties were from mines with the exception of two wounded by small arm fire. The largest extent of the injuries, were legs or feet blown off by mines. According to Major Dale D. Hogoboom C.O of the 2nd Battalion, Germans didn’t have medics but took care of the “F” Company’s casualties by giving them soup, cigarettes and wrapped them in blankets

Meanwhile, “E” Company had easier time in taking Berg around 0530am as it was unoccupied.

(Note: Officers of “E” and “F” Companies used cub planes and flew other cities which were their next objectives for February 24th, by doing that they were able to tell precisely were enemy emplacements and fortifications were).

In the meantime, 3rd Battalion under the command of Lieutenant Colonel Ernest R. Purvis also ran into small enemy resistance pockets, as in Karken. That town had to be taken by “L” Company which was under the command of 1st Lieutenant Louis A. Wolpert by doing a pincer attack from the north and south (1st Platoon at the north and 2nd by the south) and then moved on End.

“L” Company assembled at Vinn before to deploy itself by taking different positions as follows: 1st Platoon commanded by Technical Sergeant Flory T. Scorzafava moved to the vicinity of coordinates 823797 and 2nd Platoon went to coordinates 829792. Both Platoons jumped off at 0330 hours, toward Karken, 2nd was moving from the south while the 1st moved up from the north. Contrary to the 2nd Battalion, those troops of the 3rd Battalion didn’t meet minefields or any other enemy resistance and by 0500am all houses were cleaned up.

Once Karken liberated, 1st Lieutenant Wolpert let the 2nd Platoon in the town to bring the 3rd which was in reserve in the woods to deploy it on the frontlines by seizing the town of End.

Contrary to Karken which was unoccupied, End was heavily defended by minefields and at least one company of enemy artillery. Same strategy as Karken was made to seize End, one unit will be attacking from the west (1st Platoon) and another from the east (3rd Platoon) but this time the pincer attack failed. It was at 0530am that “L” Company met its first resistance coming from coordinates 840799 consisting of machine gun and rifle fire from the edge of the town to be precise. (See map below) 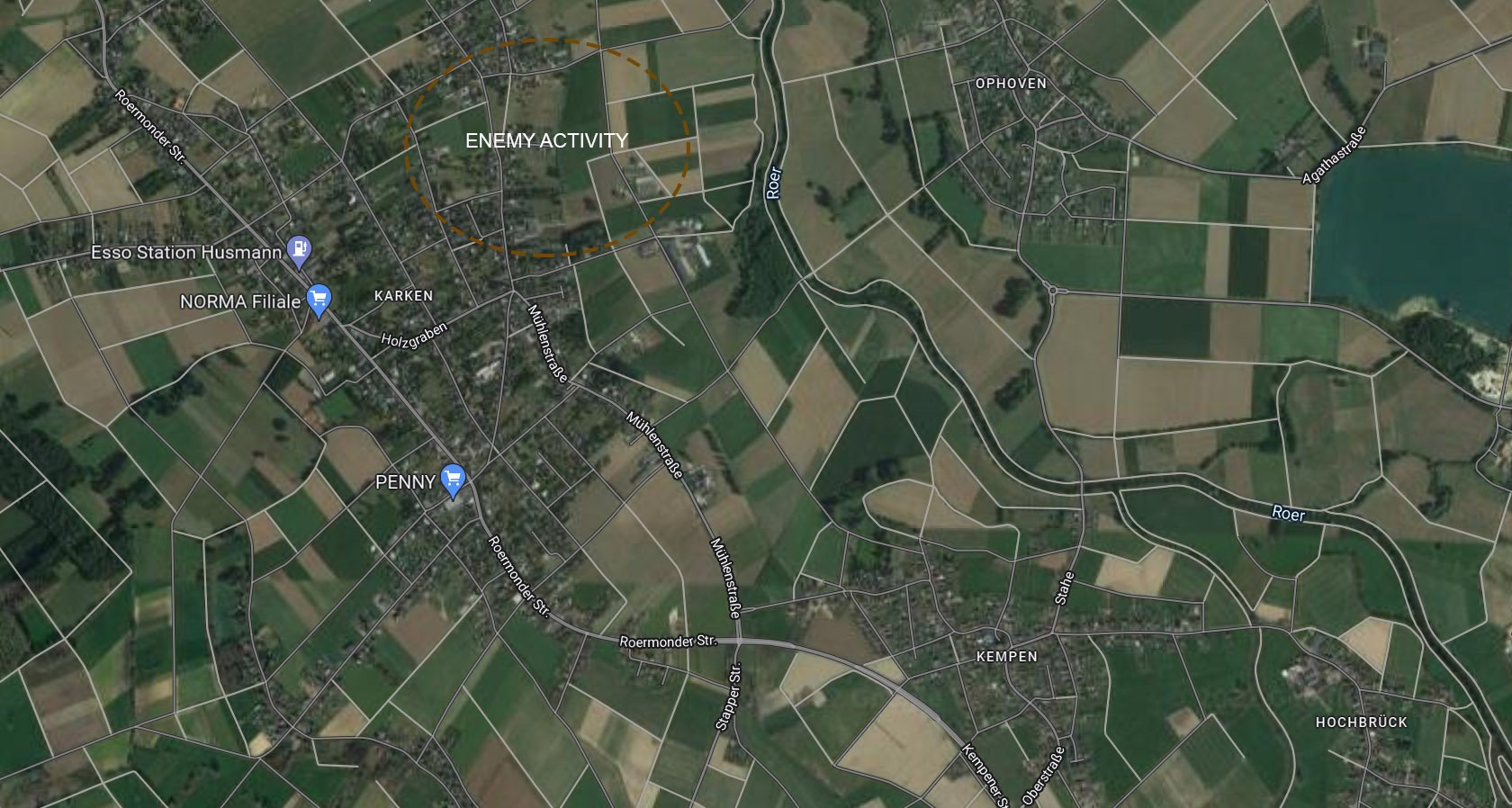 According to 1st Lieutenant Wolpert, Germans defending End had set up machine guns in the rubbles of the houses, as the terrain was flat and open, he thought it would be suicide to attack the town this way so he gave the order to dig in then to wait for the cover of darkness. While men started to dig-in, Private First-Class Clement T. Adams who managed to find a path under enemy fire was successful in taking position inside one house, this was remarkable because from that position this boy would be directing artillery and mortar fire all morning, but every time he stuck his head out, enemy machine gun would be directed on him.

Private Adams was the only one from “L” Company to be in End, the rest of the men withdrew when the order was given. In the early afternoon, Clement would be KIA by a mortar shell and the company suffered a severe loss. At all two attempts were made but both ended as failures, then it was decided to wait for the following morning to try once again to take the town. A new plan of attack was set up and by 0400am on February 24th, 1st and 3rd Platoons were hitting the north and south parts of End.

While boys of the 1st Platoon were advancing, 3rd Battalion’s Headquarters informed “L” Company that five tanks (1st Platoon of “B” Company) from 761st Tank Battalion will be in support as it seemed impossible for the Infantry to seize all alone End. 1st Lieutenant Fred W. Hnatov didn’t have the choice but to send a runner to stop and tell them to wait for the tanks, so Staff Sergeant Claude K. Ramsdail was sent. 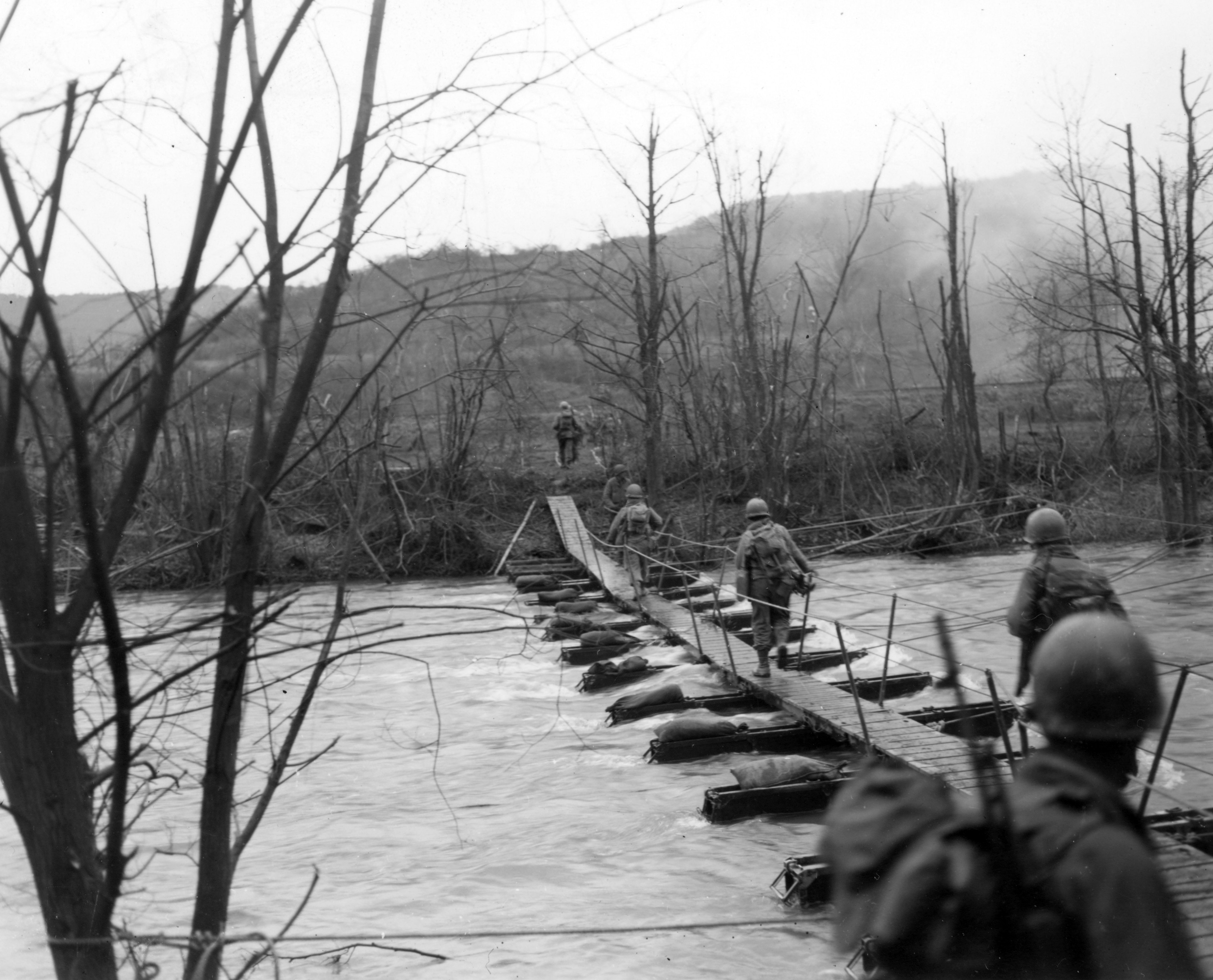 US soldiers crossing the Roer River.

Quotation by Staff Sergeant Ramsdail: “I cut across country from this house (Karken), at about 0410am, and luckily ran into no mines in the fields, booby traps or German patrols. I met the 1st Platoon and brought them back to the new jump-off place where they got into position about 0700am”.

Quotation by 1st Lieutenant Wolpert: At 0645 hours, five tanks came up and we put them into position on the South end of End. My plan was to have the 1st Platoon go into the city on the left side of the road, and the 3rd Platoon on the right, both led by tanks.

When the attack finally jumped off at 0700am the tank leading the column was hit by a mine and had its tread blown off forcing the second one to take the lead, the last remaining four tanks with their machine guns and 76mm guns started to spray End from 0730am to 0800am.

Once again 1st Platoon ran into minefields and had more casualties but thanks to the support of the tanks by 0815am the all force was in End occupying the city. According to 1st Lieutenant Wolpert, enemy had left End at 0500am.

While tanks and “L” Company were taking the town of End on February 24th,1945, “A” Company of the 1st Battalion was advancing along the Heinsberg- Orsbeck road by taking Unterbruch, “B” Company took Brehm while “C” Company’s men were in reserve.

Once the frontline along the Roer River was secured in was now time to do the..

The plan of the 9th US Army for “Operation Grenade” which had the purpose to carry the US Army to the Rhine stated that the XVI Corps was not to cross the Roer River until two days after the XIII and XIX Corps. 35th Infantry Division crossed the Roer near Orsbeck on February 26th at 0600am, but a diversion was made by the 314th Infantry Regiment. How so? Troops of the 79th crossing a river - ©CombatReels.com

As the entire 314th was in position along the Roer River, they made a feint river crossing on February 26th at 0545am to 0735am trying to draw the enemy forces from the main effort. To prepare this feint, 2nd Battalion utilized a preparatory artillery barrage, lowered assault boats into the water, and a large amount of automatic weapon fire was directed at any suspected enemy positions across the river.

At 0545am on February 26th, 2nd Battalion of the 314th Infantry Regiment was supported by “B” Company of the 304th Engineer Battalion for the feint river crossing which had to take place at coordinates 853789. The feint began at 0515am when British smoke pots have been placed in such a position so as to smoke area north of the bridge. While the smoke was spraying, assault boats were brought up to the site of the crossing and placed in the river, by the Engineers.

Once assault boats have been prepared, at 0600am 79th Infantry Division’s artillery guns opened fire with smoke shells on the following areas: (See map below)

And those guns will be shelling those areas until 0630am.

All weapons and guns available had to assist the patrol of the 2nd Battalion. Enemy was spotted at coordinates 875785 (approximately forty German soldiers).

This feint was a success, 35th Infantry Division crossed the Roer River and began its drive toward the north by reducing all enemy positions and strongpoints.