At Le Mêle-sur-Sarthe, 79th Infantry Division was assembled to assist the other elements of the XV Corps in blocking the escape of the Germans to the East. Several enemy groups composed of armored vehicles and of Infantry columns were trying to infiltrate the 79th ‘s lines.

Throughout the day of August 14th, the three battalions of the 313th Infantry Regiment plus the attached units reported small groups of enemies. All Battalions were summoned to vigorously patrol the areas, plus combat patrols were sent as far as the hamlet of LaLeu to reconnoiter and silence out the position if needed.

At first sight, 79th Infantry Division as the other rest of the XV Corps was not sure if the Germans were retreating but their doubt vanished when some enemy prisoners told them, the entire German army has been ordered to completely retreat.

Around 2000 hours, 313th Infantry Regiment received the following order “The XV Corps moved to the East” to be ready for a move schedule at 1000 hours on August 15th. The Corps will move with the 79th Infantry Division on the right, and with 5th Armored Division on the left. The Regiment’s boundary is along the line Maintenon – Senantes up to the river of Nogent-le-Roi. The 106th Cavalry will precede the Division by three hours. The Division then will march in two columns, all units motorized, Combat Team 3 on the left, Combat Team 5 on the right, and Combat team 4 to follow Combat Team 3. The 90th Infantry Division continues to hold the line northwest of Sées with the 2nd Armored Division on their left or West”.

Now it ‘is time to move toward Paris. 313th started to move in column of Battalions as follows: 1st Battalion in lead, 3rd Battalion in the middle, followed by 2nd Battalion with the following attachments:

Passing through the villages and hamlets of Orne and Val-de-Loire counties all the way to Nogent-le-Roi, none German element was spotted.

At 1730 hours, the leading element spotted portions of the 7th Armored Division so it was decided to find assembly areas for the entire Division in the vicinity of Nogent-le-Roi.

On August 16th, 1944, still in its assembly area until late afternoon, 313th  was about to left it for a new one near Coulombs precisely at coordinates 437243, but before to reach it, men have to cross the Eure River passing by the few bridges still intact or built by Engineers.

During the few hours spent near Nogent-le-Roi, the three Regiments of the 79th Infantry Division could rest. While units were resting two companies found into the city, an abandoned German warehouse full of various meats, grains and other condiments plus an airport with airplanes intact and ready in use. And by 1800 hours, Regiment completed its move across the river.

The road toward Paris continued, there was not really any objectives or places to seize but only to advance toward the city of light. Some scattered Germans who had still the will to fight were reported ahead of the 313th, boys cleaned them out without problem.

Since its arrival in France on June 14th, the Regiment as the entire 79th Infantry Division encountered only German night or reconnaissance flights until now. On August 17th, wave after wave, German airplanes machine-gunned the American column but thankfully didn’t cause any damage. By the end of the day, boys thanks to their 30 and 50mm caliber small arms fire, shot down three of them. 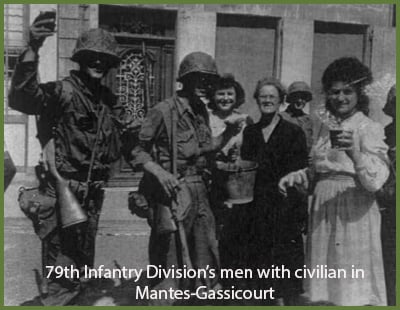 ©Photo from Combat Unit of the 79th Infantry Division.

The order to move into Paris outskirts was given on August 18th at 0950 hours with the objectives to take up defensive positions southwest of Mantes-Gassicourt. The advance began at 1330 hours with 1st Battalion in lead followed by 3rd and 2nd in the rear still meeting slight German resistance.

79th Reconnaissance Troops destroyed trains carrying enemy soldiers attempting to cross the Seine River, and all units of the 313th Infantry Regiment captured the railroad in the vicinity of Perdreauville before to close in around 2200 hours.

The Seine River was just in front of 313th Infantry Regiment, some German soldiers were still dug in into the woods, Headquarters summoned 1st Battalion plus one Company of the 2nd to clean out the area at 0700 hours on August 19th.

"C" Company of 1st Battalion was also sent to check the ferry at Rosny-sur-Seine but reported Germans destroyed it. The enemy was still entrenched on the North bank of the Seine River opened fire upon them but men overcome the situation.

What was embarrassing for the American troops was when the German army were retreating, they discovered either abandoned armored vehicles, weapons, dead animals “BUT” there were still some determined soldiers to slow down their advance.

Note: Civilians in the area revealed that Germans used Ferry’s of Rosny-sur-Seine and Mantes-Gassicourt to transport troops and supplies North and South of the Seine River.

Before to cross the Seine River, both flanks have to be secured. Colonel Sterling A. Wood commander of the 313th Infantry Regiment set up its Command Post in a hotel at Rolleboise overlooking Mantes-Gassicourt, La Roche-Guyon and led a platoon over the dam at Rolleboise to know if there was any German left. By this action Colonel Sterling A. Wood had earned the distinction for being one of the first American soldiers to cross the Seine River.

During the next two days, 313th crossed the Seine River, the entire 79th Infantry Division extended its bridgehead and gained information’s from civilians that Germans were heading back to attack. 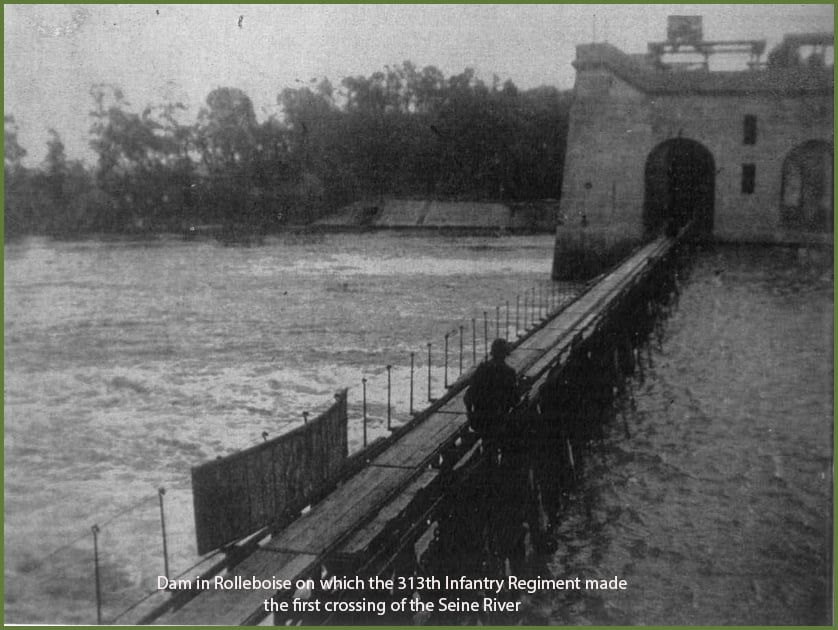 ©Photo from Combat Unit of the 79th Infantry Division.

The Regimental commander deemed it was necessary to send men to understand what were the enemy’s intentions. To do so, a Task Force was created and set.  Where ? To the castle of La Roche-Guyon turned into the headquarters of Field Marshal Erwin Rommel.