315th Infantry Regiment in pursuit of the German army

During the afternoon of August 15th, 315th Infantry Regiment started its move toward Paris, motorized. The first step was a move of approximately 60 miles passing through the village of Le Mêle-sur-Sarthe, in which 2nd French Armored Division was already in. Thence to Loisail and Boissy-Maugis, northward to the Forêt de Longny, then eastward to Senonches and Chateauneuf-en-Thymerais.

In the early hours of August,16th a stop was made in the vicinity of Chêne-Chenu. This move occupied the greater part of the night of August 15th to August 16th.

315th Infantry Regiment made a stop in Chêne-Chenu in the early hours of August 16th until late afternoon. Once rested, men have retaken the road in direction of Villiers-le-Morhier, just South of Nogent-le-Roi. Regimental CP was set up in a former factory, which was until August 15th, 2000 hours an SS Command Post.

It seemed from this moment the 79th Infantry Division was not far away from the German army on its escaping race but as Paris got closer, some questions emerged. Would the Germans defend Paris until the last man? Were they going to want to fight where their fathers or grandfathers had fought during the First World War?

At this time the mission of 315th was to create a bridgehead across the Eure River and to take defensive positions at the East. By doing so, Armored vehicles would have the time to come up and to establish themselves for a major offensive.

It is hard to believe during war time there may be traffic jams but it was the case. Roads were jammed with columns and columns of vehicles “bumper to bumper” stretching back 150 miles. 315th Infantry Regiment’s Officers as the other ones of the 79th Infantry Regiment though the same thing “How Germans would stop our avalanche of vehicles? It is impossible!”.

On August 17th, 1944, 315th spent the day in Villiers-le-Morhier, it was a relatively quiet day, major excitement being caused by the Luftwaffe. During the entire day, not one or two but seven planes were spotted but five of them were shot down by antiaircraft guns. One pilot was made prisoner by “A” Company of 315th Infantry Regiment claiming to have shot thirteen American planes and four British planes.

On August 18th, order to cross the Seine River was received at the 315th’s Command Post. Where? In Mantes-Gassicourt southwest of Paris, however order changed for the Regiment. While the rest of 79th Infantry Division was advancing toward Mantes-Gassicourt, 315th Combat Team was ordered to go to the city of Houdan, to defend it with the 5th Armored Division from a possible enemy counterattack coming from West and East.

While the Regiment was in Houdan on August 19th, it received the visit from a prestigious guest, General George Smith Patton. The finest Command Post was selected, it being set up in the town itself in a very charming old house with a glorious garden. 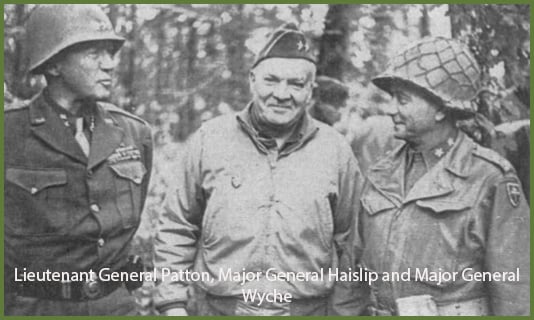 ©Photo from the Combat Unit History of the 79th Infantry Division.

Finally on the next day, men joined Mantes-Gassicourt to cross the Seine River. Before to join the rest of the Division, they made a stop in Rosny-sur-Seine, once again Command Post was set up in a beautiful place, in the castle of Mr. Jean Lebaudy known as “Sugar King”.

(Note: Jean Lebaudy was a French industrialist born on September 8th, 1894. When France was drawn in the First World War, he was enlisted in the 7th Infantry Regiment of Dragon. In 1916 Mr. Lebaudy is volunteer for specialized airborne missions under the command of Colonel Jacques Balsan. During the Second World War, he joined the French Resistance and formed the famous resistance network "D'Artagnan Network". For his actions during the war, he was awarded the French Croix de Guerre Medal, Légion d'Honneur and Resistance Medal).

As the factory in Villiers-le-Morhier, the  castle was two days before, a German High Command Headquarters. While searching for enemy documents, Sergeants Gwin and Bielli (AAR Spelling) from HQ Company found a motor in working condition which they managed to rig up in conjunction with the Seine River to create shower bath for the men.

Crossing of the Seine River was accomplished on August 21st, 1944, by the Regiment less 2nd Battalion which crossed it during the previous night by means of a tremendous rubber pontoon bridge made by 304th Engineer Battalion. Following the river bank by turning southward, the next objective was the village of Limay. 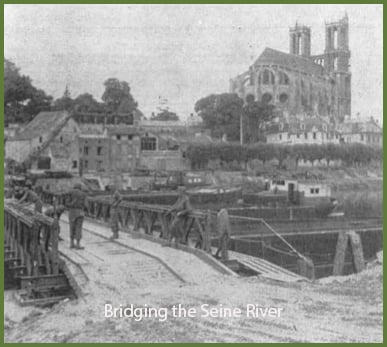 ©Photo from the Combat Unit History of the 79th Infantry Division.

79th Infantry Division who freed Cherbourg in less of three weeks, succeeded in holding back SS Troops in La Haye-du-Puits was the first American Division to cross the Seine River. On the same day, Lieutenant Robert G. Kofler from Prisoner of War Interrogation Team attached to the Regiment drove all the way to Versailles and to the outskirts of Paris without once being spotted by the enemy. It showed once again German Army was retreating as fast as possible.

August 22nd was spent in the outskirts of Limay, the mission was to maintain the bridgehead as long as possible to prevent Germans to counterattack. 79th Infantry Division’s lines were machine-gunned during all the day by German planes with the will to destroy bridges made by the Engineers over the Seine River. Enemy air activity was might be intense, several of those were shot down by the antiaircraft gunners, very well hidden. As 315th Infantry Regiment was on the other bank of the Seine River, and Germans were trying to destroy bridges over the river, there were no doubt, men were part of a drive to encircle Paris.

Germans were might be retreating, they launched a counterattack with Infantry Troops and four tanks, in the early hours of the 23rd of August against 315th 's left flank with the will to encircle them.

The attack was repulsed, thanks to the commander of  “E” Company  Lieutenant Herndon and his men who didn’t stop shooting despite the enemy tanks and “B” Company under the command of Captain Alexander M. Patch. “E” and “B” Companies didn’t just repulse the enemy but made eighty-four prisoners of war.

The bridgehead was growing much more and was more powerful as more troops were crossing the river. 30th Infantry Division which for the moment has not yet cross the river was on the South bank and was former neighbor of 79th Infantry Division back in time at Camp Blanding, Florida. 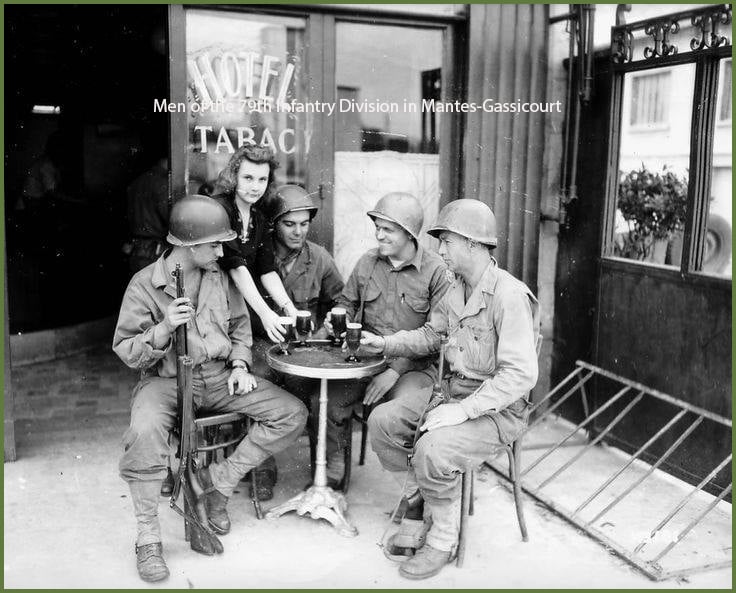 (Note: On August 24th, 79th Infantry Division was once again part of 1st US Army)

August 25th, was surely the quietest day experienced by the Regiment to date, none enemy was spotted, none a single bullet was fired. As the entire Division had crossed the Seine River and bridgehead was enough stronger, plan was still to defend until such time as 30th Infantry Division and the 5th Armored Division could make their crossing.

79th Infantry Division  and 315th Infantry Regiment will not stay forever in defensive positions, it is necessary to continue the advance through France.

On August 27th, the attack jumped off but this day turned out to be one reminiscent since Cherbourg Campaign as the enemy was well dug in. After several weeks of pursuing Germans over the hills, across rivers, contact was finally made. Precisely the attack jumped off at 1600 hours with the 315th Infantry Regiment on the left and the 30th Infantry Division on the Regiment’s left flank.

The attack was launched through the woods with tanks (One Platoon of “C” Company of the 749th Tank Battalion was in support of Battalions) but as woods were dense it was impossible for them to get through. No matter what, it was necessary to capture the high ground at the edge of the forest running in a northwesterly direction in the vicinity of the town of Sailly, about 6000 meters northeast of Limay.

Sixty-two Germans were made prisoners of war, they reported they would have surrendered but they were too afraid to come out from their shelters due to the terrific artillery shelling.

August 28th was one of the roughest since Hill 84 near La Haye-du-Puits, “C” Company suffered many casualties as the enemy was well dug in and camouflaged. Germans opened fire on them at first sight wounding Lieutenant McPeters, Commanding Commander.

The attack was resumed on the next day, jumping off at 0800 hours with 1st and 3rd Battalions abreast and 2nd in support.

(Note: Line of Departure was the line of woods running East and West due South of Sailly.)

Troops advanced toward Sailly making a coordinated attack. Four Artillery Battalions firing on the enemy into the town while, the tanks were moving in with the Infantry troops behind them. By 1330 hours 1st Battalion was in Sailly making several prisoners. By the end of the day, 315th made 269 prisoners of war.

(Note: During the German counterattack on August 23rd plus the two days of battle of August 27th and 28th, 1944, 315th Infantry Regiment suffered a large amount of casualties:

Once again roads, inland roads were jammed with piles of dead Germans still unburied, dead horses, destroyed vehicles, smashed carts and wrecked artillery pieces. The loss in men and equipment could be likened to the destruction of Fortress Cherbourg.

As the enemy was again retreating, a combined foot and motor march took place on August 29th, 1944, during the entire day on a distance of 18 miles. This was a new type of march having lately been adopted, insofar as the foot and motor elements started at the same moment with the motors keeping pace by moving in bounds, consequently all arrived at the destination at about the same time.

During the movement eighty Germans were captured, they were from small pockets of resistance hidden in the woods who were forced to leave their shelters as artillery delivered hell on them.

During one of motor halt, five Germans were spotted running in the woods forcing men to deploy, picking up their gear. The German leader from this little poor force waved a white flag and all of them surrendered. Lieutenant Schwarts (AAR Spelling) from Interrogation Team have taken personal charge and the situation was immediately under control.

Technical 4 Louis E. Capdevielle from Service Company said:” Had the leading German carrying the white flag been unfortunate enough to trip upon leaving the woods, there would have been five dead Germans.”

When 315th’s Command Post was set up, Private First-Class Henry F. Jones yelled “Enemy” and all reached for their weapons. Private Jones noticed that the bushed had moved, after investigation it was found eight German paratroopers used as Infantry were flushed out.

315th continued its road of advance still by motor and foot elements, it was the first to enter the town of Marines in the course of their Northeastern surge. It was the first time since the arrival in France maps were different.

For the first since two months men could read “France – Belgium” on their map. It was apparent that most of the German Army had withdrawn from this part of France as the only resistance was from small isolated groups which after firing some bullets, surrendered without hesitation.

A stop for the night was made in the vicinity of Angy and this ended the month of August 1944.