On August 2nd, 1944, General Omar Nelson Bradley contacted General Frank U. Greer to transmit him new order. 79th Infantry Division has to seize now the town of Fougères. 313th Infantry Regiment was already on the move to free the city, while 314th Infantry Regiment, was closing in an area around coordinates 334915 (around roundabout linking roads D-15 and D-798) , South of Saint-James.

It was around 0800 hours on August 3rd, when 314th’s boys left their assembly area, then two hours later the motor elements followed. By 1230hours all elements of the Regiment were in position North of Fougères. The mission? Take up defensive positions with the 313th Infantry Regiment was on the southeast outskirts  to prevent any German counterattack. 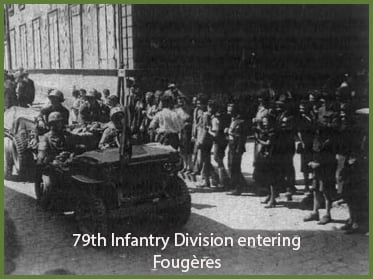 ©Photo from the Combat Unit History of the 79th Infantry Division

But before to leave toward the South of the town, a Battalion and Special Unit Commander’s meeting was held at 1445 hours, into the Regimental Command Post to discuss about the defensive plan. Fifteen minutes later, it was decided to have all three Battalions on line in order to left to right: 1st Battalion, 3rd Battalion and 2nd Battalion.

To see if their plan will work, all Battalion Commanders were out to reconnoiter, General Frank U. Greer who was coming back also from a reconnaissance mission, decided otherwise and changed the plan. He suggested new positions to be occupied.

Once adjustments were completed, troops moved at 1615 hours to occupy a defensive line running from coordinates 418819-428800-430790-411758.  Precisely from the road "Forestière de la Croix Janvier" until the hamlet of La Garie along Couesnon stream.

August 3rd, also marked the transfer of the 79th Infantry Division into the XV Corps. The entire Regiment spent the next day to reinforce their positions.

It was now time to move from Fougères and to reach another town.....Laval. The order to move toward Laval was received at 0135 hours on August 5th, 1944. 314th was assigned the mission as the 313th and 315th to seize bridges, and roads so the crossing of the Mayenne River can be done without encumbrance.

All elements of the Division were on their way to cross the river but as you probably know, the German army was might be retreating , there were still some fanatic soldiers to slow down the American advance.

313th Infantry Regiment’s column had to face some of these German soldiers in the vicinity of La Croixille, northwest of Laval and forced the 314th to be pulled into an assembly area near of Dompierre-du-Chemin around 1400 hours.

The movement restarted around 2100 hours but this time in using Quartermaster trucks, several vehicles to a position 9 miles West of Laval.

The crossing of the Mayenne River was about to be made. On August 6th, around 0215 hours the order for the crossing was received. Each Regiment had a special task:

Couple of minutes before 314th starts to move to accomplish its mission, Colonel John A. Gloriod arrived at the Regimental Command Post with a new plan to move the Regiment by vehicles to the road leading off to the main road (D-211) toward Laval at coordinates 729418.

Boys passed the Initial Point at 0650 hours and were picked up by the trucks, and detrucked at 0830 hours.

The Reconnaissance Troops spotted an enemy resistance at the West of Changé, it was necessary to deal with it to cross the Mayenne River without troubles.

Once this enemy force was silenced out, 1st Battalion could finally cross the Mayenne River in Changé. The crossing started at 1542 hours, which allowed to create a bridgehead then to move further. As Germans had blown up the stone bridge, foot troops were ordered to stay out until Engineers have completed the building of a bailey bridge.

The last elements  finished to cross the river at 2015 hours and went into defensive positions to protect the bridgehead along a line at coordinates 695514-698502-690494-681486. (Back in the war those coordinates indicated fields, nowadays coordinates 695514 represents the  Golf Club of Laval and coordinates 681486, Germinal dead-end). 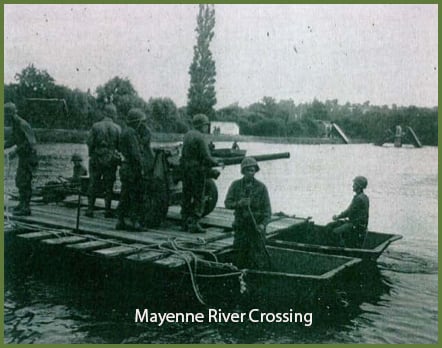 ©Photo from the Combat unit History of the 79th Infantry Division

Once elements of the 79th Infantry Division have crossed the Mayenne River it was about to take Le Mans before the final drive toward Paris.

August 7th, was spent in doing the  crossing of the armored vehicles, and in moving all troops. All elements moved on a distance over a length of 24 miles from Changé to an area West of Loué.

On the next day, 1st, 2nd and 3rd Battalions were on the both side of the road (D-21) running from Brulon to Loué at coordinates 124344. To advance toward Le Mans, men had to pass through the villages of Palais, Loué, Tasillé and Crannes-en-Champagne, with the purpose to join the 313th Infantry Regiment.

Once Le Mans was secured, it was necessary to defend it, the Regiment was ordered on August 9th, to take up defensive positions in the northeast outskirts but the order was canceled.

Indeed, German army was routed, it was learned from enemy prisoners that the order of the full retreat of the entire German army was given. So, at 2000 hours, Colonel W. A. Robinson, Lieutenant Colonel James P. Davis and Major William H. Hillier attended a meeting at Division Headquarters for the final drive toward Paris.