314th Infantry Regiment - Cross the Seine River no matter what

Before to move on Paris, 314th Infantry Regiment was in Division Reserve on the 17th of August 1944, men had the chance to rest by watching the world premiere of “Casanova Brown” starring Gary Cooper and Teressa Wright which allowed them to forget for few moments the war.

At 2130 hours, orders were received for a motorized move at 0800 hours on the next day toward Mantes-Gassicourt.

The move was scheduled at 1400 hours on August 18th, and called for an order of march as follows:

And stated that vehicles had to maintain an interval of 75 yards and not exceeding twenty miles per hour and all aircraft guns were to be manned.

As always, the time of departure was changed to 1300 hours, an overlay was received at 1105 hours showing the route men had to follow to join Mantes-Gassicourt and defensive positions to be taken up southwest of the village.

On the 19th at 0930 hours the decision to send a Task Force into Mantes-Gassicourt was taken. A Company of light tanks, Intelligence and Reconnaissance Platoon, Engineer Platoon, and “A” Company under the supervision of the Regimental Executive Officer entered the village at 1045 hours. The mission? Prevent any German movement on the South bank of the Seine River. "A" Company in Mantes-Gassicourt overlooking the Seine River - © Footage CombatReels.com

While boys of “A” Company were digging along the Seine, at about 1430 hours, coming down a road across the river, a rider and his motorcycle were spotted. The driver took up out a map believing he would find information about 314th's strength. Upon this, men opened fire and he fell on the ground. Sergeant Robert Hanill (AAR Spelling), Sergeant Joseph Tunnell (AAR Spelling), Private First-Class Darrel O. Salisbury and Private Winfred R. Adams (AAR Spelling) volunteered to cross the river in a civilian boat and succeeded in getting back the driver.

Late in the evening at 2300 hours, 2nd Lieutenant Stockbridge Bacchus from “A” Company, took command of a patrol of three men (Private First-Class Walter Pohlman (AAR Spelling), Private First-Class Otis Culpepper and Private Firs-Class Edward Everson) to check the bridge across the river at Mantes-Gassicourt as Germans in their retreat might have destroyed the bridges over the river to slow down the American advance and to take position on the island between the North and South banks of the Seine River.

(Note: The patrol could not get back until 0800 hours the next morning.) Patrol coming back with the German driver - © Footage CombatReels.com

In the meantime, the Regiment received the order to have its men ready for the crossing of the Seine River as its objective was the high ground South of Saint-Martin-la-Garenne. 314th will cross the river between coordinates 56 and 59 in assault boats provided by the 304th Engineer Combat Battalion. A Liaison Officer of the 304th arrived at the Regimental Command Post with the following information: “There would be seventy-six assault boats available at the crossing site at 0500 hours”. 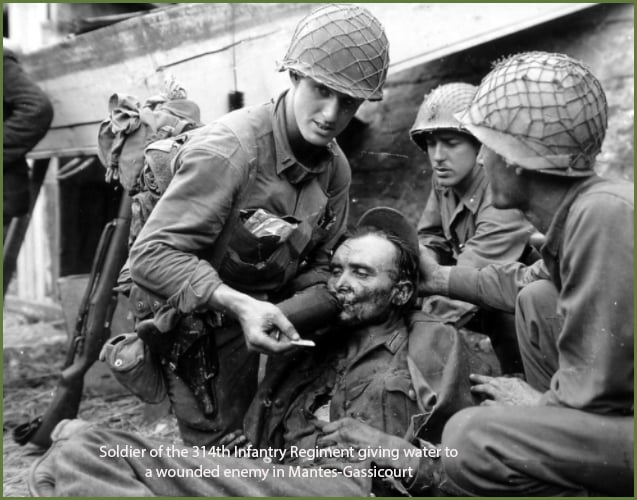 The 314th Infantry Regiment had to wait before to cross as the area between coordinates 56 and 59 had to be clean out of enemy presence by the 313th Infantry Regiment. Once done the men could finally cross the river passing through the city of light.

The crossing started at 0824 hours on the 20th of August with assault boats (1st Battalion was the first to do the crossing) and by 1100 hours all foot troops of the Regiment had crossed the river.

(Note: Only “E” Company of the 2nd Battalion crossed it at 1300 hours as it was assigned another mission.)

By 2000 hours the last vehicles were over the Seine River.

Other vehicles of the Regiment (Regimental ammunition train, remainder of the tactical vehicles of the Battalions and vehicles of 304th Medical Battalion) crossed the river but by bridge. The only difficulty came from the two ½ vehicles as they were too heavy to cross on rafts. Vehicles of the 314th and attached units crossing the Seine River - © Footage CombatReels.com

While vehicles were crossing the Seine River, foot troop had to investigate the North bank of the river, at 1500 hours 1st and 3rd Battalions advanced on the road North toward Limay when they spotted two enemy trucks. The first truck, a gas and ammunition carrier, was destroyed by a 1st Sergeant of “C” Company. The second was a personnel carrier, men loaded in that truck took up position forcing 1st Battalion to deploy. The battle took place until 1930 hours, and twenty-five to thirty Germans were made prisoners of war.

While 1st Battalion was dealing with those trucks, further North 3rd Battalion met small groups of resistance. One of these groups came in between “L” and “I” Companies but was rapidly eliminated by “K” Company.

By 2130 hours the Regiment was in position on a line running from coordinates 624660 to coordinates 626650. In this area five 88mm guns with eight 20mm antiaircraft guns were taken. 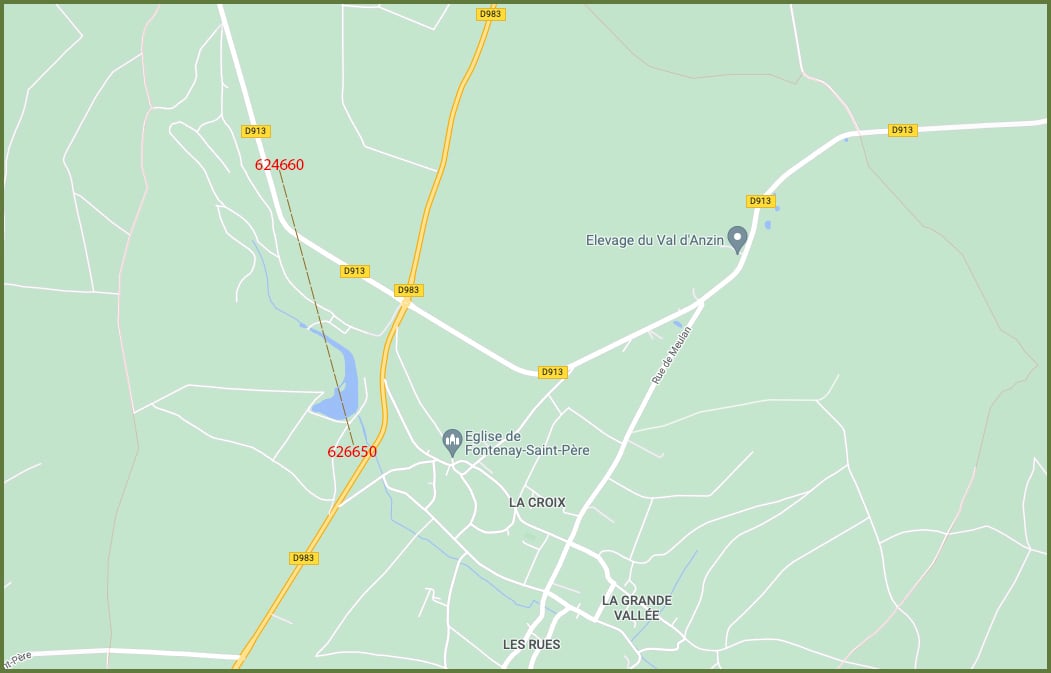 During the 21st of August and despite the heavy artillery fire falling on them, Germans were determined to prevent the 79th Infantry Division to establish a bridgehead. This is why “F” Company of the 2nd Battalion with a Platoon of Antitank Company and tanks moved at the East of Limay to secure the town and repulsed any advance upon the village.

Three Battalions then moved toward their new positions finding themselves between 1830 and 2000 hours under considerable enemy fire.

As a German force was spotted in the vicinity of Guitrancourt ahead of the 3rd Battalion, “K” Company was alerted at 1230 hours on August 22nd, to go into village with light tanks as supports. The “cleaning” started at 1520 hours and lasted until 1730 hours. But Germans were really determined to prevent the 79th to establish a bridgehead as at 2030 hours about two-hundred infantrymen supported by five tanks counterattacked.“ K” Company didn’t have the choice but to withdraw.

During the withdrawal, approximately thirty US soldiers were captured by the enemy. After several hours of fightings, situation became quiet again at 0030 hours.

0630 hours later, Germans resumed their attack with their tanks in lead overrunning the positions of “I” Company, creating a gap in the line as “L” Company’s left flank was unprotected now. Only the use of tanks could stop the German attack, “I” and “B” Companies of the 749th Tank Battalion took over and reestablished the line by 1140 hours.

To prevent any other enemy counterattack, 314th spent the day of the 24th of August in improving its lines of defenses by laying stringing wire and laying mines. This task was interrupted at 1120 hours when Germans attacked the 315th Infantry Regiment. Men of the 1st Battalion seeing this, acted as “Front Observers” by communicating the coordinates to the Artillery so it could know where to fire.

(Note: XV Corps was transferred during this day to the 1st US Army.)

The German counterattack continued again on the 25th of August, Companies outposts were driven back so the decision to clear out the wood was taken at 0850 hours and assigned to the 2nd Battalion. But before to do so, 1st and 3rd Battalions were ordered to have one patrol; ready to reconnoiter the wood to determine if there were any enemy in the woods and if so, what part and whether organized.

As the positions of “B” Company were the ones the most vulnerable, a strength of about a Battalion resumed the counterattack against them at 1630 hours on the 26th.  The enemy was coming from the woods at the East of Guitrancourt, at the same time eight German tanks came out of the woods to attack the 314th lines in the vicinity of the water tower at the East of the village of Les Rues.

All enemy attacks that day were stopped thanks to the support of the Artillery which fired Howitzer shells. Even German officers in trying to gather their men to continue the attack had to give up.

(Note: 1st Battalion suffered a lot of casualties that day because of the heavy fire coming from the tanks and artillery.)

At 2255 hours, it was learned that the 79th Infantry Division will attack North with the objective of taking the line running from coordinates 636675 to coordinates 650662, in an extension of the bridgehead of the XV Corps. This attack was scheduled at 1600 hours on August 27th,1944. After the attack the 30th Infantry Division will take control of the previous positions of the 79th.

(Note: For this attack 3rd Battalion moved to a new assembly area at coordinates 628648.)

The attack jumped as scheduled, but heavy machine gun fire was received by “F” Company at coordinates 635656, one Platoon of tanks was sent out to help them, but by 2150 hours 2nd Battalion was on its objective. 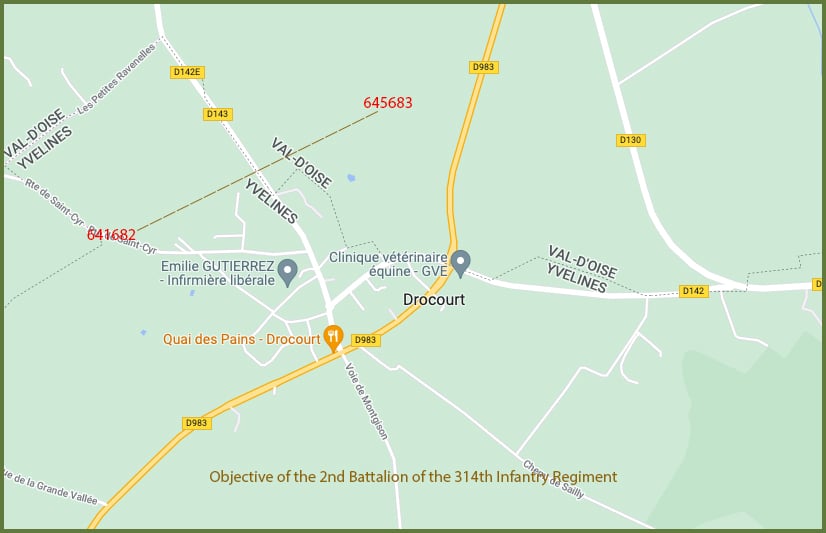 (Note: Nine tanks will support the 3rd Battalion and five the 2nd Battalion.)

Three minutes before the 3rd Battalion jumped, an artillery preparation was laid on the enemy, rapidly 3rd Battalion was on its objective as the 2nd Battalion at 1035 hours. At this moment it was necessary according to the headquarters to wait for the 315th Infantry Regiment but in a burst of courage and revenge, men continued forward, resuming the attack at 1600 hours.

(Note: Officers of the 314th, asked General I.T. Wyche permission to continue its advance and to not wait for the 315th.)

Many German soldiers were taken as prisoners this day.

As German Army was on the run, it was decided that motorized movements were to take place for the 79th passing through villages of Chars, Chavençon to the vicinity of coordinates 8553 between Cresnes and Hénonville.

(Note: All vehicles had to display a yellow panel.)

This movement took place on August 30th, each tank carried ten infantrymen and none resistance was encountered until reaching Hénonville. Indeed, Recon section while driving caught Germans trying to destroy an ammunition dump. Men of the recon section fired on them. A lot of their comrades were spotted in a plain below trying to escape. The Intelligence & Reconnaissance Platoon leader received permission to go after them with his platoon and the tanks.

After a march of approximately 20 miles, foot troops closed in their new assembly area at 1630 hours and the vehicles at 1900 hours.

The march continued on the 31st of August, starting at 0800 hours in the same order. While moving through inland, men could see the wreckage of German vehicles, guns and equipment.

Regiment closed up in a new assembly area in Hermes where Germans left behind them two 150mm guns to defend the bridge, but this didn’t help as Intelligence & Reconnaissance Platoon took care of it easily.

At this time men of the 314th as the entire 79th Infantry Division were passing through the battlefields of First World War were their grandfathers fought the German Empire and closed in the village of Wavignies.