Old Reliables taking Cherbourg from the West of the Cotentin Peninsula

Outskirts of Cherbourg - The attack on Equeurdreville-Hainneville

On the 24th of June 1944, “E” Company of the 2nd Battalion of the 47th Infantry Regiment commanded by Captain William Larson was hidden behind a hedgerow running East from the crossroad coordinates 105239 in front of the main road.

Behind the road? The German positions! 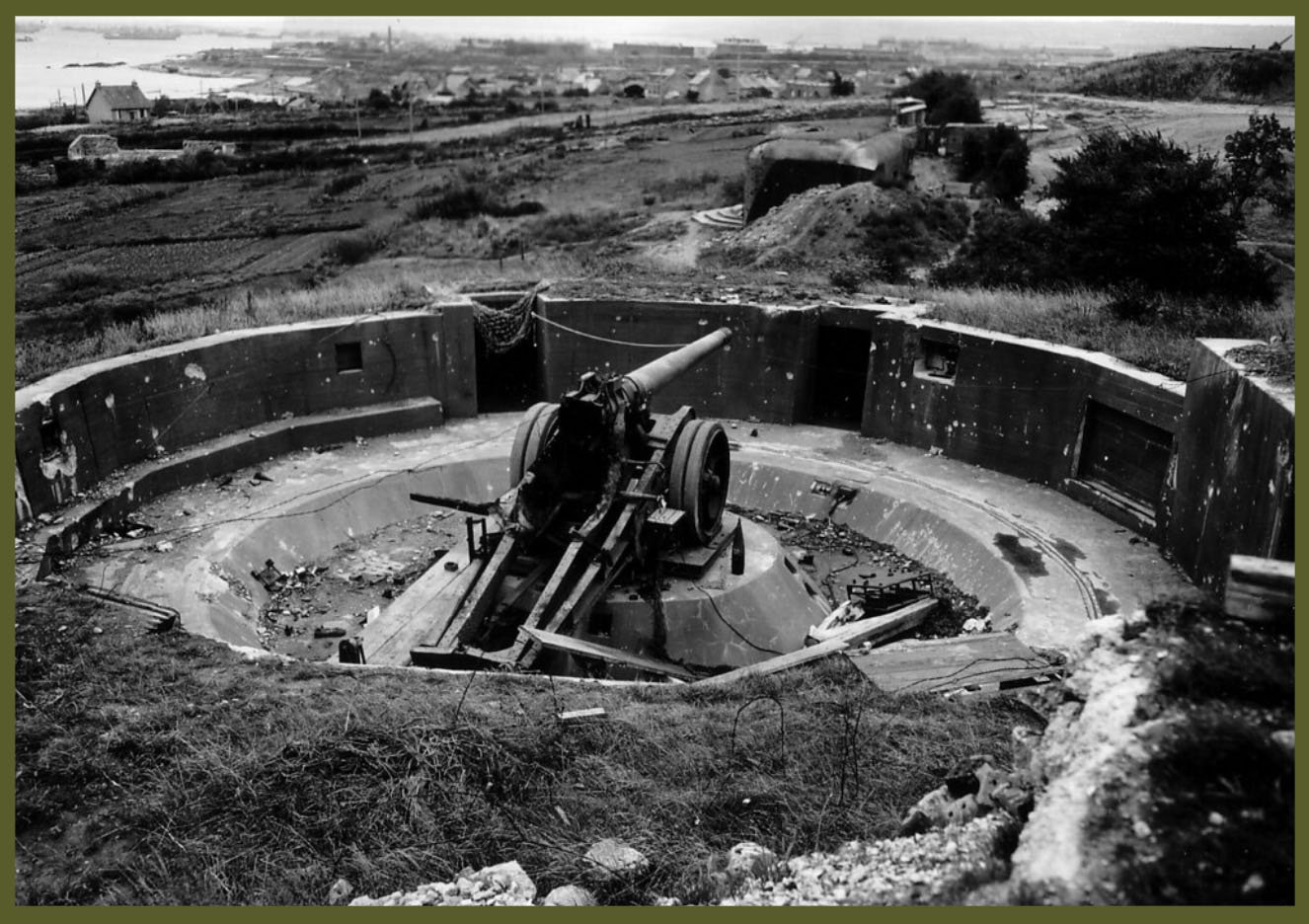 Their mission? Capture the Fort of Equeurdreville-Hainneville also known as "Fort des Couplets"  and the fortifications at coordinates at 113234.

On the 25th of June 1944,  at 08:00 hours, Major Woodrow Bailey, Battalion CO and Captain Larson made a run to the frontlines, discovering the area all around them was mined and defended by the Germans.

This area separated them from the Fort, a distance of 500 yards. The fort provided a high ground position overlooking the whole harbor area, it was defended by a dry moat, barbed wire and tunnels could be seen reaching the coastal gun emplacements.

At 10:45 hours, P47's flew over the men of the 2nd Battalion and provided a bombardment on the fort area, then one tank destroyer took over in shelling and machine gunning the mined area.

11:00 hours H- Hour, “E” Company  went into action, by crossing the road and down onto the draw. Captain Larson ordered a mortar barrage by radio every 100 yards ahead of “E” Company . This attack was prepared as follows:

Only 15 minutes after the attack started men of the 2nd Platoon reached the bridge, throwing grenades over the gate. Sergeant Edward Blucas destroyed the gate, opened it and met a German with his machine gun who was waiting for him!

Sergeant Blucas threw another grenade hitting the German soldier in the head.

At 11:30 hours the rest of the platoon followed, and 69 German prisoners of war were made.

Fort des Couplets had fallen easily because the Germans had retreated due to the P47's dive American bombing and deadly strafing.

In the meantime, the 1st Platoon had passed Fort des Couplets on the right and consolidated a line running to the East while the 3rd Platoon did the same thing on the left.

While “E” Company  was assaulting Fort des Couples of Equeurdreville-Hainneville, “F” Company with Lieutenant John Booth was advancing and reached a strongpoint at coordinates 113235 meeting only sniper fire, taking 18 prisoners of war.

Note: In the school of Equeurdreville, the French resistance was in charge to guard more or less 70 German prisoners who had been willing to surrender.

After the fall of Fort des Couplets, the 2nd Battalion continued its advance in the streets of the city by cutting the main avenue.

By nightfall men returned to the City Hall corner to take some rest.

During the next few days, the 2nd Battalion was ordered to clean out the houses, the buildings, all the way to the coastal positions protected in their mission by 3 tanks and 2 tank destroyers.

The coastal area was mined to the West and North. The remaining Germans were using the houses as an Observation Point for the guns, so the tanks went into action in destroying the 20 mm guns. Once all gun positions were out of action, 91 Germans surrendered.

Note: The French resistance helped the Americans by giving them the positions of the German Observation Points and gun emplacements. 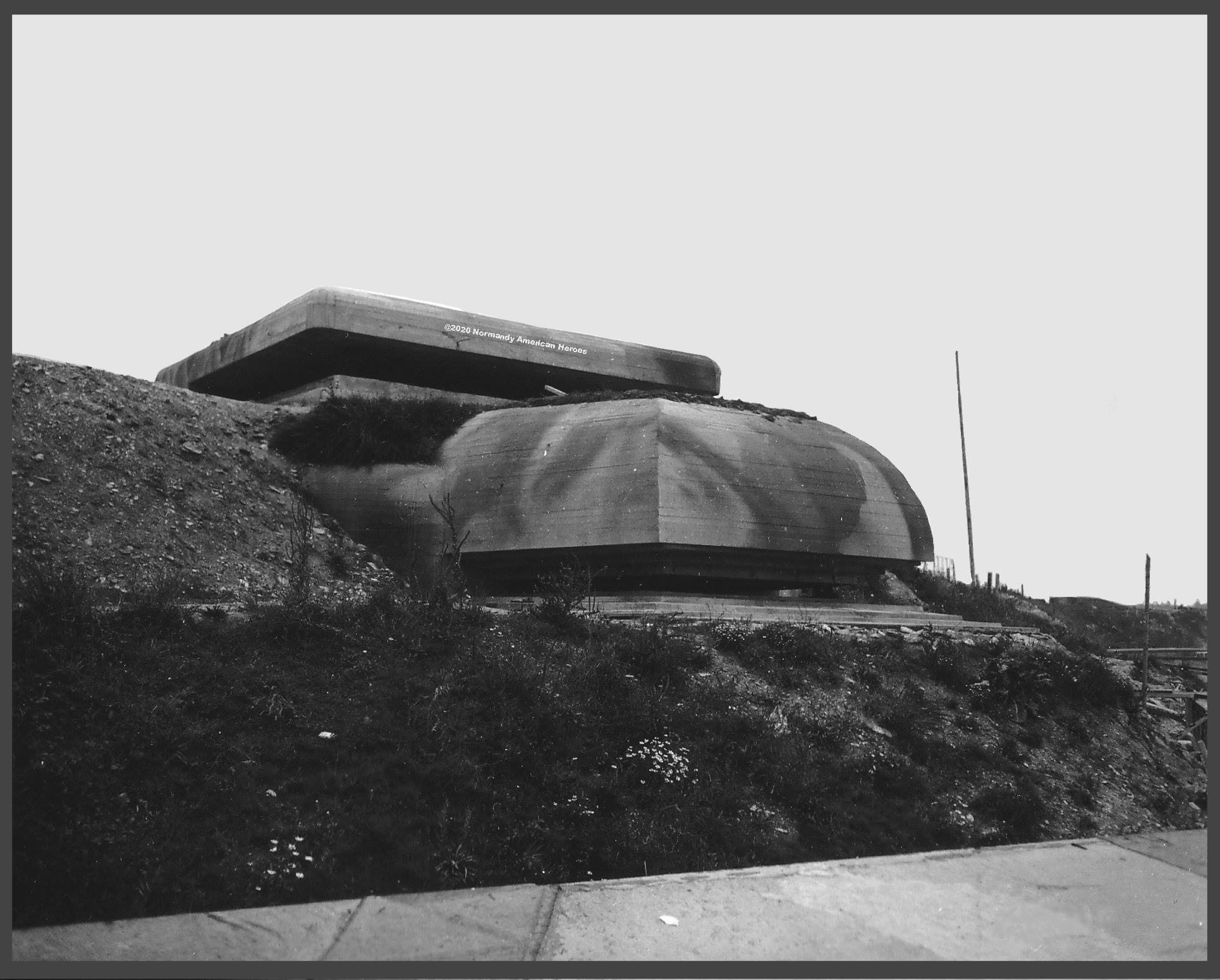 Entry into Cherbourg – The taking of the Arsenal

On the 25th of June, after reaching the Rue du Tôt Neuf, the 1st Battalion went to the church meeting small arms fire. Then the battalion turned right on the Avenue du Chevreuil, men were taking position on the street but didn’t advance further due to the lack of light.

The following days, the 1st Battalion was assigned the mission to reach Rue Gambetta and to clear the South of that street near the Naval Hospital and the stadium.

To do so,  "C" Company headed off to Rue Vautrain (AAR report spelling - the street name has changed since) and Rue des Maçons while Company “A” was clearing the Hospital area. Meanwhile Company “B” was attached to the 3rd Battalion.

The 1st Platoon commanded by Technical Sergeant Taylor made its way up to Rue Nervet (AAR report spelling - the street name has changed since), then turned right on Rue Pasteur and pushed forward to Rue Victor Hugo followed by the 2nd Platoon.

Each platoon was given a 60 mm mortar and one light machine gun. Two tanks were at the disposal of Company “A”.

The advance across the streets was an easy one, men met only isolated sniper and rifle fire.

Captain Hilpert, S-3 of the 9th Infantry Division then CO of Company “A” of the 47th Infantry Regiment, sent one tank in support of the 3rd Platoon at Rue de la Bucaille but was knocked out at the corner of Rue des Moutons by an anti-tank gun.

In the meantime, Captain Hilpert took position in a house at the South of the stadium, establishing his CP. As it was late afternoon, all companies were ordered to dig in for the night and to hold the ground gained during the day.

During the night, men were ordered to prepare pole and satchel charges in preparation of their last objective.

The American artillery shelled the Arsenal, the last remaining strongpoint still between the hands of the Germans.

Concrete emplacement for mobile 150mm gun used by the Germans in their coastal defenses at Equeurdreville, France

Captain Hilpert with Staff Sergeant Herwig commander of the 2nd Platoon were together in battle. They decided to make a foray to see where the enemy was and to determine its strength in fighting.

The 2nd Platoon had, as support, a light machine gun, one 60 mm mortar which was to be used to send up a red flare as a signal for the 81 mm mortar to fire smoke if a withdrawal was deemed necessary, and one tank in the rear.

During the advance, the platoon received small arms fire crossing the railroad tracks.

Two 200 mm guns were spotted and the tank commander was ordered to knock them out. Once the guns were out of action, Captain Hilpert and his little squad withdrew; the assault could start.

What the American didn’t except was the surrender of the Germans, the fire provided by the tanks, mortars, artillery and the bravery of the men forced the Germans to surrender.

While Captain Hilpert was ready to withdraw, a white flag appeared on one of the windows. As Captain Hilpert didn’t know what to do, he contacted Colonel George W. Smythe, the Regimental Commander to ask him what he had to do. Finally Captain Hilpert turned the 2nd Platoon around toward the Arsenal, entered it, and received the surrender of the German garrison.

Lieutenant Dougherty from the 4th Platoon who accompanied Captain Hilpert during this action, marched 800 prisoners out of the Arsenal, and the 1st Platoon of Company “B” was appointed as guard of the prisoners.

Only Major General Robert Sattler who was commanding the Arsenal still hiding in the rear, refused to surrender and to deal with Colonel Smythe.

It required a show of force before he would surrender to General Manton Sprague Eddy.