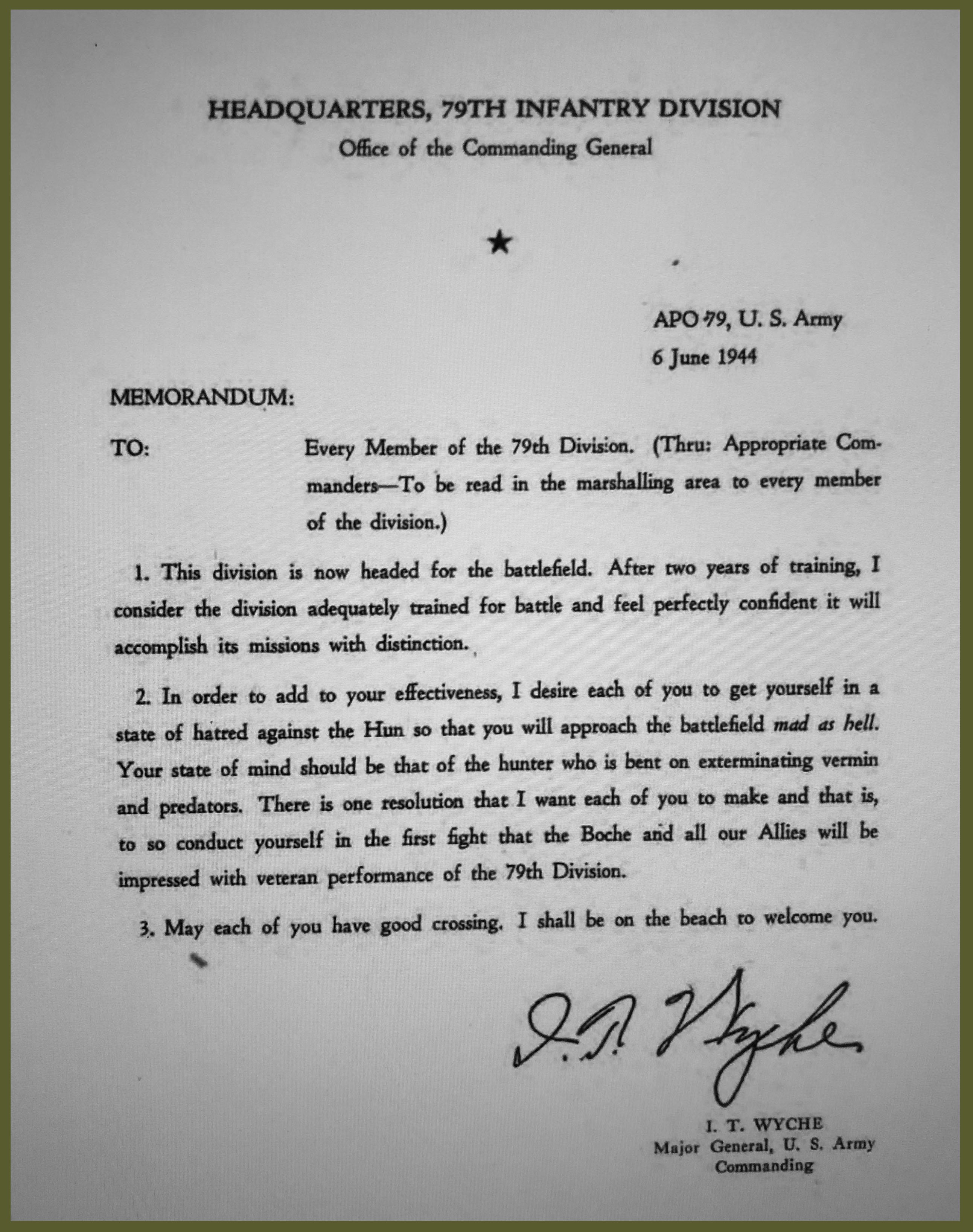 It was on the 1st of June 1944 when the 79th Reconnaissance Troop left Marbury Hall Tent Camp N°2 in England to “Galloping Bottom” in preparation for the great invasion.

There, vehicles were waterproofed, and all the necessary preparations for an overseas movement were attended to.

On the 12th of June 1944, elements of the 79th Reconnaissance Troops reached their marshalling area, the first mission of the men was to wait anxiously before the great departure scheduled on the 16th of June. On this date, elements were loaded into the landings crafts (LCT). Destination? Utah Beach.

On the soil of France, elements of the 79th Reconnaissance Troop were not committed into action once disembarked. As soon as all men came ashore, the troops were ordered to move in the vicinity of Picauville to bivouac.

It was only three days later, on the 19th of June 1944 that the men faced the enemy fire. 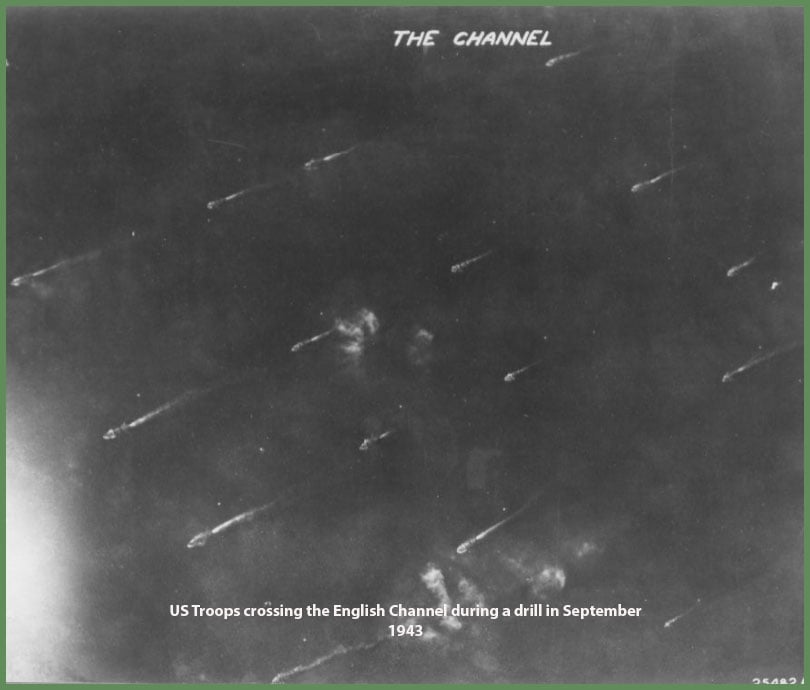 The 79th Reconnaissance Troops were part of the 79th Infantry Division. As all troops which disembarked on Utah Beach their main mission was to capture the Cotentin Peninsula and to hold Cherbourg, the only city of the peninsula with an harbor in deep water.

On June, 19th 1944, only the 3rd and 2nd Platoon were committed into action, the 1st Platoon was in reserve at the Command Post.

The 3rd Platoon of the 79th Reconnaissance Troop was assigned the mission to protect the left flank of the 313th Infantry Regiment of the 79th Infantry Division.

How so? Men decided to reconnoiter German strongpoints and the North of the village of Négreville (D-146). 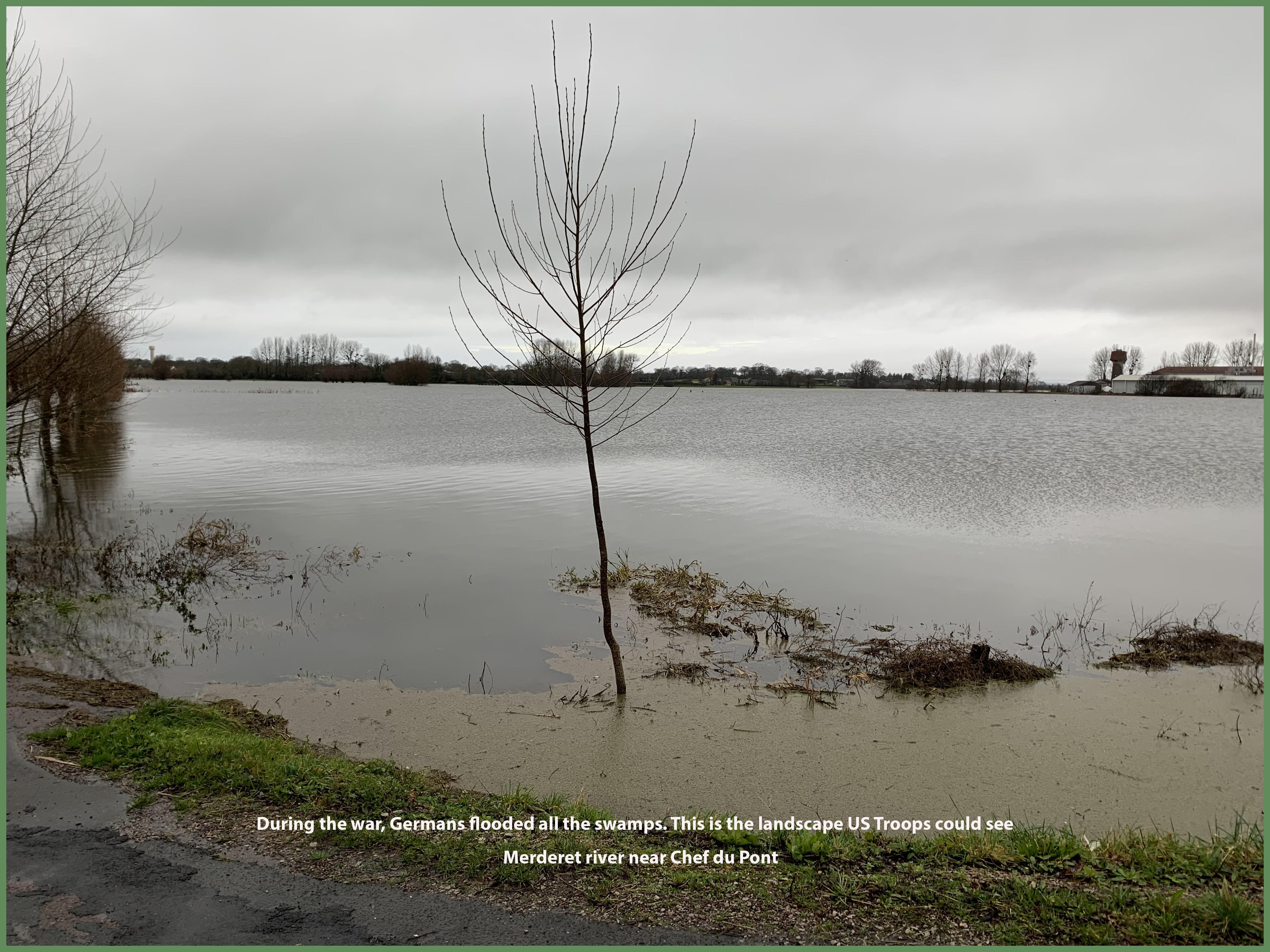 The next day, elements of the 3rd Platoon continued to reconnoiter in the North and West approximately five miles, then across the front of the Infantry toward the village of Brix (D-50).

Men used the cover from the cratered roads leading North to fulfil their mission during the afternoon still under sniper fire. After reaching the village of Brix, the 1st Platoon was brought onto frontlines to relieve their band of brothers of the 3rd.

There elements of the 1st contacted the forward troops of the 314th Infantry Regiment of the 79th Infantry Division to know where exactly were their positions, to accomplish a better reconnaissance on the left flank.

After leaving the village of Brix, the 1st Platoon found itself under German artillery fire, the enemy turned the “Chateau de la Cour” located at the West of the city of Tollevast (D-152) into an artillery strongpoint supported by rocket guns and fortified pillboxes.

From the afternoon of the 20th to the 22nd of June, troops were under heavy fire and had to hold their positions. 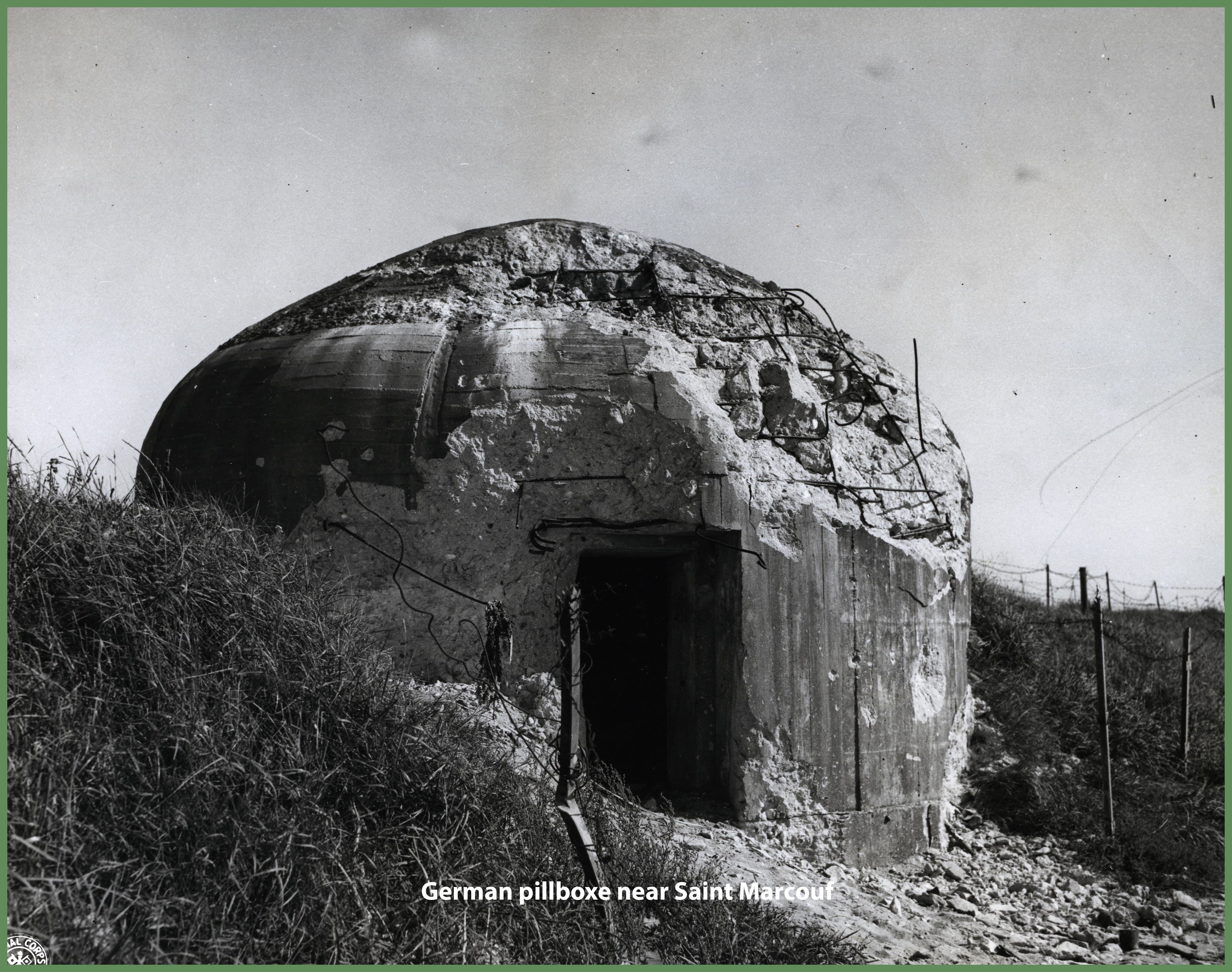 After reconnoitering the city of Golleville (D-256) on the 21st of June, the 2nd Platoon was ordered to protect the right flank of the 79th Infantry Division, relieving the 1st Battalion of the 315th Infantry Regiment then to push to Valognes. To their great surprise, Germans had left the town, finding no enemy, men withdrew to the Command Post.

After two days of heavy shelling, the 3rd Platoon was assigned to the left flank of the 315th Infantry Regiment at the hamlet of Le Bourg Neuf (D-56), southwest of the city of Tollevast while the 2nd Platoon was in charge of guarding the German pillboxes along the road leading from Le Bourg Neuf to Saint-Martin-le-Gréard (D-56).

Against all odds, men of the 3rd Platoon succeeded in getting behind the German lines through the 90th Infantry Division’s area on the 23rd of June and patrolled the area from the city of Martinvast (D-122) to Hardinvast (D-119).

The 1st Platoon who had the mission to relieve the 3rd Platoon, was held at the South of Saint-Martin-le-Gréard by a roadblock composed of a steel gate, covered by artillery, mortar and machine gun fire supported by riflemen. This enemy fire from different caliber forced the men to withdraw. In the meantime, the 2nd Platoon reconnoitered the road and railroad in their area but found no enemy, they then returned to their Command Post.

During the afternoon of the 24th of June, the 3rd Platoon was on a motor patrol, they encountered a group of German soldiers; two were killed, one was wounded and nine were taken as  prisoners of war.

The 1st Platoon who found itself blocked by the roadblock on the previous day, made an attempt to bypass again but without success. It was too fortified. Men were recalled to return to their Command Post to move on, East and North toward Cherbourg. 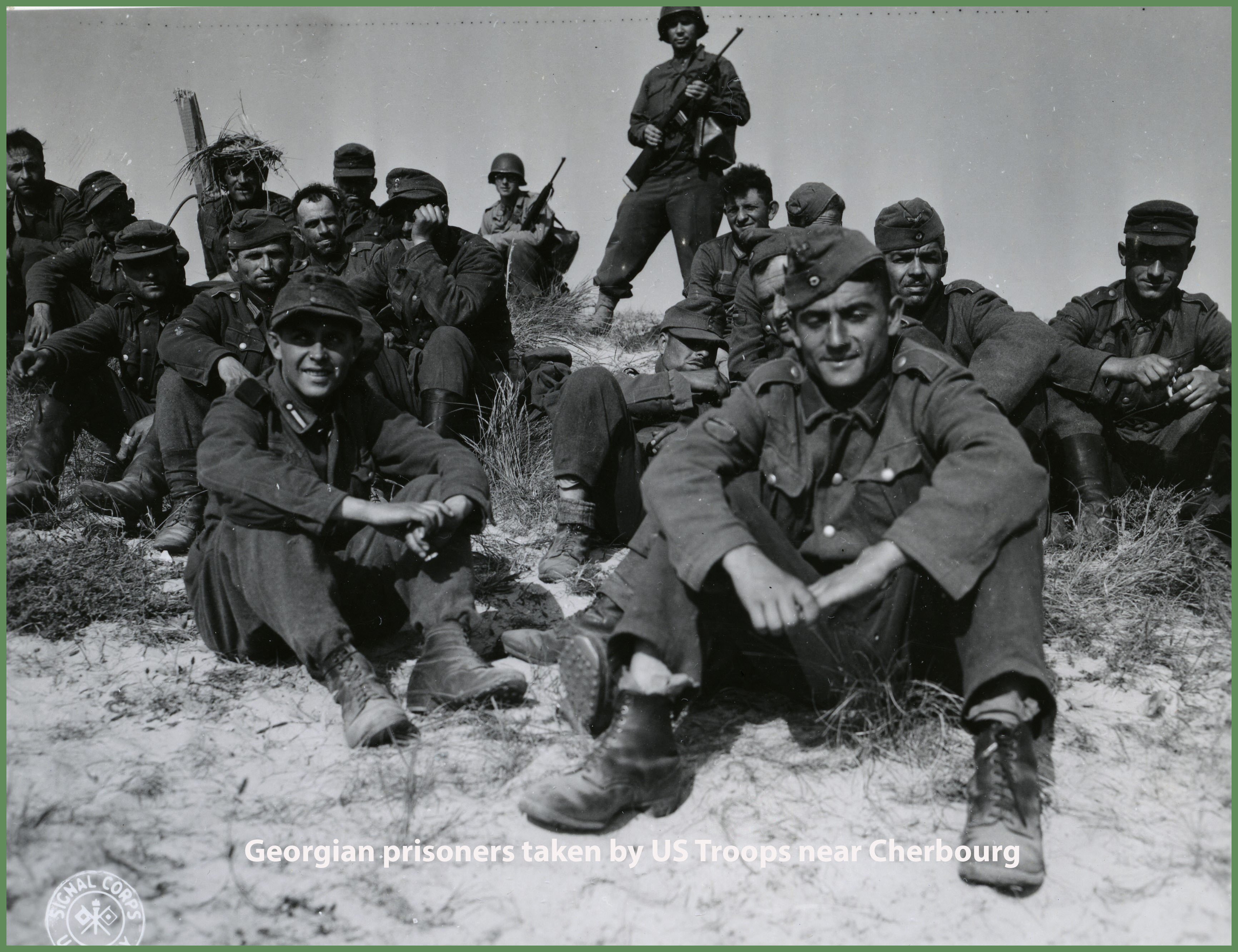 Technical 5 Nortfleet was the first casualty encountered by the 79th Reconnaissance Troop since their commitment into action on the 19th of June.

On the 25th of June, Technical 5 Nortfleet, Armored Carrier Driver from the 2nd Platoon was badly wounded by small arms fire in the vicinity of Tollevast while on a dismounted patrol. Sergeant Thomas commander of his patrol, managed to evacuate him under heavy enemy fire. For this action and act of gallantry Sergeant Thomas was awarded the Silver Star.

On the same day, the 3rd Platoon was mopping up the city of Tollevast, the 3rd section was committed to work with elements of the 9th Infantry Division and the other sections to reconnoiter the city of Hardinvast. Sections succeeded to advance one mile before meeting an enemy roadblock supported by small arms fire. This enemy position was reported and men withdrew to the Command Post. During a mopping up mission on the 315th Infantry Regiment’s left flank, three German soldiers were killed, one was wounded and seventeen were captured.

German soldiers taken as prisoners of war were interrogated, one of them gave the Americans additional information which made possible the capture of forty more enemy soldiers.

On their final drive on Cherbourg, the 1st Platoon was ordered to protect the right flank of the 314th Infantry Regiment, it accomplished its mission under constant artillery, mortar and small arms fire.

On the 26th of June the 2nd Platoon and half of the 1st Platoon were recalled to the Command Post to bivouac while the remaining troops participated to the heroic march into Cherbourg.

After 8 days of intense fighting, the 79th Reconnaissance Troops enjoyed a short period of rest from the 27th of June to the 2nd of July, receiving their first replacements near Saint Jacques de Néhou. 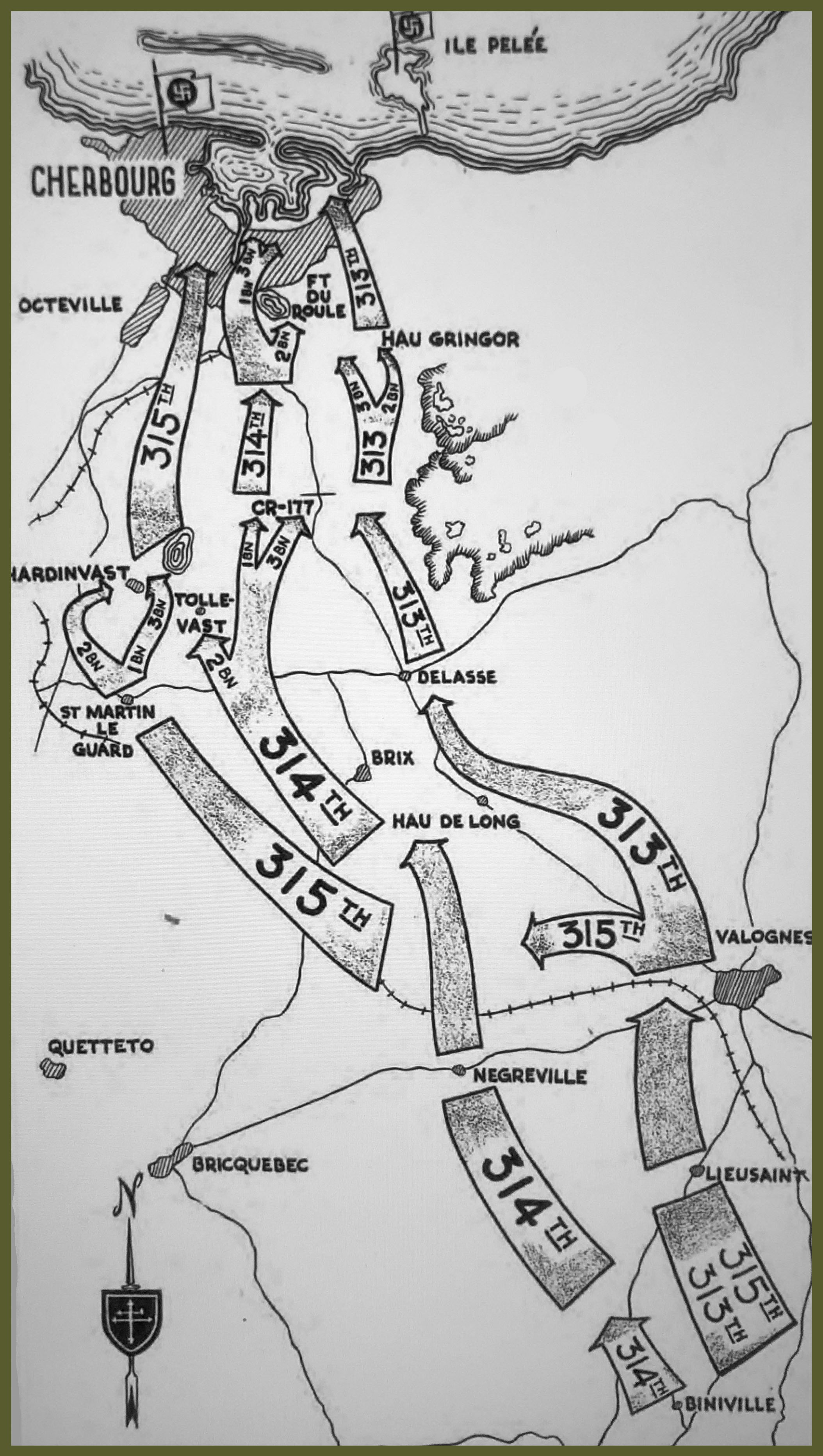