Before talking of what the soldiers accomplished during combat, we propose you to discover the different commanders.

This regiment was commanded by Colonel Warren A. Robinson,

To lead men into battle, Headquarter needed to be able to count on experienced men.

Before embarking in this noble undertaking, the 314th Infantry Regiment was stationed near Southampton in scattered staging areas. Soldiers embarked by small units onboard  various types of landing crafts and liberty ships. 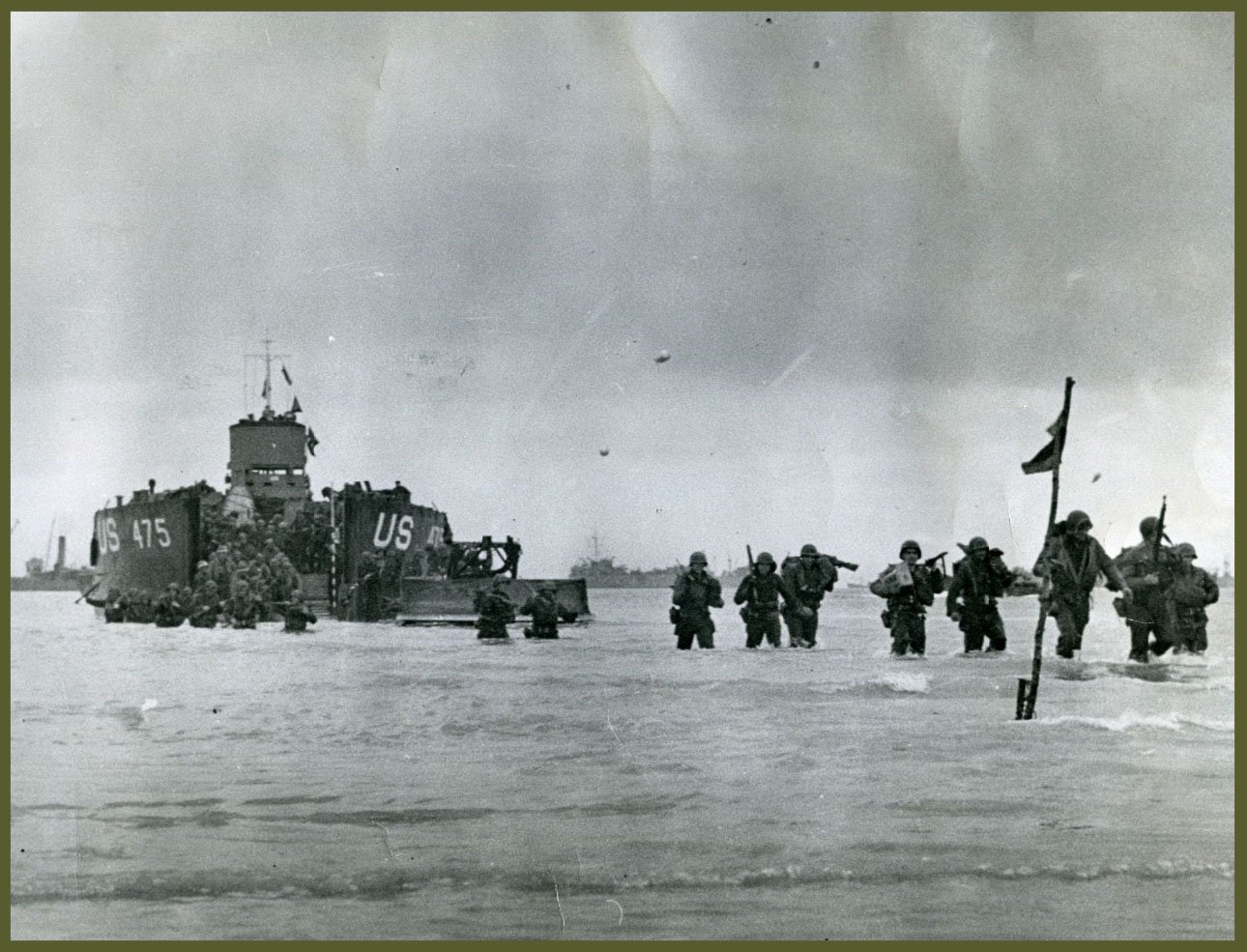 The first men of the Regiment to land on Utah Beach was the Regimental Headquarters on the 14th of June at 2130 hours. It had left England on the previous day at 2000 hours.

The rest of the Regiment arrived during the following days. Once all the men had set up foot on the soil of France, the 314th Infantry Regiment moved in the vicinity of crossroads #33 North of Blosville, precisely at coordinates 362934.

At midnight on the 16th of June 1944, 1st and 2nd Battalion had joined their assembly area. For the next days the rest of the Regiment continued to disembark their vehicles, and equipment.

Preparing a landing is not an easy task, thousands of men left England onboard various ships, logistic was the heart of this undertaking but sometimes, when thousands of men arrived from the other side of the English Channel on small beaches as the ones in Normandy, landing mistakes can happen.

The Antitank Company of the 314th Infantry Regiment unloaded not on Utah Beach but inadvertently on Omaha Beach some thirty miles at the West! It was Captain Edward J. Gorecki who informed the Regimental Headquarters of this mistake.

The period of concentration was spent to dewater proofing the vehicles, weapons, preparing and checking maps, and preparation for combat.

June 18th, 1944, the 314th Infantry Regiment was ordered to move in the vicinity of Picauville at coordinates 2972943. The first troops to leave the assembly area were gone by 1300 hours and by 1815 hours all units were in their new assembly area.

While the Regiment was moving to its new assembly area, the Regimental Commander was ordered to come to a meeting at the Division Headquarters to take orders, an attack being scheduled on the 19th of June placing the 314th Infantry Regiment in reserve, at the south of Biniville, coordinates 243982.

When Colonel Robinson came back, he informed the Battalion Commanders, the Staff Commanders of the situation, and all of them started to discuss of the plan. How to proceed? Which are our strengths and weaknesses and the ones of the enemy?

The Colonel issued an order to move to a new assembly area and by 0430 hours on June 19th all troops had moved there. The men were placed on a 2-hour alert at 1200 hours, finally at 1900 hours an order from Division Headquarters was received, the 314th Infantry Regiment was about to enter into action.

The 2nd Battalion men were loaded on trucks to bring them into position and at 2100 hours, they were dropped at crossroads coordinates 196067 where they didn’t wait any second before firing their first bullets. Men went into action by launching an attack on the ridge of La Croix Jacob (D-146).

The 1st and 3rd Battalions were driven to their new assembly area. The 1st at coordinates 207070, the 3rd at the North of Négreville while the Regimental CP was set up at coordinates 192056 by 2344 hours.

Seven hours later, at 0415 hours the 2nd Battalion had reached La Croix Jacob, its CP was established at coordinates 187067.

The 20th of June 1944 marked the first day in which the three Battalions of the 314th Infantry Regiment went into action together.

In the early hours of the day, precisely at 0715 hours men of the 1st Battalion secured the road junction #57 coordinates 196083, one hour later, men reached the outskirts of Hameau És Long (N-13). The 3rd Battalion was right behind it. 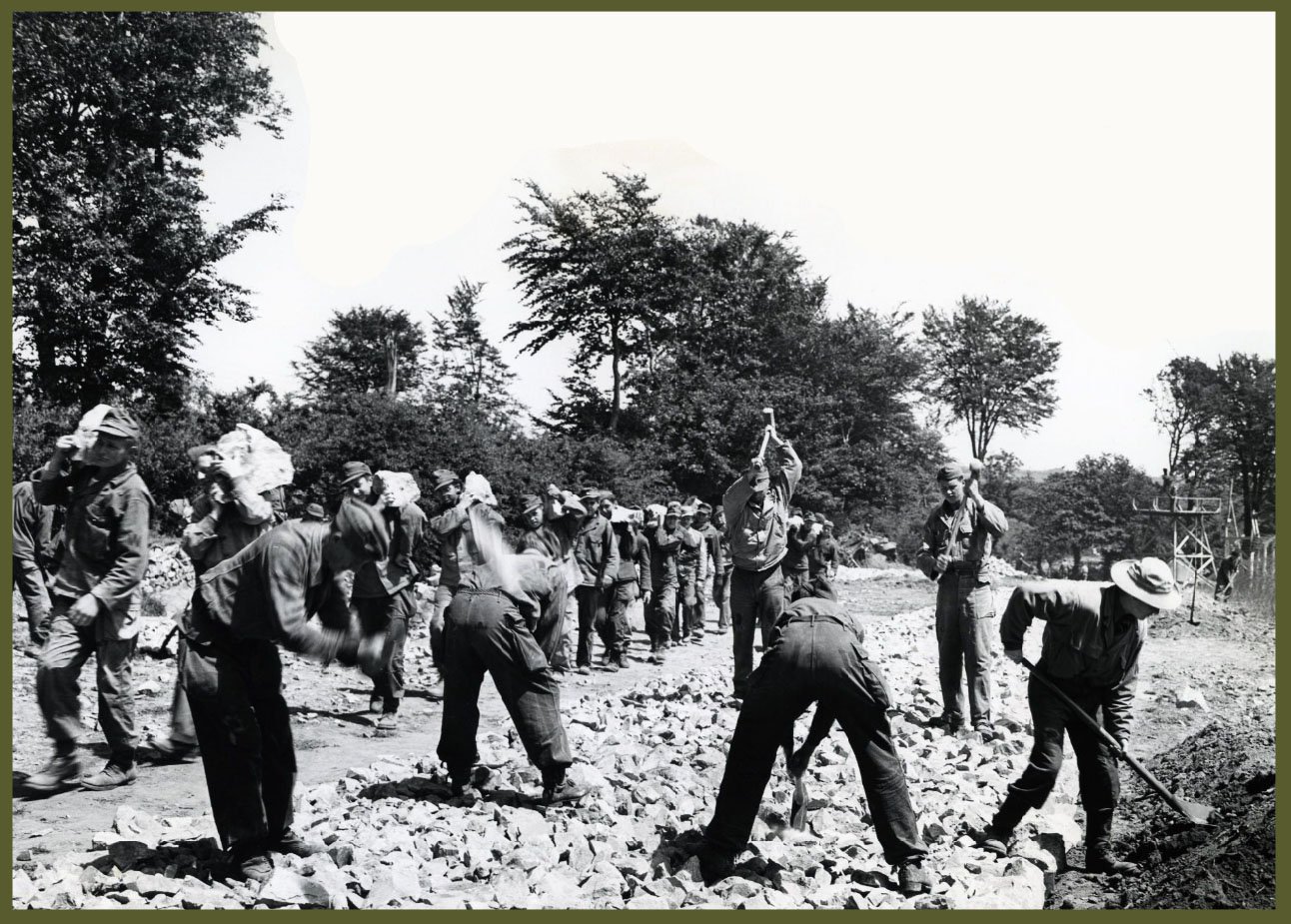 For their first day into battle together the three Battalions captured prisoners of war, gun emplacements but also saved some other US soldiers: 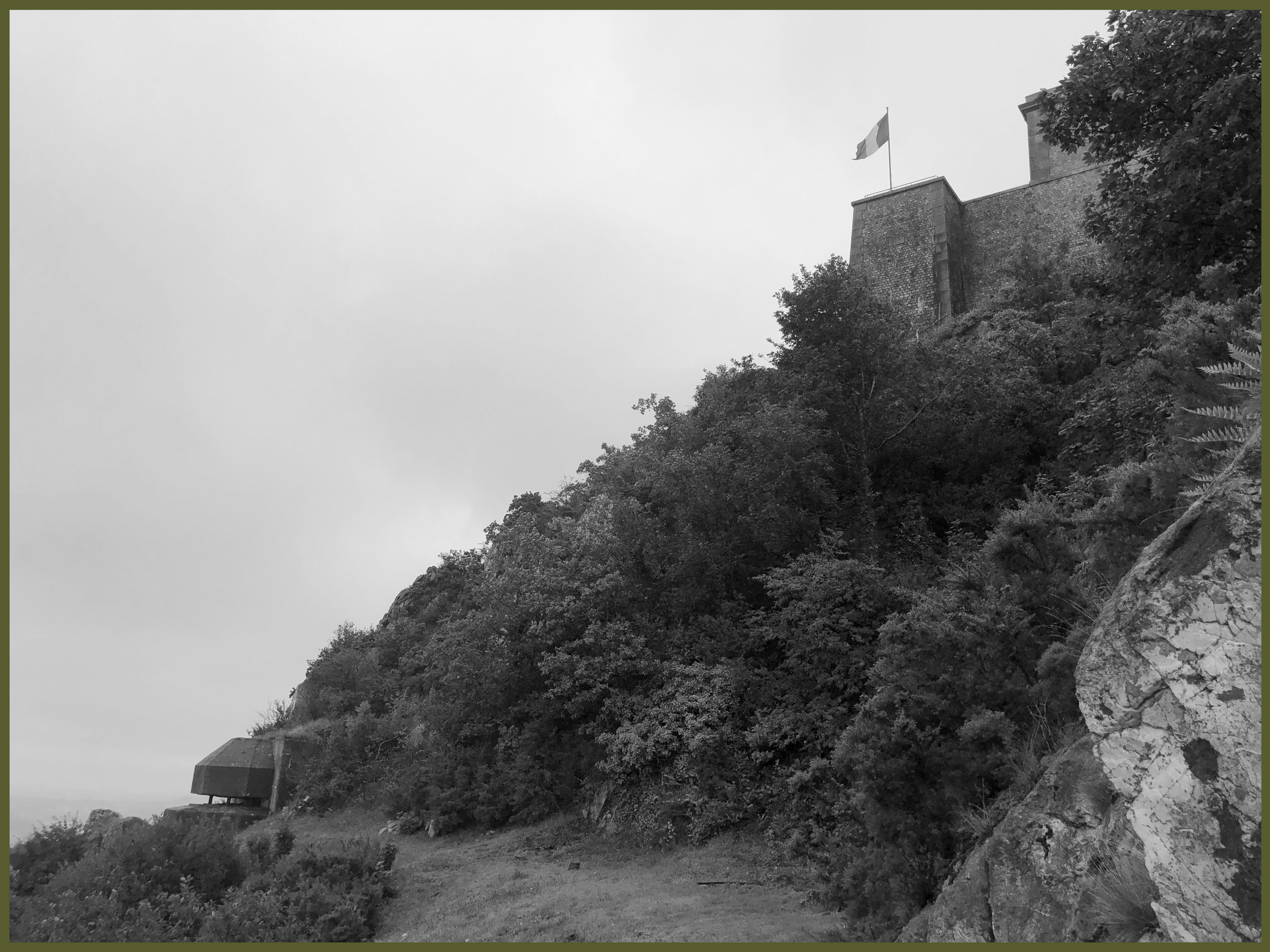 From these new positions the Regiment could see the outer defenses of Fortress Cherbourg. To reconnoiter, active patrols were sent that night and on June 21st.

Patrol’s reports taught the Regiment that well-fortified positions were ahead of the men with guns. The German artillery opened fire on the men of the 2nd Battalion who were in their assembly area causing many casualties.

This enemy fire forced Colonel Robinson to assemble all Officers to talk about the situation on the frontlines and to order every man of the Regiment to be on alert.

The Colonel told them they were under the fire of the main Cherbourg’s defenses, and that an attack was going to take place on the 22nd of June between noon and 1600 hours after an air bombardment. All men were ordered to withdraw 1200 yards so as not to be under friendly fire. Vehicles were also withdrawn 500 yards to avoid being destroyed by  German artillery.

Air bombardment started at 1300 hours, but bombs were falling behind the Regiment’s frontlines, worse US planes were machine gunning men of the Regiment! This friendly fire caused casualties among the ranks of the 3rd Battalion, five men were hit and one truck destroyed.

The attack jumped off at 1400 hours with the men of the 2nd Battalion, “B” Company was running into a fortified area at coordinates 144169 while “C” Company was moving into a field at the left through Tollevast.

The German artillery was one US soldier worst nightmare! While “C” Company was fighting in Tollevast, enemy artillery was falling on them disorganizing the Company. The 3rd Battalion was working with one Battalion of the 313th Infantry Regiment, both of them had the East West road as objective through the road junction coordinates 15181.

Additional order was received telling the 1st Battalion to disengage to support the 3rd Battalion, but “A”, “B” and “C” Companies were not able to follow due to the heavy enemy fire.

The 2nd Battalion was given the mission to clear the inland roads leading the 3rd Battalion by passing through the road junction coordinates 154151166.

In the meantime, men of the 3rd Battalion of Headquarters Company commanded by Major Henri F. Koch and Captain Theodore M. West silenced out the strongpoints #9 at coordinates 144169.

The 3rd Battalion of the 314th Infantry Regiment launched its attack at 1100 hours, its objective? The german strongpoints #33 precisely at coordinates 153197. “I” Company found itself under the German artillery and was forced to withdraw due to the casualties. The 1st Battalion advanced up to Hill 33 but an air bombardment was scheduled on the 24th of June: all companies of the 1st Battalion, except “A” Company, withdrew.

Each Battalion had a specific objective on the third day of the attack:

This attack was a huge success, 2nd and 3rd Battalions succeeded in taking their objective approximately one hour and half later: strongpoint #33 fell at 1000 hours and strongpoint #34 at 0943 hours.

Then things got worst! As the troops were not far away from Cherbourg, the 3rd Battalion tried three times to seize the high ground outside of Fort du Roule, constant machine gun, and artillery fire made the action impossible.

At 2300 hours Major Hillier went toward the 2nd Battalion's Commander telling him how the attack was to take place.

The last stand… of the Fortress Cherbourg!

The order for the final attack was received at 2205 hours in the evening of June 24th.

It's for tomorrow, tomorrow will be the beginning of the end of the German oppression on the city.

“F” Company captured the lower position of the fort finding a motor pool and a large amount of enemy material, then started to walk toward Fort du Roule. In the meantime, “E” Company in conjunction with “F” Company was ordered to attack Fort du Roule.

At 1145 hours, a German came out from his dug in emplacement in the fort waving a white flag, making possible the capture of around 105 prisoners of war in the lower part of the fort. Men were frustrated, despite the taking of hundreds prisoners they were not able to continue their attack due to the heavy fire from higher machine gun nests and from the valley. As enemy fire was also coming from the valley, the 3rd Battalion received the order to silenced all German positions which could prevent the 2nd Battalion to seize Fort du Roule.

The 2nd Battalion tried all day to seize the Fort without success, it will be only at 0048 hours on the 26th of June 1944, when white flags appeared to windows, that the remaining Germans abandoned the fort in the American hands. 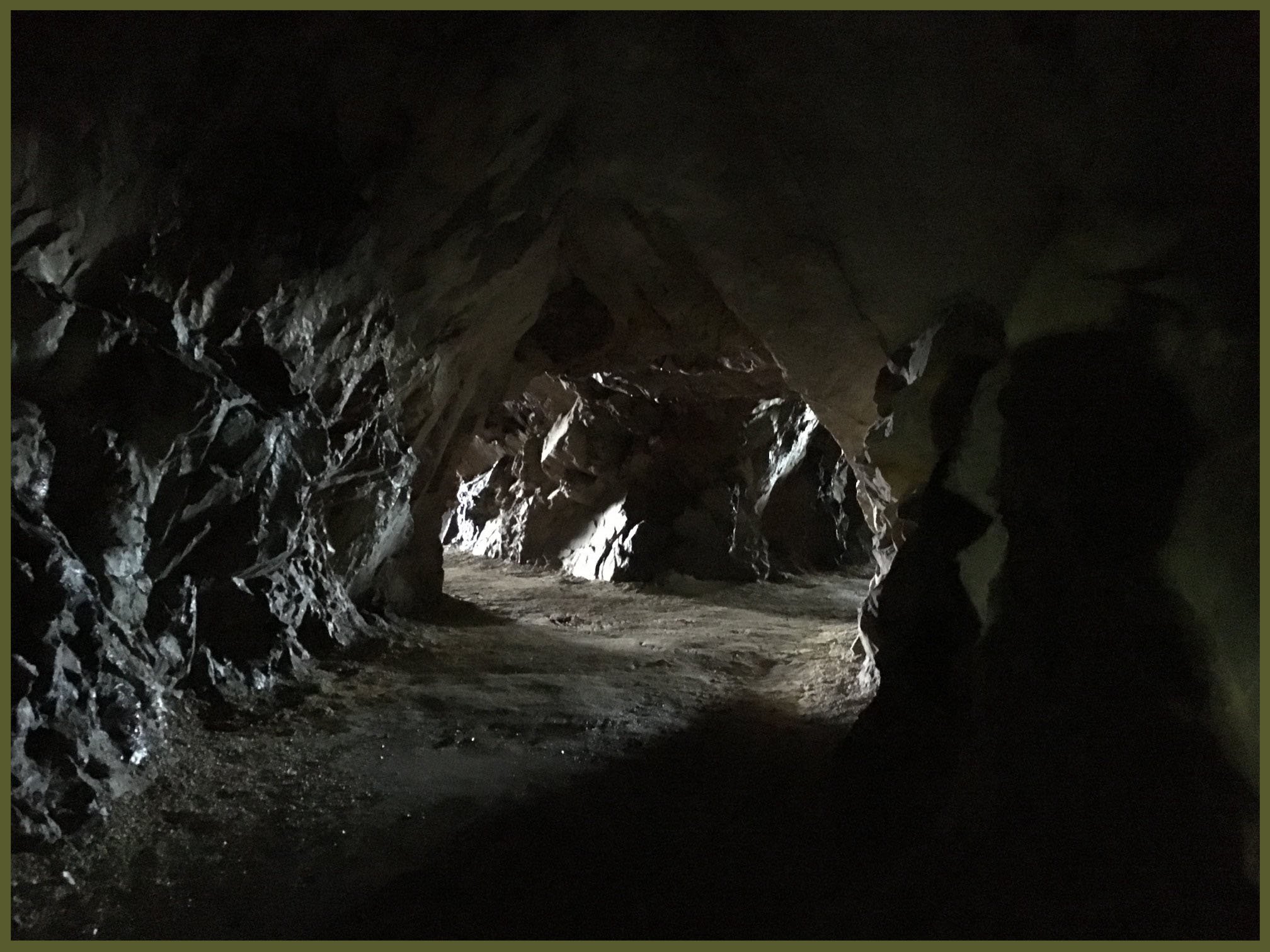 During the night the Battalion, after a day of hard fighting, bivouacked on top of the Fort. The 1st Battalion succeeded in taking its objective, and worked patrols into the outskirts of Cherbourg while the 3rd Battalion was sent off into assembly area.

The taking of Fort du Roule was only the first step to the fall of Fortress Cherbourg for the men of the 314th Infantry Regiment!

In the early hours of what was the last day of the German presence in Cherbourg, the 1st and 3rd Battalions attacked directly through the central part of the city.

The 2nd Battalion was given the mission to defend Fort du Roule, points N° 45 and 46 but also to silence the guns which were on the lower position of the fort. It will be only by the end of the afternoon, after several hours of street fightings, at 1730 hours that the harbor area, which was the Regimental objective, was freed.

But the mission was not finished for all of them, the 2nd Battalion was still attacking the guns on the lower positions of the fort and so until 1900 hours. Altogether, around 500 prisoners of war were taken at Fort du Roule.

On the 27th of June 1944, the 314th Infantry Regiment made contact with the 4th Infantry Division which took over the prisoners of war made by the Regiment.

After the Cherbourg Campaign, the 314th Infantry Regiment moved to a new assembly area South of Bricquebec (D-902).

Since D-Day, the 87th Chemical Mortar Battalion was attached to the Infantry Divisions but also to the Paratrooper Divisions. It participated in the liberation of Carentan-les-Marais by providing fire support for the men of the 101st Airborne Division, but also in the capture of the Cotentin Peninsula working with the three Infantry Divisions which liberated the Fortress of Cherbourg: the 9th, the 4th and the 79th Infantry Divisions.