313th Infantry Regiment rendez vous at the Fortress of Cherbourg!

Once every man of the 313th Infantry Regiment were disembarked from the LCT, they all started to march to their assembly area to Sébeville, a distance approximately 15 miles where the motor elements joined them.

The Regiment remained in its assembly area until the 16th of June while the rest of the Division was landing. They then moved to the vicinity of Picauville at Pont l’Abbé (D-70) in the VII Corps Reserve.

“A” Company of the 304th Medical Battalion

“A” Company of the 304th Engineer Battalion

“A” Company of the 746th Tank Battalion

“A” Company of the 82nd Chemical Mortar Battalion.

The attack jumped off exactly at 0500 hours from the vicinity of Golleville – Biniville with the 1st and 3rd Battalions in the lead (1st on the left and 3rd on the right. 2nd was in reserve), the objective was the high ground in the vicinity of Bois de la Brique (D-62) located at 2,48 miles West of the city of Valognes.

Only the 1st Battalion reached the objective where it was joined by “A” Company of the 746th Tank Battalion around 1400 hours, then started to dig in defensive positions should the Germans decide to counterattack. The 3rd Battalion was held up by a heavy German resistance at 0,62 mile of its objective.

Around 1800 hours, the Division Headquarters decided to use the 2nd Battalion which was still in reserve to support the attack of the 315th Infantry Regiment.

Other directives were received to change the direction of the attack. The new plan of attack was now along the boundary between the 313th and 315th Infantry Regiments to the southern slope of Hill 79. The three Battalions of the 313th Infantry Regiment remained in Bois de la Brique during the night of the 19th to the 20th of June.

In the early hours of the 20th of June, the attack was resumed but the Germans destroyed a bridge about 1 miles North of Bois de la Brique delaying the advance of the Motor elements.

The elements of the 313th Infantry Regiment passed by Valognes – Cherbourg highway at the northwest of the village of Saint Joseph, then followed the road onto Cherbourg. Passing through the village of Saint Thomas, the 2nd Battalion received enemy artillery fire and machine gun fire. Men decided to deploy to attack the German positions as the enemy fire was too heavy. The advance was again held up near the crossroads coded 150. The Regiment came under artillery fire coming from fortified positions at the crossroad coded 148.

On the 22nd of June, the Regiment resumed its attack on the German fortified positions which had held them for now two long days. At 1400 hours elements were withdrawn 1000 yards South so the bombers could drop their bombs safely without causing friendly fire.

The need to reorganize the battalions soon arose as the 3rd Battalion was headed East and the 1st Battalion North!

Once Battalions were reorganized, the 1st Battalion took position on the right of the road Cherbourg – Valognes followed by the 2nd Battalion and the 3rd Battalion on the left.

The attack was then resumed: men of the 2nd Battalion found themselves in the middle of the enemy resistance but the smell of the blood, of the smoke and the noise of the bullets plus the wooded area all around stunned them, and men got lost becoming confused. Only 69 soldiers of the 2nd Battalion were still able to continue the attack.

The 313th Infantry Regiment continued its advance toward Cherbourg meeting only light resistance.

The Germans didn’t know that the 313th Infantry Regiment was bivouacking there. The German traffic continued on the road next to them!

On that day the 313th Infantry was given the mission to continue its attack on the remaining German strongpoints before the Fortress of Cherbourg. This attack was scheduled as follows:

As scheduled the three Battalions of the 313th Infantry Regiment went into action reducing their first objective at 1000 yards in the North, but the German artillery decided to answer by firing back, forcing the troops to stop. While the men were forced to stop, additional information was received through artillery channels at 1045 hours.

The attack was postponed until 1130 hours but why? An air bombardment was going to take place at 1100 hours before the assault! As it was impossible to cancel the air attack (bombers were already in the area), the objective was bombed while the men of the 313th Infantry Regiment were on it.

Men of the Regiment had to retreat while the friendly bombs were falling all around them. Worse,  the Germans decided to increase their artillery fire. All hell was let loose!

On the 24th of June, the attack was again resumed in the same maneuver as the previous day in column of Battalions: 2nd Battalion in lead, 1st Battalion in the middle and the 3rd Battalion at the rear to envelope the Germans from the right flank.

This maneuver was successful, the Germans abandoned their positions, the American troops pushed to the high ground of Hameau Gringore (near N-13).

When the American troops entered the hamlet, three 155 mm guns and two 170mm guns with several other artillery guns were found. Around 320 prisoners of war were taken in Hameau Gringore. 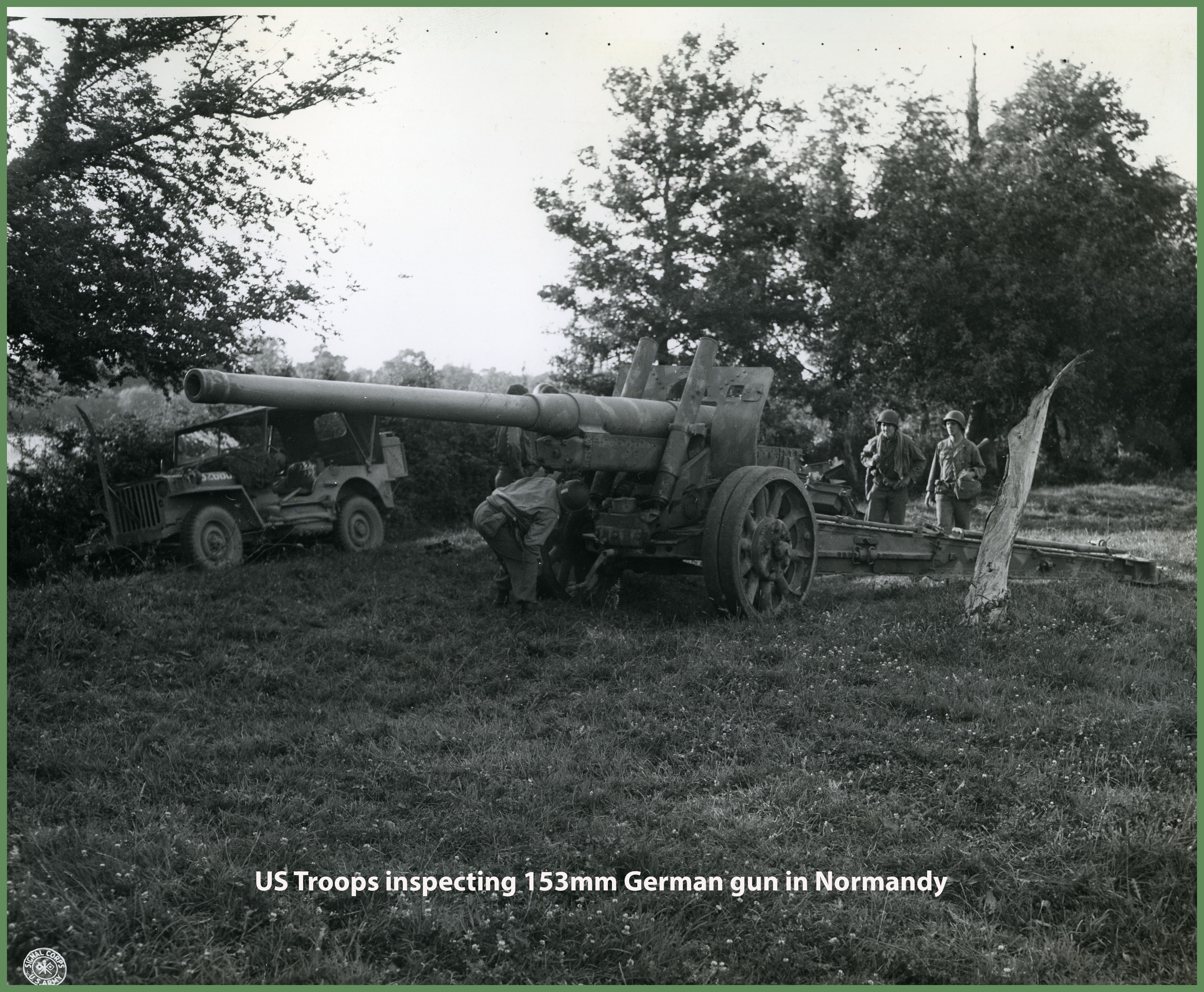 The enemy had not expected this attack. Why?  When the 313th Infantry Regiment reduced the artillery position near Hameau Gringore, numerous prisoners of war were taken but large kettles were found inside the kitchen of the enemy fortifications. They were full of beef stew and most of enemy troops were assembled probably getting ready to eat.

Beginning of the end

The morning of the 25th of June was spent in patrolling and mopping up, the Regiment moved from the high ground North of Hameau Gringore to a position just South of Cherbourg (crossroad coded 177) at 1400 hours.

The advance was still made in column of Battalions with the 2nd Battalion leading the column, followed by the 1st Battalion and the 3rd Battalion in the rear.

Upon reaching the first houses of Cherbourg, four Officer combat patrols were sent to penetrate the outskirts of the city, meeting some German opposition and taking many prisoners of war. While the rest of the 313th Infantry Regiment was waiting for the Combat patrols, a German battery located in the face of the cliff below the Fort du Roule opened fire and shelled the Regiment.

Note: Normandy American Heroes guests during the 100 days Normandy campaign have the privilege to visit the underground tunnels of Fort du Roule!

On the final day of the German occupation in Cherbourg, June, 26th, 1944, the 313th Infantry Regiment attacked its final objective, the city itself and succeeded in reaching its objective, the beach at 0800 hours.

Considerable sporadic resistance was met while passing through the streets, “A” Company of the 746th Tank Battalion provided a fire support that the infantrymen couldn’t neglect. The main opposition came from the guns below the Fort du Roule and from "Dock of Normandy" where the 1st Battalion encountered heavy resistance. The 1st Battalion was held up by four concrete pillboxes for some hours, only mortar fire, antitank guns, and two Platoons of “A” Company of the 746th Tank Battalion which fired with their 75mm guns forced the remaining Germans to surrender.

At 1830 hours, 57mm antitank guns were directed against the German guns on the cliff below Fort du Roule. Only fifteen minutes were enough to silence those guns.

Men of the Regiment captured 1128 prisoners of war on this day.

The 87th Chemical Mortar Battalion attached to the 79th Infantry Division gave/received an effective support during the Cherbourg Campaign while the men of “A” Company of the 304th Engineer Battalion built bridges across the many streams in the Cotentin Peninsula.

Company “A” of the 304th Medical Battalion was very effective in evacuating the wounded and men killed in action.

Last but not least, the fire from the guns of the 310th Field Artillery Battalion gave a support and allowed to overcome the German artillery. 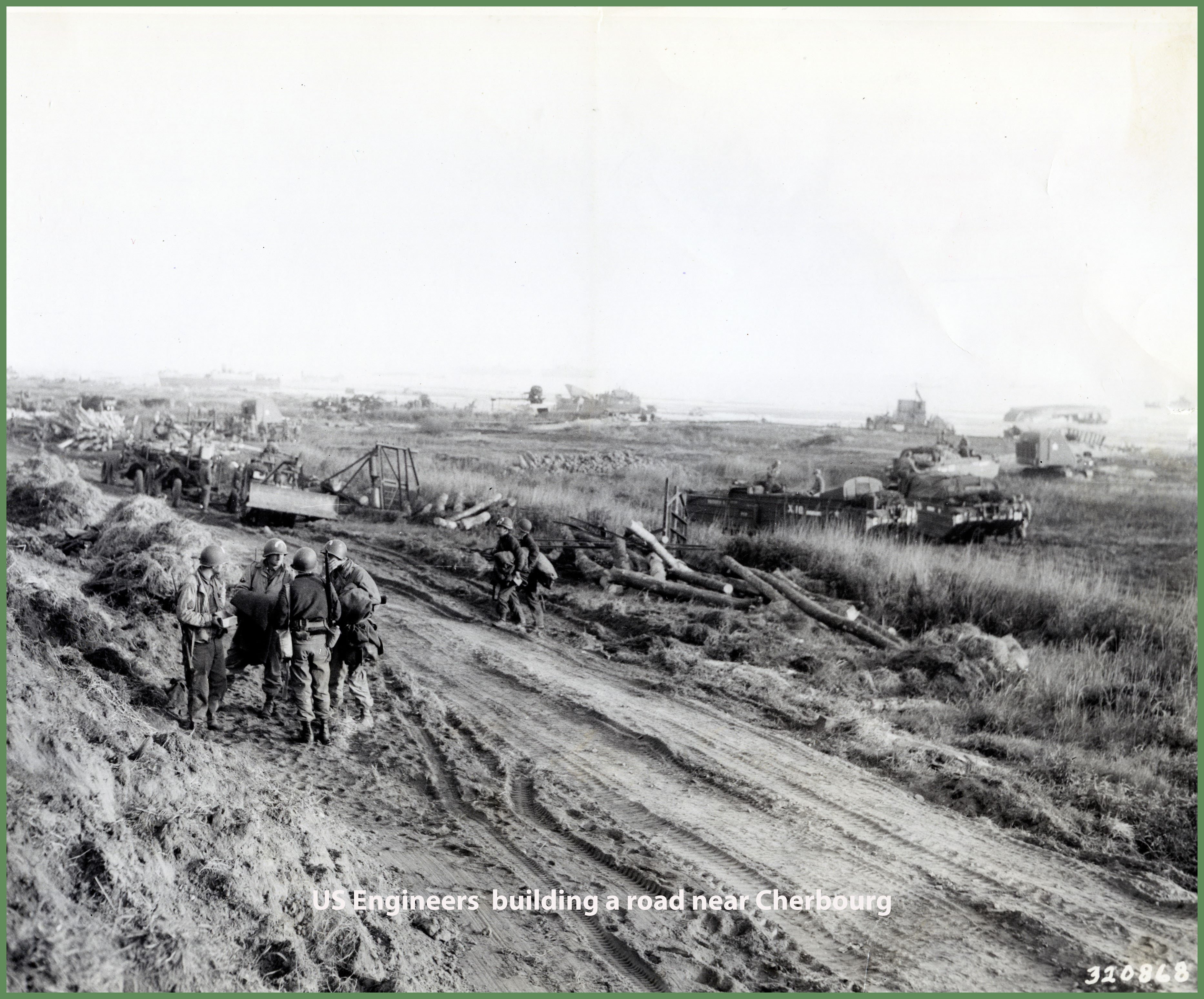 From the 19th to the 26th of June the 313th Infantry Regiment altogether captured 2240 prisoners of war.

Cherbourg Campaign came with a price! To seize the first objective of the liberation of France and Europe, the 313th Infantry Regiment  suffered 845 casualties.