Located in the Cotentin Peninsula of Normandy, the beach codenamed Utah was the second American Beach on D-Day but until December 1943, the beach was not part of the plan of the Allies Headquarters.

Located in the Cotentin Peninsula of Normandy, the beach codenamed Utah was the second American Beach on D-Day but until December 1943, the beach was not part of the plan of the Allies Headquarters.

At the time only the beach codenamed Omaha was planned, but this beach was too far away from Cherbourg and the Allies needed a harbour in deep water as quickly as possible to deploy their logistics. Utah beach would allow the Americans to cut through the Cotentin county and take Cherbourg from the land and not make the same mistake as in Dieppe (Operation Jubilee).

Initially scheduled to land in front of the WN07, WN08, WN09 and WN10 near Saint Martin de Varreville (causeway 3 and 4), the embarkations found themselves pushed south east due to the heavy waves, strong current and guiding barges that had blown up on undetected mines. Finally they will face the German Stronghold WN05 (Causeway 2) near the Hamlet of La Madeleine - WN04 and after the landing the WN03 near Pouppeville (Causeway 1).

Note: Widerstandsnest (WN) is a German Stronghold often comprised of casemates, bunkers and tobrouks - the map details all the WN along the coastline and the German Batteries inland. 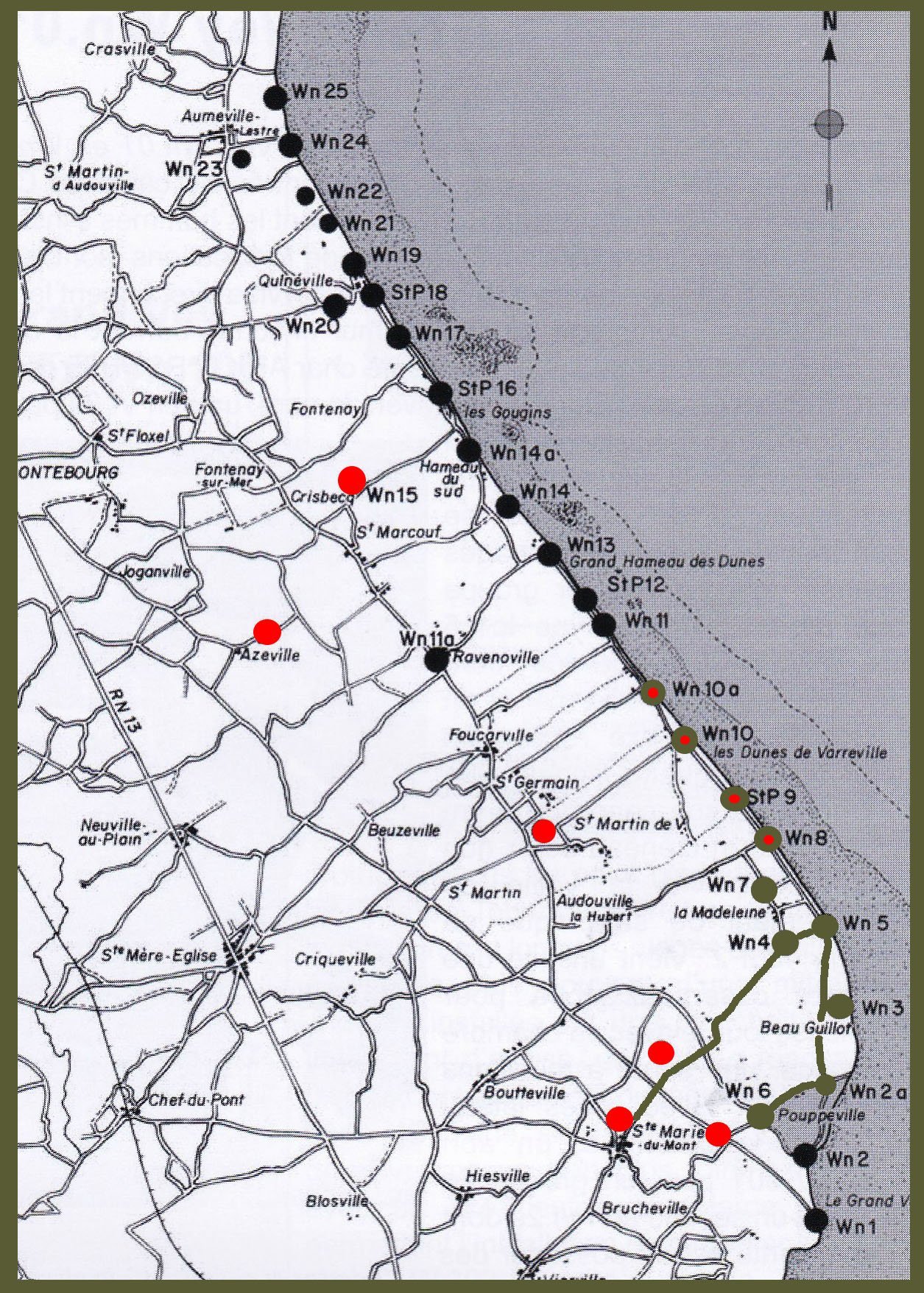 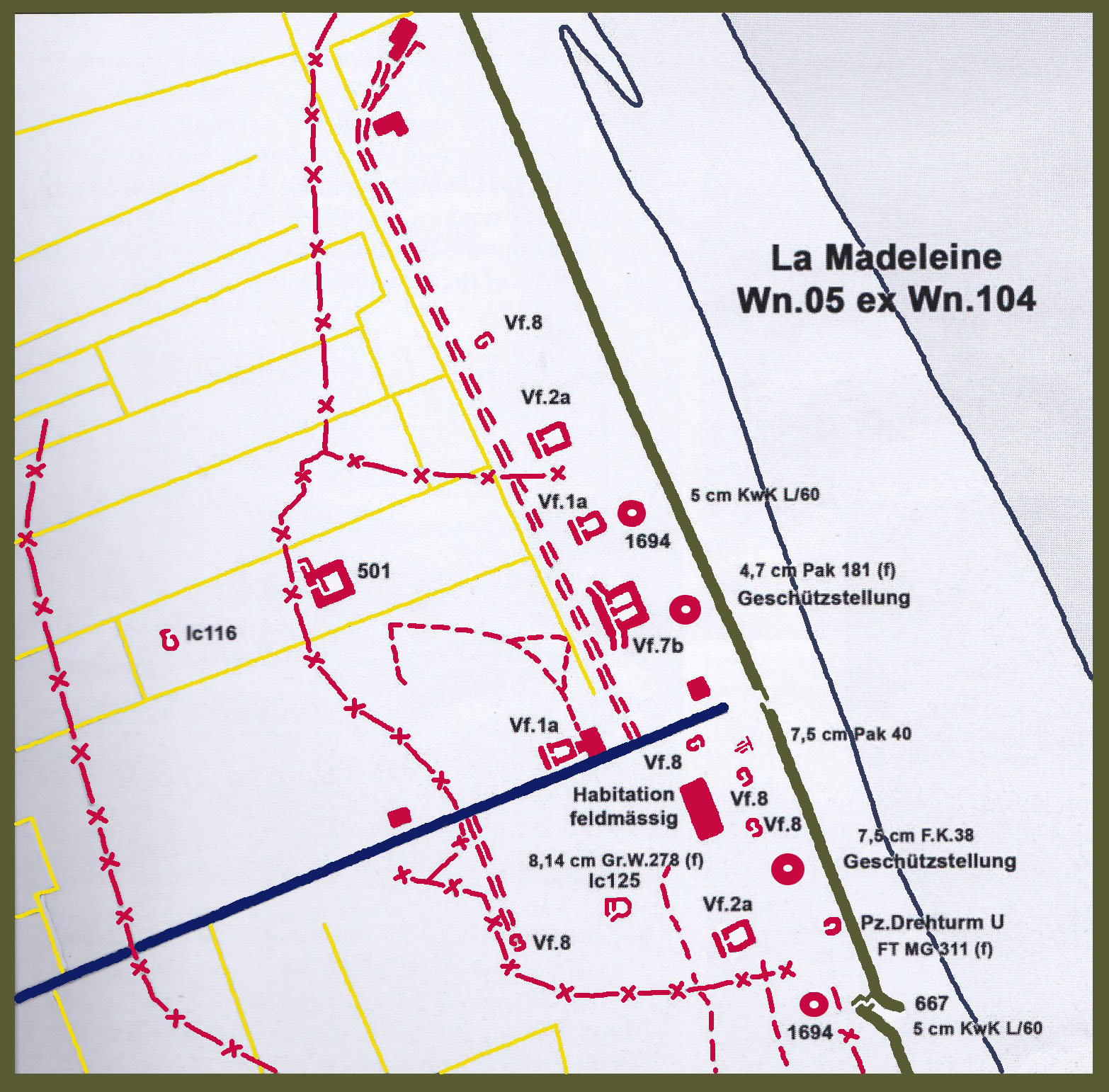 At 0530 am the battleships started to fire on the German strongpoints which were defending the beach. The men of the 1st and 2nd Battalion of the 8th Infantry were already climbing down in their landing craft when the bombardment begun and were able to watch the bombardment. Most of them were seasick but relieved to know that the German defences were being destroyed by the naval fire.

Before the landing of the troops, tanks from the 70th Tank Battalion were on their way to shore but the tanks were late and the troops of the first wave were just behind them.

The men were in good spirit and had a good morale, joking to each other. The Coxswains had to remind them not to expose themselves. When the ramps went down, some of them yelled to probably give themselves some courage and try to scare the enemy. 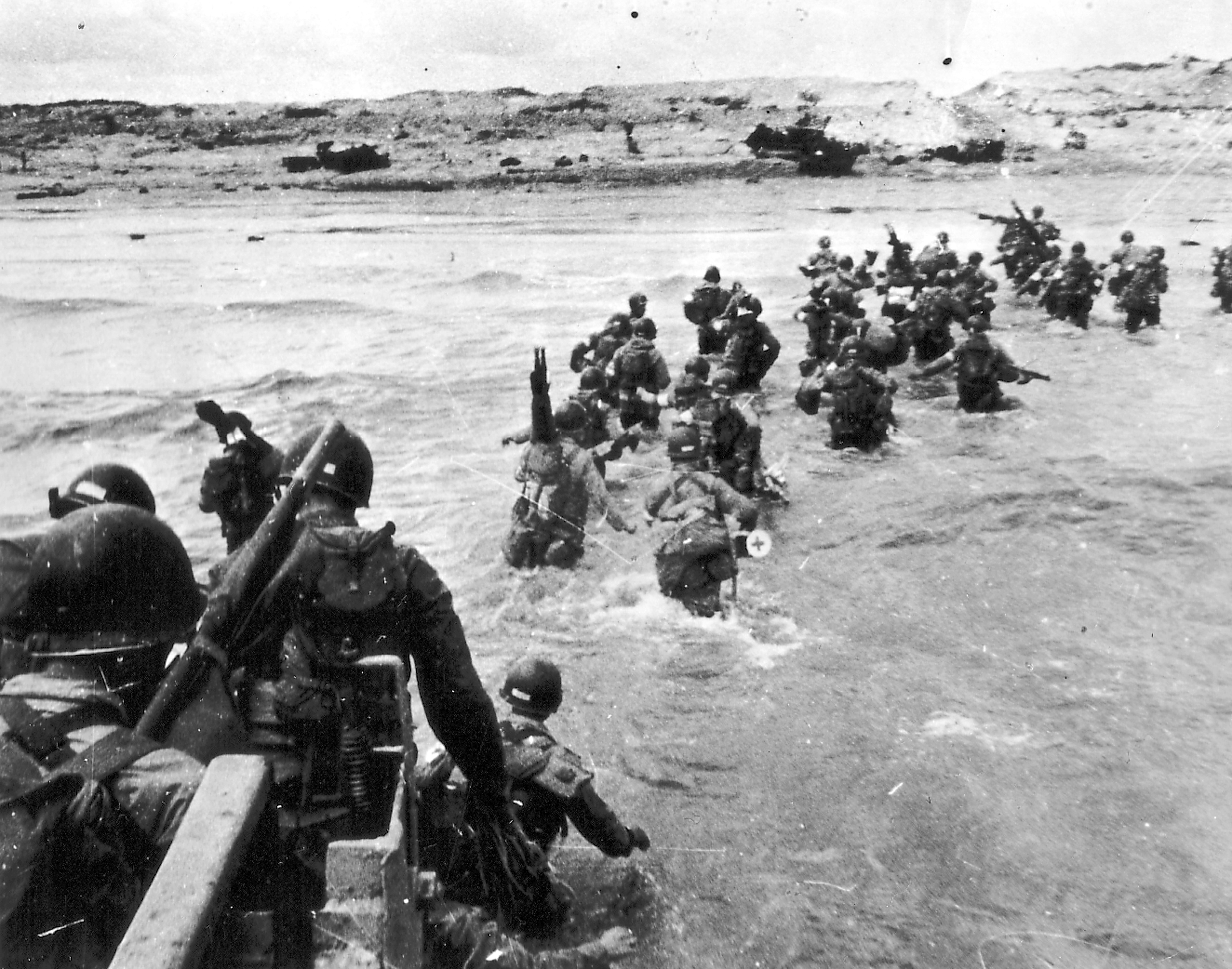 The first troops of the 4th Infantry Division to land were the men of the 8th Infantry Regiment of the 2nd Battalion at 06:30 am on “Tare Green” sector.

The boats on their rear fired on the beach trying to blow up the mines. The men had to wade, waist deep, through water before running under enemy fire on the beach.

Lieutenant C. Rebarchek of the "E" Company landed, and knew straight away that he was at the wrong place because they were no "mud" fort ahead of him.

Colonel Carlton MacNeely CO of the 2nd Battalion of the 8th Infantry landed at H+15 instead of H + 30 because he wanted to control the Duplex Drive Amphibious Tanks on the beach. The 1st Battalion was scheduled to land at the same time on “Tare Green” but was 15 minutes late.

As with Lieutenant C. Rebarchek of the 2nd Battalion, Captain Robert C. Crisson of Company “C” of the 1st Battalion knew, when he landed, that it was the wrong place for the same reason: no "mud" fort in view.

The 3rd Battalions of the 8th Infantry landed at H+75 and as for the 1st and 2nd Battalions, met only some machine gun and artillery fire on the beach. The Battalion will later proceed to the road U5 and spend the night between Sainte Mère Église and Chef du Pont. 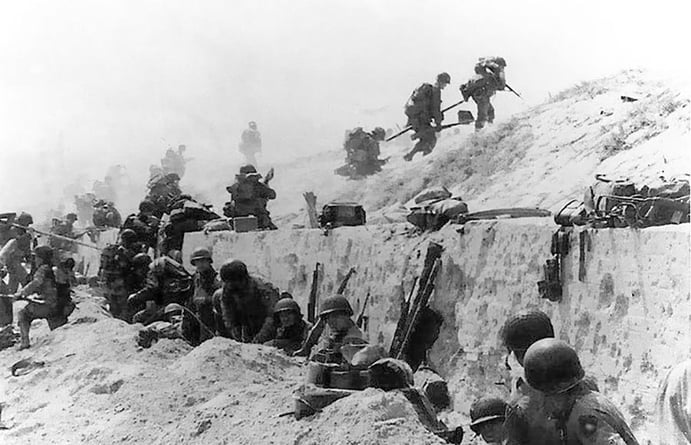 Roads T7 (Causeway 3) and U5 (Causeway 2) allowed the men of the 4th Division to move inland and to carry out the junction with the troops of the 101st Airborne and 82nd Airborne. It was vital to seize and hold them because it was the only roads available in the area.

All the swamps had been flooded by the Germans. The first vehicles arrived around 09:00 am and had to move on road U5 because road T7 was too close to the German strongpoints in the North.

From the morning to late afternoon the fields were jammed with vehicles, fortunately the German artillery which continuously fired during the day didn't hit the parking area!

At 10:00 am the men of the 1st and 2nd Battalions of the 22nd Infantry landed, but they couldn't reach their objective on road 89 because the German fire was heavy and all the swamps around them were flooded. The 3rd Battalion of the 22nd Infantry took down some strongpoints on the beach, advanced inland and silenced one of the strongholds.

The last regiment to land of the 4th Division was the 12th Infantry under the orders of Colonel Russel P. Reeder. They landed after noon, marched inland without meeting any opposition, only occasional sniper fire and bivouacked southeast of Beuzeville-au-Plain.

On D-Day this regiment will sent  a detachment led by Lieutenant Johnson to destroy an Anti Tank gun position near Beuzeville-au-Plain and then bivouacked there.