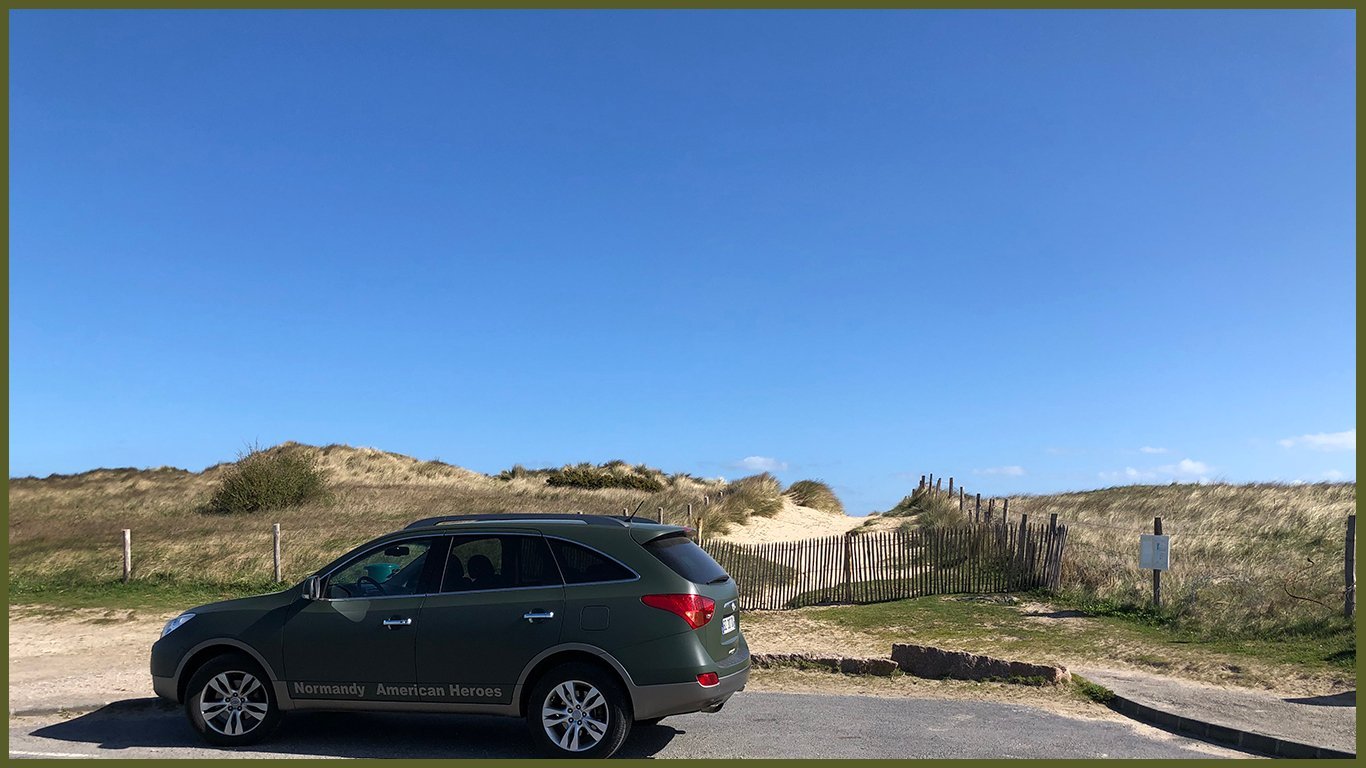 This Battalion was activated on May 22nd, 1943 at Camp Rucker, Alabama. On this day only 8 Officers and 72 enlisted men composed the 87th Chemical Mortar Battalion. This battalion saw its number of men increase every day from the 22nd of May to the 4th of  September 1943 to reach a force of 39 officers and 905 enlisted  men. Its ranks began to reduce after the 4th of September  due to many transfers of men to other units.

At Camp Rucker the men were trained to  speed march as of June 16th, 1943. The soldiers had to go from Camp Rucker to Lake Tholocco and back, a distance of 12 miles. Something terrible happened the following day, Staff Sergeant Philip Francis died as a result of sunstroke.

The training was not limited to speed march only but also to train the men to fire with machine guns or rifles as of July 23rd. The men learned to use a Springfield 30 Caliber Model 1903 rifle then on the 2nd of October started training with a M2 4.2 inch (107 mm) mortar.

From the 1st to 10th of November, maneuvers were scheduled, the elements of the 87th Chemical Mortar Battalion bivouacked 5 miles northwest of Camp Rucker. Captain Luedke, the Assistant Chemical Officer was on tour for inspections of the troops. Daily inspections were made by the officers, arms, equipment, uniforms everything was thoroughly inspected.

On January 31st, 1944 the battalion left Camp Rucker at 06:00 hours to Camp Forrest, Tennessee that it will reach on the 2nd of February 14:30 hours. Before reaching Camp Forrest, the battalion made a stop at Camp McClellan, Alabama at 17:00 hours for the night of the 31st January to the 1st of February, left it the next morning at 07:00 hours for Huntsville Arsenal, Alabama. The men left Huntsville Arsenal at 07:00 hours on February 2nd. 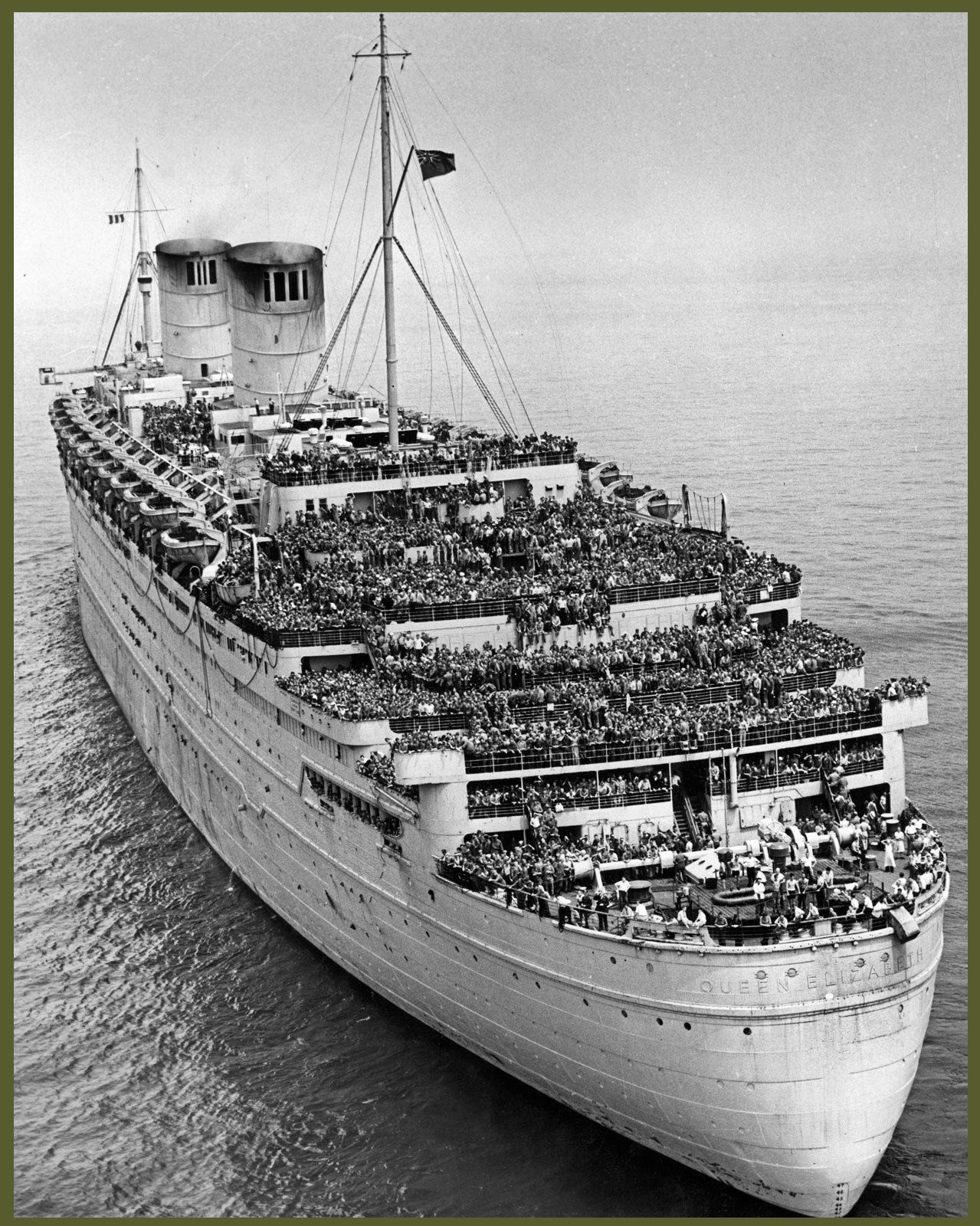 The 87th Chemical Mortar Battalion stayed at Camp Forrest for two months where they trained intensively. On the 25th of March it left for Camp Shanks, New York by train. The Battalion embarked on board of RMS Queen Elizabeth on the 31st of March and sailed for the European Theater at 01:00 hours.

RMS Queen Elizabeth anchored at Greenock, Scotland on the 7th of April 1944, the journey was pleasant, the sea was calm, the weather clear and the morale of the men excellent.

The men of the 87th Chemical Mortar Battalion were not disembarked at the same time, the first were the Headquarters, the Medical Detachment with Company “A” on the 7th of April at 08:00 hours. Companies “B”, “C” and “D” disembarked the next day.

The 87th Chemical Mortar battalion was then assigned officially to the First US Army attached to the VII Corps, 4th Infantry Division.

By the 9th of April all components of the Battalion were at  their final base, Tiverton in Devon County, England  which they reached by train.

The 87th Chemical Mortar Battalion as the other units of the First US Army trained at the Assault Training Center in preparation of the D-Day landings. It consisted of combined training in water and land operation.

They practised their rehearsal exercises at Slapton Sands. The men trained on the beach of Slapton on the 27th of April in support of the 4th Infantry Division it would follow on D-Day at Utah Beach:

D-Day initially was to take place on the 5th of June but due to bad weather conditions it was postponed, the 87th Chemical Mortar Battalion stayed aboard the LCT approximately 62 hours before the landing. The main reason being, they would not have the time to make it back to their port of origin, so circled offshore Portsmouth, the famous "Piccadilly circus" 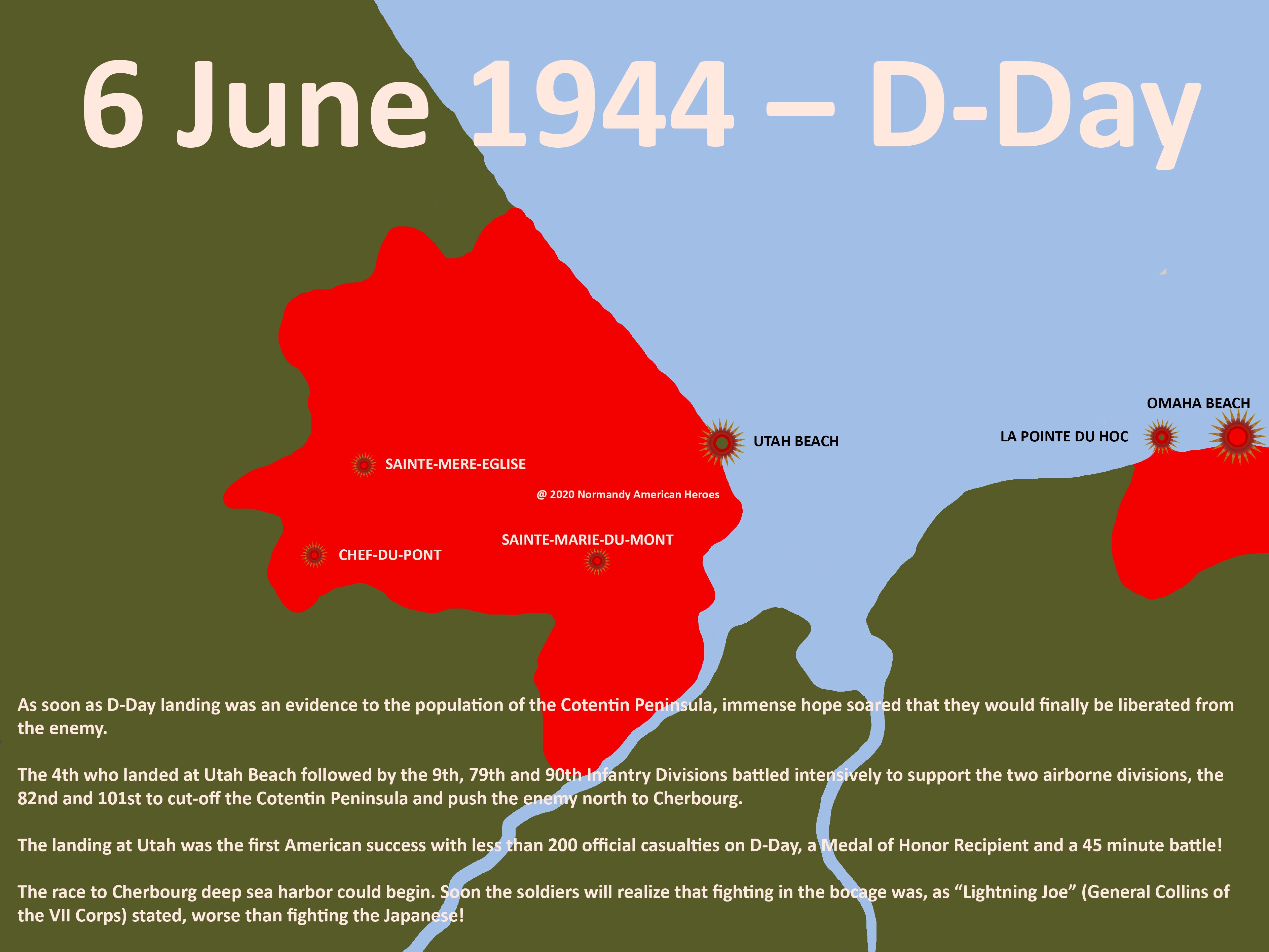 On D-Day the four Companies of the 87th Chemical Mortar Battalion were assigned to the 8th  and 22nd Infantry Regiments as follow:

The men were launched at 17000 yards off shore. During the landing, two mortars and two vehicles were lost as a result of the sinking of LCVP’s.

Forward observers from each company landed with the first waves of the infantry to prepare the support fire. As soon as the infantry men were on shore the 4.2 mortars were the principal artillery fire during the first five or six hours of the landing. They succeeded in destroying the German strongpoints and automatic weapons emplacements.  Both Headquarters (4th division and 87th Chemical Mortar Battalion) worked hand-in-hand.

The next day,  Companies “B” and “C” were still fighting with the 8th Infantry Regiment losing one officer and four men, nevertheless both companies succeeded in silencing two casemate gun positions. Company “A” was then transferred to the 12th Infantry Regiment to fight their way toward Montebourg.

On the 9th of June 1944 Company “B” was ordered to support the 101st Airborne Division to seize the city of Carentan, precisely in the taking of the bridge over the Douve River.

Company “C” still in support of the 8th Infantry Regiment fired around 1500 rounds in just two hours. The objective was to take the ridge line southwest of Montebourg.

During the night of the 9th to the 10th of June 1944, Captain Henri S. Williams, CO of Company “D” was killed in action by an enemy airplane bomb while he was going forward to some gun positions.

On the 10th of June 1944 another unit from the 87th Chemical Mortar Battalion, Company “C” was assigned  to the 101st Airborne Division in the crossing of the Douve River by firing shells to create a smoke screen. It was not attached but transferred.

Why ? Due to the losses in equipment from enemy action, it was reorganized by the Battalion Company into one Platoon of five mortars. The 87th Chemical Mortar Battalion engaged two of its companies in the battle of Carentan. Both companies heavily shelled the city of Carentan with their Howitzer guns and White phosphorus shells.

The use of White phosphorus shells had a huge psychological effect on the Germans in town, it contributed to the surrender of the defending forces. 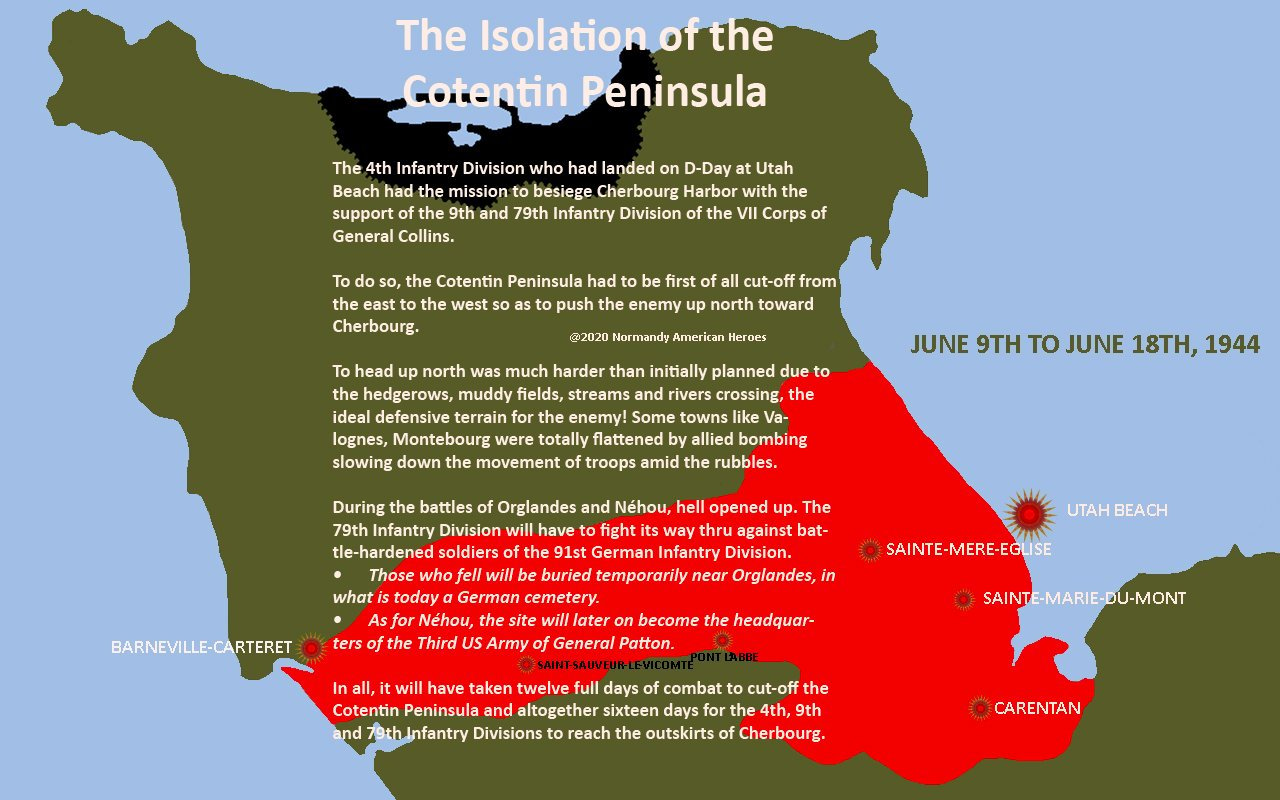 Companies “B” and “C” were relieved from the 101st Airborne Division on the 11th of June.

Only Company “B” was still attached to the 4th Infantry Division to support the 82nd Airborne Division.

From D-Day to the 15th of June the 87th Chemical Mortar Battalion fired 16860 rounds.

From the 18th of June to the surrender of the German Garrison of Cherbourg,  the 87th Chemical Mortar Battalion was deployed within the 9th, 79th and the 4th Infantry Divisions. 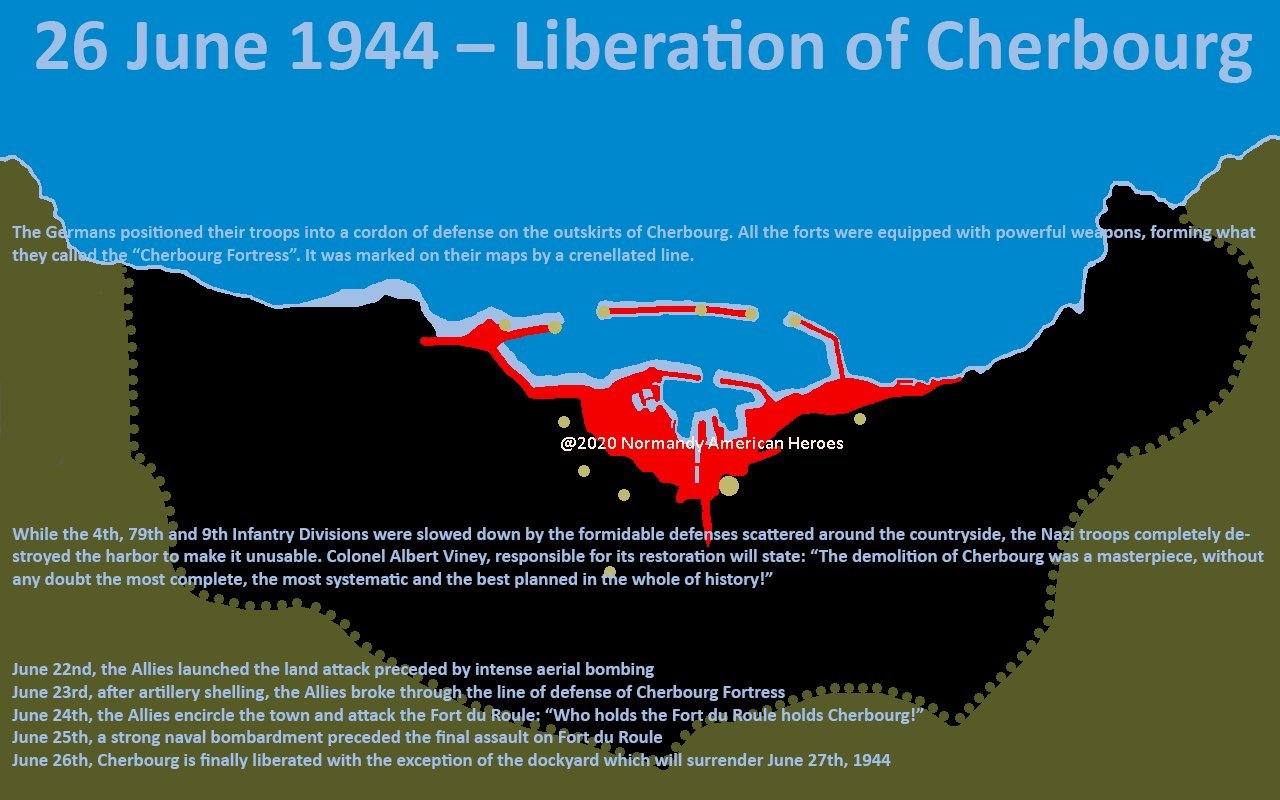 Lieutenant Murrey from Company “B” watched the Germans establishing and meticulously camouflaging a large ammunition dump. Once they finished the job, all the guns of both companies opened fire on the enemy, destroying the dump: fires and explosions lasted for several hours.

While Companies “A” and “B” were destroying the German ammunition dump, “C” and “D” Companies were attached to the 4th Infantry Division to support its advance North of Cherbourg. “D” Company supported the 22nd Infantry Regiment for the taking of the German airfield.

For the next few days, the four companies of the 87th Chemical Mortar Battalion provided an excellent heavy fire on the German pillboxes, strongpoints and machine gun nests. It allowed the infantrymen to seize their objectives and to force the remaining Germans to withdraw. The employment of the Howitzer guns and White phosphorus shells played a huge part in the taking of the town.

General Ira T. Wyche, Commanding General of the 79th Infantry Division and Colonel Kramer Thomas Chief of Staff expressed high regards and appreciation for the artillery support of Companies “A” and “B” during the advance of the division on Cherbourg.

Colonel Thomas stated that the presence of these two companies had materially effected the success and progress of the advance, especially when, on several occasions, the 4.2’s were the only available artillery support because of their rapidity of getting into position and the always availability of ammunition at the gun positions. The forward observers have done a superior job and time and again have rallied shaken and demoralized troops around them and led them forward, at the same time observing and adjusting fire for the guns behind them.

Lieutenant Murray and Lieutenant Byers had done a superior job and lived day and night on the front lines or with the outposts in order to do their job. Never a day passed where the forward observers were not forced to take part in a fire fight.

Note: General Orders N°.26, Headquarters First United States Army, dated 17th June 1944 received this date which notified the 87th Chemical Battalion that it had been cited under the provisions of Section IV, Circular N°333, WD 1943 for extraordinary heroism and outstanding performance of duty in action in the initial assault on the Northern coast of Normandy, France, 6th June 1944

The support of the 87th Chemical Mortar Battalion in the taking of Carentan, Montebourg and Cherbourg allowed the VII Corps to create a bridgehead, repulse several German counterattacks and seize a harbor in deep water.